One of the most commonly heard criticisms of the cycle of student protests that erupted in Venezuela in February 2014 is that they draw too lopsidedly from the “middle class.” In the words of the president of Venezuela, Nicolás Maduro, protesters have received “no support in poor and working-class neighborhoods.”

The claim that the protesters are “too middle class” implies a double criticism. The first is about values: The protesters are imputed to be embracing values that are somewhat elitist, or at least, unpopular among the bulk of Venezuelans, the so-called popular classes. The second is about politics: The protesters have failed to expand their political coalition. They remain circumscribed to a mere quarter of the population.

These criticisms deserve closer scrutiny. Venezuela has been classified as an “upper middle-income” country for decades. Furthermore, the government claims that the country has seen an expansion in the size of the middle class since 2004. In that case, observing that the protests are too middle class seems unworthy of note: What else would one expect from such a country? If there were going to be discontent, especially about governance issues, it would come from the middle classes. 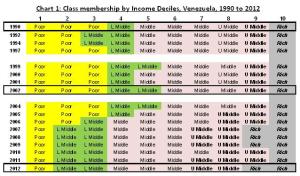 The distribution of classes today is distinct from that of previous years in which Venezuela experienced explosions of social unrest. In 1990, for instance, the year after the start of violent anti-government protests that took the lives of dozens, approximately 40 percent of Venezuelans fell in the vulnerable categories (mostly poor). As would be expected, in 1989, the majority of protesters came from low-income groups — that was a sizeable segment of the population back then. In 2001-2002, the period of heaviest unrest under President Hugo Chávez, the vulnerable population still represented between 40 and 50 percent of Venezuelan society.

But by 2012, the proportion of poor was smaller: only one decile.  Two formerly poor deciles, on average, had entered the lower middle class. One could argue that the size of the middle might have shrunk since 2012 due to the severe deterioration of the economy since 2012. But even assuming the worst economic conditions for 2013-2014, the distribution of classes in Venezuela today would not look as dismal as in the pre-2007 period.

Not everyone, of course, agrees that the middle classes have thrived in Venezuela. In fact, the expansion of the middle classes occurred during only the 2004-2006 period. Despite the continuation of the oil boom, progress in poverty reduction and middle class expansion stagnated in 2007-2012, ironically during the heyday of chavismo. And despite its mostly middle-income status, the quality of life in Venezuela is dismal due to governance failures: inflation, scarcity, crime, infrastructure dilapidation, and overall poor public sector services. A new index of “social progress,” which ranks countries according to development outcomes across social, health, and environmental factors, shows that Venezuela falls well below what you would expect given its GDP per capita.

Yet even those who contend that the official rhetoric on poverty reduction is hyperbolic and official figures opaque must still recognize that, by world standards, Venezuela is a nation of mostly middle-class people.

And in displaying middle-class-led protests, Venezuela is actually not alone. Middle classes have expanded in most middle-income countries of the developing world since 2003. That is one reason that the major protests of the last five years — in Brazil, Chile, Egypt, Iran, Russia, Thailand, Turkey, and Ukraine — have been led by middle classes. When governments falter on questions of governance and political representation, as the Venezuelan government has, the middle classes are prone to take note and take to the streets.

Furthermore, there are important factors in Venezuela depressing the incidence of protests in poor sectors. Under the ruling party’s populist model, the state has a comparative advantage in establishing links of economic dependence with individuals in vulnerable income categories. The state provides most economic goods in those neighborhoods, while simultaneously undermining the private sector’s ability to provide jobs (through anti-business regulations) and affordable retail products (by creating inflation). More, perhaps, than in other countries, Venezuela’s vulnerable segments cannot afford dissent.

And Venezuela isn’t just a populist state — it’s also a “Big Brother” state. Organized groups with direct links to the ruling party — either in the form of communal councils or paramilitary colectivos — permeate low-income neighborhoods. One of the jobs of these quasi-statist groups is to watch and punish politically incorrect behavior. During recent elections, for example, these government-sponsored groups knew which citizens had not voted and drove around to bring them to voting stations. Overall, the effects of state-dependence and state-led authoritarianism (defined in terms of the degree to which citizens depend on, and are watched by, the ruling party) are more palpable in low-income neighborhoods. This is yet another reason that low-income groups, even disaffected ones, should not be expected to be out protesting in large numbers.

For now, the student protesters have achieved a very high approval rating of 71.4 percent, according to a recent poll. Yet, one could still criticize the Venezuelan protesters for failing to establish strong ties with low-income groups. That’s a fair point. But politically, this isn’t as serious a problem as it was for protesters in 2002. Back then, the poor comprised a larger proportion of the population, and the failure of protesters to connect with the poor left them far more isolated than they are today. That is one of the reasons why those protests failed.

One could go farther and argue that it is the government, more so than the middle-class protesters, that should worry more about the political behavior of the poor this time around. Low-income groups might not be protesting, but they aren’t in the streets defending the government, either. In previous incidents like this, when the government needed political help (during the protests of 2002 and to a lesser extent 2007), it succeeded in mobilizing low-income groups to organize counter-protests. In those years, there was a larger pool of low-income Venezuelans ready to take the streets to defend the government.

Today, this pool has shrunken in size, but also perhaps in intensity of preferences. According to a recent poll, only 19.5 percent of the poorest Venezuelans would take the streets to defend the government if asked by Maduro to do so (see Chart 2). After the rich, the lowest quintile is the least likely group to go out into the streets to defend the government, far below the average for pro-government Venezuelans. It seems, therefore, that the size of passionate ordinary chavistas in low-income groups seems to be in decline. The middle class protesters might have weak ties with the poor, but the government’s ties are weak, too. 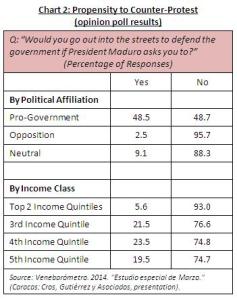 This withering relationship is one reason that colectivos have taken center stage during the current cycle of protests. In the past, Chávez could have relied on volunteers to go out into the streets to defend the government. Maduro, on the other hand, does not enjoy that loyalty. His government has to resort to paid mercenaries, rather than enthusiast supporters, to carry out counteroffensives. These colectivos, incidentally, have been documented repressing not just the protesters, but also individuals in low-income neighborhoods. No wonder disaffection in poor neighborhoods is increasing.

In conclusion, the middle-class nature of Venezuela’s protests should not be surprising. That’s the largest share of the population. In fact, when you see the economic winners protesting, you can be sure that something is going deeply wrong. This government — which claims to derive its key support from poor sectors — might want to reconsider its accusations and worry a bit more about its own fate. Reconnecting with the poor won’t be enough. Delivering better economic conditions for the middle classes won’t be enough either. To successfully pacify the country without force, the government will need to end sectarianism and address issues of governance and representation. These are the issues that middle classes, and thus the majority of Venezuelans, care about.