The general sanctioned for dealing with North Korea -- and the village he razed to build a weapons factory.

By Jeffrey Lewis, director of the East Asia Nonproliferation Program at the Middlebury Institute of International Studies, and Catherine Dill
May 9, 2014, 10:37 PM

This is Thein Htay.

He is, by all accounts, a pretty bad guy. We're sure his mother loves him, of course, but he has been sanctioned by the U.S. Treasury Department.

Although Barack Obama's administration has been engaging Myanmar's generals to facilitate the country's transition to civilian rule, they've made an exception for this guy because of his dealings with North Korea.

This is Thein Htay.

He is, by all accounts, a pretty bad guy. We’re sure his mother loves him, of course, but he has been sanctioned by the U.S. Treasury Department.

Although Barack Obama’s administration has been engaging Myanmar’s generals to facilitate the country’s transition to civilian rule, they’ve made an exception for this guy because of his dealings with North Korea.

Thein Htay controls something called the Directorate of Defense Industries (DDI) in Myanmar — a massive state enterprise alleged to comprise more than two dozen arms factories, secret overseas bank accounts, and a bustling trade with North Korea in missiles and who-knows-what-else. If Myanmar is going to make the transition to democracy, guys like this have to go. But the disturbing aspect to this story is that, despite U.S. sanctions against Thein Htay and the regime’s promises to end cooperation with North Korea, his empire is getting bigger.

But don’t take the Treasury Department’s word on whether Thein Htay is a bad guy. Ask the people who used to live in the tiny village of Lebinaing, a little hamlet near a place called Pauk. One day the army showed up, confiscated their farms, razed their village, and built a huge factory — one of more than two dozen in Thein Htay’s empire of arms factories.

You can read all about the episode in Unity Journal, a weekly publication in Myanmar whose reporters interviewed the villagers and took pictures of the facility in January 2014. Well, you could have read all about it — but Thein Htay apparently doesn’t like scrutiny. The Myanmar government quickly arrested four reporters and the CEO for violating the state secrets act and confiscated all copies of the magazine. The five journalists remain rotting in jail.

The United States has engaged Myanmar in the hopes that the country will move toward a more open society. As part of the process of relaxing military rule, loosening censorship, and releasing dissidents, Myanmar’s generals were also supposed to quit North Korea. The Obama administration has been willing to accept at face value Myanmar’s promises to end its ties with North Korea and any illicit weapons programs because U.S. officials believe that democratization will solve any nonproliferation problems, whether these involve the missile trade with North Korea or unanswered questions about Myanmar’s interest in nuclear technologies. What happened near Pauk, however, suggests that the White House is wrong. An open society can’t take root in Myanmar as long as institutions like the Directorate of Defense Industries seize people’s farms for their factories and the government arrests journalists to avoid scrutiny.

The story of what happened near Pauk is an interesting one. In February, Unity published an article based on interviews with people living near Pauk. They claimed that the site was unusual: It had very heavy security, it had been visited by senior regime figures, and it was staffed by foreign workers. And, of course, they were upset that their farms had been taken and their village destroyed. The story received international attention following the detention of the Unity journalists and the confiscation of all copies of that edition of their magazine, which contained images of the site. The government acknowledged that the facility is defense-related, and it later claimed that the facility is a standard ordnance factory of unspecified purpose.

The images as published in Unity.

Based on a single satellite image purchased by Foreign Policy, we were able to locate and analyze the facility. Its scale is surprising. It certainly doesn’t look like a standard ordnance factory. (The Center for Nonproliferation Studies has published a full analysis of how we matched the picture to the site.)

The image confirms many of the details provided by the villagers. The security perimeter, including the main gate, is formidable. There is a helipad of the sort one only sees at facilities that receive VIP visitors. And, in addition to housing constructed for Myanmar workers, there are barracks-style buildings similar to housing provided for foreign personnel at other DDI sites. Lebinaing has been demolished to clear an area around the perimeter and make room for a transformer substation.

In the left image from 2012, the village of Lebinaing is still visible. In the right January 2014 image the village has been razed.

The locals made a number of other claims that are more difficult to verify. They believe that the facility is intended to produce chemical weapons. The Unity story also reportedly quoted a local employee saying he saw “rockets” at the site. It is very difficult to identify a chemical weapons facility using only overhead imagery, but the scale of the facility and its location are certainly unlike “standard ordnance factories” seen elsewhere. It comprises five enormous warehouses, with more than 200,000 square meters of floor space.

The allegations of chemical weapons production would be easy enough to address if Myanmar were simply to make good on its promise to accede to the Chemical Weapons Convention (CWC). Myanmar signed the agreement in 1993 but has delayed bringing it (and its verification measures) into force for more than two decades. Myanmar keeps making promises: The country hosted a technical assistance delegation from the CWC’s implementing organization in February 2013, and, as recently as December, a spokesperson said that Myanmar continues making preparations to accede to the treaty. The same spokesman again repeated this promise in February in the wake of the allegations. Although it certainly does take time to prepare initial declarations and the requisite implementing legislation and institutions to abide by the CWC’s terms, Myanmar seems to be stalling. Once it accedes to the treaty, the government will have a 30-day period to declare all materials and acti
vities under the scope of the CWC. All declarations will then be subject to inspection and open to requests for clarification.

The locals also stated that the foreign workers were Chinese. Again, overhead imagery is no help unless the foreign workers bring their mothers and you image them doing qigong at the crack of dawn. But the site bears a number of startling resemblances to another DDI facility — this one near Minbu — that the United States believes is a North Korean-supplied factory that makes missiles of an unspecified type. The two facilities have identical security gates and helipads, as well as similar barracks that are not for Myanmar workers. 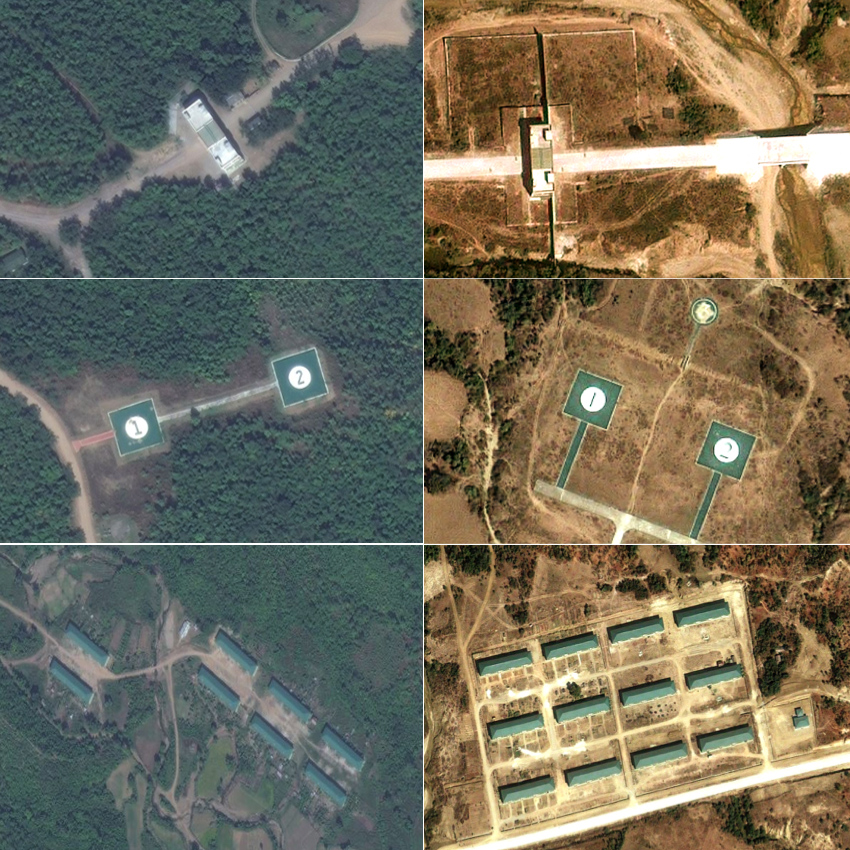 Left: A security gate, helipad and barracks at a facility near Minbu where North Korean personnel are rumored to live; Right: similar features at the site near Pauk.

There is ample evidence of ties between North Korea and the Directorate of Defense Industries. Thein Htay accompanied the head of Myanmar’s military on a visit to Pyongyang in 2008. His Korean is apparently good enough that he served as the interpreter. Thein Htay later led a delegation of Myanmar officials to Beijing to meet with North Korean officials. He reportedly maintains secret bank accounts in Singapore that fund much of his country’s trade with North Korea. It’s not hard to understand why the Treasury Department singled him out.

This cannot be what the Obama administration expected when Myanmar agreed to end its illicit programs and cut off ties to North Korea. Rather than withering, DDI is getting bigger, richer, and more powerful. And when nosy journalists poke around and interview the farmers who’ve been turned out of their homes, the entire repressive apparatus of the state descends to stop any scrutiny. This is the antithesis of a democratic, open society.

The Obama administration may have been right to defer nonproliferation concerns while working with Myanmar’s generals to transition to quasi-civilian rule. But what is clear, to us at least, is that this process is no longer sustainable without additional steps to bring Myanmar into compliance with international nonproliferation commitments and norms. A democratic society must be able to hold accountable people like Thein Htay and institutions like DDI if it is to be worthy of the name.

NEW FOR SUBSCRIBERS: Want to read more on this topic or region? Click + to receive email alerts when new stories are published on Military, Economics, Southeast Asia