Is China the Fastest-Rising Power in History?

Four graphs show how China stacks up against the powers of yesterday.

China is rising; but how far, and how fast? After the release of projections based on new World Bank data showing that China will soon overtake the United States as the world’s largest national economy, a debate has quickly ensued, with some China-watchers dismissing the new figures as an “accounting exercise” and others calling the revised data a “wake-up call.” But the hue and cry obscures a more fundamental question: whether the scale and speed of China’s ascendance is truly unique, or whether it resembles the emergence of earlier powers. China, it turns out, scores moderately on the first metric, and very highly on the second.

Although new powers have emerged for millennia — think Athens after the Greek victory over Persia in 479 B.C. and Rome in 264 B.C. at the start of its wars with Carthage — extensive data measuring the scale and speed of a nation’s rise only extend from the mid-19th century to the present. During this period, five states have emerged as global powers:

Of course, no country’s ascent had a single, undisputed starting point. But cutoffs are necessary to gauge a rise or a fall, and the above inflection points are apt candidates. Here’s how China’s shares of global GDP, trade, and military spending compare with that of the other four powers, 30 years into their respective ascents (click any image below to enlarge):

In sheer scale, China remains near the head of the pack on several measures, but it is not yet a clear front-runner. After three decades of ascent, China’s economic footprint is comparable to that of the United States in 1900. China currently accounts for 14.6 percent of world output, while the U.S. share of global GDP in 1900 was 15.9 percent. At 14.3 percent, China’s share of global commerce is about a percentage point higher than the United States’ at the same stage of its rise. Militarily, China resembles Germany before it developed the powerful navy that new wealth afforded. Thirty years in, China’s share of global military spending — 9.2 percent — is just behind Germany’s share in 1900, at 10.5 percent. Of the comparison group, the Soviet Union’s rise differs most from China’s. The USSR prioritized military strength over economic prosperity, and the numbers show it. In 1975, the Soviet Union accounted for about a third of international military spending, but only 9.4 percent of global output and a measly 3.9 percent of world trade, due to its isolation from the global economy.

Speed is where China stands out. In 30 years of ascent, starting from a low base, it has come farther, faster than any of the other rising powers in the comparison group. Here’s a look at its GDP growth, in historical context: 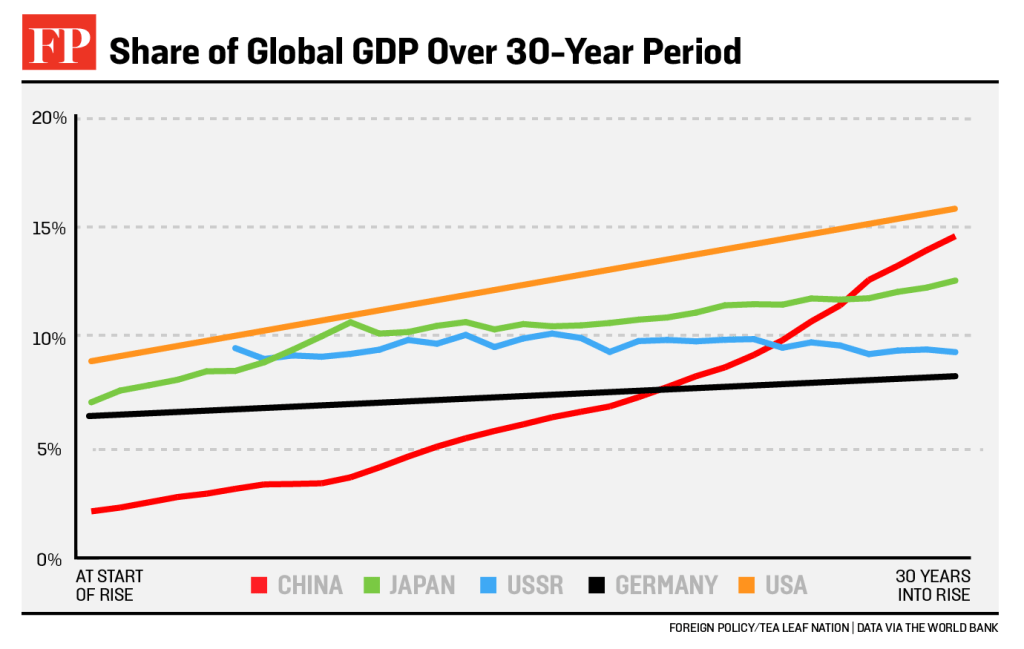 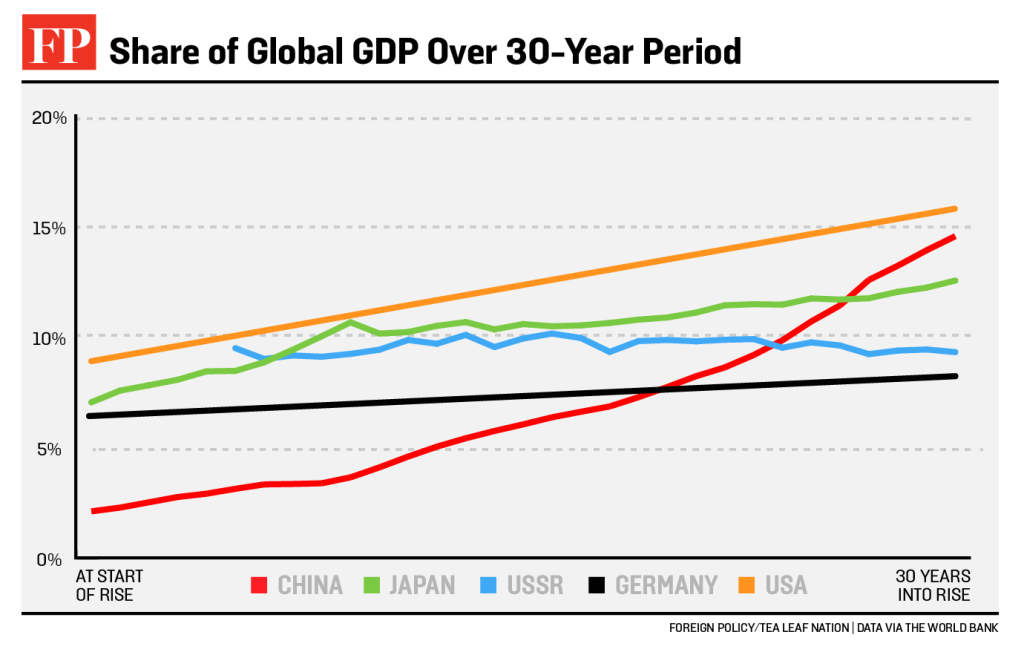 (Trend lines for Germany and the United States are interpolated due to limited GDP data. Data for the USSR’s share of global GDP begins in 1950.)

China has expanded its share of world GDP faster than any other rising state from 1870 to today. When then-leader Deng Xiaoping inaugurated a series of sweeping economic reforms in 1982, China accounted for a mere 2.2 percent of global output. Thirty years later, in 2012, China produced 14.6 percent of the world’s GDP, a roughly sevenfold increase. Notably, other powers at the start of their rise began with a much more substantial share of world GDP: 6.5 percent for Germany in 1870, 7.1 percent for Japan in 1960, 8.9 percent for the United States in 1870, and 9.6 percent for the Soviet Union in 1950. Of those four, only the United States nearly doubled its share of global output during three decades of ascent. Although considered an industrial powerhouse at the time, Germany only managed to increase its share of world GDP by a few percentage points, while the Soviet Union’s 30-year share remained virtually unchanged through 1975.

The speed of China’s ascent as a trading power is even more impressive: 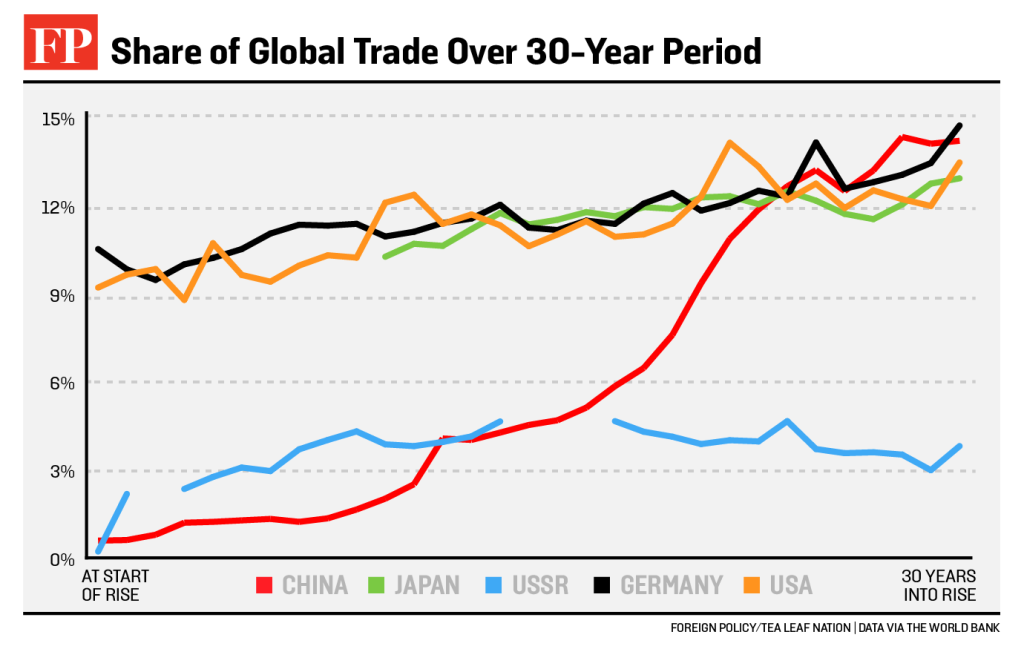 (Comparable trade data is unavailable for Japan before 1970. Gaps in the USSR trend line are where outlier data points exist without any clear historical cause.)

China’s share of global trade has exploded faster than that of any other rising power in the comparison group. In 30 years, China has expanded its share by a staggering multiple of more than 22. At the dawn of its reform period, China accounted for only 0.6 percent of world commerce; by comparison, the United States at year zero of its rise already conducted 9.3 percent of the world’s trade. Germany at the start of its ascent accounted for 10.7 percent of international commerce. Only the Soviet Union at the close of World War II had less of a presence in global trade than China at the outset of its rise.

A different picture emerges when examining the speed of China’s military ascent. In line with Deng’s belief that China should “hide [its] capacities” and “bide [its] time” — which meant, in part, getting rich first before building up its military — China’s share of world arms spending has advanced slower than its share of global GDP and trade: 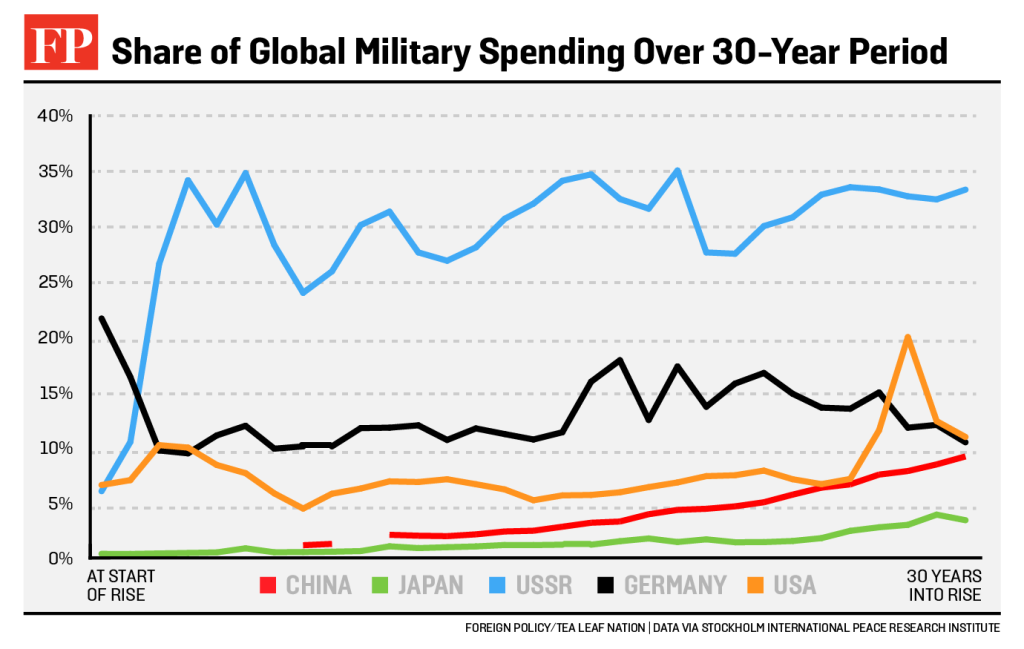 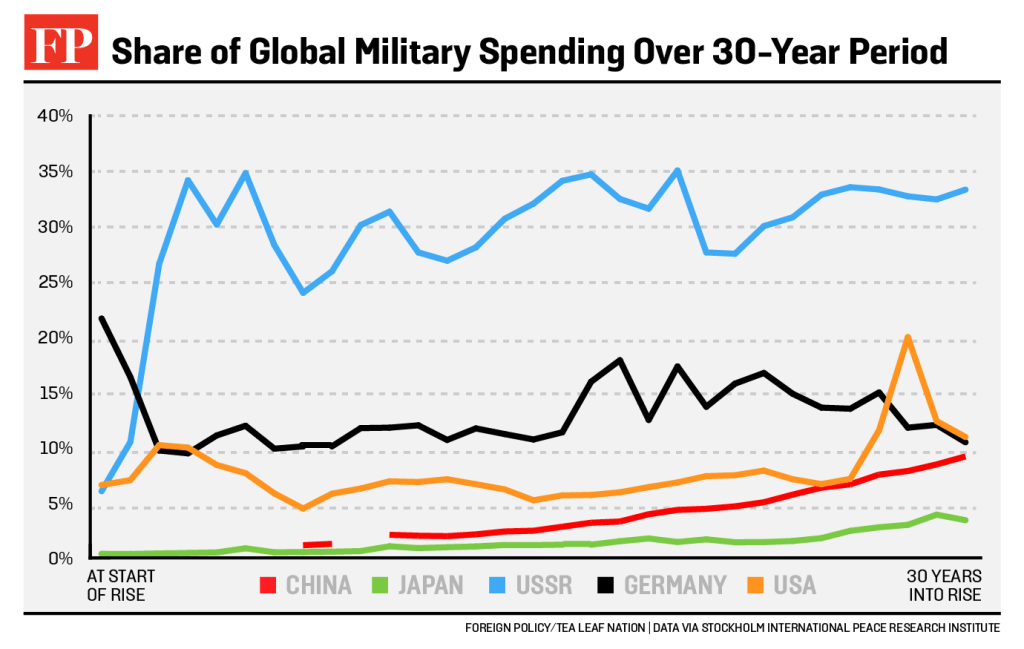 (No comparable data is available for Chinese military expenditures before 1989, or for 1991.)

China’s proportion of world military spending has expanded at an objectively rapid clip, even if it has not ballooned as fast as its economic footprint. During the 1990s, and then again during the 2000s, China nearly tripled its share of global military outlays. Pentagon data on China’s military spending paints a similar picture, and its 2013 white paper to the U.S. Congress notes that China has the “fiscal strength and political will to support defense spending growth at comparable levels” in the future, though given that “China’s published military budget omits several major categories of expenditure,” including foreign arms purchases, it’s hard to know for sure. The Defense Department estimated that China’s total military-related expenditures for 2012 fell between $135 billion and $215 billion, though it cautioned that it didn’t know for sure. The next Pentagon white paper is scheduled to be released next week.

China has risen faster than other powers, but not farther — yet. Prediction is a risky business. A decline in China’s working-age population, widespread environmental degradation, endemic corruption, and risks associated with staggering income inequality — or some combination of those factors — could slow or derail the country’s rise. But if China can muddle through, conservative estimates put its share of global GDP at 28 percent by 2030. If this forecast is correct, China’s economic dominance will, on paper, equal that of the United States in 1951, a peak year in which the residual devastation wrought by World War II significantly boosted America’s share of global output.

Yet China will likely punch below its weight even if these forecasts prove accurate. It took the United States two world wars, a sea change in how the U.S. public viewed the world, and the creation of a new international order backed by a set of military alliances to fully translate its size into global dominance. China’s economy may become larger than the United States’ this year, but parity on paper will not quickly yield equal influence abroad.

As Modi’s BJP Stalls, Can the Congress Party Rev Up?