What Russia Could Look Like in 2035, if Putin Gets His Wish

But it may be that Russia has plans for these unruly and ungrateful neighbors. A series of maps — first published by the Moscow-based newspaper Express Gazeta in July 2012, well before the outbreak of the current Ukrainian crisis — has recently resurfaced, and the maps appear to reveal Moscow’s ultimate designs in Ukraine and Russia’s near abroad. By 2035, Russia will not only have annexed Crimea (check!) and the Donbass region in eastern Ukraine, currently hotly contested between forces loyal to Kiev and pro-Russian insurgents. The Kremlin will have also absorbed the tsarist-era territories of “New Russia” in southern Ukraine, linking up with Transnistria, the eastern sliver of Moldova loyal to Moscow, and thereby cutting off Kiev’s access to the Black Sea.

Instead, the map should be read as a cartographic illustration of Russian wish fulfillment, reflecting the hopes and frustrations of at least a small segment of Russian public opinion. Some in Russia, the map seems to say, hope Europe in 2035 looks fragmented, is increasingly Islamized, and suffers under a resurgent Germany. None of this would happen, the article hints, if Russia were still the superpower it was before the 1991 Soviet collapse.

In his 1899 book, The Interpretation of Dreams, Sigmund Freud defined wish fulfillment as the satisfaction of repressed desires through unconscious thought processes such as dreams, daydreams, and hallucinations. This map is the daydream of a Russia frustrated with its diminished place in the world, exacting satisfaction from its European neighbors by acting out its geopolitical fantasies. 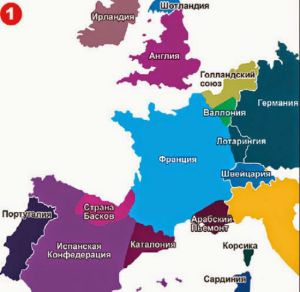 In an attitude that hasn’t really changed since communism, and perhaps has been amplified by anti-Western resentment since the end of the Soviet Union, Russia sees Western Europe as morally and economically bankrupt — decadent and near collapse. Hence the breakup of almost all major European states, starting with Great Britain. After Scotland chooses independence in the 2013 referendum, Northern Ireland feels the pull of the Republic and joins a united Ireland, effectively reducing the United Kingdom to England and Wales.

According to Express Gazeta, the recent economic crisis has sped up the decentralization of Spain, which will see Catalonia and the Basque Country split off, leaving the rest of Spain to cohabitate in a Spanish Confederacy.

Neighboring France loses some territory to the Basques, but the main story is the “multicultural collapse” due to the failure to assimilate the “wild people of color” — immigrants from France’s former colonies. The map suggests that the situation will get worse to the point that the French government will have to deport ethnic minorities to an area in its southeast called “Arab Piedmont” — an Islamic foothold, presumably with Marseille as its capital. (For good measure, Corsica goes it alone, and Germany reannexes Alsace and Lorraine.)

Belgium is also a goner, split along ethnic-linguistic lines. The Flemish in the north join with the Netherlands in a Dutch Union, but the map ungenerously keeps French-speaking Wallonia out of French hands.

Italy also splits in two, along economic lines: the Northern League controls the country to about the Tuscany-Lazio border. Rome is part of South Italy, which is too poor to prevent the secession of Sardinia and Sicily.

Bosnia-Herzegovina — a product of U.S. diplomacy — is wiped out, divided between Croatia and Serbia. In compensation, Turkey obtains the enlargement of (mainly Muslim) Albania with Kosovo, and adjacent parts of Serbia and Macedonia, creating a Greater Albania. Revanchist Hungary is finally able to regain some of the territory it lost after the fall of the Austro-Hungarian Empire in 1918, and it reannexes Vojvodina from Serbia and part of Transylvania from Romania.

But poor Poland. Once a firm Slavic friend, then a staunch communist ally, now a wannabe Westie, Poland is punished for its disloyalty to Mother Russia by dismemberment. In the west, Germany reclaims coastal Pomerania and inland Silesia. Berlin even reabsorbs East Prussia, forcing Russia itself to abandon the northern half of that territory. It seems strange that Russia would willingly part with its westernmost territory, but the point being made takes precedence over the sacredness of Russia’s borders: to drive home to Warsaw the foolishness of stepping out from under Russia’s protective umbrella.

Last for this part of Europe — and also least — a tiny fragment of western Ukraine declares independence. Once the easternmost part of Czechoslovakia, Subcarpathian Ruthenia had the distinction of being independent for a single day before Hungary overran it in the run-up to World War II. Perhaps this is where Andy Warhol, an ethnic Ruthenian, got his concept of “Fifteen minutes of fame”?

A disintegrating European Union enables Russia to wrest control of Russian-majority areas from the Baltic states. Estonia loses the Narva District, an area surrounding the mainly ethnic-Russian town of Narva, and Latvia loses the Dvinsk Region, around the small city of Daugavpils. And Moscow subordinates Belarus into a region of Russia.

Like Poland, Ukraine is punished for its Western sins: Not only does Russia annex its east and south, but its west splits off as independent Galicia (which even manages to grab an eastern corner of Poland).

To compensate for the loss of Transylvania to Hungary, Romania gets Moldova — except for the part that goes to Russia. Bulgaria, which has been fleeing from its traditional place by Russia’s side into the embrace of Brussels — is punished by Turkey’s chomping off of an area around the Bulgarian port city of Burgas, to accommodate Bulgaria’s Turkish minority.

What does Russian wish fulfillment look like in the Caucasus? Strangely, the region’s northeast sees the emergence of a Caucasian Emirate. Perhaps this is a strategic retreat, minimizing the loss of territory and the spread of Islamist separatism to Chechnya, Ingushetia, and Dagestan.

Georgia also pays the price for standing up to Russia and cozying up to the West: Russia straight out annexes the renegad
e province of Abkhazia — and that’s if the Georgians agree to play nice, because on this map they regain control over South Ossetia, that other Russian protectorate on their soil. But that’s not the end of Georgia’s troubles. To establish a lifeline to its ally Armenia, Russia extorts a corridor straight across Georgian territory, de facto dividing it into West Georgia and Kakheti.

The Express Gazeta article wisely includes the caveat that “not everything” on this map will happen exactly as predicted. Of course that’s true; but it’s also a bit disingenuous. Humans are conditioned to trust maps. This cartographic fantasy panders to Russia’s foreign-policy frustrations by predicting future defeats for its “enemies” and future victories for itself. If 2035 might seem a long time to wait, that too is par for the course: Predictions gain traction the further into the future they’re placed.

Laugh if you want. However ludicrous this map might seem now, compared with the way things looked back in 2012, the situation on the ground sure seems to be moving in this direction.