The Road Not Traveled

Zambia has one of the fastest-growing economies in the world, yet its health-care system remains desperate. How this landlocked country survives on one doctor for every 23,000 people.

KATETE, Zambia — Last summer, when 8-year-old Enock Mwale showed surgeon Goran Jovic his scars from a fire that mutilated his left hand, it was the first time he had ever seen a doctor. The problem, however, was not just the child’s immobile hand, his fingers scarred together in a near fist — the real issue was that the accident had happened some two years before.

“We’re in forgotten land,” said his mother, Phiri Banda, from a village on the eastern outskirts of the country. If Katete is remote, Banda’s village on the edge of the district is almost completely off the grid, with many stuck lingering on the roadless margins.

So the pallid pair only had one option: traveling a grueling 10 hours, by foot and a string of rickety buses, to St. Francis Hospital in Katete, eastern Zambia, to see Jovic, one of the only burn doctors and reconstructive surgeons in southern Africa.

“Do you know how many Enocks and Phiris there are?” asked the Serbian-born doctor, as he combed through his supply kit. “More than half this country is trapped in the middle of nowhere, without a road in sight.”

After operating on seven patients in 24 hours, he reached for the second-most vital kit that accompanies him on all countryside visits: his pilot’s gear. And then he flew back to the capital Lusaka, where he is based.

“If we can’t drive to them,” he said, hopping into a small plane to cut an 11-hour trip by wobbly road down to two, “then we’ll fly to them. It’s the only way.”

Though Zambia is one of the fastest-growing economies in the world, its GDP growth has yet to trickle down to the two-thirds of Zambians like Banda, who live without electricity and struggle to make ends meet on less than $2 a day. These inequities are highlighted by a health-care system that is choked by a dearth of health workers: There is one doctor for every 23,000 people in the country. Contrast that with the United States, where that number is roughly one for every 413 people. The problems facing Zambia are from another century. And until basic infrastructural deficits are addressed, meaningful progress will remain elusive, with children like Enock left in the dust.

The inability to simply get around is a huge obstacle to progress in Zambia. Roads are rarely paved, and bus rides from the provinces to the capital, Lusaka, usually take up to 12 hours. The only alternative: expensive flights, costing a few hundred dollars, servicing the rarefied business elite and a smattering of tourists visiting Victoria Falls, the largest waterfall in the world. For the country as a whole, the average distance to a hospital is roughly 53 miles.

Adding to Zambia’s health-care woes is a staggering surgical-care deficit. The country is about three times the size of the United Kingdom and just slightly larger than Texas, but there are only 44 surgeons for a country of 13 million. And only six of them are located in rural areas, where 60 percent of Zambians live. Those numbers dictate hardship for a country where the average life expectancy is around 48. The country ranked 163 out of 187 countries on the 2013 United Nations Human Development Index.

But the health-care landscape isn’t completely bleak. There have been impressive advances in the well-funded areas of malaria prevention and tuberculosis treatment, courtesy of groups like the Bill & Melinda Gates Foundation and The Global Fund to Fight AIDS, Tuberculosis and Malaria. Such advances, however, are often eclipsed by this nation’s woeful lack of infrastructure, preventing doctors from accessing certain communities. Malaria nets are inarguably beneficial, but if there aren’t proper roads or transportation systems to connect millions of people in a deeply centralized society, is such aid missing the point?

The answer began to crystallize in July 2013, when I spent time with Jovic and his colleague, British surgeon John Jellis. Thirty-one years ago, Jellis became frustrated with the incongruous distribution of health care in Zambia. “When you come across a sick Zambian, it’s precisely like telling a shoe repairman in east London that he has to fly, or in most cases — walk and drive — to Rome to get proper medical treatment,” Jellis said. “It makes no sense…. It’s mad.” 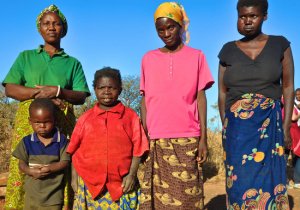 Patients traveled hundreds of miles to see a renowned traditional healer in southern Zambia. Mildred Minga (far right), 34, has a severe infection and inflammation of the jaw, which doctors say likely started as a cavity years ago. Photo by Lauren Bohn.

Tired of waiting for the state to bridge the gaps, Jellis got his pilot’s license, bought a plane, and started FlySpec (Fly Specialist), the only orthopedic, plastic, and reconstructive service that reaches patients in the most remote areas of the country. But by the time he and staff travel to far-flung hospitals and clinics, cases are often long-neglected and advanced. Jellis, now retired, oversees a team of seven surgeons, including Govic and four Zambian doctors.

In 2013, his team tended to 4,869 patients and performed 1,511 operations. By June 2014, they had already flown 72 hours, seen over 1,800 patients, and performed more than 480 operations, at the cost of roughly $200 a patient. But funding isn’t easy. In fact, the organization hasn’t had much luck with nailing down grant money, and is now financed entirely by charitable donations. Jellis and his medical staff often support themselves through fellowships from foundations such as ReSurge International, which is based in California.

Due to a drop of about $50,000 in donor funding this year, they’ve cut fuel costs and no longer travel to three of the most distant sites in Zambia’s impoverished north.

While Zambia suffers from a brain drain — its doctors often leave to practice in the West — the even more crucial challenge is encouraging Zambia’s Lusaka-centric talent to tend to the disenfranchised countryside, said James Munthali, head of the Department of Surgery and Orthopedics at University Teaching Hospital in Lusaka.

“It’s disappointing we’re still at this point 40 years after independence,” he said, returning from a trip to the north where he saw 84 patients in just one day.

“If you have to charter planes to reach the majority of Zambians, you know something is wrong,” he said. “Most of Zambia and the rest of Africa needs the type of help we’re not getting: more roads, more surgeons … infrastructure, infrastructure.”

But in the world of global health development, these are tough sells. Infrastructural changes require political will and reliable governance — tall orders in a country that struggles to muster either.

“Why would organizations donate to treat thousands when they could treat millions with simple malaria nets?” Jovic reasons against his own life mission. “It comes down to economics, but there’s a lethal surgery deficit in the developing world. It’s at a dire crisis point in countries like Zambia.”

Kendra Bowman, chief resident in the Department of Surgery at Brigham and Women’s Hospital in Boston, traveled to more than 100 surgical centers in Zambia in 2012 to conduct an assessment of this deficit.

Bowman says there’s a high ratio of global health funds flowing into Zambia to treat specific diseases like malaria and tuberculosis, but that surgical care continues to fall by the wayside even though the World Health Organization estimates that 11 percent of the global disease burden can be treated by surgery. Still, the poorest third of the world’s population receive only 3.5 percent of the world’s surgical procedures.

According to global health advocates Paul Farmer and Jim Yong Kim (now the president of the World Bank), surgery remains “the neglected stepchild of global public health.” In their writing, they’ve advocated for the prioritization of surgery, and “building or rebuilding infrastructure in the public sector, since a strong public sector is the only guarantor of access to health care as a right.”

Robert Bleichrodt, head of surgical care at St. Francis Hospital, says funders and the development community fail to focus on building infrastructure and providing the basics — like functioning equipment and, more crucially, training for staff on how to use such equipment. The 350-bed hospital in Katete is the only one in a district of 200,000 people — and accepts referrals from a larger rural area of 1.4 million, many of whom struggle to find transportation to the hospital.

It’s a point Dayo Olopade explores in her new book, The Bright Continent: Breaking Rules and Making Change in Modern Africa: Aid is rarely about aid, but about project design. And money often matters less than design. Most development projects and goals throughout the continent, she writes, distort progress in the broader system. As a result, malaria aid money is for malaria only, and HIV treatment is similarly siloed, ultimately undermining “the interconnected nature of progress everywhere.”

For example, in far-out provinces where the roads are relatively navigable but where cars, let alone ambulances, are hard to come by, the NGO Plan International started a “Zambulance” to transport patients to clinics and hospitals. Riders for Health is another NGO that works in Zambia to provide transportation (often motorcycles) for medical workers in remote areas. There are also efforts to turn Zambia’s thousands of volunteer community-health workers, who are sometimes trained to perform simple surgical procedures, into salaried “community-health assistants.”

“You need simple solutions,” said John Spurrier, an American physician who works at the Macha Mission Hospital in southern Zambia. A road from the hospital, leading to the nearest major city, was paved in 2011, cutting a six-hour trip in half. “Otherwise, you’re giving a person with cancer a nose job.”

Back in Lusaka, Jellis sits with his determined team of frequent-flyer doctors, strategizing how the cash-strapped charity can reach more Zambians. For him, 30 years of giant setbacks and small wins can be summed up by a recent encounter with one of his patients.

“A woman came up to me the other day…. I met her some 20 years ago and fixed a debilitating genetic defect on her feet,” he said. “I remembered her because the defect was so horrific.” Next to her, he said, was a little girl — her daughter — with the same exact defect. When the woman heard Jellis was coming to town, they traveled hours by bus and, in wrenching irony, by foot to see him.”So in 20 years, it’s still the same…. You feel like you’re working in the 19th century,” he said. A poster in the background hovers over him, counseling, “One Day at a Time.” He likes to think he and his team are helping, he said. “But at the end of the day, the impression we leave is really no bigger than a fly’s speck.”

The reporting in this article was made possible through a 2013 International Reporting Project fellowship to Zambia.