Hey Beijing, Is that a Map in Your Pocket?

On June 23, Chinese authorities unveiled a new vertical map that includes most of the South China Sea, claims which at least four Southeast Asian nations hotly dispute. It’s a strong move, yet it has Chinese web users stifling a laugh.

China’s penetration of the South China Sea has only deepened in recent months; the stationing of a Chinese oil rig near the Spratly Islands in May spurred bloody nationalist riots in Vietnam, which also claims the islands. Since early 2014, China has also begun constructing islands on several small reefs in parts of the South China Sea; the Philippines, which also claims the reefs, has twice filed formal complaints with China.

Chinese Foreign Ministry spokesperson Hua Chunying stated in a June 25 press conference that there is “no need for excessive interpretation,” since the map does not indicate “any change whatsoever” in China’s stance towards the South China Sea. In other words, it’s not a big deal.

It may not be very big, but it’s the shape, not the size, that has captured the attention of Chinese netizens. One author and social commentator posted on Weibo, a Chinese microblogging site, that the new map of China no longer resembles a rooster — the standard description taught to Chinese children in school — and queried, with seeming innocence, what the map looks like now. With language careful not to attract the attention of porn-wary censors, Weibo users speculated on whether it looked like an eagle, a map of Africa, or a certain male organ that had one exclaim, “It’s a boy!”

And here’s the new one:

Now here it is after Chinese netizens got their hands on it: 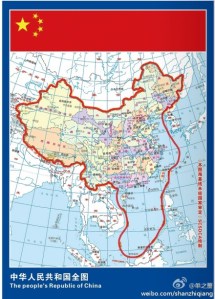 Here’s a compelling argument it actually resembles an elephant:

It’s admittedly a bit of a stretch. But with tensions in the seas around China continuing to roil, a bit of humor can’t possibly hurt.