The Case Against Vladimir Putin

The White House's indictment for the MH17 shoot-down relies on secret satellite photos and intercepted phone calls -- but also on Twitter and YouTube.

In brief remarks at the White House Monday morning, President Barack Obama pressed his case that the government of Russian President Vladimir Putin armed and trained the pro-Russian separatists responsible for downing Malaysia Airlines Flight 17 and needed to force the rebels to provide access to the crash site in war-torn eastern Ukraine.

In laying out the administration’s indictment against Moscow, Obama and key members of his national security team have been pulling from a trove of classified intelligence. Among the most incriminating evidence against the separatists are images taken by U.S. spy satellites showing a plume of smoke rising from the separatist-held area where the missile was fired, officials said. The missile also was detected by the Defense Support Program, a constellation of Air Force reconnaissance satellites that sense the infrared signature of ballistic missile launches and nuclear explosions, Reuters reported. The satellites were used during the 1990-1991 Gulf War to detect Scud missile launches from Iraq and to warn civilians in Israel and Saudi Arabia of incoming strikes.

But officials are also building their case against Putin with a mounting pile of evidence posted on social media, including posts by separatist leaders, tweets about the location of missile launchers, and YouTube videos documenting potentially incriminating conversations between the men who may have shot down the jetliner. Washington’s willingness to use Twitter and the Russian equivalent of Facebook to bolster its case against Putin is a signal moment in the history of social media, which is now taking its place alongside classified intelligence as an important source of information for world leaders.

Appearing on ABC’s This Week on Sunday, July 20, Secretary of State John Kerry cited a Twitter post by a rebel leader as one of the central pieces of evidence in making the case against the separatists and their patrons in Russia. “We know to a fact that the separatists bragged on the social media immediately afterwards about the shoot-down,” he said, adding that the rebels quickly removed the posts when they realized it was a civilian airliner that had gone down.

Kerry was referring to Igor Strelkov, a separatist leader, who wrote on VKontakte, a Russian social media site, that his forces had downed a Ukrainian transport jet in the same area where MH17 crashed. After it emerged that a civilian jet had gone down, he deleted the post. No Ukrainian transport jets were reported shot down that day, July 17. Strelkov had offered the first compelling piece of evidence that separatists had unintentionally destroyed the civilian airliner, killing all 298 people aboard, and that they intended to cover up their involvement. 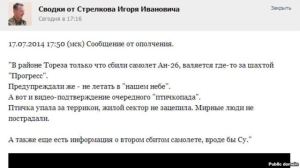 In the immediate aftermath of the shoot-down, social media became the go-to source for both government officials and members of the general public who were trying to piece together when and how Flight 17 was taken down. Hours after the crash, the SBU, Ukraine’s main security service, posted on YouTube a series of telephone calls between what it described as pro-Russian separatists and their Russian handlers. The militants admitted to shooting down a civilian jet. “It’s 100 percent a passenger aircraft,” a militant identified as “Major” said, noting that there were no weapons at the crash site. “Absolutely nothing. Civilian items, medicinal stuff, towels, toilet paper.”

The public case against the separatists began to rapidly expand. On Friday, a day after the crash, the SBU published on its YouTube channel another set of intercepted phone calls between separatists in the east. In these conversations, the militants discussed the arrival and movements of Buk anti-aircraft missiles in the country’s east. The Buk missile system is an advanced, medium-range missile system capable of shooting down an aircraft traveling at 33,000 feet, the reported altitude of Flight MH17 before it crashed.

Other reports on social media from ordinary Ukrainians as well as journalists said that Buk missiles were present in the area where the plane was shot down. The Ukrainian government and U.S. officials seized on these too, noting in their public statements reports of the missiles’ presence in eastern Ukraine. A video released by the Ukrainian Interior Ministry showed what appeared to be a Buk missile system transported by a truck toward the border with Russia. The missile system looked to be missing a missile, an indication that one had been fired.

The separatists maintain that they lack the capability to shoot down an aircraft at that altitude, but a few weeks before the crash, the official press account of the Donetsk People’s Republic bragged in a now-deleted tweet about coming into possession of a Buk.

In the aftermath of the shoot-down, observers have flocked to the crash site and posted dozens of photos of the wreckage, which have been pored over by forensics experts and crash-scene investigators. Many of the bodies are scattered in fields of wildflowers that also contain macabre visual evidence that the plane was downed by a missile. In one photograph, a section of the plane’s fuselage is riddled with shrapnel:

Other photographs from the crash site also show evidence of metallic tearing that appears consistent with shrapnel.

The body of evidence, which anyone with an Internet connection can review, points undeniably toward pro-Russian separatists and their backers in Moscow, according to U.S., Ukrainian, and other European leaders. Those officials all have access to classified sources of intelligence, which they’ve also been using to bolster the credibility of the tweets and YouTube videos.

U.S. intelligence agencies matched the voices of separatist leaders talking in the YouTube clip to prior “recordings of known separatists,” according to an official U.S. statement posted Sunday by the embassy in Kiev. And analysts watched video on social media that showed an SA-11 missile launcher being moved out of Ukraine and back into Russia aboard a transporter, the statement said. “The video indicated the system was missing at least one missile, suggesting it had conducted a launch.”

This wasn’t the first time U.S. intelligence agencies spotted Russian military equipment in Ukraine. Following the shoot-down, the United States reported that it had been tracking a buildup in Russian weapons over the past month. And less than a week before the attack, “Russia sent a convoy of military equipment with up to 150 vehicles including tanks, armored personnel carriers, artillery, and multiple rocket launchers to the separatist [sic],” the statement said. “We also have information indicating that Russia is providing training to separatist fighters at a facility in southwest Russia, and this effort included training on air defense systems.”

The statement didn’t state the source of this intelligence. But following Russia’s invasion of Crimea in February, the United States pointed more imagery satellites at eastern Ukraine, which helped track a buildup of Russian forces along the border. That intelligence prompted officials to warn in March that a Russian invasion of eastern Ukraine could occur at any moment. After Malaysia Airlines Flight 17 went down, officials provided even more evidence from these earlier satellite scans to bolster their case that Russia was ultimately responsible for the shoot-down.

But as impressive as spy photos and voice analysis may be, it’s social media that has helped build the public case against Russia and that has rallied world leaders to call for a thorough investigation of the shoot-down and consider imposing new sanctions on Moscow. Given the volume and the specificity of this publicly available intelligence, it’s likely that the case against Putin would be just as persuasive even if all the usual sources of state spycraft weren’t on the table.