Why apartment, shopping, and office complexes keep showing up on the backs of giant, golden flattops.

SHANGHAI — Of the topics that keep China watchers awake at night, two of the most-discussed are aircraft carriers and real estate. China launched its first aircraft carrier, the Liaoning, in September 2012. It was merely a re-commissioned Soviet hulk, but it got Americans debating its implications for the United States, its allies, and the balance of power in Asia. Meanwhile, China’s real estate market has been called the “single most important sector in the entire global economy.” For years this crucial driver of Chinese growth has looked like a bubble, one which every few years appears on the verge of bursting amid excess supply and falling home prices, with distressing implications for China and the world economy.

It may therefore be disconcerting that images of condos and office towers looming from the decks of aircraft carriers have proliferated around China. Are the country’s two most threatening forces coalescing into an unholy union? Perhaps the images signal a plot to export the nation’s property troubles to the United States: Motivated by the recent spread of empty apartment complexes, the Chinese People’s Liberation Army first will chisel vacant housing blocks out of the overbuilt and underpopulated “ghost cities” of Inner Mongolia, mount them on the Liaoning for the journey across the Pacific, and at last unceremoniously dump their burdens on the fragile California housing market. (Sun Tzu would have been proud.)

The true explanation for China’s property-laden aircraft carriers is more prosaic. They are but one more trend in the cacophonous world of Chinese real estate advertising, jostling for attention in a sagging market from both the pages of brochures and billboards surrounding construction sites, like this one in Jiashan, a small city near Shanghai: 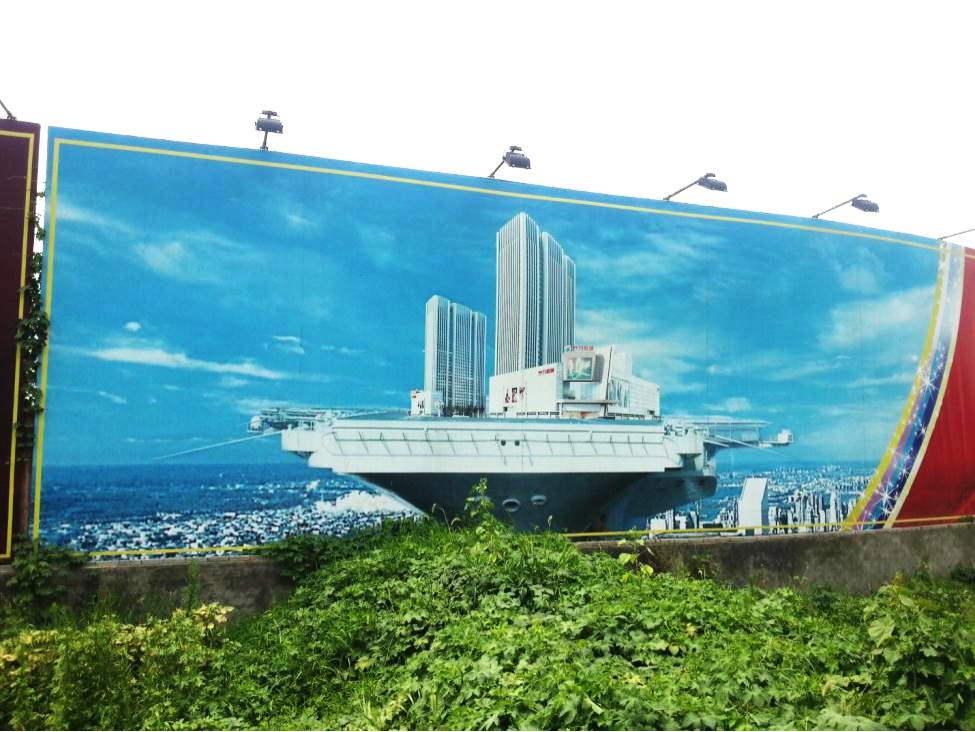 The symbolism extends beyond the carriers’ role in great power politics to their status as enormous, complex machines — the result of hundreds of moving parts, interlocking systems, and human crews working in unison to produce one of the most powerful forces in existence. Firms here naturally seek to associate themselves with this comprehensive, world-leading workmanship and coordination.

It’s not surprising that the property industry, which by some estimates accounts for about 15 percent of China’s GDP, has joined the fray. One brochure for an office block in a large inland city deploys a range of pleasing commercial vocabulary to declare itself, in English, a “big east side one-stop business aircraft carrier.” Then there’s this office-hotel combo, loaded onto an aircraft carrier which appears to float over a distinctly non-Chinese cityscape: 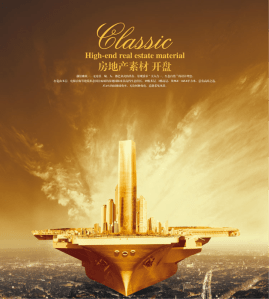 This isn’t the only instance of real estate developers liberally using Photoshop to capture the attention of jaded buyers. It is already de riguer for brochures to edit images of housing developments so they appear to blossom from fields of green, even if in reality they are adrift in a gray urban sea. Others go farther, editing renderings of their firm’s skyscrapers so they appear to dominate the skylines of Western financial centers.

But China watchers should not be not alarmed by any of this chest-thumping. Images of aircraft carriers bearing shopping malls and apartment high-rises are nothing more than local developers pulling out all the stops in a hyper-competitive market. Genuine angst will be warranted when the Chinese military becomes the aircraft carrier of, well, operating aircraft carriers.