‘We’re Not Sure Their Capabilities Match Their Desire’

Is the Khorasan Group as dangerous as the White House is making it out to be?

Before the first U.S. military aircraft attacked the headquarters of the Islamic State in Raqqa, Syria, early Tuesday morning, waves of American Tomahawk cruise missiles began pounding targets 130 miles west, near the battleground city of Aleppo. They weren’t targeting the Islamic State, though. They were battering the training camps and explosives-making facilities of a little-known al Qaeda offshoot called the Khorasan Group that officials say was in the final stages of planning an attack on the United States or European countries.

The U.S.-led airstrikes against the Islamic State gave President Barack Obama a moment of opportunity to launch a one-two punch, hitting both the high-profile militant group that has overtaken vast swaths of Iraq and Syria and the shadowy Khorasan Group. But absent the strikes on the Islamic State, which have been telegraphed for weeks, it’s difficult to know if, or when, Obama would have ordered an attack on Khorasan. U.S. intelligence agencies have been tracking the group’s evolution for years, but until now, the White House avoided taking military action. As it happened, though, the attacks on the Islamic State have finally given the administration a pretext for hitting Khorasan, which U.S. intelligence officials say is trying to learn how to build bombs that can be sneaked onto commercial airliners.

Still, the Syrian airstrikes have raised questions about why the administration didn’t attack Khorasan sooner and whether it’s actually as dangerous as the White House is now claiming. Officials and terrorism experts have described the group as a cell of well-trained al Qaeda leaders with ambitions to wage war against the West. Khorasan is led by Muhsin al-Fadhli, a close confidant of Osama bin Laden, and one of the few al Qaeda insiders who knew about the Sept. 11, 2001, attacks before they happened. Unlike the Islamic State, which has used social media to celebrate its battlefield wins, threaten the West, and post gruesome photos of beheadings and crucifixion, Khorasan has yet to even publicly confirm its existence.

Despite the group’s low profile, U.S. and other nations’ spy services have been tracking Khorasan and its members “over the past few years, since many of its members arrived in Syria, notably from Pakistan and Afghanistan,” a senior administration official said Tuesday in a briefing with reporters. “Their plotting was reaching an advanced stage,” the official said.

Army Lt. Gen. William Mayville, director of operations for the Joint Chiefs of Staff, told reporters that the group had been conducting experiments with improvised explosives devices in Syria and recruiting Westerners fighting there to return to their home countries to mount new terrorist attacks.

Still, it’s unclear what — if any — concrete intelligence prompted the United States to attack the group now. Officials who spoke with reporters about the Syria strikes didn’t offer any information about a specific plot. Nor did they explain why the current threat — which was reportedly described to members of Congress a year ago — is any more dire than it was in July, when Khorasan’s efforts to recruit Westerners prompted security officials to tighten security checks at some overseas airports with direct flights to the United States.

Following the airstrikes in Syria, the Defense Department characterized the attacks on Khorasan — which were conducted exclusively by the United States without the participation of the Arab nations that helped hit Islamic State targets — as an “action to disrupt the imminent attack plotting against the United States and Western interests” that Khorasan was conducting. “Intelligence reports indicated that the Khorasan Group was in the final stages of plans to execute major attacks against Western targets and potentially the U.S. homeland,” Mayville said.

The senior administration official said that the White House had been contemplating an attack on Khorasan “for several months,” and that the costs and benefits of hitting the group in Syria were being weighed “separate and apart” from any strike on the Islamic State, which is also known as ISIS or ISIL. But during that period, the Khorasan threat never prompted the United States to hit the group.

That inaction can be partly explained by the divisions within the intelligence community and among terrorism experts over how big a threat Khorasan actually poses. The senior administration official said it was “a united view of our intelligence community” that the group’s plotting posed “an imminent threat to the United States and essentially our allies.”

Some senior intelligence officials, however, haven’t been so emphatic in their assessments. “In terms of threat to the homeland, Khorasan may pose as much of a danger as the Islamic State,” Director of National Intelligence James Clapper said at a conference in Washington last week. But according to the top U.S. counterterrorism official, as well as Obama himself, there is “no credible information” that the militants of the Islamic State were planning to attack inside the United States. Although the group could pose a domestic terrorism threat if left unchecked, any plot it tried launching today would be “limited in scope” and “nothing like a 9/11-scale attack,” Matthew Olsen, the director of the National Counterterrorism Center, said in remarks at the Brookings Institution earlier this month. That would suggest that Khorasan doesn’t have the capability either, even if it’s working to develop it.

“Khorasan has the desire to attack, though we’re not sure their capabilities match their desire,” a senior U.S. counterterrorism official told Foreign Policy.

What has U.S. spies most on edge now are Khorasan’s potential links to al Qaeda in the Arabian Peninsula, a group renowned for its bomb-making skills. The outfit’s chief bomb-maker, Ibrahim al-Asiri, is still alive despite numerous attempts by the United States to kill him, and he has been training others in his lethal craft, according to a senior U.S. intelligence official and to an independent terrorism analyst who doesn’t work for the government.

Asiri is believed to have designed an explosive device that a young al Qaeda operative hid in his underwear in a failed attempt to bring down a commercial airliner over Detroit on Christmas Day in 2009. And he designed a bomb hidden inside printer cartridges, which could be smuggled into airline cargo holds, in a plot that was thwarted by security services. Those failed plots came closer to fruition than almost any other that al Qaeda and its affiliates have mounted since Sept. 11, 2001.

Intelligence officials say they don’t know precisely how close Khorasan is to obtaining the knowledge to make bombs like that. But it only takes one working device and one willing recruit to carry out a lethal strike, the counterterrorism official said, noting that the 2009 underwear bomb plot was nearly successful, save for a flaw in the bomb’s design — it ignited without triggering a detonation and only burned the would-be bomber’s skin. But the design presumably could be improved for a subsequent attack. And if just one of Asiri’s acolytes were to team up with Khorasan, that would give the group a significant opportunity to attack the United States.

The group could also pose a risk if it joins forces with other terrorist outfits operating in Syria. Khorasan is linked with al-Nusra Front, which broke off from the Islamic State in 2013, and with al Qaeda. Security experts previously raised concerns that targeting the Islamic State alone would simply strengthen these competitors. But Khorasan’s name suggests at least one shared ambition with both with the Islamic State and al-Nusra Front: to erase European-imposed borders and re-establish an Islamic state in their place.

Both Khorasan (or Khurasan) and al-Sham, a geographic term used in the Islamic State and al-Nusra’s original Arabic names, were provinces of the successive Umayyad and Abbasid caliphates from the seventh century until around the 10th century, when Abbasid control started giving way to more local rule. At various points in history, the Khorasan name referred to a region that spanned parts of present-day Iran, Afghanistan, Turkmenistan, and other neighboring countries. Al Qaeda still calls the region by that name. A smaller territory within Iran’s borders now known as Khorasan corresponds with the southwestern part of the historical province. 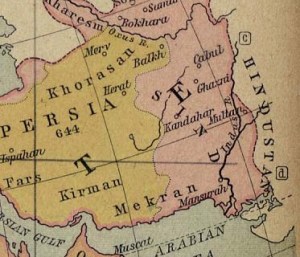 Khorasan’s leader Fadhli has been based at different points in Afghanistan and Iran, but the group’s members aren’t confined to historical Khorasan, nor to Syria. According to intelligence officials cited by the New York Times, they’re spread “across the Middle East, South Asia, and North Africa.”

The origins of Khorasan’s name are poetic: It means “land where the sun rises” in an ancient Persian language. The name’s obscurity in the English-speaking world means it’s unlikely to generate anything like the controversy over what to call the Islamic State. But as with that group, Khorasan’s name positions it as a purported heir of Islamic authority. The Khorasan region appears in a teaching of Mohammed often cited by Sunni militants, although others seriously question its authenticity.

“Armies carrying black flags will come from Khorasan, and no power will be able to stop them and they will finally reach Jerusalem, where they will raise their flags,” the passage says. It’s no accident that the Islamic State, al Qaeda, and al-Nusra Front flags are all black.

Perhaps the biggest concern for the U.S. government is that Khorasan will try to raise its flag not just within its namesake and al-Sham but in countries far beyond the scope of any historical caliphate.