A selection of the most powerful remixed images coming from the island city. 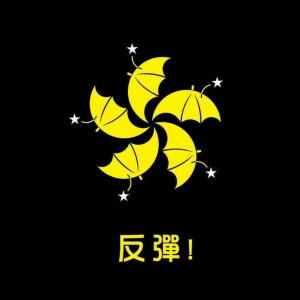 Social media has ensured that what’s happening in Hong Kong won’t stay there. The Internet lit up on the night of Sept. 28, Hong Kong time, after pro-democracy protesters in the island city braved tear gas and rubber bullets using face masks, saran wrap, and umbrellas. The clash came about due to increasingly widespread dissatisfaction among residents of Hong Kong, which purports to operate under a separate system from mainland China but has been rocked by Beijing’s assertion that it must pre-screen candidates running for the head of Hong Kong government. The image of scores of umbrellas arrayed against massed riot police has resonated deeply, capturing the asymmetry in power between protestors and authorities. On a variety of online platforms — including photo-sharing site Instagram, blocked by mainland Chinese censors in short order — users remixed the umbrella images into powerful, viral symbols that have helped continued to attract international attention to Hong Kong’s latest events.

The above image, by an unknown author, encourages protesters to “bounce back,” modifying the Hong Kong flag to show five umbrellas. 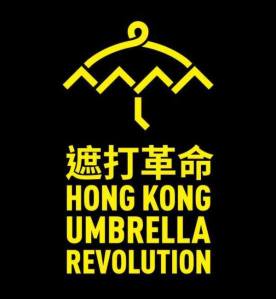 This image is the logo on the Facebook page of “Umbrella Revolution,” maintained by a group which purports to speak for protesters. Facebook is a popular social network among Hong Kongese. The page has received over 13,000 likes since its creation just hours ago. 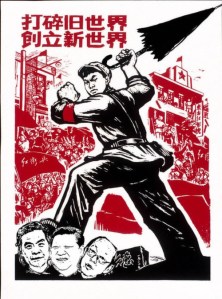 In the repackaged propaganda image above, a Red Guard — a central figure in late Chairman Mao Zedong’s Cultural Revolution, a disastrous social experiment that lasted from 1966-1976 and nearly tore Chinese society apart at the seams — prepares to strike three heads with an umbrella. At left is C.Y. Leung, Hong Kong’s Beijing-friendly Chief Executive and target of some protester complaints. In the middle is Xi Jinping, China’s president. At right is Wang Guangya, who oversees Hong Kong affairs for Beijing’s powerful State Council. The text, straight from the Mao era, blares, “Destroy the old world; found a new world.” 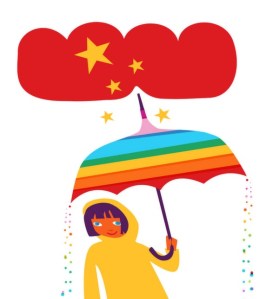 This image traces to Tania Willis, a Hong Kong-based children’s illustrator. The cloud above invokes the flag of mainland China. 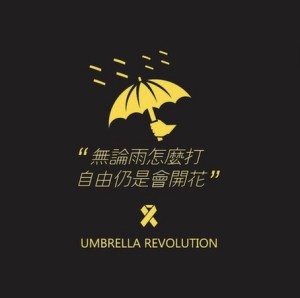 The Chinese text reads, “No matter how hard the rain strikes, the flower of freedom will bloom.” Many Facebook users who support Hong Kong protesters have changed their profile images to depict a yellow ribbon, as at bottom, which appears to be a symbol of mourning but also solidarity. 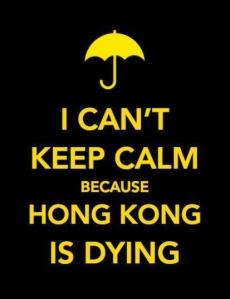 This image is a takeoff of the well-worn (and oft-parodied) British admonition to citizens in the run-up to World War II to “keep calm and carry on.” Hong Kong is a former British colony. 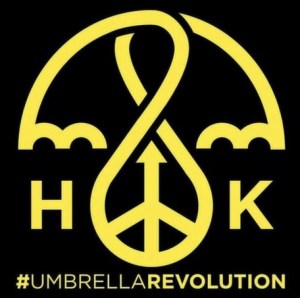 An umbrella handle morphs into a yellow ribbon and, at bottom, a peace symbol.