A Front Seat to War

Thousands have fled the Syrian city of Kobani into Turkey. As tension between Kurds and Turkish govt. mount, most can only watch from the border as their city falls to the Islamic State. 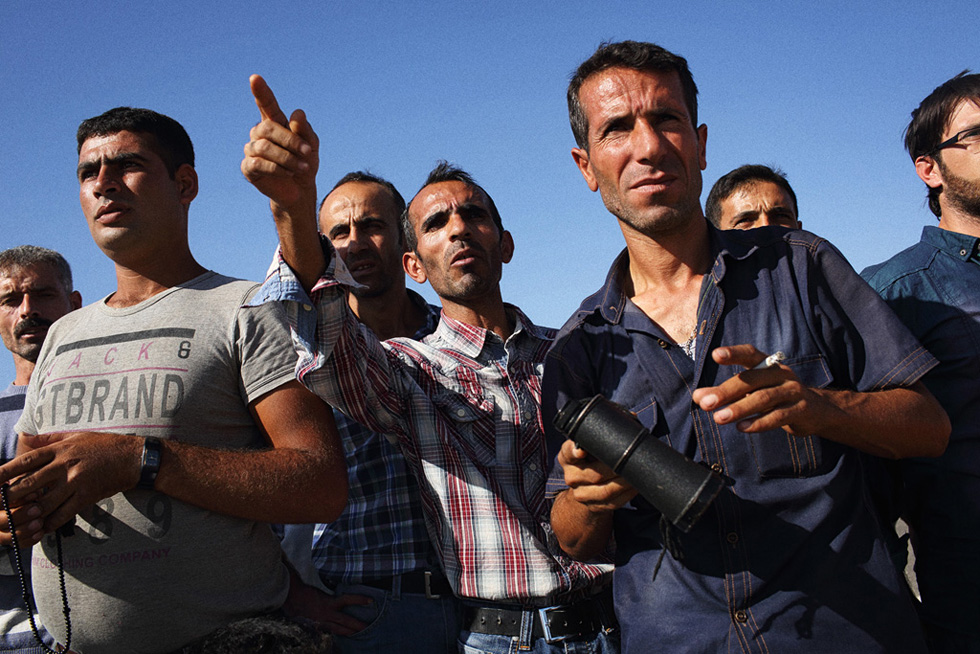 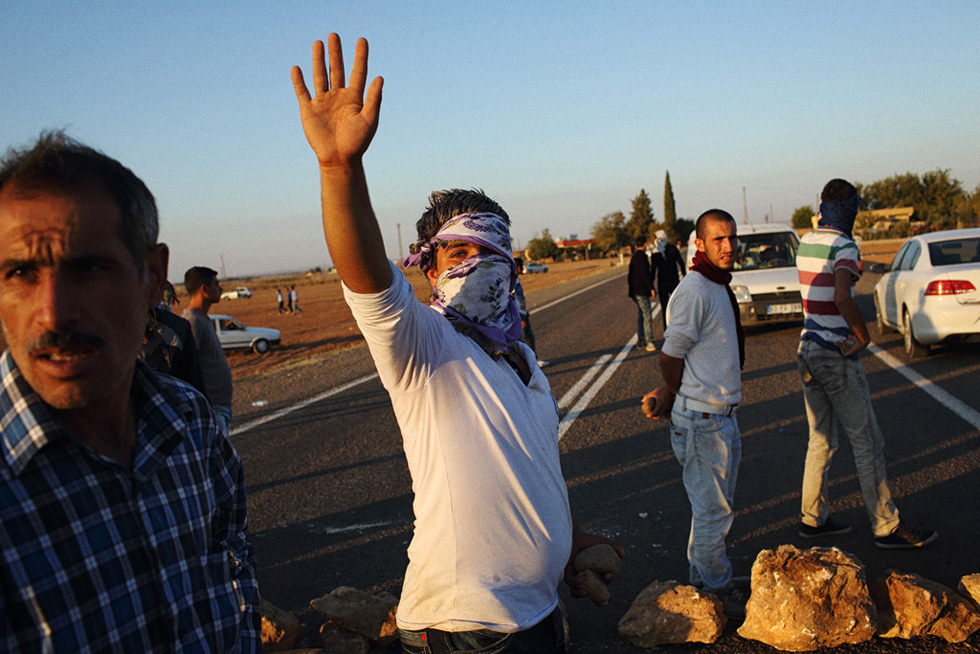 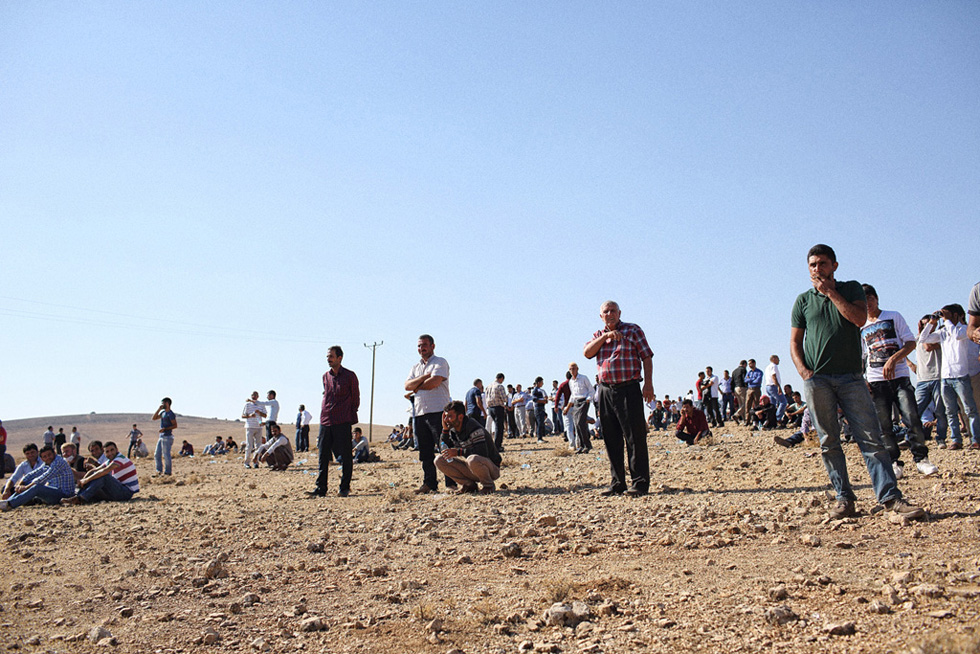 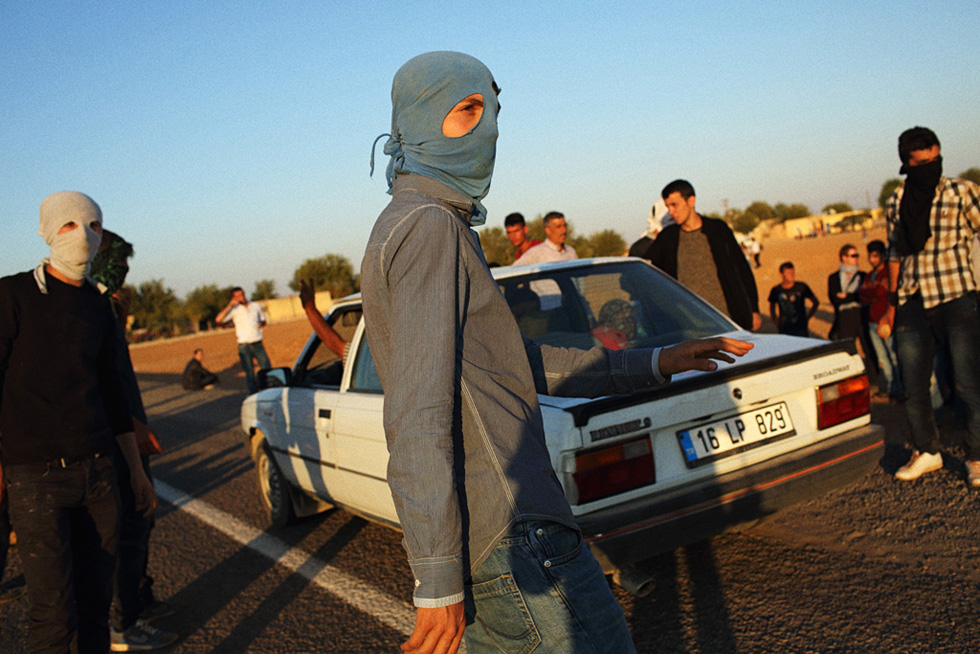 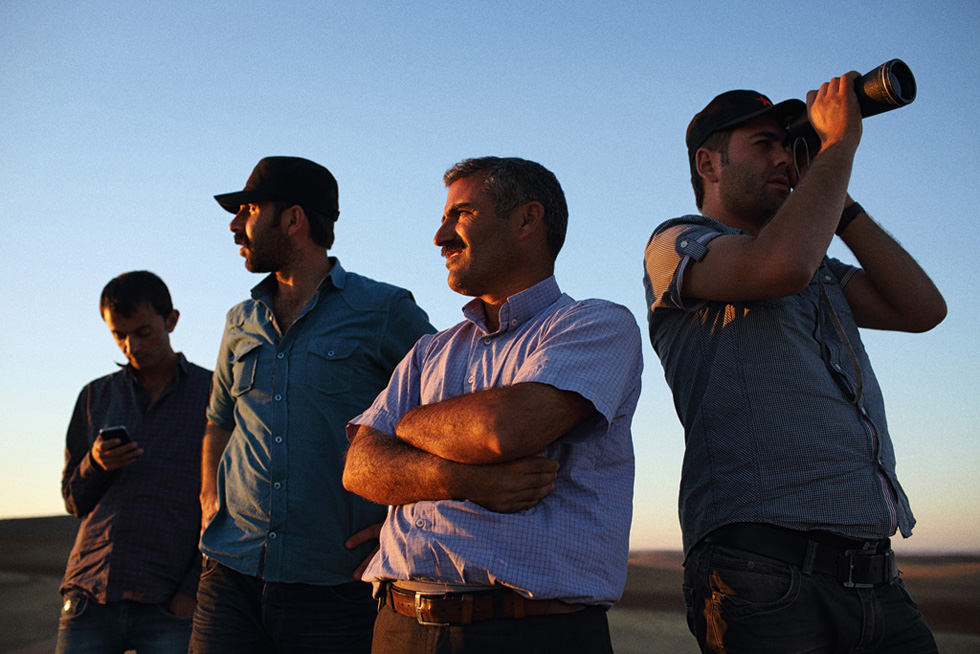 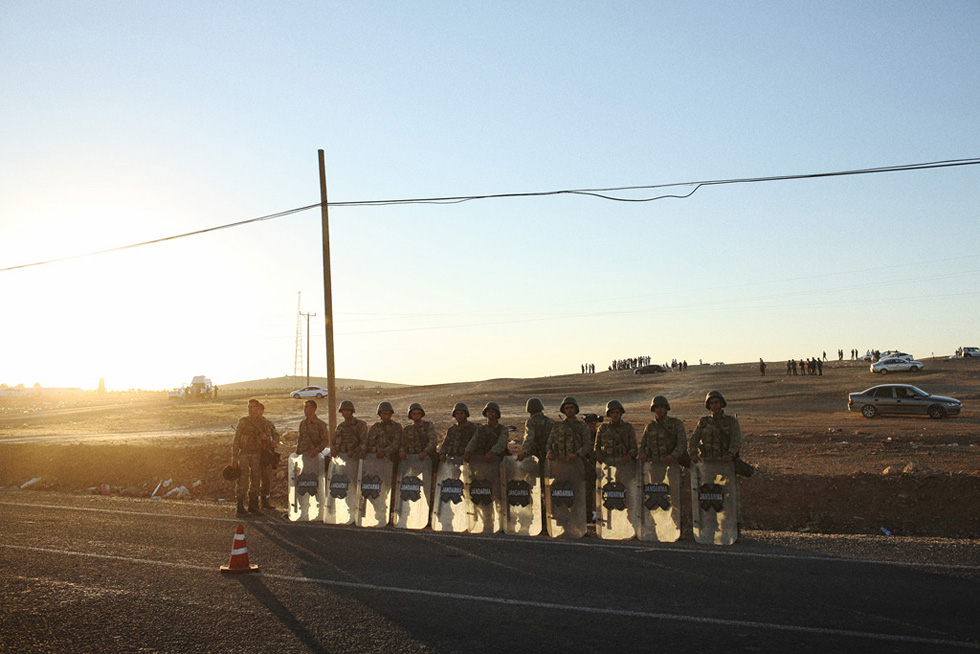 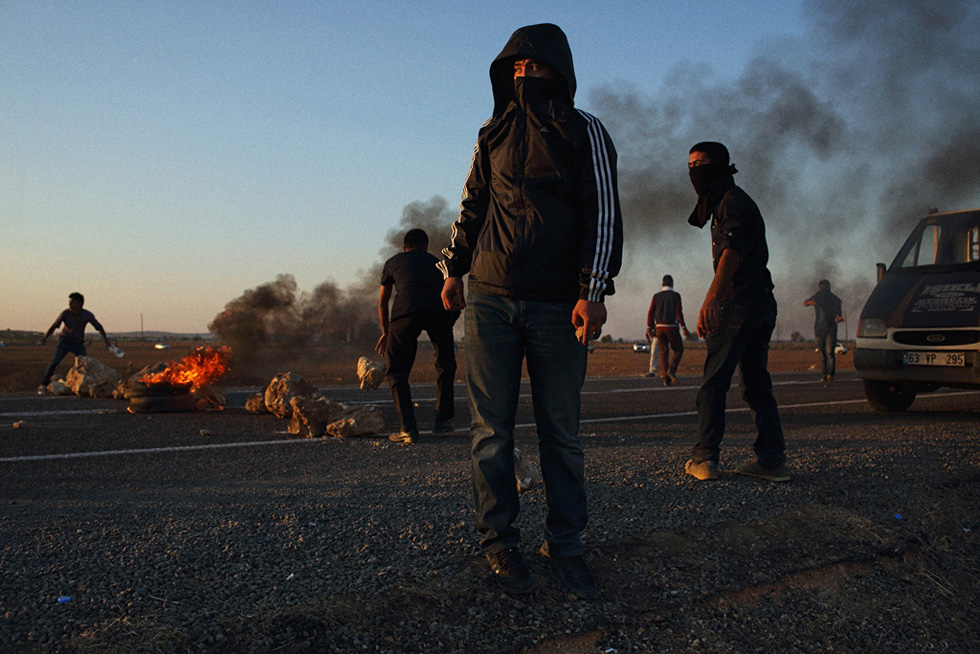 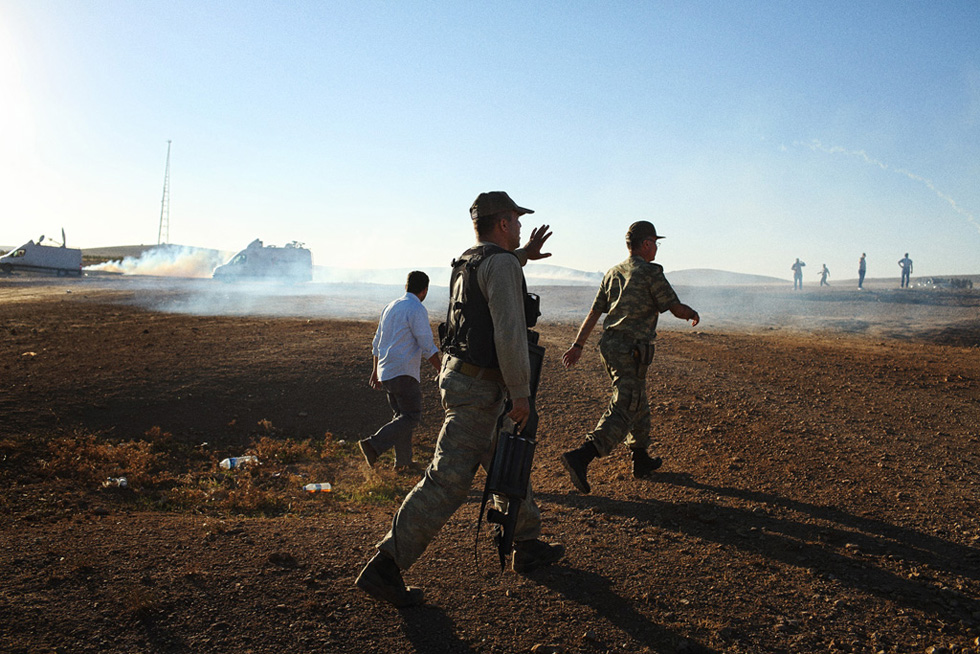 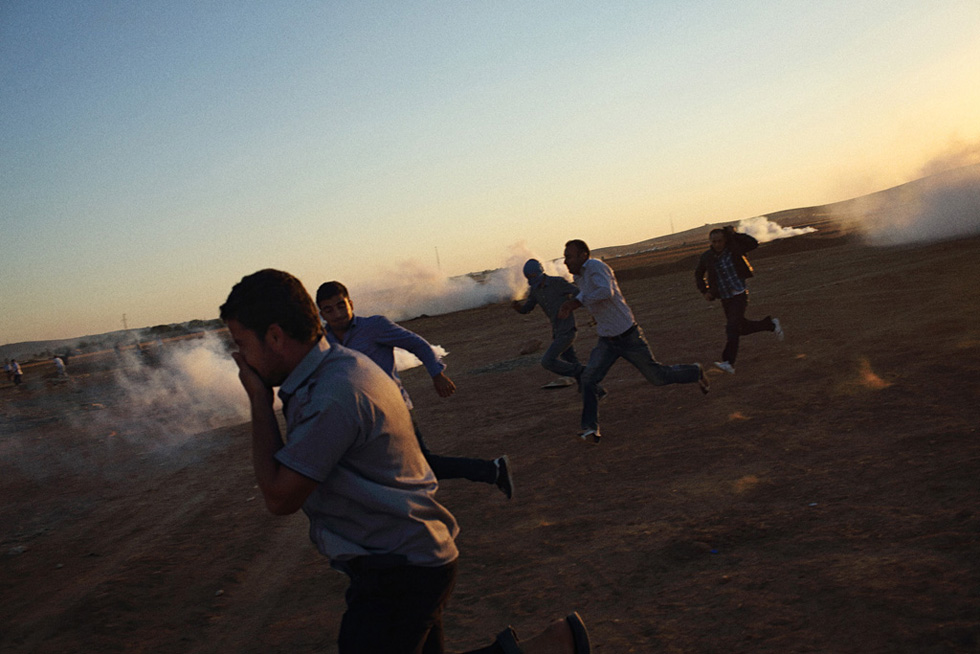 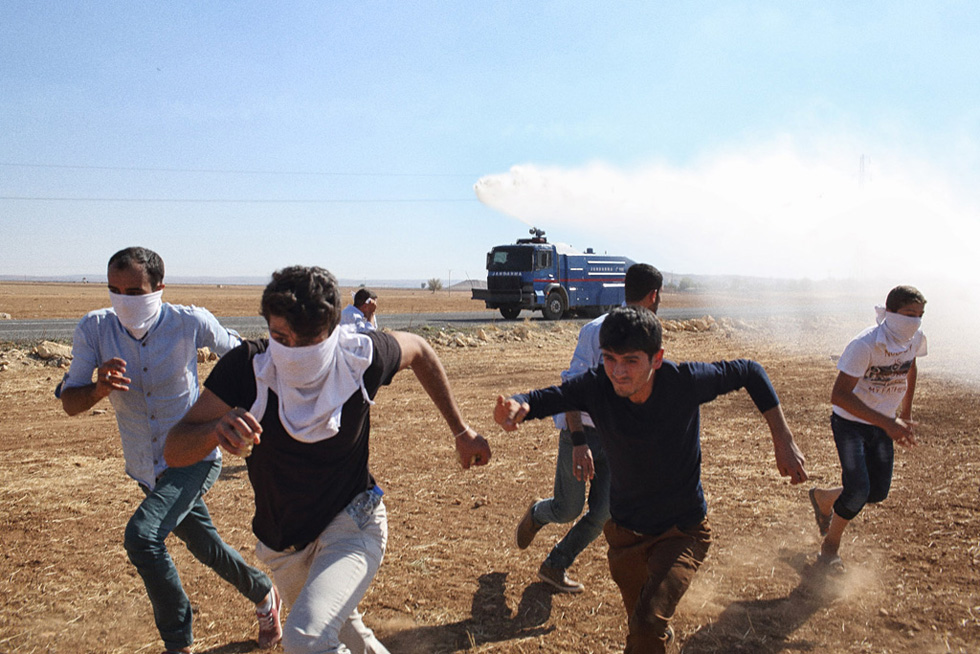 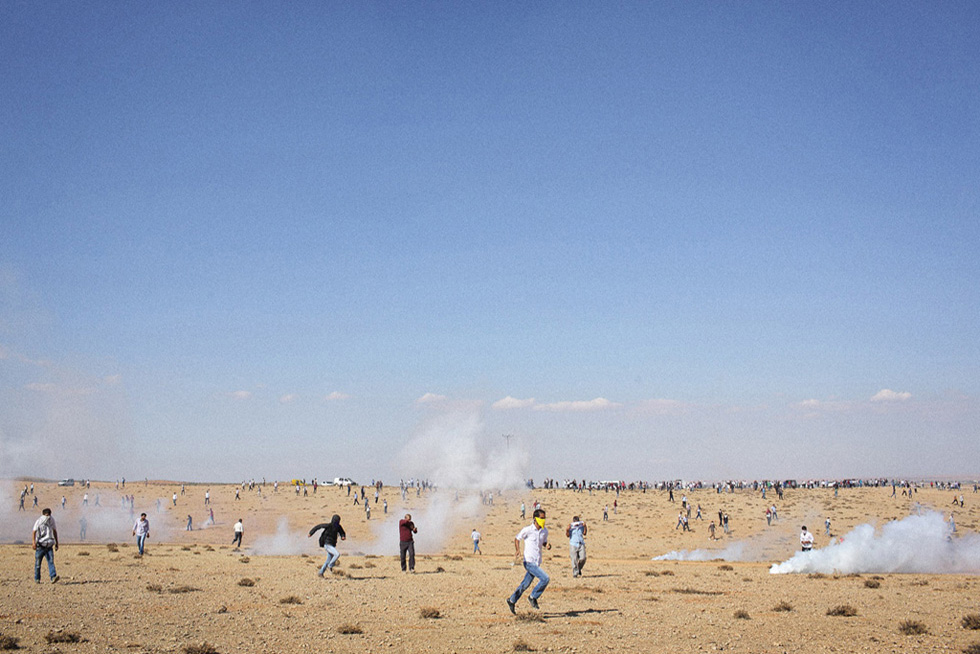 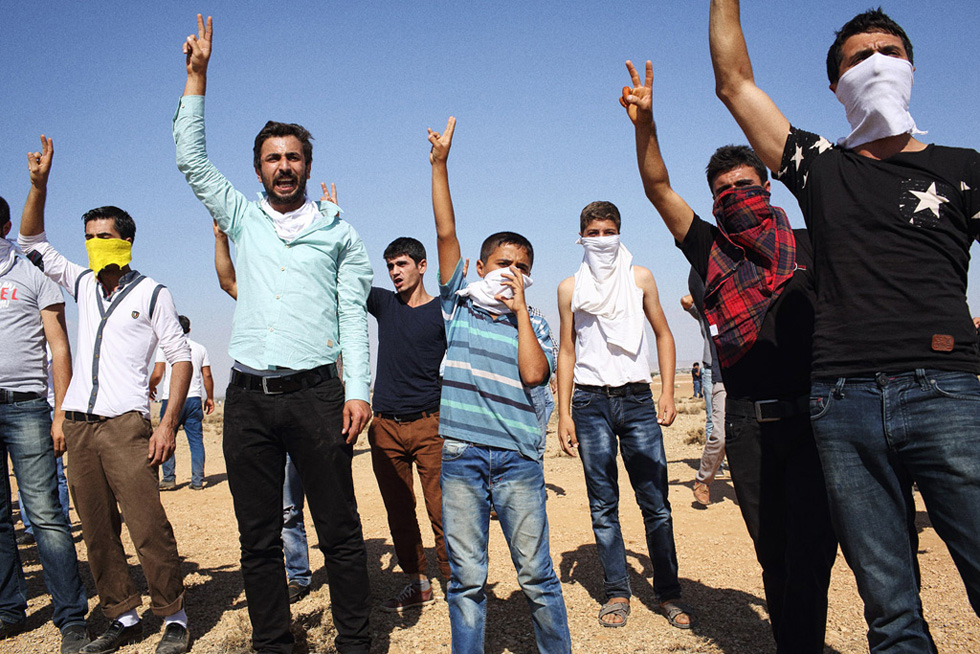 A crowd on a road leading to Turkey's border with Syria watch IS militants advance on Kurdish YPG fighters in the city of Kobani, Oct. 6.

Kurdish protesters block a road on the Turkish side of the border with Syria to search for Turks, whom they accuse of collaborating with IS, in passing cars, Oct. 8.

A crowd on a hill in Turkey watches IS militants across the border close in on the city of Kobani, Oct. 6.

Kurds set up the makeshift roadblock between the Turkish towns of Suruc and Musitpinar, about a mile from the Syrian border, Oct. 6. Security forces in armored military and police vehicles later scattered the crowd with tear gas.

Kurdish men near the border, Oct. 1.

Turkish soldiers assemble after dispersing a crowd from a rise on Turkey's side of the Syrian border, Oct. 4.

Kurdish men and youths at a makeshift roadblock near Turkey's border with Syria, Oct. 6.

Throughout the day men gathered on the rooftop of a lone, abandoned house on a hill overlooking the Turkish-Syrian and beyond to the city of Kobani. They stood, squinting into the distance; some watched through binoculars or theodolites. The sun blazed through towers of smoke that rose silently above Kobani. The mood was mournful, quiet even with the sounds of gunfire and exploding mortars in the distance.

“These men aren’t here for fun,” a local Turkish man said. “Those are their homes,” he continued, pointing towards the city that had been under siege from militants of the Islamic State (IS) for more than a week.

The men he was referring to were among the hundreds of thousands that have fled Kobani in recent weeks as the stories of IS atrocities made their way into the households of the 400,000 residents.

Most had crossed the border, less than a mile away into Turkey, and were sheltering in makeshift camps, construction sites, mosques, schools, or had taken refuge in the homes of good Samaritans.

During the day, many staying in nearby Suruç or Urfa would make their way back to the border region to watch as hope for their city appeared to be slipping by the day. Kurdish YPG fighters, outnumbered and outgunned, were simply no match for the IS forces who raised their flag in the east of Kobani in a seeming show of preliminary victory, on Oct. 7.

As the battle wore on, the Kurds (and sympathetic Turks) who made their way to the border each day became increasingly infuriated by the presence of the Turkish soldiers. Not only were they not acting to protect those just across the border from IS, they were there to prevent the hundreds of Kurdish men -- who wished to to return to Kobani to join the fight -- from crossing back over the border into Syria and into battle.

Tensions soon boiled over. The crowds chanted pro-PKK and YPG war cries, holding two fingers in the air; anywhere else this the sign for peace (or victory), but here a provocative gesture to the Turks, signifying Kurdish YPG pride. 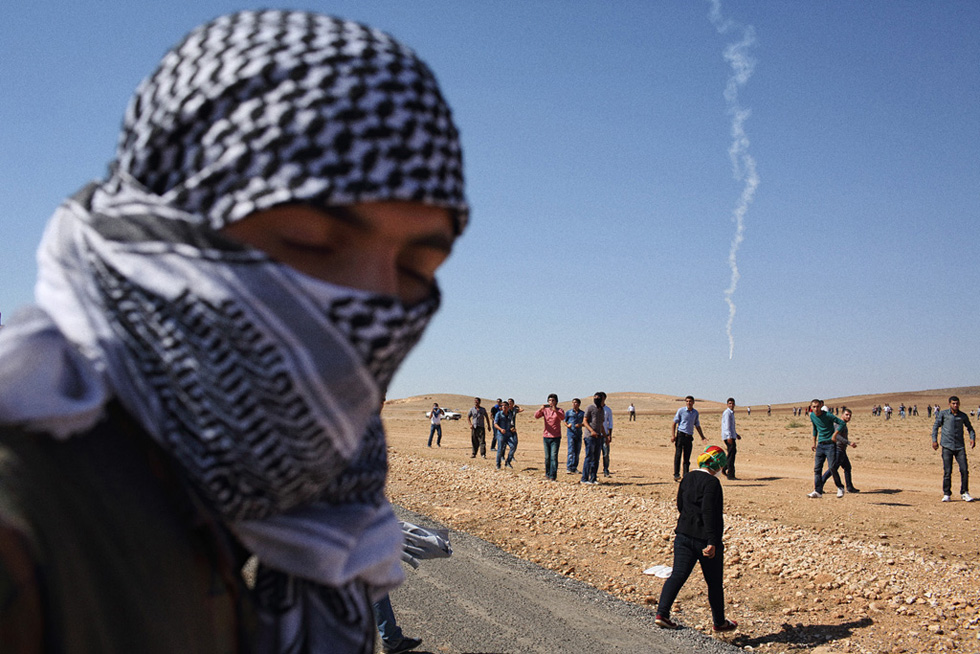 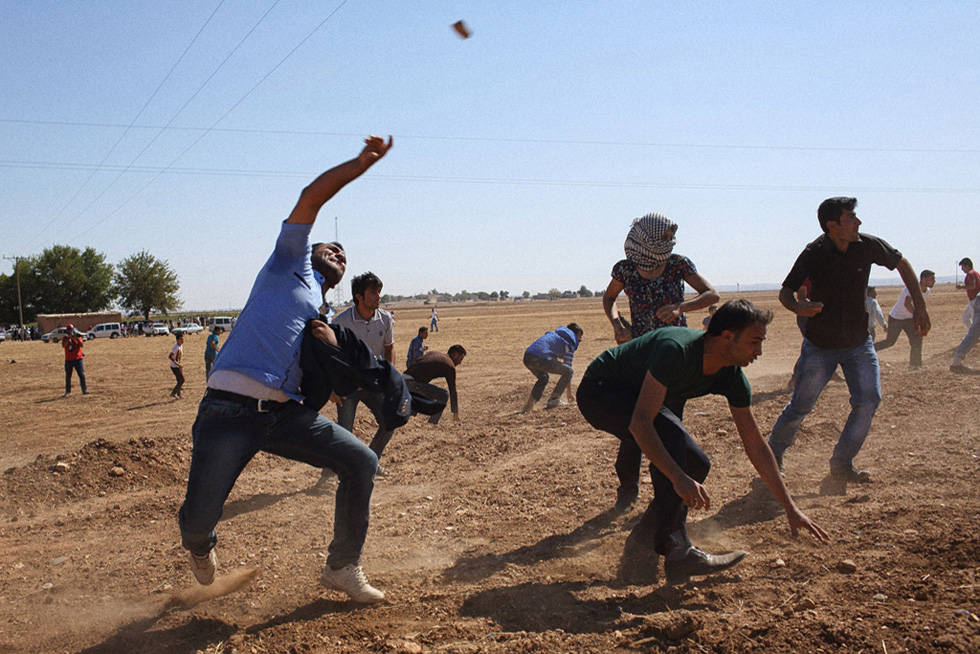 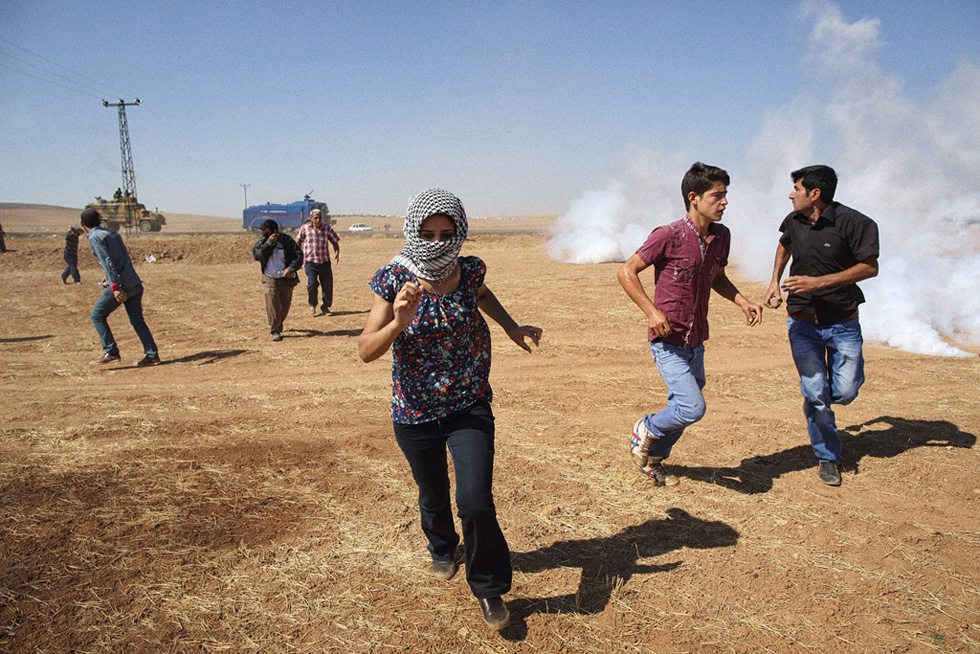 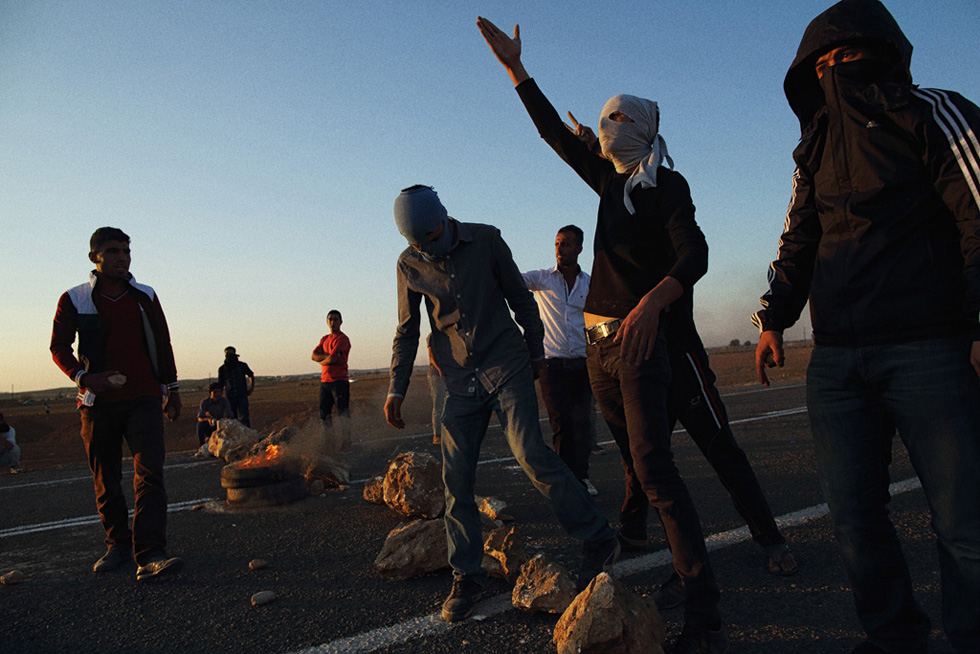 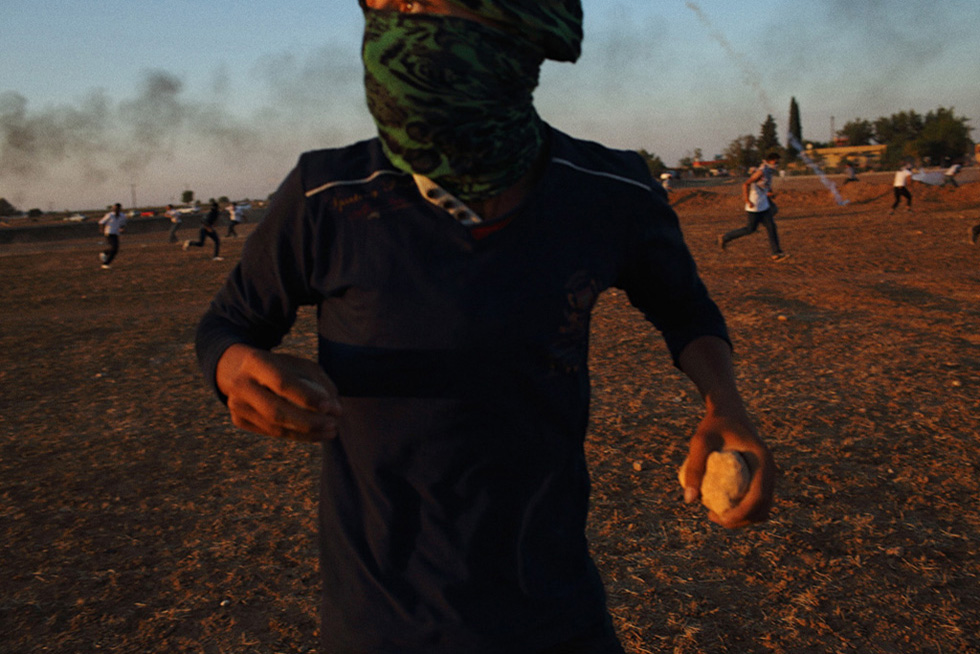 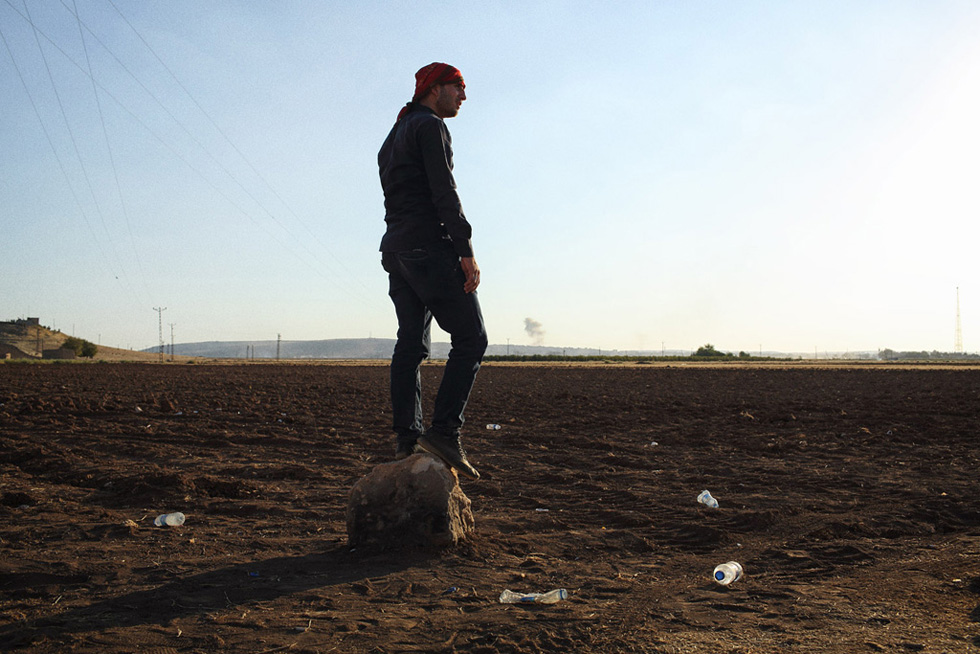 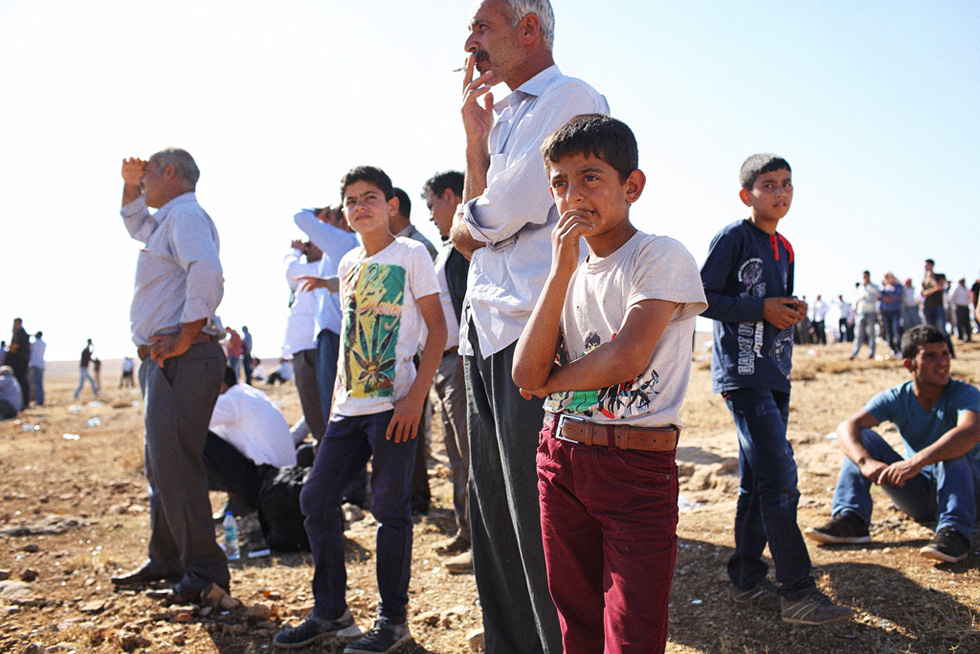 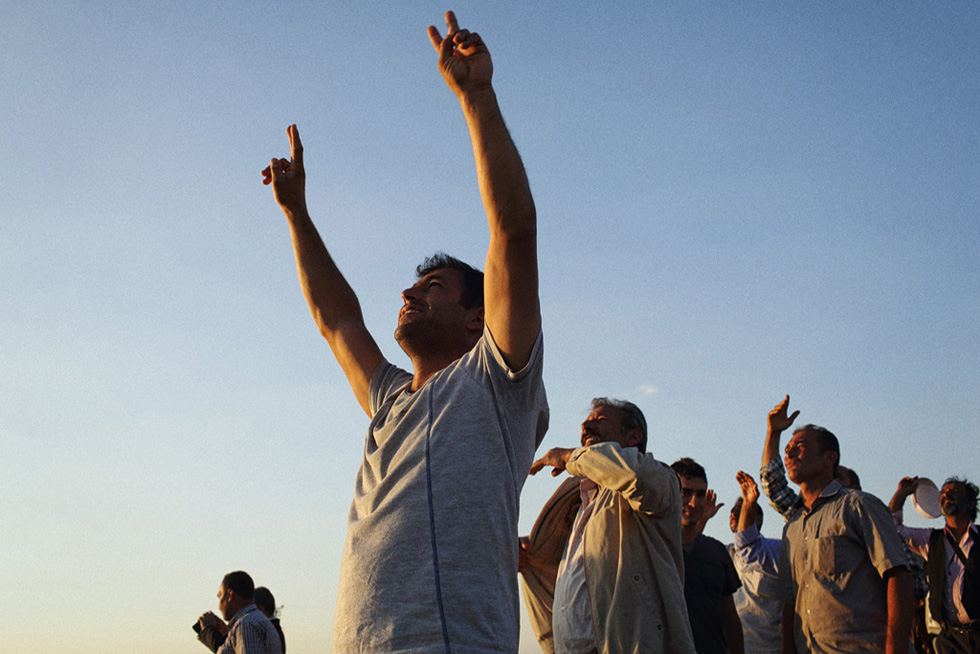 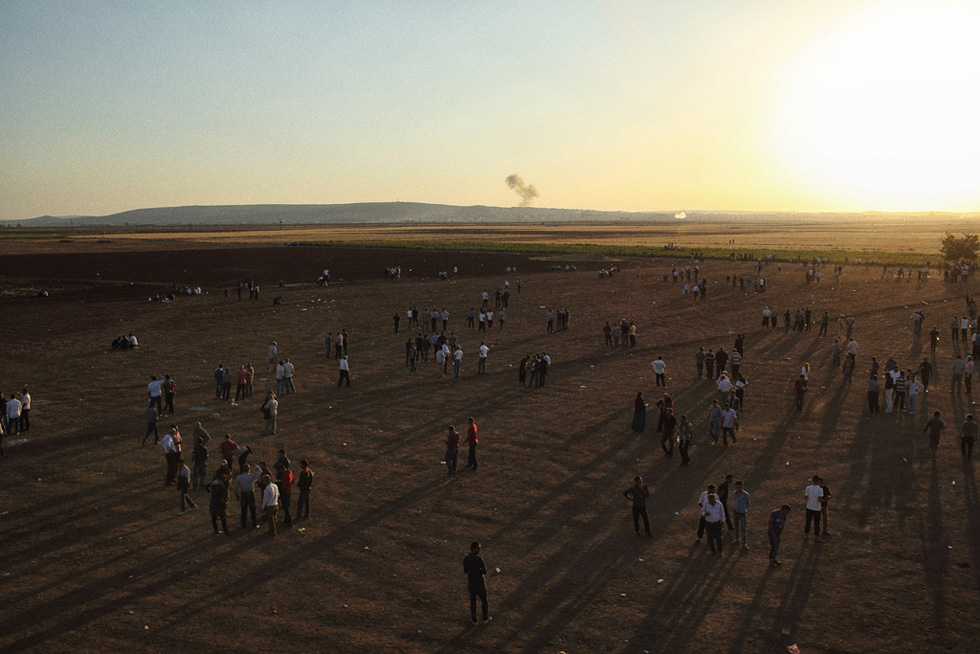 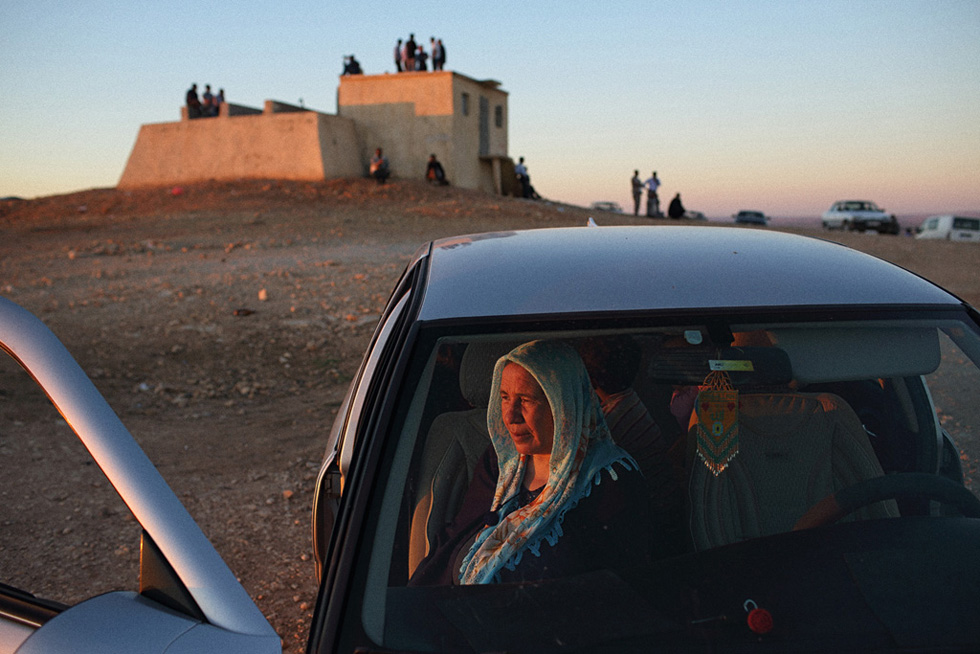 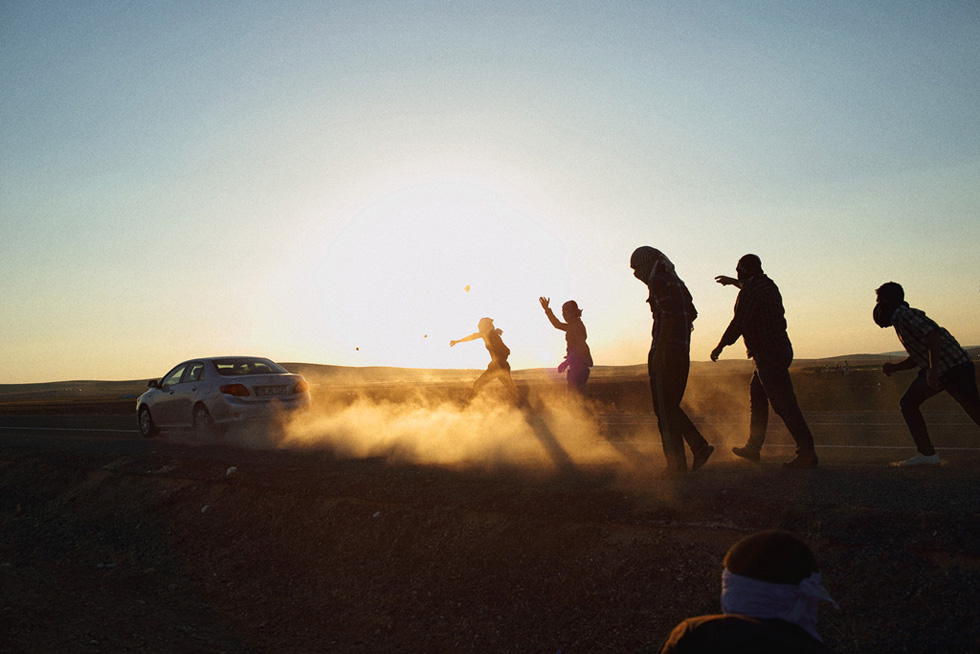 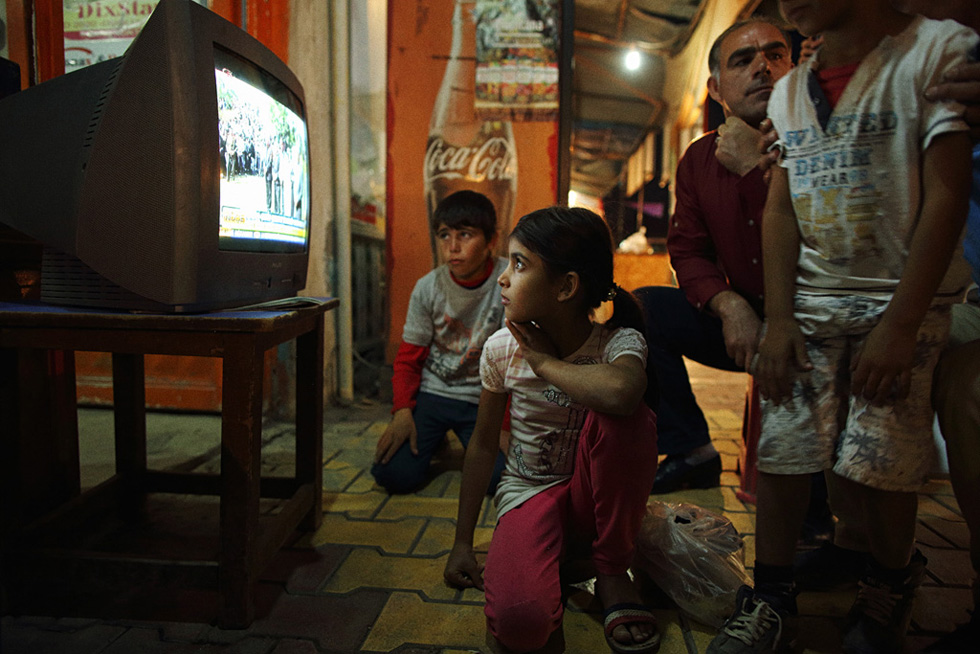 A protester near the roadblock, Oct. 5.

Smoke appears over Kobani after an airstrike on IS militants, Oct. 5.

A crowd on a hill in Mursitpinar watches IS fighters advance on Kobani, Oct. 6. Soon after, two black flags were raised in the east of the city.

A Kurdish man gestures to a fighter jet after it dropped a bomb on an IS position near Kobani, Oct. 7.

Kurds on open land near the border, Oct. 7.

A woman waits in a car as men watch artillery fired by IS fighters land near Kobani, Oct. 1.

Kurdish men and youths near a makeshift roadblock near the border, Oct. 6.

Kurds watch the news outside a store in Suruc, Turkey, Oct. 6.

When the standoff reached a tipping point after a week of relative calm, a crowd rushed the soldiers and hurled rocks. The soldiers mobilized on foot and in fighting vehicles and armored personnel carriers, firing tear gas, water canons, and rubber bullets -- successfully scattering the crowd away from the border back toward the dusty slopes and cotton fields.

The next day, as tensions gained momentum, a roadblock was set up by a group of agitated Kurdish youths who, like vigilantes, wore face masks and searched cars for Turks -- who they claimed were conspiring with IS forces. When one driver sped away, the boys threw at the car.

As Kurdish outrage towards Ankara grew so too did the momentum of protests which quickly spread across the country -- more than 20 people have been killed from Ankara to Istanbul to Diyabakir during the rioting. On Oct. 2, Turkish President Ahmet Davutoglu said that Turkey “would do whatever it could” to prevent Kobani's fall. And though Turkish soldiers still stand on the border, their backs face a city in flames.