Pack It Up, Pack It In

Thirteen years after Wisconsin’s 829th Engineer Co. deployed to build Afghanistan’s war infrastructure, they’re back to tear it apart and take it home.

FORWARD OPERATING BASE FENTY, Afghanistan — When Nick Grob and Lucas Kramer first arrived in Afghanistan, the rubble from the 9/ 11 attacks on the World Trade Center was still being cleared in New York.

Grob and Kramer were part of a small group of electricians, plumbers, and carpenters from the Wisconsin National Guard’s 829th Engineer Company that quietly deployed in the fall of 2001 with the task of building infrastructure for the United States’ war effort in Afghanistan. They built housing, installed wiring, and laid pipes.

Now they’re back with a different mission: breaking down tents, deconstructing hangars, boxing up parts. Vast bases that once housed thousands of troops plus all of their equipment from Humvees and cargo planes to desks and stoves are rapidly disappearing as the terrain reverts back to what it looked like before the war.

Thirteen years after the United States entered Afghanistan to clear out the Taliban, the vast majority of combat troops are pulling out. On Sept. 30, Afghanistan and the United States signed a bilateral security agreement that will bring the number of U.S. troops down from 30,000 to just under 10,000 by New Year’s Eve.

The future of Afghanistan is uncertain; recent events in Iraq have shown that military engagement can continue long after the official withdrawal date. But for now, the focus of the 829th and other U.S. military engineer units is on shutting down America’s longest war.

Kramer and Grob find themselves in a bewildering set of circumstances that neither soldier could have foreseen. “I think it’s really neat that we turned the lights on in this war and now we’re back turning them off,” said Kramer.

The troops are part of an unprecedented effort to save as much as possible, to recycle and reclaim billions of dollars’ worth of materiel used to wage a war.

At the close of World War I, World War II, the Korean War, and the Vietnam War, the U.S. military left behind trucks, helicopters, tents, and all kinds of equipment. World War II landing crafts continue to rust on Pacific islands. Huey helicopters tipped off aircraft carriers at the end of the Vietnam War remain at the bottom of the sea not far from what is now called Ho Chi Minh City.

Now the goal is to save as many U.S. taxpayer dollars spent on this conflict as possible — and return the Afghan countryside to what it looked like before U.S. and coalition forces arrived.

“Buildings, walls, everything you see has to come down. Everything gets recycled, including wood and nails,” said Capt. Kyle Gruber, commander of the 829th Engineers.

As U.S. troops leave, hundreds of military installations are shutting down, leaving a handful of bases in key areas like Kandahar, Jalalabad, Bagram, and Mazar-e-Sharif open for Afghan forces and a much smaller U.S. and coalition component. But even the large bases in those spots are reducing their footprint.

Some equipment will be given to Afghan security forces; building materials like plywood will be offered to Afghan civilians. Items that have outlived their usefulness or are so degraded that they’re worthless will be destroyed.

And a lot of equipment will return to the United States, including mine-resistant ambush-protected (MRAP) combat trucks, which will be given to law enforcement agencies in the United States under a Defense Department program that has caused controversy recently following the protests in Ferguson, Missouri, as some question why communities need to arm their police departments with such massive firepower.

Now the wagon train of vehicles and equipment is reversing direction, flowing out of Afghanistan. It took years to build the American presence in Afghanistan; it will take months to break it down.

While ammunition, weapons, and sensitive equipment like radios will be taken back by air, most of the equipment destined for the United States is returning via ship. “It’s like moving into a house, staying 12 years, and then moving out. And you’ve got all this stuff,” said 1st Sgt. Russel Nyberg.

“Some things you keep,” Gruber added. “Some you sell at a garage sale. Some you give to Goodwill.”

It’s quite a different task for the engineer company, because soldiers are more accustomed to building structures, not tearing them down. But the expertise from putting up buildings makes it easier to take them apart, because the Wisconsin engineers know how they’re wired, where the load-bearing walls are located, and the quickest and safest ways to dismantle them.

That’s not to say this is how engineers usually demolish structures. “Most buildings come down with either explosives or heavy equipment,” said Sgt. Brett Lazich, 26. “We’re taking these down with sledgehammers and privates.” 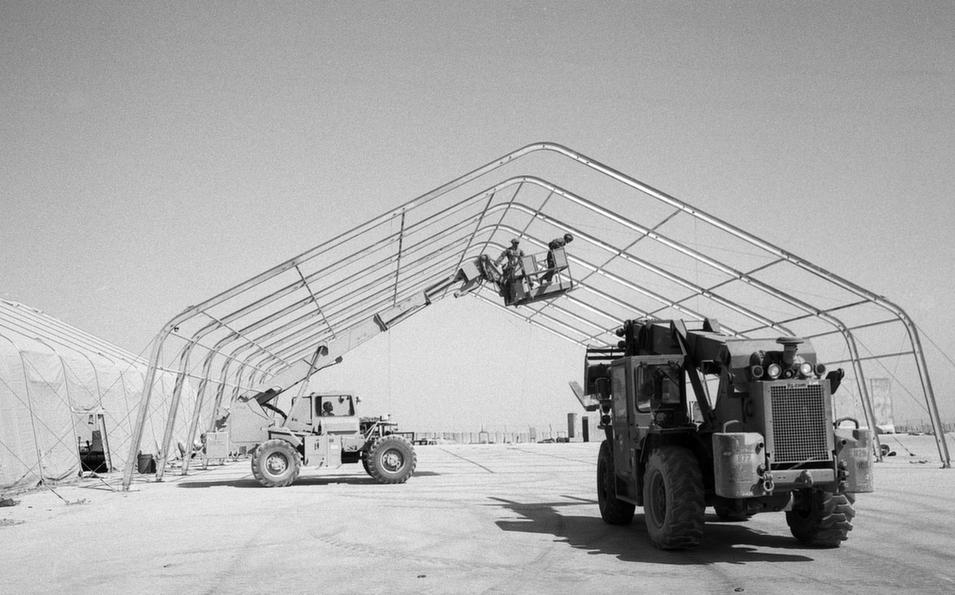 PHOTOS: BRINGING DOWN THE HOUSE THAT BUSH BUILT

On Sept. 11, 2001, Kramer, now 32 and a sergeant first class, had just started his freshman year at the University of Wisconsin, Stout, when someone in his dorm told him about the terrorist attacks. Most classes were canceled that day, and he watched the horror unfold on TV.

At the 829th Engineer Company’s monthly training weekend in October, Kramer and other members of the unit were tipped off that a few of them might be mobilized to Afghanistan. The next month a dozen soldiers were told they were going.

“I was really ecstatic. I was calling all my friends,” said Grob, an auto mechanic. “It was all new. Like, what’s going to happen?”

The small team of tradesmen boarded a plane in mid-December and found out they weren’t actually going to Afghanistan but to Uzbekistan to build housing for U.S. Special Forces soldiers. In February 2002, the Dirty Dozen — as the group called itself — was sent to Kandahar to do construction on what is now a sprawling base in southern Afghanistan — Kandahar Airfield.

By the time they arrived, U.S. and coalition forces had taken over the airfield. The original base was built by the Soviets in the 1970s, and Grob was shocked at the shoddy workmanship.

The Wisconsin engineers helped build a combat support hospital and cafeteria, wired the airport for 110 volts, put in sewer and water lines, and installed a large septic field. The team returned home in June 2002.

Kramer and Grob didn’t imagine when they returned to Wisconsin that a dozen years after turning the lights on, they’re back to turn them off, a perfect bookend to U.S. combat involvement in Afghanistan.

Still, even as they pack up, there’s an edgy nervousness among the Wisconsin soldiers, many of whom served in Iraq. They joke about having to go to that country next as the U.S. ramps up its battle against the Islamic State.

The soldiers hope for the best while focusing their energy on the task in front of them. Closing down a war is hot, filthy, tiring work. At Camp Marmal near Mazar-e-Sharif in north-central Afghanistan, Staff Sgt. Tom Hinman stood inside a skeleton as it cast long, thin shadows under the blazing sun.

“This used to be an aviation maintenance building, so there were Black Hawks, Chinooks, and Apaches in here,” said Hinman, standing on the concrete pad with only thin steel tubing remaining overhead after the tent skin had been removed.

Around Hinman, soldiers clad in camouflage uniforms and hard hats used trucks and forklifts to pull down the building, piece by piece, putting sweat and muscle behind drills, hammers, and screwdrivers. The job was not easy; expanding pins and screws had been buffeted by wind, sand, and grit for years, and had been baked in the Afghan heat.

The Wisconsin soldiers have toiled in triple-digit heat since early June, typically starting early in the morning and finishing mid-afternoon. Because of the extreme conditions, they usually work 30 minutes and rest 30 minutes.

Each soldier guzzles 12 to 20 half-liter bottles of water and sports drinks each work shift. They wear gloves because metal tools and equipment left out in the sun can scorch skin. Power tools overheat, so the unit has resorted to keeping batteries in coolers.

Because of the threat of “green on blue” attacks — a two-star general was recently killed by a gunman in an Afghan soldier’s uniform — squad members take turns pulling “guardian angel” duty each hour to watch over the squad’s weapons and keep an eye on the work site’s perimeter.

Once bustling areas that buzzed with aircraft, rows and rows of tents, dining facilities, and tactical operations centers are now ghost towns, some with tumbleweed and dust blowing through.

Soon the post office will close and soldiers serving here will be able to send and receive mail only once a week. Later the dining facilities, gym, USO center, and other amenities will shut down, and finally most of the U.S. soldiers will leave. More than 1,000 troops plus hundreds of civilian contractors were living at the base this summer, but their numbers will dwindle to a few hundred by year’s end.

Thousands and thousands of sandbags — which most Army privates and specialists have spent innumerable hours filling at some point in their careers — are being returned to the terrain where they originated. Electricians are pulling miles of wires from buildings.

“They’re tearing down basically a small city, and that’s incredibly hard,” said Col. Paul S. Sarat Jr., commander of U.S. forces at Camp Marmal. “If they can recover 50 percent of the equipment, it pays for itself to get that back. But because of the cleverness of the unit, they’re saving 80 percent, which is great during hard fiscal times.”

It all feels strange to Grob and Kramer, who vividly recall Afghanistan at the start of the war. “I remember when I was here in ’01-’02 — it was so hard to get building materials. And now everything is just laying around,” said Grob. “The other day I opened a [shipping container], and it was filled with plumbing materials. I thought, ‘Oh, I really could have used these 12 years ago.'”

Meg Jones’s trip to Afghanistan to embed with Wisconsin National Guard troops was supported by the Pulitzer Center on Crisis Reporting.

A version of this article was previously published in the Milwaukee Journal Sentinel.