At a wildlife rescue center south of Phnom Penh, bears that would have otherwise faced a grim fate -- either killed for their meat, or milked for their bile -- get a new lease on life. 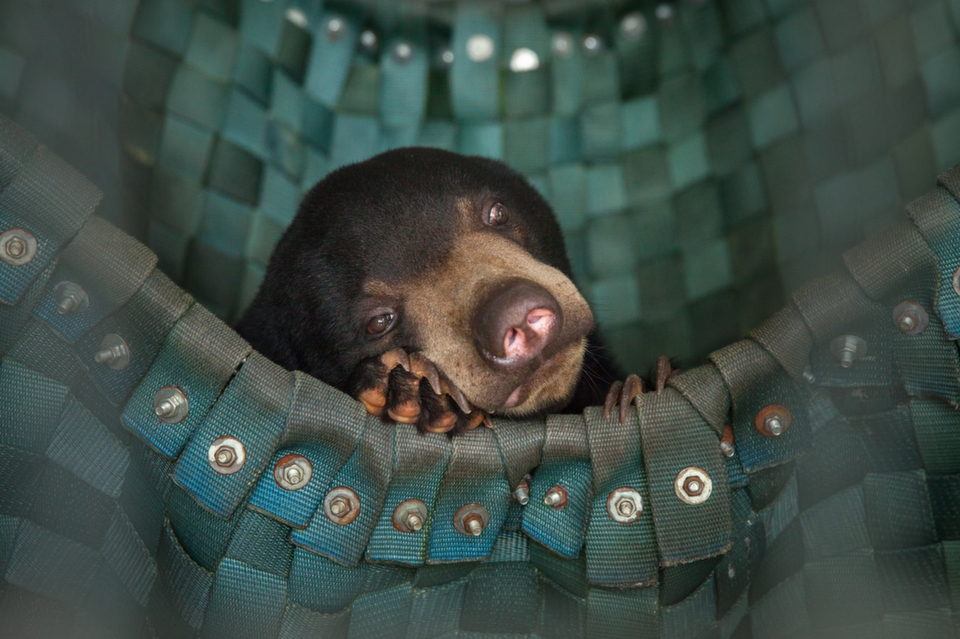 The more than 100 bears who reside at the center are the lucky ones — animals that were rescued from a very different fate. In his piece for Foreign Policy, Cambodia-based journalist Robert Carmichael writes about the illicit trade in bears and bear parts throughout Asia. It’s an industry that typically receives less attention than other areas of wildlife trafficking: elephant poaching, for instance, or the trade in rhino horns. But the bear trade remains big business — bear paws smuggled into China can be sold for 20 times what they cost to purchase in Russia, for instance — and is certainly no less cruel. Animals like the sun bear pictured above are captured and kept on so-called bile farms, where bears are kept in tiny cages in order to extract bile — a digestive fluid used in traditional Asian medicine — from their gallbladders.

Over the last 18 years, Phnom Tamao has provided a sanctuary for 180 rescued bears, from adults to animals just a few weeks old. The center hopes to release them eventually, but for the time being, habitat loss and persistent poaching makes their release too risky.

Above, a sun bear takes a nap in one of the hammocks at the Phnom Tamao Wildlife Rescue Center. 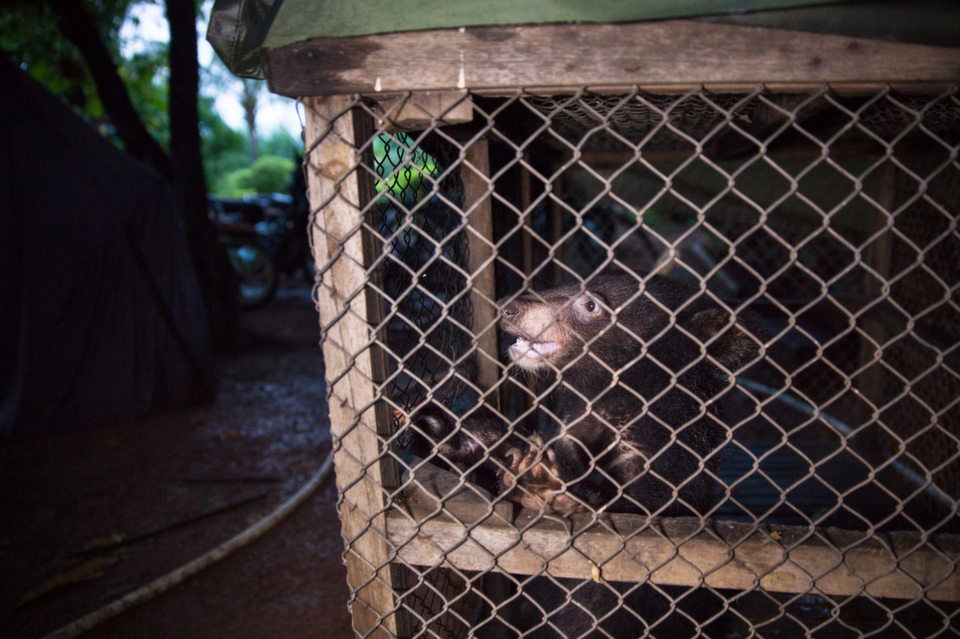 A five-month-old moon bear cub rescued in western Cambodia waits to be taken to Free The Bears’ compound at the Phnom Tamao Wildlife Rescue Center some 250 miles away. 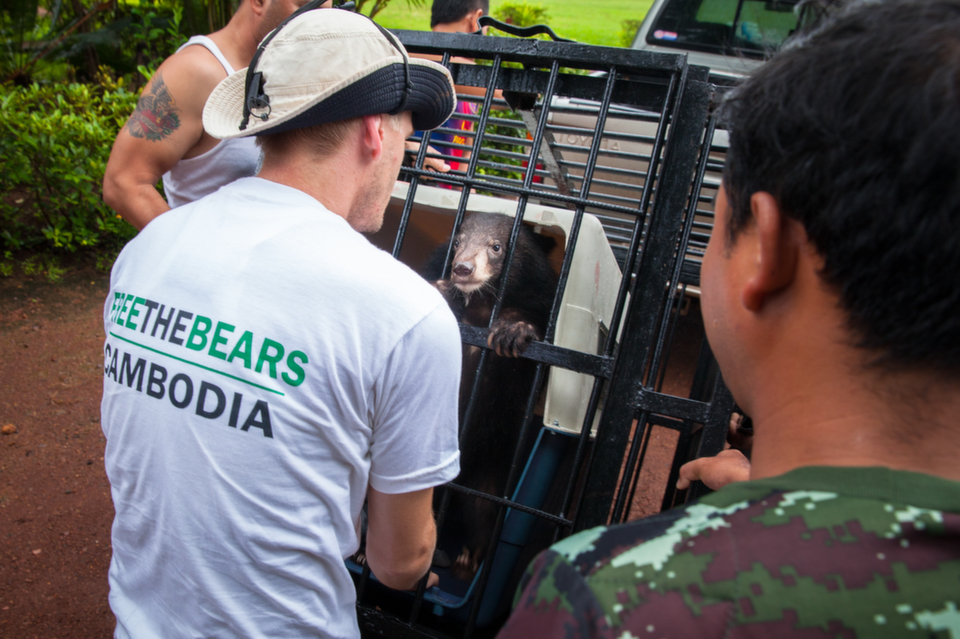 Nev Broadis, the regional director of Free The Bears, tries to calm the bear cub before the nine-hour drive from Samlaut district in western Cambodia to the rescue center at Phnom Tamao. 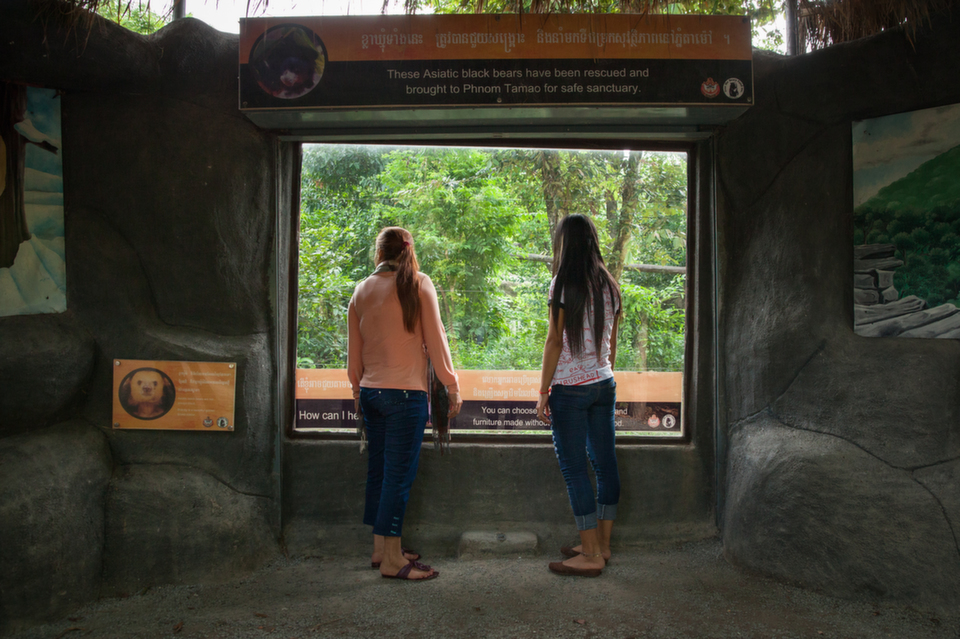 Cambodian tourists take a look inside one of the bear enclosures at Phnom Tamao Wildlife Rescue Center. 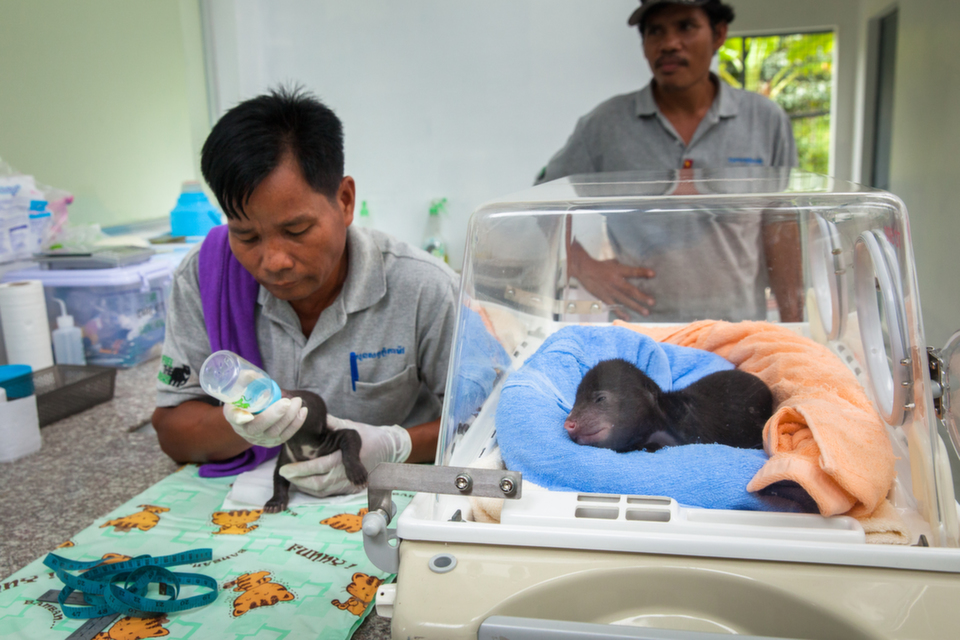 Cambodian keeper Mr. Heng feeds sun bear cubs Number 180 and Number 181  — nicknamed Jammy and Donut — after they are measured and weighed at the bear quarantine center at the Phnom Tamao Wildlife Rescue Center outside Phnom Penh. 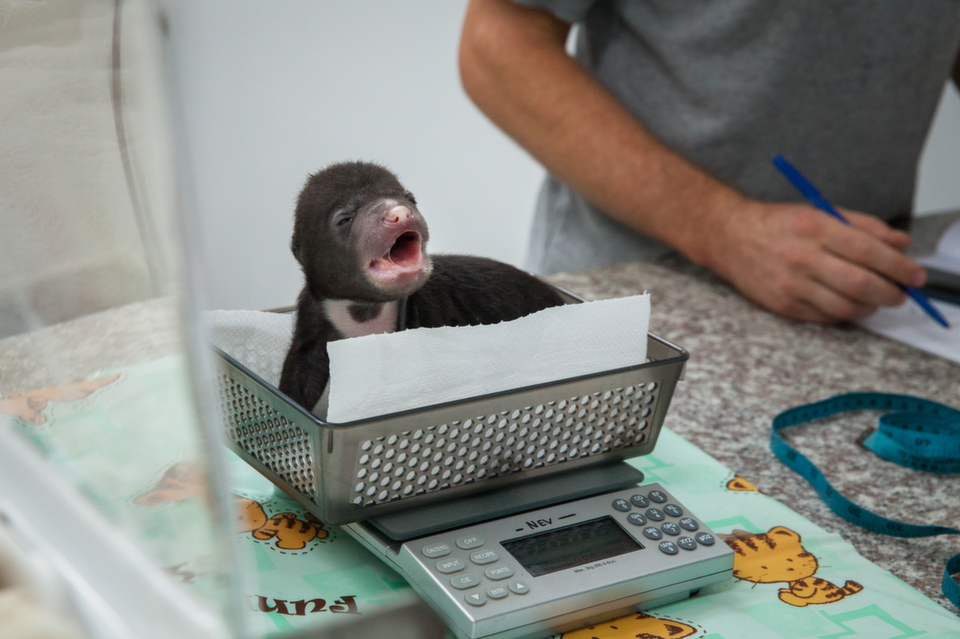 Sun bear cub ‘Jammy” is weighed after being fed at the Bear Quarantine Center at Phnom Tamao Wildlife Rescue Center. The cubs are closely monitored during the first months. “Taking care of such tiny mammals is a significant challenge,” says Matt Hunt, chief executive of Free The Bears. 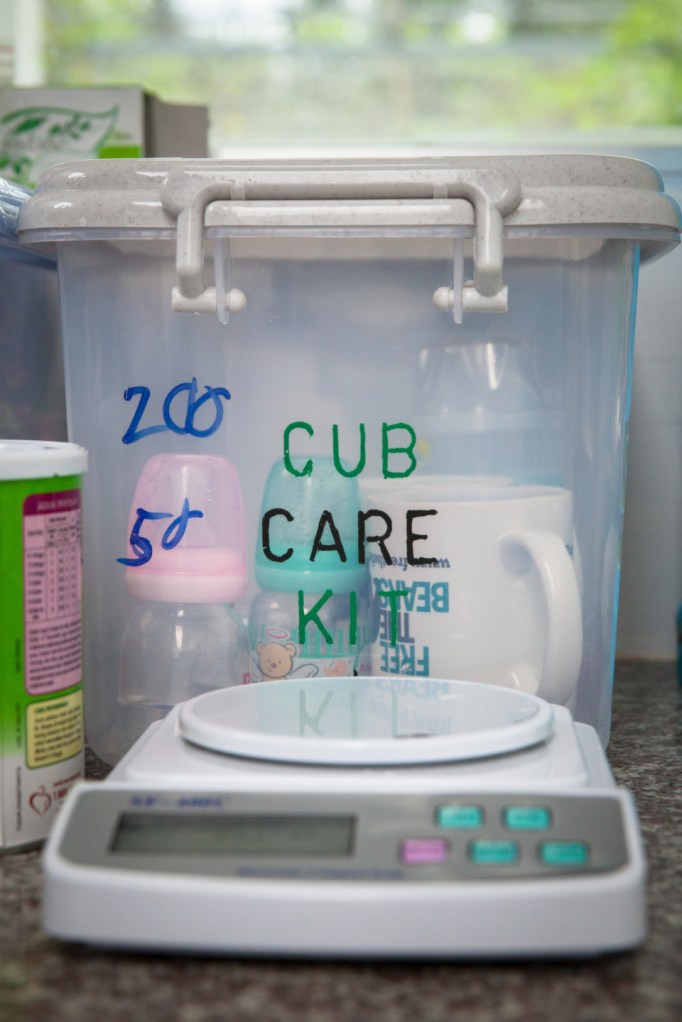 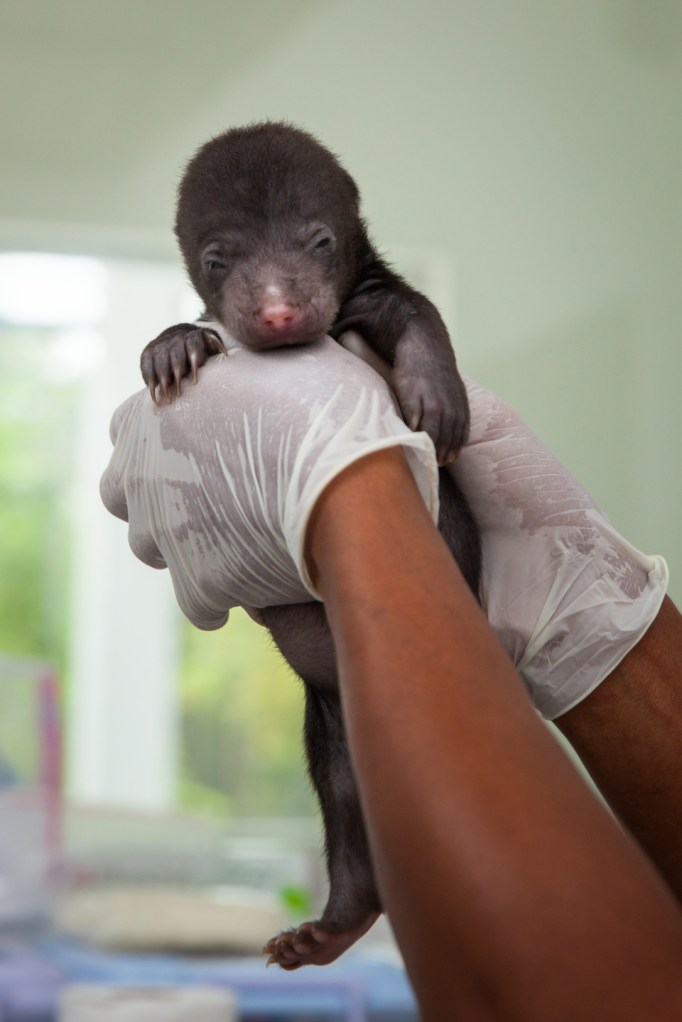 Sun bear cub Number 181 gets ready to be fed at the bear quarantine center in Phnom Tamao Wildlife Rescue Center. 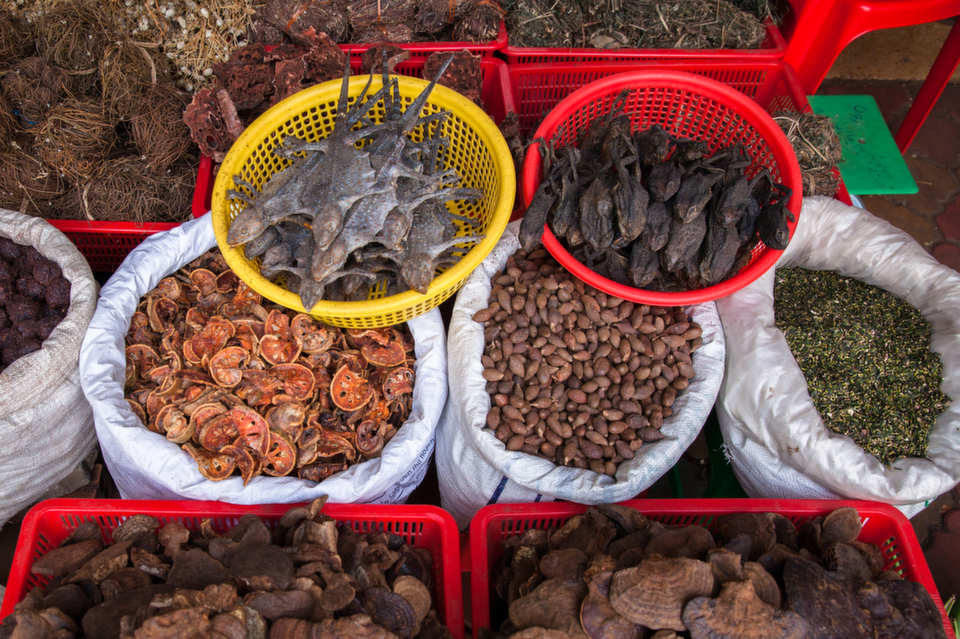 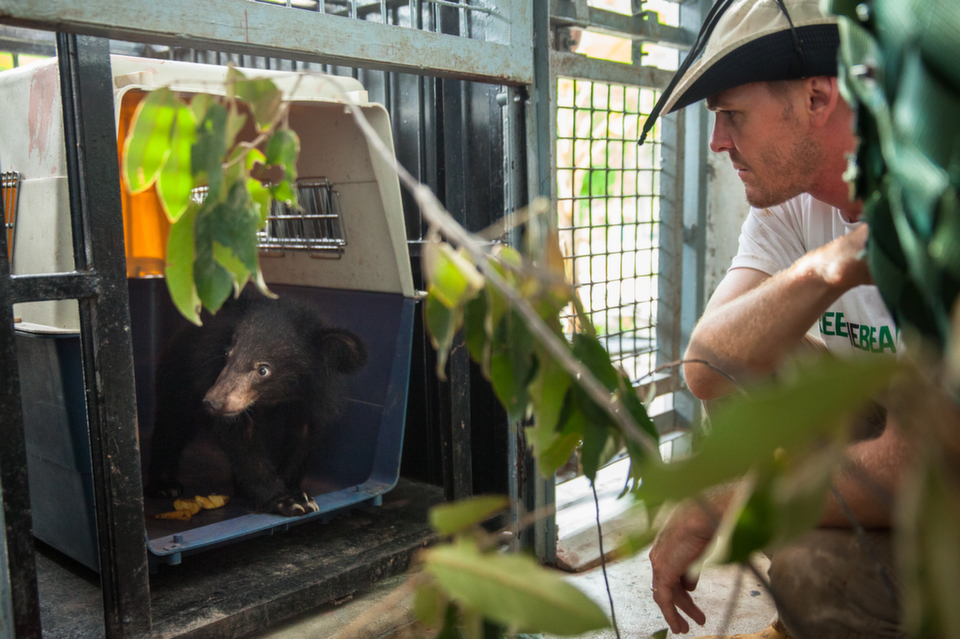 Free The Bears’ Regional Director Nev Broadis waits for moon bear cub Number 182 to voluntarily settle into his new home at the quarantine center at the Phnom Tamao Wildlife Rescue Center. “He’ll be able to rest and take on some good food. The future’s looking bright for this little cub,” he says. 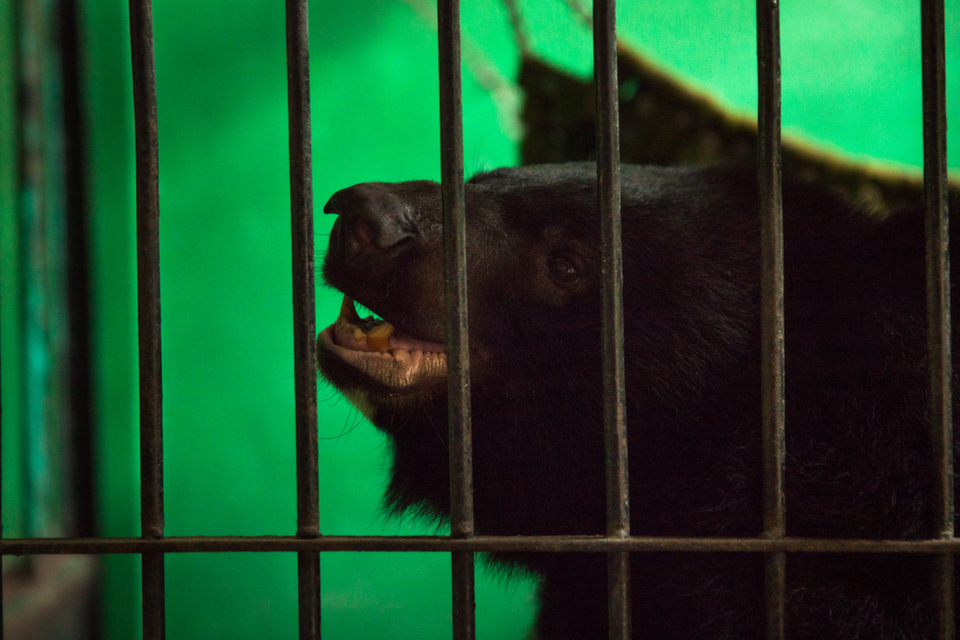 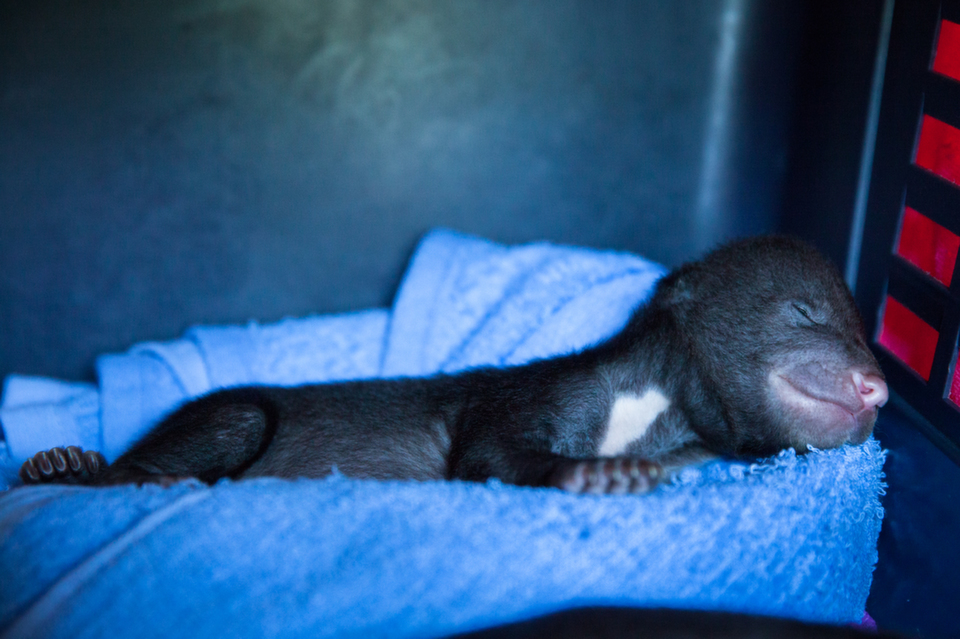 Sun bear cub ‘Donut’ naps inside a crate minutes before being fed at the bear quarantine center at Phnom Tamao Wildlife Rescue Center.