Rebecca’s War Dog of the Week: A Veteran and His Therapy Dog, Iris

By Rebecca Frankel Best Defense Chief Canine Correspondent It was not love at first sight. When Kent Phyfe first saw Iris, a diminutive black Labrador retriever, his first thought was that there’d been a mistake. True, he hadn’t offered any specifications for the service dog he was about to receive. Actually when he was asked ...

It was not love at first sight.

When Kent Phyfe first saw Iris, a diminutive black Labrador retriever, his first thought was that there’d been a mistake. True, he hadn’t offered any specifications for the service dog he was about to receive. Actually when he was asked if had any preferences of any kind, his only reply was, “four legs.”

But now, looking over the dog in front of him, doubt took hold. How in the world, he wondered, would this animal be able to give him the physical support he needed? He was nearly three times her size.

But the trainer who’d been helping Phyfe — the one who’d been to his home spending hours watching and listening and who knew his physical limitations — had marked Iris for Phyfe the day she set foot in his house. “Don’t kid yourself,” she told him when she saw his disbelieving expression as he faced the dog in front of him. “She’s stronger than you think.”

And she was. Iris, a 60-pound Lab-Chow mix, more than manages the roughly 200 pounds of Phyfe’s fully body weight that he presses into her back to help him maneuver around. The dog is able to brace his weight so that he feels secure; he knows she will not let him fall.

Iris is one of America’s VetDogs, a certified non-profit started by the Guide Dog Foundation in 2003. She keeps watch on him almost every waking moment with an unblinking focus on her charge and an intensity to her gaze that is downright eerie. Iris’s eyes are a beautiful color, rich like a deep amber ale. On the rare occasion that she doesn’t stir when Phyfe rises to go to the bathroom, she will without fail appear outside the closed door the moment he emerges. Her urgency is magnified when the two are alone together in the house because she knows she’s the only one around if he should need help.

Phyfe, 51, was retired from the Army after he caught an infection in his heart that ruined his aortic valve in 1996. He was sent to Walter Reed, which was the beginning of more than 15 years’ worth of medical ailments and complications — often debilitating and painful — that have increased steadily.

Phyfe has cardiogenic syncope, which is related to the traumatic brain injury (TBI) that he sustained during his service. Perhaps the most frightening element of this condition is that it causes fainting and loss of consciousness without warning, the shift in his heart is so slight that even he can’t predict or feel its onset. But it is something that Iris can sense, and she lets Phyfe know it. And when she alerts him, he can change the way his heart is beating by shifting his body, adjusting his breathing, in effect, giving his heart a little Heimlich maneuver. 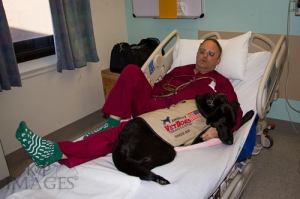 Phyfe relies on Iris for other things too. He is losing his hearing and his sight is worsening — but he jokes that he doesn’t know which will go first, laughing easily as though we’re talking about something delightfully trivial. It’s information he shares without any embarrassment or any trace of woe. Instead he is determinately positive, quick to point out the silver lining in the regular (and long) treks he makes to see his doctors. (“You can’t complain about being taken care of, can you?” he says.) These medical problems have kept him on disability, unable to work for many years, but that doesn’t mean he hasn’t been busy. Phyfe is a relentless volunteer for a host of organizations and he devotes time to championing the organization that brought him Iris — America’s VetDogs.

According to Phyfe, it’s Iris who’s made the difference in his physical wellbeing and very likely played a major role in his positive attitude. But he’s not the only one who believes her care is affording significant results. The doctors who’ve spent years poking and prodding around his heart, outfitting it with electrical monitors, marvel at the change in his health — or the management of it — since Iris entered his life in 2011.

So much of the success of these partnerships, like the one between a service dog like Iris and a veteran like Kent, depends on a commitment to work — the training that makes Iris so indispensable must be continuous. And bringing a service dog into your home doesn’t mean all your problems are solved. In fact, that’s usually when the hardest work begins. Having a service dog, Phyfe says, is also about managing expectations. Years before he had Iris — or even had the need for her — Phyfe watched his father, who had lost his sight, struggle with a guide dog. The dog had been a young dog, a German shepherd with more energy and spirit than his father, by then an old man, could manage. “He thought the dog would see for him,” Phyfe told me. “But that’s not how it works. It’s not, you get a service dog and everything is right.”

His father’s experience prepared Phyfe for the working relationship that he and Iris would have to build together. Still, it took a good six months before he had full confidence in their abilities as a team, to build the depth of trust needed to foster the bond they have now.

But, when compared to the norm, that’s rather quick, says Kim Stasheff, a trainer for American VetDogs with more than a dozen years experience under her belt.

Stasheff has worked with people who, for health reasons or because their injuries left them with disfigured, would not go into public willingly. But, Stasheff says, this is exactly when the dog would put to use something a human could not offer, and something that wasn’t a part of these dogs’ training. Where before these people did not have the means or the courage to leave their homes, it was the dog that pushed them to take the leap. Whether it was because the dog needed a walk, or the dog provided the bolstering comfort, or, sometimes, Stasheff says, the dogs drew attention away from people in a positive way. “They’ll say, ‘Oh, look what a beautiful dog.'”

Iris has changed Phyfe’s life, for the better. And in this way these service dogs act as a literal passageway back to a life that’s a little less lonely, a little less limited.

Thomas E. Ricks covered the U.S. military from 1991 to 2008 for the Wall Street Journal and then the Washington Post. He can be reached at ricksblogcomment@gmail.com. Twitter: @tomricks1
View
Comments
Tags: North America, Rebecca's War Dog of the Week, Veterans, War