Finding Refuge on a Minefield

Civilians fleeing Taliban attacks in North Waziristan, have taken shelter across the border in Afghanistan where the weapons of an old war are rising up to haunt them.

Photographs and story by Andrew Quilty 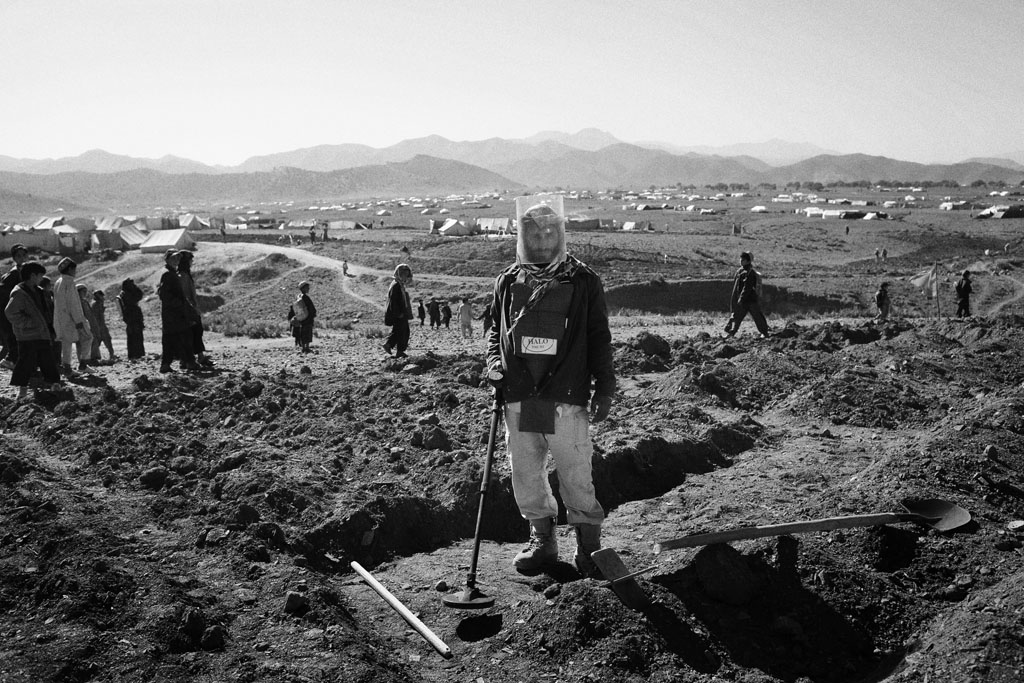 KABUL — A whistle sounds and all of a sudden the chorus of excited “Aye, Bee, Cee, Dees” emanating from more than a dozen square white tents comes to an end.

Then a couple of hundred children carrying backpacks decorated with cartoon superheroes and princesses disperse from the tents, tumbling out in all directions.

Half of them scatter across a dirt road recently cut by a bulldozer and onto a triangular expanse of land, furrowed like a large vegetable garden ready for seeding.

The charging group of children parted like a wave, splitting on either side of a man who is waving a metal detector back and forth across the ground hypnotically as if he’s combing a beach for lost valuables. The man is wearing a heavy, protective blue vest with an attachment that hangs loose over his groin and a clear Perspex shield that covers his face like a welder’s mask.

Maybe a hundred children have just run across a minefield. 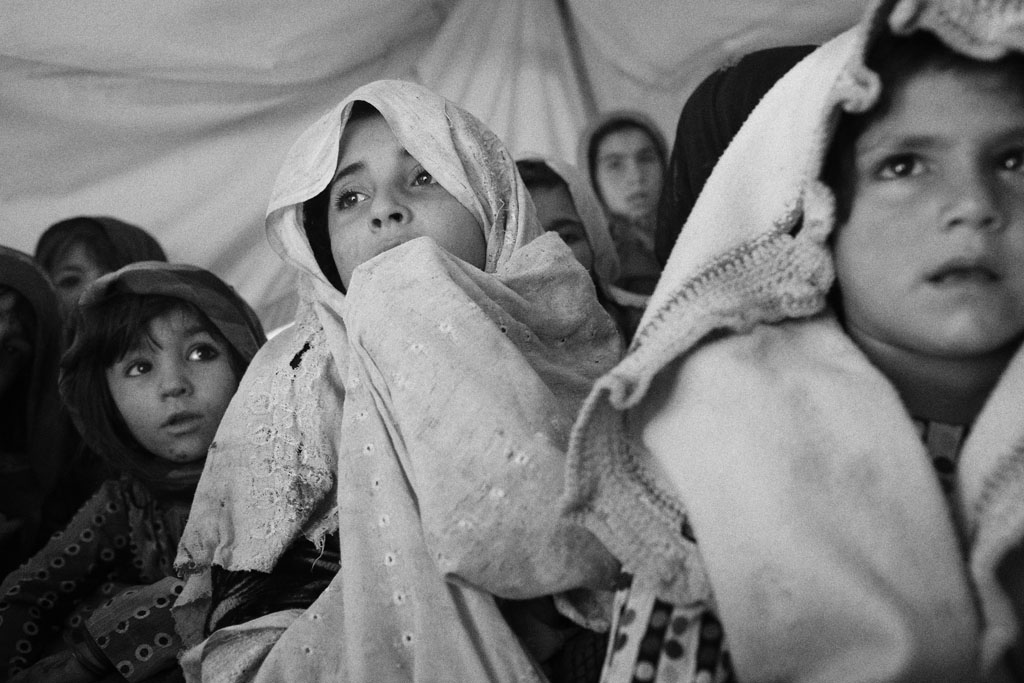 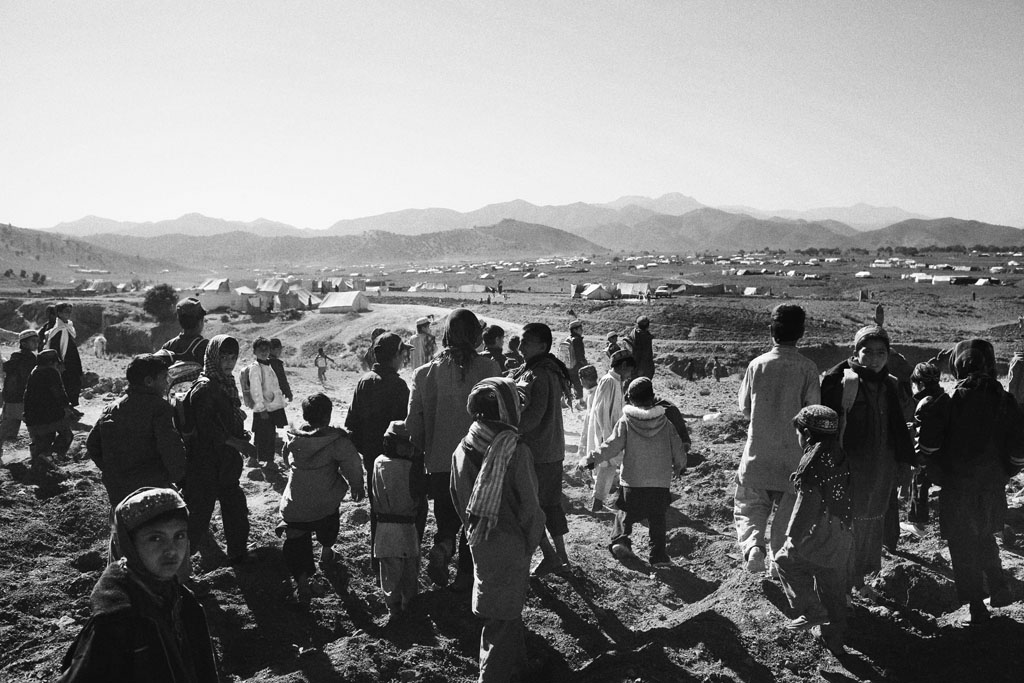 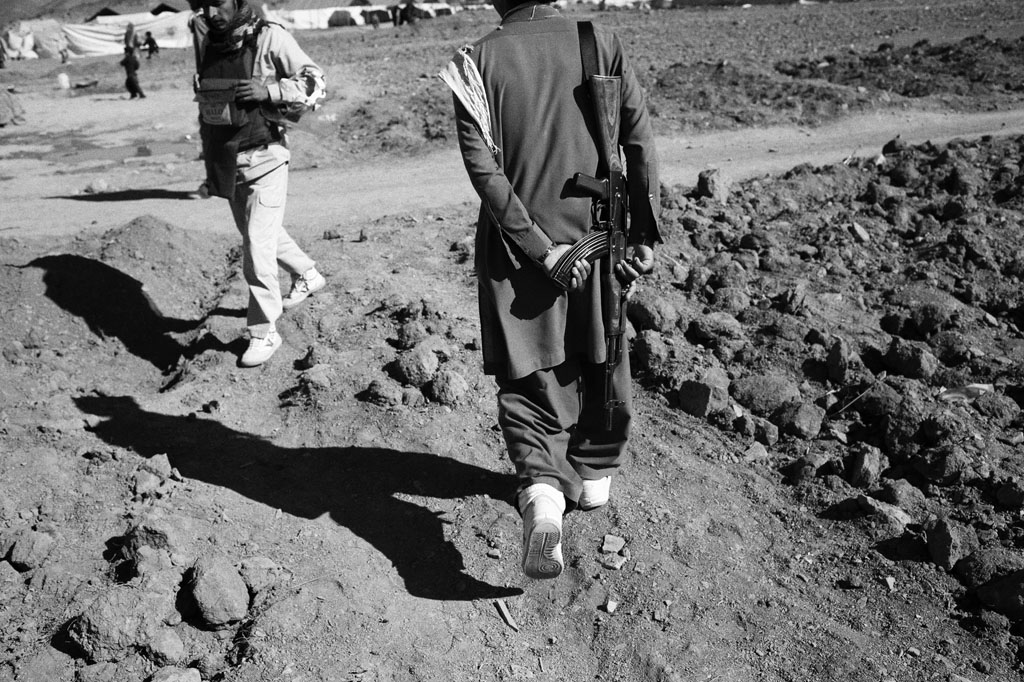 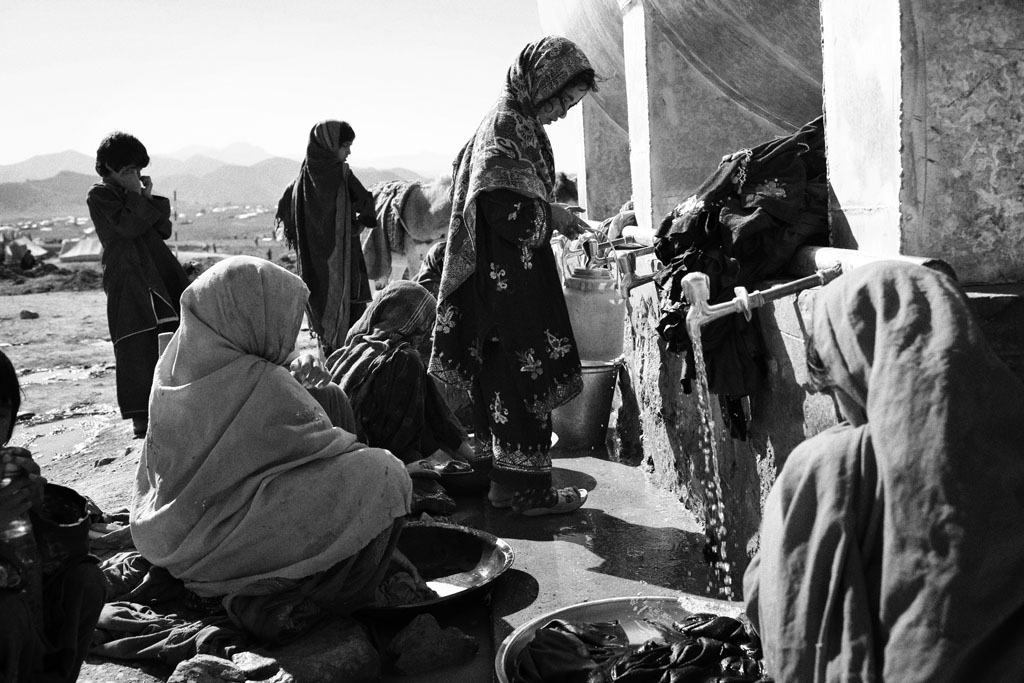 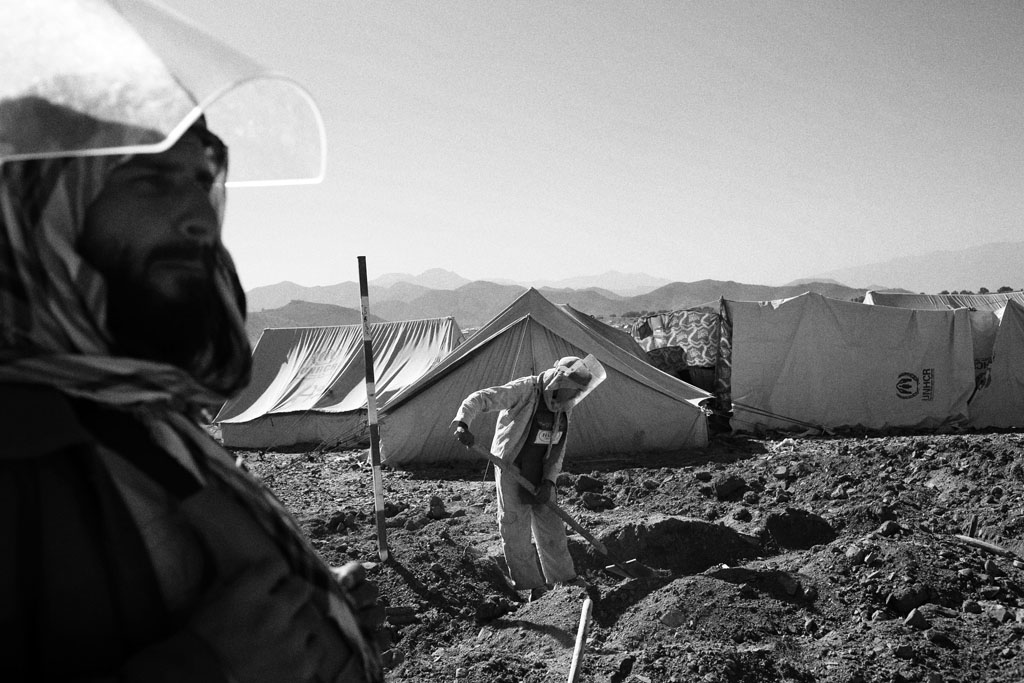 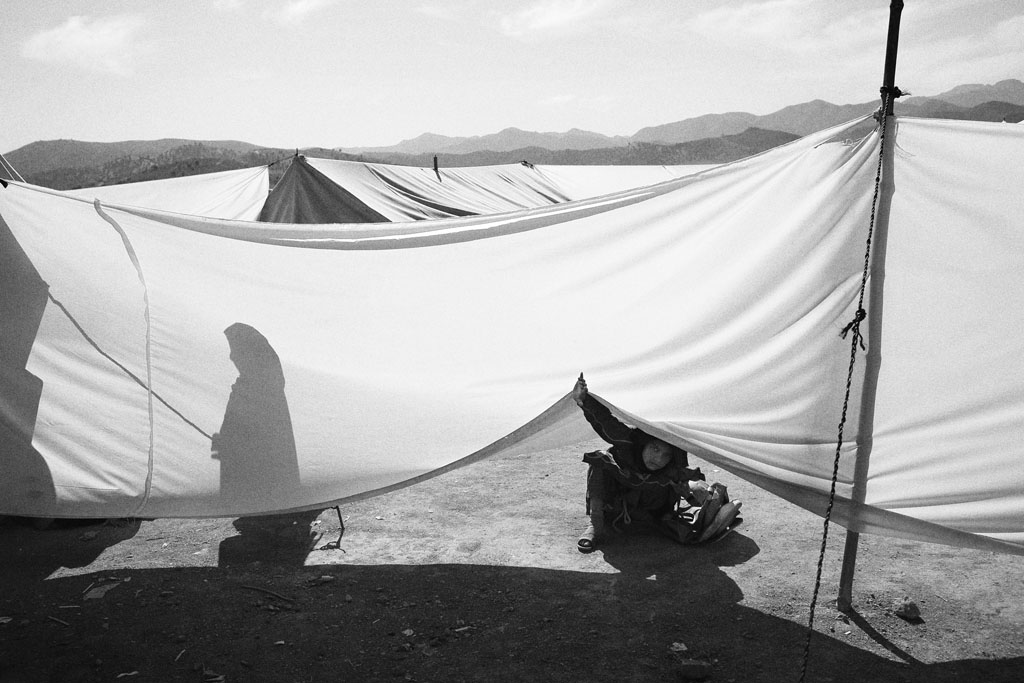 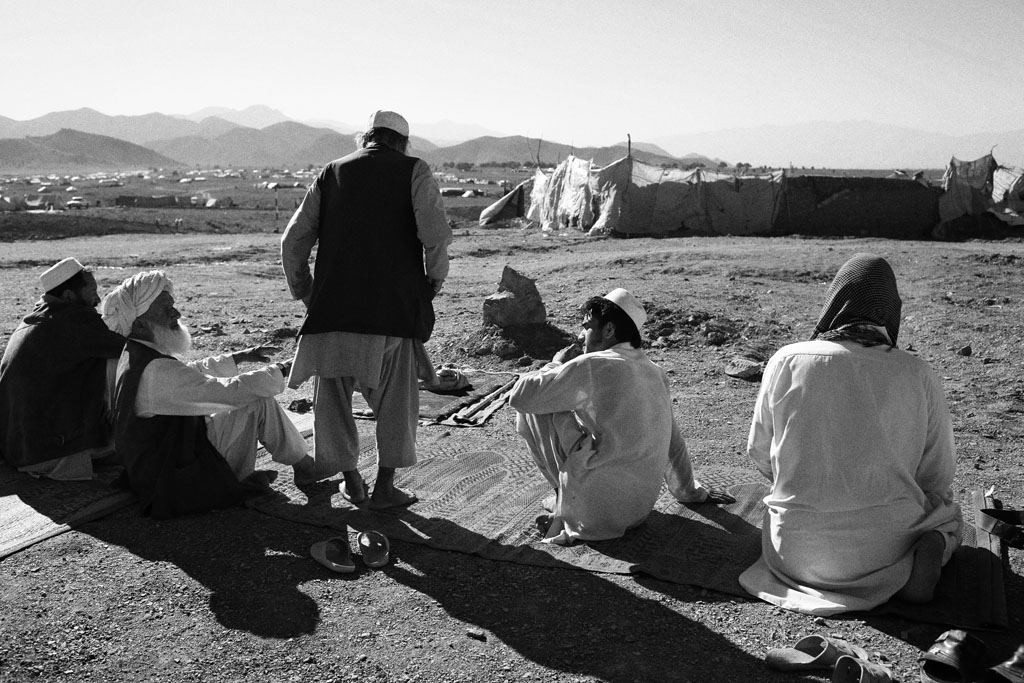 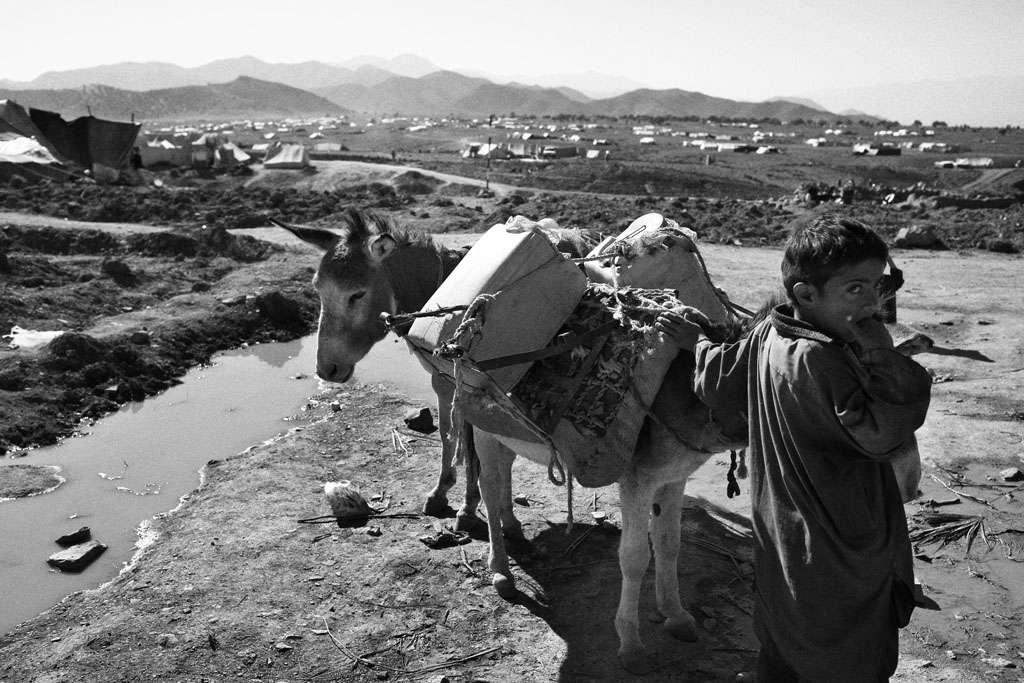 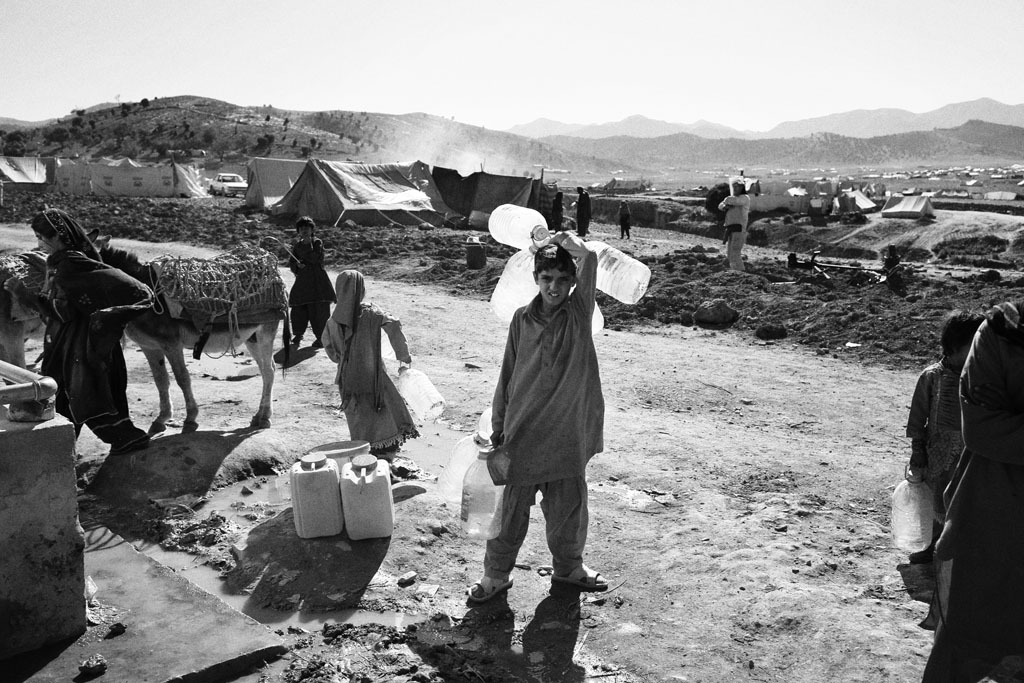 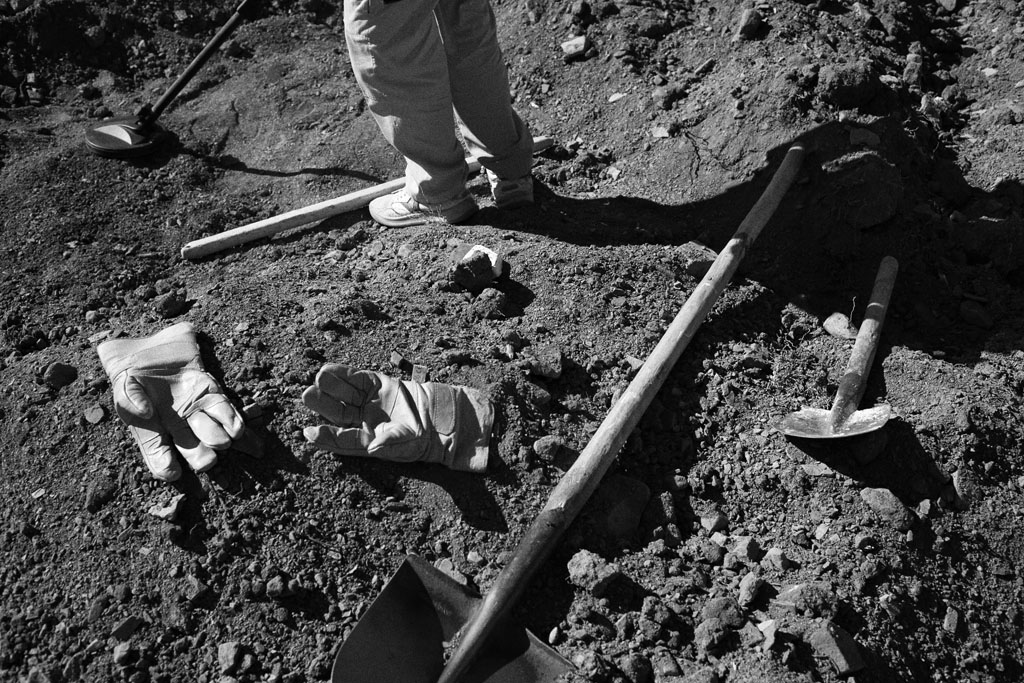 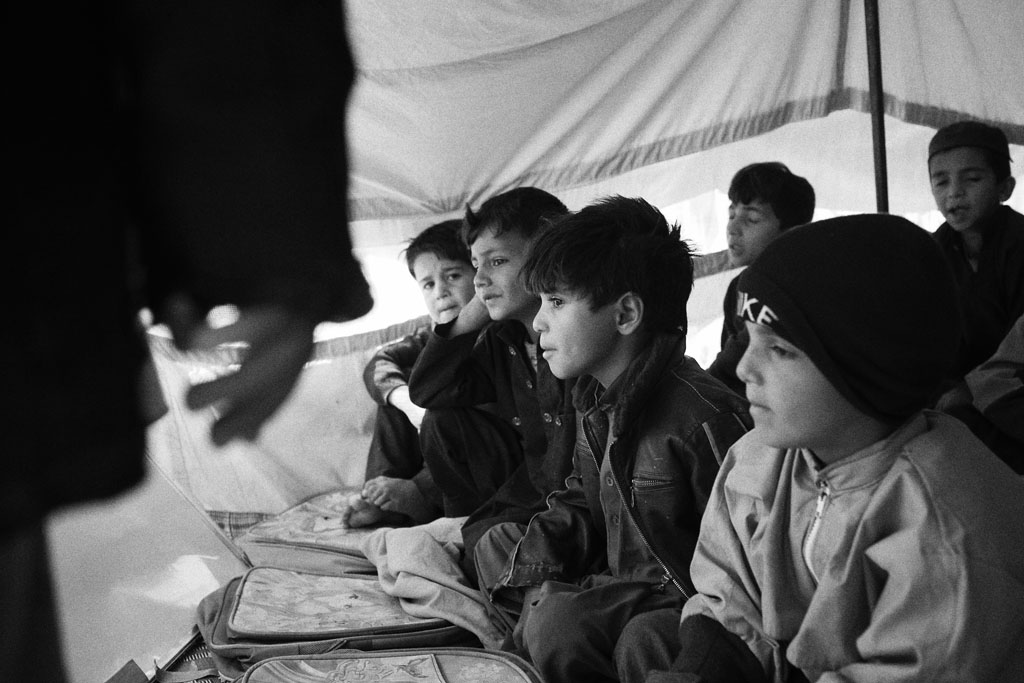 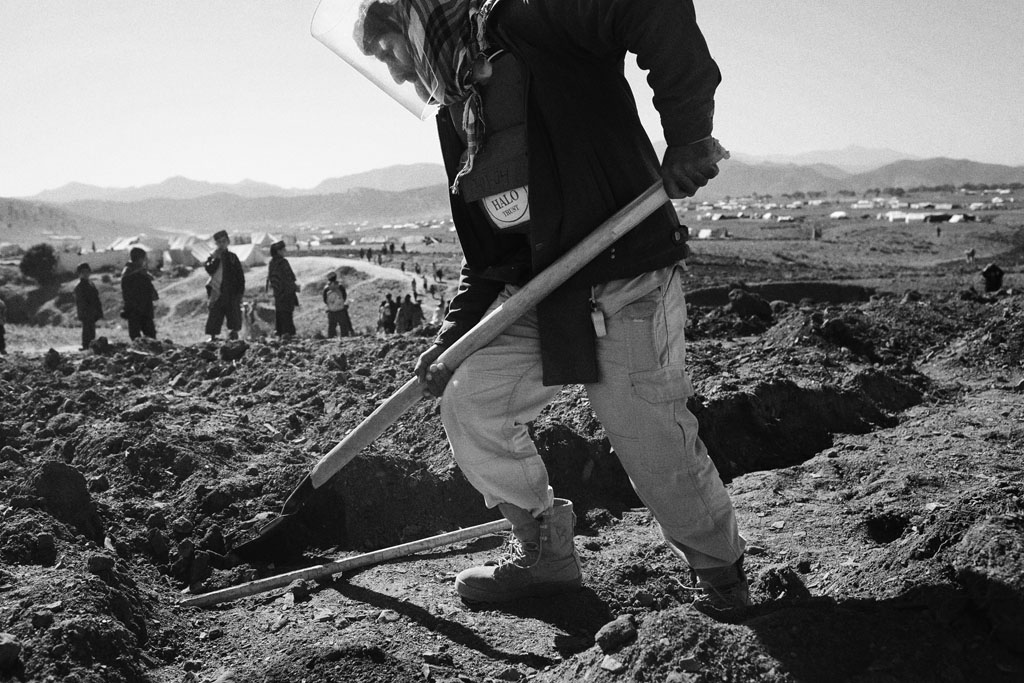 Girls in a temporary classroom in the Gulan Refugee Camp for North Waziristani refugees. The school, run by the Norwegian Refugee Council, has approximately 2,000 children enrolled.

Children leave school for home at midday. To get home many of the children walk across a stretch of land which is being de-mined.

A security guard walks by a de-miner as he works at a site in the Gulan refugee camp.

Women and children fill up water containers at the camp just across the Afghan border in the province of Khost.

De-miners work beside tents in the refugee camp.

A young girl peaks beneath a sheet that divides the boys from girls during school.

Men pray at a makeshift mosque on a cleared and marked patch of land at Gulan Refugee Camp. The mosque is positioned no more than 5 yards from a stretch of land being demined.

A boy stands with his mules after filling up water containers.

A de-miner works at a site mere feet from a camp where two families are living.

Boys sit during school time in the temporary classroom tent.

A deminer works at a site in the Gulan refugee camp.

Following several high-profile attacks on Pakistani soil by Tehrik-i-Taliban (the Pakistani Taliban), including one at Karachi's Jinnah International Airport on June 8, which resulted in 36 deaths, the Pakistani military launched an offensive that targeted insurgent hideouts in the Federally Administered Tribal Areas, including North Waziristan, which borders Afghanistan.

The ensuing exodus saw some 100,000 refugees fleeing North Waziristan since late June and crossing the border into eastern Afghan provinces such as Paktika and Khost.

While many sought shelter with family and tribal groups that spread far and wide across this border region, an estimated 3,400 families found themselves in what was fast becoming a sprawling refugee camp -- Gulan -- on land granted by Khost's provincial government, in Gurbuz District, a few miles across the border in Afghanistan.

This area was supposed to be a safe haven, and free of mines. But as heavy machinery was brought in to install camp infrastructure, it proved to be anything but. Anti-tank mines surfaced as latrines were dug. Several were even uncovered by families burying tent poles only inches below the surface.

“It was the only free land in the district,” says Khost’s governor, Abdul Jabbar Naeemi, by phone. “No one was aware [that the land was mined] at the time.”

Afghan elders from local villages who had fought with the mujahideen against the Soviets in the 1980s recognized the danger and began to warn camp authorities of what they knew lay buried underneath the ground.

The plains on which Gulan camp sits rise gradually to the hills that continue toward the border with Pakistan five miles to the east. Noor al-Hoda, a senior deminer at the camp, explains that these hills once hid precious mujahideen supply routes to Pakistan.

As has been well documented in books like George Crile’s Charlie Wilson’s War, much of the military hardware that passed across the border can be traced back to the CIA, whose clandestine campaign against the Soviets involved arming and financing the mujahideen.

In a phone conversation with Foreign Policy, the director of the Mine Action Coordination Centre of Afghanistan, Mohammad Sediq Rashid, said that the mines being found inside Gulan camp “came through Pakistan and were planted by the mujahideen [in the 1980s].” When asked who supplied the mines initially, Sediq said that while “it’s difficult to know exactly,” they were “definitely from the West … from the United States.”

And so a nearly 30-year-old conflict that claimed an estimated 1 million Afghan lives has resurfaced, literally, to wreak havoc once again. 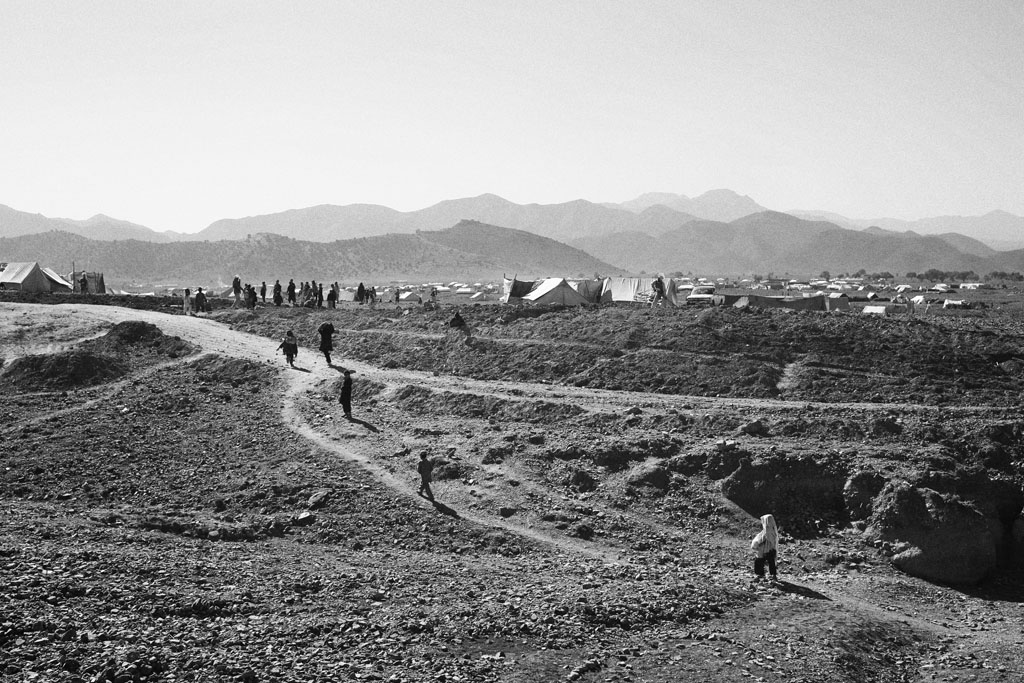 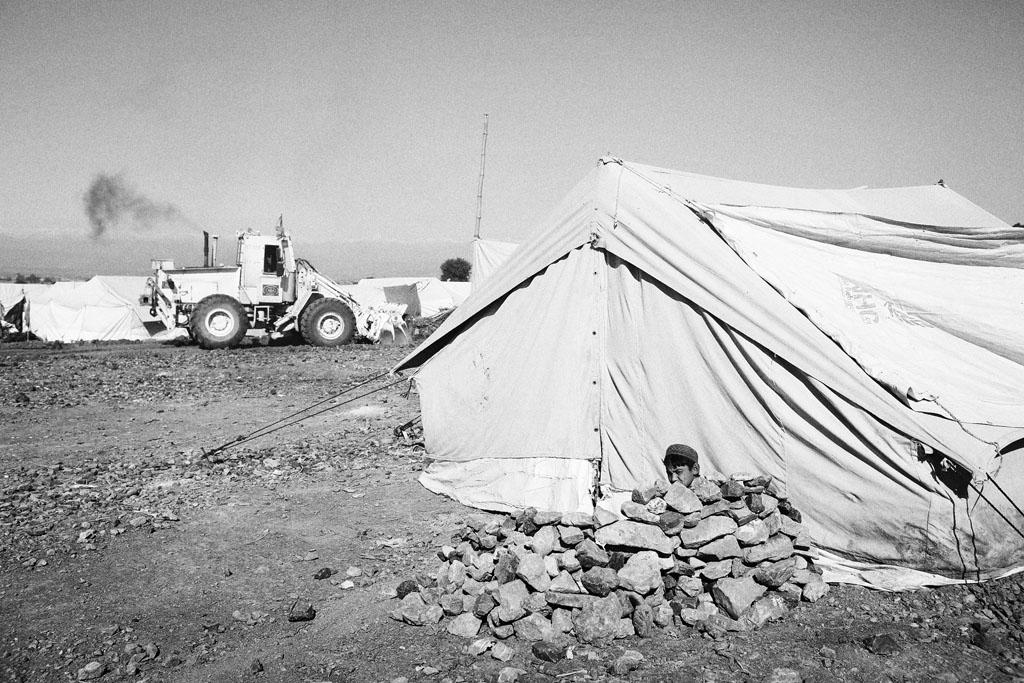 Children walk home after school at midday at Gulan Refugee Camp; A young boy builds a fort out of rocks by his family's tent as a HALO bulldozer plows the earth for mines nearby.

The threat was urgent enough that HALO put other clearing projects in Afghanistan on hold to focus efforts on the camp before an accident occurred. And though HALO has deployed seven survey, manual demining, and mechanical demining teams since July, the work has been painfully slow.

After I watched this work from the periphery for an hour or more, there seemed to be little evidence that a real threat existed, and so I began to follow a group of children returning home with water containers lashed across the backs of ragged donkeys.

Before I could get more than 20 feet from the supposed safety of the dirt road, the voices of two deminers yelled out. I stopped in my tracks. “It’s risky,” one warned me (via an interpreter), shaking his head.

Across the sprawling camp -- deliberately structured to reflect family and tribal affiliations and origins -- five schools (set up by the Norwegian Refugee Council) host approximately 2,000 children, nearly half of all children within the camp.

Through the schools, the children receive mine-awareness training taught by Afghan Red Crescent Society mine-risk education teams. But kids will be kids, and it is near impossible to keep them from straying onto the ground dotted with stones dipped in red paint -- the “risk” areas -- that remain throughout the camp.

And it’s not just the children.

Griffiths, HALO’s operations expatriate in Afghanistan, told me that “though the numbers [of mines and live ordnance] are low, the threat is huge. If one detonates under a minibus, then all the occupants could be easily killed. It is miracle it hasn’t happened already.”