Lieutenant Colonel Douglas A. Pryer considers anything meant to "break" another human to be torture. And he's sick of hearing from torture advocates that it's should still be considered a relevant interrogation tactic. 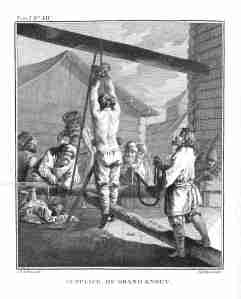 News sources are reporting that the long-awaited release of the summary of the Senate Intelligence Committee report on the CIA’s torture program is just days away. Thanks to anonymous sources, we already know some of what this summary will say: “enhanced” interrogation techniques (EITS) yielded little, if any significant intelligence, and the CIA misled the government and the public about both the severity of its methods and this program’s success.

Predictably, torture’s acolytes are already responding: The report was a Republican witch hunt led by Democratic Senator Dianne Feinstein. Facts were selectively culled by partisan staffers in order to paint the program in the worst possible light. Other staffers could’ve selected different facts and reached completely opposite conclusions. Sure, there were problems with the program, but these techniques really did “work.” They saved lives. Someday, the truth will be revealed, and the men and women who performed this “hard, dirty work” for good ends will be lauded as the true heroes they are. In the mean time, trust us regarding this program’s success. WE KNOW.

Hogwash. I’ve never believed a word of what torture’s advocates say, and neither should you.

When helping to manage interrogation operations for the 1st Armored Division (1AD) in Baghdad from Jul-Nov 2003, I regularly asked the interrogation cell at Abu Ghraib to re-interrogate former 1AD prisoners. This was at the height of Abu Ghraib’s use of EITs and committing other notorious abuse—abuse I had zero idea was occurring. The EITs employed at Abu Ghraib included forced nudity, cold temperatures, sleep deprivation, and the use of military working dogs.

Today, I judge any tactic designed to inflict physical or mental pain severe enough to “break” someone to be “torture.” As I look back on my experiences then, I have to conclude that I unwittingly contributed to torture. It bothers me today that I was part of the causal chain that led to the torture of maybe a hundred Iraqis, some of whom may not have even been insurgents (at least not before they were tortured).

Still, I acknowledge that torture very occasionally produces desirable tactical information. For example, our Division Interrogation Facility (DIF) interrogated a young 16- or 17-year-old Iraqi kid who, when questioned by the brigade who had captured him, had talked about a former Iraqi colonel who was paying him to lay IEDs. When the brigade inspected the colonel’s house, they learned the kid had told the truth. However, when DIF interrogators questioned the kid, he clammed up. He refused to even talk to us. When I later took command of the intelligence company supporting this brigade, I was told that, during the time period this kid was questioned, this brigade had tortured certain prisoners. One battalion had threatened to feed some prisoners to lions. (This made the news in late 2005, to our nation’s shame.) At the brigade detention facility, at least one mock execution had occurred involving fake blood. None of these illicit interrogations involved professional interrogators.

But, if true, is this an example where torture worked when a rapport-based approach could not have worked? Absolutely not. Simply because this kid didn’t respond to rapport-based approaches after he had been tortured doesn’t mean he wouldn’t have responded to the right rapport-based approaches before he was tortured. Believing that only torture could’ve worked is a version of the post hoc ergo propter hoc fallacy—because something followed something, it must be the only possible cause of the thing. I believe the kid would’ve ended up telling a lot more if he had been questioned from the beginning by a skillful professional interrogator. In fact, we may have even been able to recruit him to serve as a spy.

Some may argue that the reason military interrogators at Abu Ghraib weren’t effective was because they weren’t professional torturers. As Tony Lagouranis, an Army interrogator suffering PTSD from his experiences with torture at Abu Ghraib, Al Asad, and Mosul, said: “Of course, we never succeed in actually brainwashing anyone . . . Probably someone in this chain is a real professional, and if torture works—which is debatable—maybe they had the training to make sure it worked. But at our end of the chain, we had no idea what we were doing. We were just a bunch of frustrated enlisted men picking approved techniques off a menu . . . We were . . . acting like badasses when, in the dark art of torture, we were really just a bunch of rank amateurs.”

So, for these techniques to work at all, they need to be institutionalized. You need extensive training, and you need a lot of practice on real subjects. One hypothetical solution would be to expand Survival, Evasion, Resistance, and Escape (SERE) schools to serve as farms for professional torturers. One cautionary flag this raises, though, involves the number of amateurs who have gone through SERE schools as trainees, came away convinced that these techniques worked, and then went forth to employ these techniques to deleterious strategic and tactical effects abroad: such a solution would no doubt expand this problem. A much larger flag consists of what institutionalizing torture would do—has done, hopefully temporarily—to Americans’ and the world’s notions of whom America is as a nation.

Do we really want to raise and wave such flags so that we can implement illegal techniques that, at best, do not work nearly as effectively as legal techniques?

I know, I know. I need to be careful of particularism, extrapolating too much from specific examples, in this case, personal experiences. But while trying to make sense of my own experiences, I’ve also read extensively on the subject, and all that I’ve read reinforces the same conclusion: torture is an immensely impractical intelligence-gathering tool. Professional interrogators who have become truly expert at employing rapport-based approaches decry torture’s effectiveness as an intelligence-gathering tool. Yes, you sometimes get the truth, but this truth is rarely substantial and is typically buried in what I’ve heard professional interrogators call “the longest list of lies in the world.”

Those who claim that torture has more chance of success than rapport-based approaches have limited (if any) direct experience with these approaches.  They’re rarely real interrogators. Emphasizing the superiority of rapport-based approaches are such memoirs as Stu Herrington’s “Stalking the Vietcong,” Matt Alexander’s “How to Break a Terrorist,” Ali Soufan’s “Black Banners,” Orrin DeForest’s “Slow Burn,” and Eric Maddox’s “Mission: Black List #1.” Histories like “The History of Camp Tracy” and “The Interrogator: The Story of Hanns Joachim Scharff” teach the same lesson.

When the 9/11 attacks took place, nearly 3000 Americans lost their lives, and so many Americans lost their minds, U.S. Army interrogation doctrine (as expressed in the 1987 Intelligence Interrogation manual) had it right: “Experience indicates that . . . the use of force is a poor technique, as it yields unreliable results, may damage subsequent collection efforts, and can induce the source to say whatever he thinks the interrogator wants to hear.” Unfortunately, this doctrine—which reflected the practical experience of generations of interrogators—was thrown away by arrogant amateurs who thought they knew more than the professionals.

The question of “does it work” aside, there are HUGE strategic drawbacks to torture, such as how it undermines the rule of law, corrupts those who use it, undercuts military training, cedes moral high ground to our nation’s enemies, creates distrust among allies, sows dissension at home, serves as a source of recruits and donations for our nation’s enemies, creates irreconcilable enemies, and makes the ultimate goal of any conflict—its peaceful resolution—increasingly difficult.

Quite simply, for a mature democracy in the information age, there may be no surer tool for prolonging conflicts and shaping defeat than employing torture.

I don’t doubt that those who support our nation’s use of torture mean well. Regardless of what torture looks like in practice, they imagine ticking nuclear bombs and prophetic interrogators who know that, with that ticking bomb rapidly counting down, inflicting severe pain is the only possible way to get a bomber to tell where that bomb is. (Forget trying to get a skilled interrogator, a moderate religious authority, a member of the organization who has “turned,” the bomber’s loved ones, etc., to convince the bomber to talk.) But we mustn’t equate good intentions with knowledge or wisdom. Clearly, these well-meaning, patriotic souls have been duped by distorted reporting, their own unquestioned political allegiances, and far too many bad movies and novels.

Lieutenant Colonel Douglas A. Pryer is an active-duty counterintelligence officer who has deployed to Kosovo, Afghanistan, and Iraq. He has published one book and numerous essays on interrogation and other aspects of the human domain of war. The views expressed in this article are those of the author and do not reflect the official policy or position of the Department of the Army, Department of Defense, or the U.S. government.

Thomas E. Ricks covered the U.S. military from 1991 to 2008 for the Wall Street Journal and then the Washington Post. He can be reached at ricksblogcomment@gmail.com. Twitter: @tomricks1
Tags: Afghanistan, CIA, Torture & War Crimes