Economic and political data show that dire warnings about the pro-democracy protests have proven inaccurate.

The tents have folded. After 75 days of camping on the street, braving police crackdowns, occasional civilian attacks, and the city’s (admittedly mild) winter chill, Hong Kong’s pro-democracy protesters have cleared out. As promised, police moved in on Dec. 11 at 9 a.m. Hong Kong time to enforce a court order requiring demonstrators to vacate an encampment in the central business district of Admiralty, their last remaining stronghold.

There’s no doubt that Hong Kong has been changed profoundly — perhaps irrevocably — from a financial capital with a (somewhat unfair) go-along-to-get-along reputation to a city where politics sit front and center. Former high-ranking U.S. diplomat Kurt Campbell said at a recent Foreign Policy event that he had “rarely” been to a more politicized place after a recent visit. History will decide whether protesters, who have asked for a greater say in electing the Chinese territory’s leaders, or Beijing, which has emphasized its suzerainty over the former colony and refused to alter its own plan for election reform, will emerge as victors. In the short term, with a majority in the city now saying they are ready for the protests to end, Hong Kong society is surely more divided than it was before the occupation began in earnest on Sept. 28, when police there made the fateful decision to shoot dozens of tear gas canisters into crowds of mostly peaceful demonstrators.

But Hong Kong has proven resilient. Early predictions, especially by interested parties, warned that “multinational companies and investors” would consider relocating their headquarters and that “permanent” damage to the financial system would ensue as a result of protests. Mouthpiece outlets for Beijing authorities wrote of “unimaginable” consequences for protests they insisted were “disrupting social order and harming Hong Kong’s livelihood.” But economic and political data strongly suggest that, at least thus far, such disasters simply have not come to pass.

Hong Kong’s signature stock index is about where it started when protests heated up: 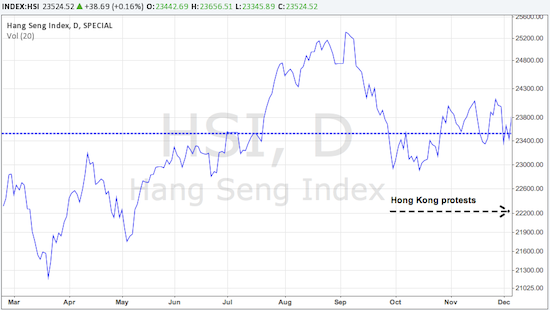 In retrospect, the most dire warnings seem hyperbolic. On Oct. 3, Hong Kong Financial Secretary John Tsang said that if protests were to persist, “permanent” damage to the financial system could result. Of course, Tsang could now plausibly reply that investors have simply realized the protests will end, and stock prices reflect that expectation — but in any case, it’s hard to find permanent damage in these numbers.

Hong Kong’s retail economy has done more business during the protests than it did at the same time last year: 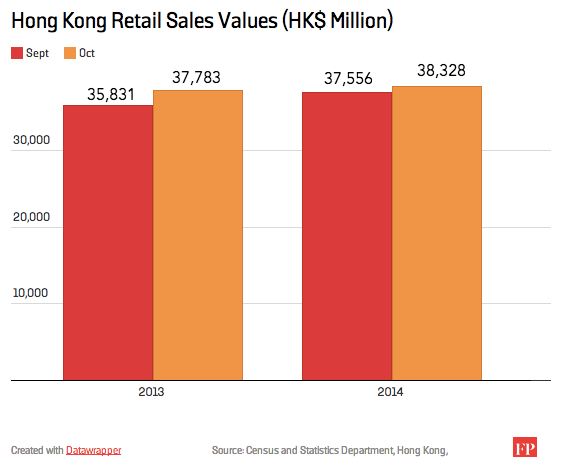 It’s an improvement, to be sure, but a tepid one; Hong Kong’s government has noted that year-on-year growth slowed compared to the same period covering 2012 and 2013. And there’s no questioning that certain individual businesspeople and businesses, particularly in once heavily occupied shopping areas like Mong Kok, have experienced genuine hardship, despite obviously bearing no personal responsibility for Beijing’s posture toward electoral reform. Nonetheless, the aggregate data is encouraging given admonitions like that of Hong Kong Secretary for Commerce and Economic Development Gregory So, who said on Oct. 4. that Hong Kong’s “reputation and competitiveness would be at risk” should protests persist.

More tourists have arrived in Hong Kong during the protests than did at the same time last year: 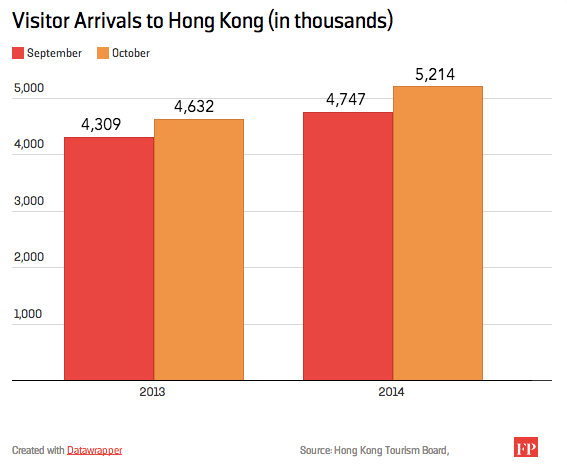 As the protests erupted close to China’s national holiday week, many fretted about its possible impact on tourism. “It is believed that some visitors will postpone or even cancel their plans to visit Hong Kong for the time being,” a representative for the Hong Kong Tourism Board told the BBC on Oct. 1. Fears were especially high that mainland tourists, a huge and growing group, were likely to be turned off by protests that disrupted their frequent shopping excursions and appeared to some to be anti-Beijing. But those anxieties did not come to pass. Comparing October of 2013 and 2014, granular data shows that the number of mainland visitors grew a whopping 18.3 percent, and by 12.6 percent when accounting for all visitors.

Politically, Hong Kong indeed looks divided, with citizen anger at police growing and enmity toward political leaders strong. But that’s been true for some time. 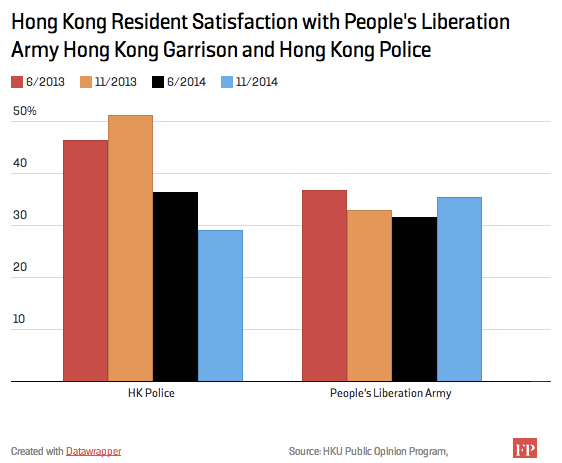 Seven years ago, it would have been hard to imagine that the police force in Hong Kong — which as recently as 2007 enjoyed satisfaction ratings as high as 80 percent — would be less liked than the People’s Liberation Army, whose support rating has never surpassed 70 percent since a PLA garrison moved into Hong Kong following the city’s handover to China in 1997. But Hong Kong’s current police commissioner, Andy Tsang, appointed in January 2011, is widely unpopular and carries a reputation for inculcating strong-arm tactics, particularly after he allegedly told a reporter in March 2011 that it was a “fantasy” to expect an apology after officers had pepper-sprayed a minor at a protest scene.

Accusations of brutality during the demonstrations have hastened the police’s slide from favor and reinforced a sense that the city’s law enforcement, once lauded for their gentle touch with crowd control, are bullying the public instead of protecting it. Condemned as “black cops,” Chinese slang for police gone bad, officers were often caught on camera beating, kicking, and chasing bloodied pro-democracy demonstrators down the streets with batons and riot shields at hand, including in an Oct. 15 video that showed several police holding down and flogging an unarmed protester. (Seven of the officers involved were later arrested.) 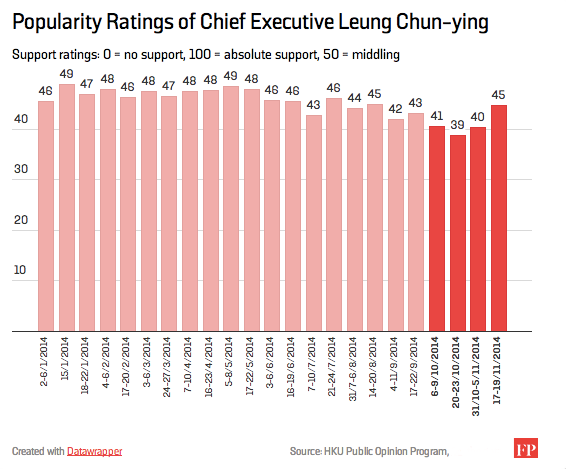 Leung’s handling of the protests has been widely panned, and his popularity dropped sharply as protests intensified. The head of Hong Kong’s government angered many when he refused to meet with demonstrators to discuss electoral reform (instead deploying his number two, Carrie Lam), and his reputation suffered a further hit when Australia-based Fairfax Media reported that Leung had decided not to disclose a series of payments from a former company of his, totaling $6 million, that he has received while in elected office. But Leung’s chief offense in the eyes of many Hong Kongers is, and has been, his perceived coziness with Beijing, which has saddled him since he first took office following an election in which he eked out a victory while fending off suspicions that he was a closeted member of the Chinese Communist Party.

…although Leung has been historically unpopular for some time. 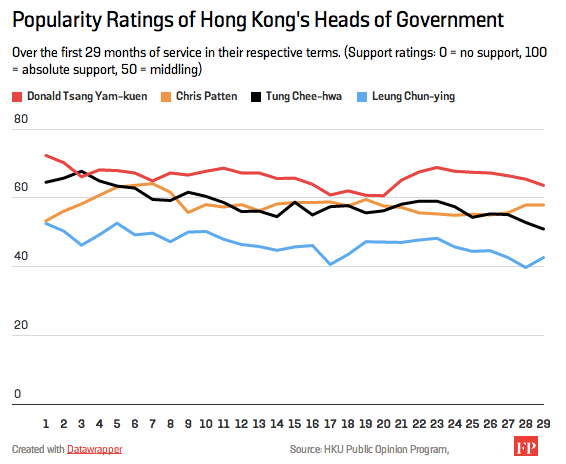 Leung’s popularity rating at the outset of his term was just 51.5, on a scale of 0 to 100 — slightly lower than ratings for Chris Patten, Hong Kong’s final colonial governor under British rule. It’s fallen since, although a small recent uptick may reflect relief that protest encampments are starting to dwindle. But Leung’s comportment during the protests only reinforced perceptions that he is tight with Beijing, and a major surge in the chief executive’s popularity among Hong Kong’s divided polity looks unlikely.

It’s obvious that Hong Kong has suffered political upheaval and economic headwinds in recent months, with real human costs. Reports of political polarization and a “deterioration” in the business environment are not without basis. But neither the street-level chaos nor the economic winter that some darkly heralded has come to pass. Hong Kong, it turns out, is a resilient city.

When Social Justice Activism Becomes an Act of Self-Destruction

Tensions Escalate Between Turkey and Syria