In a dusty Jordanian border town, the "wives of martyrs" struggle to care for their families and rebuild their lives.

RAMTHA, Jordan — It was a rare happy occasion for Salma and her neighbors, Syrian war widows struggling to make lives in exile in this dusty border town.

Salma, 36, had arranged for her daughter, 17-year-old Amal, to marry a good man from her home village in Syria’s southern province of Daraa. For the first time since fleeing their country and crossing into neighboring Jordan, the women had a chance to celebrate.

They are just a few of the more than 3 million people who have fled Syria to escape the violence that has consumed their country. In Jordan, which is home to more than 600,000 refugees, Syrians try to keep a low profile to avoid attracting unwanted attention from the authorities, who may question their immigration status. Therefore, the wedding was supposed to be a quiet affair.

“We broke all the rules and sang, yet we did it in low voices,” Salma, a mother of six, said.

The wedding was a brief moment of levity in a life that has come to be defined by a vicious cycle of poverty, isolation, and pain. Two years ago, Salma’s husband, a rebel fighter, was killed by a sniper in the western part of Daraa province. In the blink of an eye, Salma became a widow — part of a group known locally as the “wives of martyrs.”

In Egypt, Lebanon, Iraq, and Jordan, there are more than 145,000 families headed by single women, according to a U.N. report published in July 2014. They have paid a higher price than many: One-third of the women said they do not have enough to eat, while many depend on dwindling stipends from the UNHCR (the United Nations’ refugee agency), Islamic charities, Gulf donors, churches, and the World Food Program’s monthly food vouchers to survive.

Salma refused to watch the video of her husband’s last moments, which rebel fighters often share over the Internet to announce the death of their men. She still clings to a false hope that he might return one day.

“If he shows up, I will share him with you,” she told the three other widows, all wives of martyrs who now live together in a building paid by a Gulf donor.

The burdens of violence are present in their scant belongings, heavy mementos to remind themselves of those they lost in the war. Digital-era lockets: cherished cell-phone images of dead fathers, husbands, and brothers lost to Syria’s bloody uprising. Salma still keeps her husband’s new red top and white track pants — he told her that he would wear them when he saw her in Jordan. 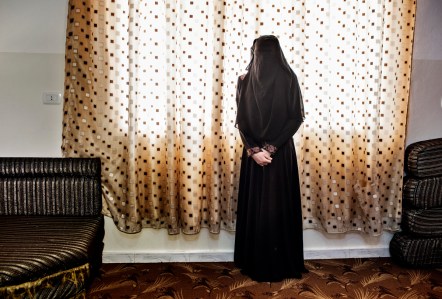 PHOTOS: Images of the Women Made Widows by Syria’s Civil War

Her marriage, she recalled, was a happy one, though he slapped her on her face on their wedding night, based on his mother’s orders, to assert his authority. That night, Salma fainted out of fear and anxiety — she was only 15, and he was 18. Yet, she said she loved him. She confided to her neighbors how she misses the intimacy and sleeping next to him.

Although they shared a house with his mother, he would sneak into the house and make love to Salma, but then pretended to be mean to her when his mother was around. “We would finish” she laughed, “and he would scorn me in front of his mother.”

One day he decided to surprise her. “He woke me up at midnight to eat chicken he himself cooked and got me Pepsi,” she said, her green eyes wide open. “I couldn’t stop laughing because he forgot to clean the chicken.”

Despite ordering her son to slap his wife, the mother-in-law, who is now in her 80s and with her health failing her, speaks highly of Salma. “God keep her,” she said. “She bathes me and scrubs my feet.”

Yet she still had advice for her granddaughters: “Treat your husband like a king.”

Salma is currently fixated on finding a husband for her 19-year-old daughter, Hala, who divorced her abusive husband in Daraa after a marriage that lasted just 25 days. As a divorcée, the social pressures on Hala are immense. She is yearning for freedom — but she hardly leaves their apartment, as doing so would lead people to perceive her as morally loose.

“Do not expect me to get married like my sister. I want someone to fall in love with,” Hala had insisted at the start of summer. By the end of summer, however, she was considering a proposal from a Saudi whom she had yet to meet in person, tired of spending her days “counting ants” in the same apartment day in and day out.

The discussions among Salma and her neighbors are not only about marriages — they are about how to make ends meet. The wives of the martyrs have never had jobs before. Some have taken courses in sewing, and other widows have taken courses in beauty, computer skills, and handicrafts offered by the Jordanian Women’s Union. But they are not allowed to work in their host country.

The women know they cannot take assistance for granted. The aid is drying up. On Dec. 1, the World Food Program announced it would have to cut back on food assistance due to funding shortfalls; it was only able to resume the program due to a flood of private donations. This past August, the Islamic charity that paid for the widows’ apartments informed them that the donor had not confirmed whether he will continue paying the rent. A last-minute payment has saved them from being thrown in the street, but the anxiety remains. “It was a nightmare,” said Umm Ibrahim, 32, Salma’s neighbor.

With five girls and three boys between ages 4 and 16, Umm Ibrahim regrets having too many kids. Her husband received a fatal bullet in the back on Aug. 15, 2012, while he was distributing bread to citizens in Daraa. Seven months after his death, their home was demolished by barrel bombs.

“My husband used to love kids, but I didn’t like to have too many,” she said. “He was angry when I had an IUD inserted because I did it behind his back. I told him I will have it removed once the regime is toppled, but he died a few months later.”

Strings are attached to the rent money that the widows received. They have to abide by the rules dictated by the Islamic charity, which are hung in the staircase. The list details how a covered woman should behave: They are not allowed to pluck their eyebrows, chew gum, speak loudly on the phone, or wear high heels. They are also not allowed to leave or have visitors two hours after evening prayers.

Umm Mohammad, Salma’s neighbor, has already received two warnings from a sheikh in his mid-20s because she exceeded the curfew by 10 minutes. “I told him I wanted to buy food and the shop was crowded because it was just a few days before Eid.… I really felt like slapping him,” she said.

In another part of town, Aysha, a widow and mother of three, took action. The rules were too much for her, so she just left the building.

“I felt suffocated,” she said. “A sheikh told me not to expect that I come and go as I wish — then he flirts with me on WhatsApp,” she said. “He told me I have a beautiful body.”

Aysha now lives in a one-room apartment with a toilet. She does not even have the money to pay her rent of roughly $160 per month. But her freedom is worth it, she said.