U.S. Ambassador to Israel Gets an Early Hanukkah Gift: an Iron Dome Menorah

A pretty spot-on metaphor for the American-Israeli relationship: U.S. Ambassador to Israel Dan Shapiro holding a menorah in the shape of the Iron Dome missile system.

Here you have it, a pretty spot-on metaphor for the American-Israeli relationship: U.S. Ambassador to Israel Dan Shapiro holding a menorah in the shape of the Iron Dome missile system. A State Department official emails to say that the menorah was presented to the ambassador at a staff holiday party. It was made with “an empty box of coffee capsules, an old VHS cassette, paper clips, and heavy-duty tape,” among other materials. By the looks of it, a lapel pin does double duty as a flag. 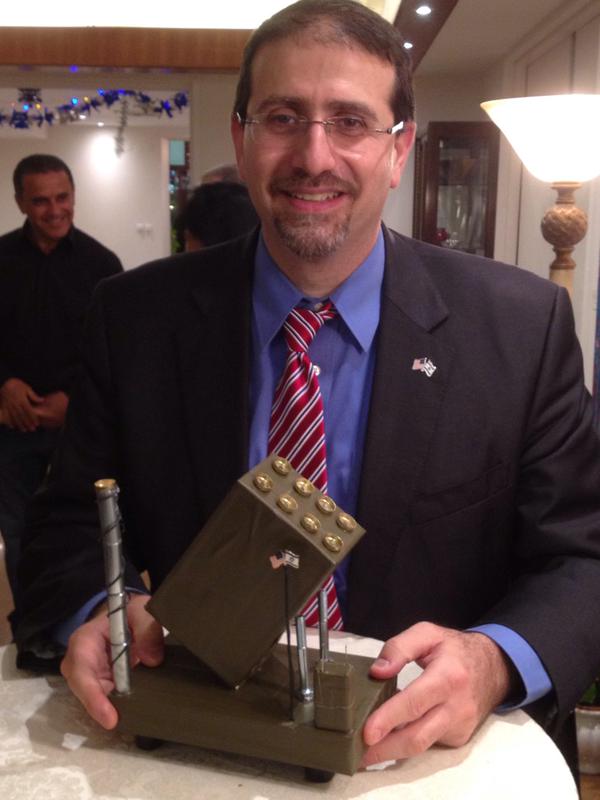 It’s no secret that in recent months the relationship between Israel and the United States has, in many respects, fallen on hard times. The Israeli-Palestinian peace talks brokered by Secretary of State John Kerry have gone up in smoke, and the government of Prime Minister Benjamin Netanyahu regards U.S. efforts to broker a deal with regard to Iran’s nuclear program with deep suspicion.

However, as ties between the White House and and Israel have grown increasingly strained, military cooperation between American and Israeli forces has entered something of a golden period. The Iron Dome missile defense system, an Israeli design developed with U.S. funding, is the most visible emblem of that relationship. The system saw heavy use during recent fighting in the Gaza Strip and was credited with shooting down 90 percent of missiles fired toward Israeli population centers. Before adjourning for its winter recess, Congress allocated $175 million for the program for fiscal year 2015 and opened the door for providing Israel with $175 million if Jerusalem agrees to buy more of it from American firms.

So there you have it, a real symbol of the holiday spirit: missiles.