How to Make a Skyscraper Invisible

How did the city that gave the world the Eiffel Tower and the Louvre Pyramid become so afraid of bold construction?

Last month, Paris city councillors rejected a proposal, supported by Socialist Mayor Anne Hidalgo, to build the “Tour Triangle,” a 42-story, crystalline skyscraper in the 15th arrondissment designed by the celebrated Swiss architects responsible for London’s Tate Modern and Beijing’s “Bird’s Nest” stadium. The proposal, in other words, would have built a mid-level skyscraper in a quiet southwestern corner of the city. In other metropolises, municipal governments make these sorts of decisions regularly. But this is Paris.

Outside of the La Defense financial zone, just west of the city proper, Paris has not added a modern skyscraper to its skyline in 40 years. In all corners of Parisian media, the Tour Triangle vote was treated like a national disaster. For the tower’s advocates, the vote was an opportunity to spur real estate development at a time when France is in the economic doldrums. For its opponents, the very existence of the proposal represented a neoliberal model that threatens the French way of life: Skyscrapers, for many Parisians, are what Anglo-Saxon capitalists build. They’re simply alien. But arguably, for the city as a whole, the rejection represented a failure to do what Paris has traditionally done brilliantly: build monuments.

The Tour Triangle would have been massive: 900,000 square feet of offices, retail and restaurants, a Manhattan-scale complex. And it would have been a spectacular sight. Located at the Parc des Expositions, just inside the Périphérique highway, it would be by far the tallest structure in the southwestern part of Paris. The location matters: While there’s a commercial logic in locating a tower in a zone with an exhibition centre, the neighborhood as a whole is low-rise. Buildings stand 100 feet at most, and the streetscape is that of 19th-century Paris. Even the Triangle’s greatest defenders would admit that at 590 feet it was wildly out of scale: only the Eiffel Tower, the Grande Arche de La Défense, and a handful of the city’s other icons compare.

In terms of form, the skyscraper would be like nothing else, too. A huge glass triangle, its proportions disconcertingly resemble a wedge of La vache qui rit cheese, but it is certainly original. In the architects’ computer-generated renderings, it luxuriates in sunny scenes filled with attractive young people and greenery. It looks fantastic, as such renderings always do — a seductive landscape of efficiency and good living. 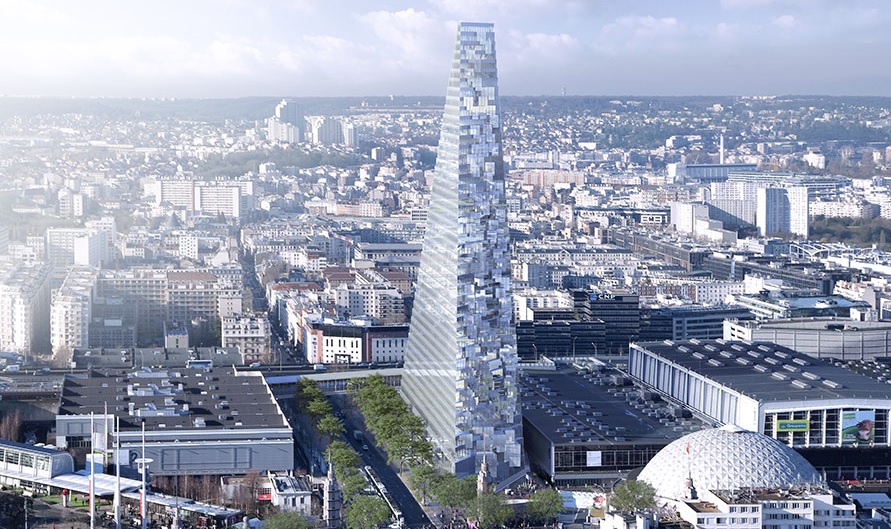 The Triangle, as depicted in architects renderings. Source:tourtriangle.com

Of course, the reality is more complex. At the same time the Triangle’s architects were trying to persuade Parisians of their vision’s beauty, they were also trying to convince them that they’d hardly notice this new hulking presence in their midst. One can see this strategy at work on the tower’s website, which spends a great deal of effort trying to make the building disappear. You won’t notice it, the developers say soothingly, because it’s made of glass. It’s really about access, they say, pointing to the nearly 60,000 square feet of new public space the complex adds. It won’t cause unwelcome shadows, they note, because of its tapering form. Almost everything the architects say has one message: This building is invisible. Even in the renderings, the Triangle dissolves against the grey Parisian sky. As if to reinforce this strange duality, the renderings omit Paris’s one true existing skyscraper: the wildly unpopular Tour Montparnasse, built in 1973.

Parisians don’t for the most part like towers, and they certainly didn’t want a repeat of Montparnasse, a blank international-style slab that overpowers its surroundings. Part of the opposition was populist. A lavish project in a time of austerity, it was for many people simply off-key. And the gentrification it might facilitate would be as much threat as opportunity to the ordinary residents of the 15th arrondissement. One of the councillors who voted against the project was Danielle Simonnet of the anti-statist, anti-capitalist Parti de Gauche, who called the Triangle “simultaneously megalomanical, anti-social and anti-ecological.”

But there were aesthetic questions, too. The center-left newspaper Le Monde, normally a friend of the ruling socialists, spoke for many when it argued in an editorial that the tower “makes no sense” in its proposed location. “There’s nothing sadder than a tower all alone,” the paper said, using the word célibataire, which in French means “celibate” as well as “alone.”

Not long ago, the political establishment would have embraced such a bold project. During the 1980s, the French were the world masters of architectural boldness. The presidency of Socialist François Mitterrand (1981-1995) was defined by a series of epic Grands Projets (Grand Projects) that reinforced Paris’s reputation as the world’s cultural capital. The Louvre pyramid (I. M. Pei, 1989) and the Grand Arche de La Defense (Johan Otto von Spreckelsen, 1990) showed immense confidence. These were bold interventions in the historic city, architecturally dramatic, and global in orientation.

Perhaps its no coincidence that Paris could point to other highly impressive material manifestations of French success at the time, too, such as a network of TGV trains, the fastest in the world in their day, and Minitel, a text-based communications system that prefigured the Internet (though in fairness, Minitel only worked in Paris). It was a time of ambition and self-belief.

Fast-forward to 2014 and things are different in the City of Lights. France’s economy has still yet to fully recover from the 2008 financial crisis. Its president, François Hollande, is embattled and weak — the least popular head of state in history of the Republic. Whatever the reality — the majority of Parisians still live well — the mood in the media and the country at large is unmistakably one of crisis.

It’s not just that France is different from what it was in the early 1990s. The way cities present themselves is, too. France’s Grands Projets were part of a wider urban culture based on the conservation of the existing buildings, with judicious (but spectacular) contemporary interventions. That model sought continuity with the past in terms of form (the Grande Arche de La Defense is built on the continuation of the Champs Elysees axis, for example). And it sought continuity with the institutions and habits of the past, too. The attention to public space was as much about making Parisians disciplined and respectful citizens as it was about attracting tourists.

All this was much admired outside of France. Paris in the 1980s was a city that still seemed to have confidence in culture, and public life, and it built as if it believed in these things. Anglo-Saxon nations at the time seemed to have turned away from values like culture entirely.

But 30 years later, it’s not so clear the French model works. It depends on a secure attachment to big things: the nation-state, the corporation, culture with a capital “C.” In many parts of the world, these have started to unravel. These days, some of the loudest voices are anti-statist, entrepreneurial, and individualistic. The cities they inhabit — say East Berlin or Brooklyn — are messy and heterogeneous, and often rather ugly. They don’t look a lot like Paris.

Paris’s eternal rival, London, has been much more adept at representing the contemporary economy in its buildings. Pop-ups are everywhere, celebrating the provisional quality of the new culture. And the new skyline of the city has something of the same quality: provisional but spectacular, an expression of a culture that is focused on the immediate present. The results have often been aesthetically challenging, to put it mildly. Beyond the famous Shard and Gherkin is Rafael Viñoly’s so-called Walkie-Talkie building. A stumpy tower, just completed, the Walkie-Talkie bulges at the top, looming over the observer. Its geometry is (putting it politely) alarming. But even critics of these buildings would admit they provide a sense of possibility. If these sometimes brutally ugly structures can spring up, then so too can anything else.

Paris’s urban landscape has a sense of order and a human scale that represent for many an ideal of beauty. It is also a discouraging landscape for youngsters. The same qualities that attract tourists tell Paris’s young people that the past is more important than the future. Many French youth have decamped to London as a result, a city where, according to the think-tank New London Architecture nearly 250 skyscrapers have been either approved, or are under construction. With up to 400,000 French people in residence, London is now France’s sixth-largest city.

These sort of unsettling statistics drive business support for the Triangle. Speaking to Le Monde before the vote, Jean-Louis Missika, the deputy mayor of Paris, described his fears. Should the tower be denied approval: it would be simply a “disaster for the Parisian economy.” He meant not only the jobs to be created by the tower, but its symbolic value for the economy. The Triangle was to send a message: Paris is open for business.

But then maybe the objectors have a point. Many of the project’s biggest critics seem to share an unease about the turbocharged capitalism London has embraced so adeptly, and which has so thoroughly demonstrated its capacity to produce exciting urban landscapes. The 15th arrondissement is a quiet and homely part of the city — “the quartier des profs, a place that even teachers can afford,” said Andrew Hussey, a professor of French at the University of London and a well-known Paris-based cultural commentator. “The skyscraper city project just does not fit here in any sense.” What Paris loses in vibrancy, it makes up for in remaining an attractive, and in some parts, still relatively humane city, accessible to even the less well-off. Today, you can still buy a two-room apartment in the 15th for a little over 100,000 euros ($124,000). Not cheap, but certainly affordable for public sector workers.

So what now? Mayor Hidalgo, the Tour’s most public supporter, has declared the Nov. 17 vote rejecting the building invalid on a technicality. Another vote is likely, although the outcome remains uncertain. What the debacle shows, however, is that two mutually exclusive cities are fighting for their existence on the banks of the Seine. One has the tower, the jobs, and the hungry-for-business attitude of London or Shanghai, but has arguably lost something of its identity in the process. The other has no tower, fewer jobs, and is probably poorer, and slower. But it is indisputably Paris.

Richard J. Williams has been writing about cities for over 20 years His latest book is Why Cities Look the Way They Do, published by Polity. He is Professor of Contemporary Visual Cultures at the University of Edinburgh, and currently Head of History of Art.