The IDF just tweeted out a really strange Hanukkah photo of a soldier carrying a drone with one hand and lighting a menorah with the other.

Nothing says holiday spirit quite like a member of the Israel Defense Forces balancing a drone in one hand and lighting menorah candles with the other, right? 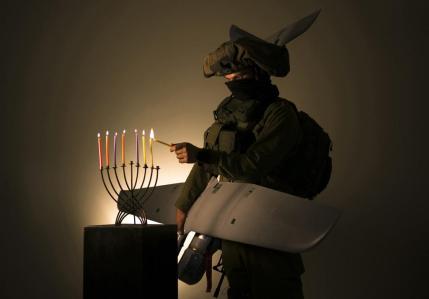 The caption reads: “He operates drones during the day, and lights #Hanukkah candles at night. #HappyHanukkah from the IDF!”

The awkwardly posed photo, where the soldier is wearing a mask and backpack as though he just returned from a combat zone, was a controversial choice considering Israel is the largest exporter of drones in the world and has used them to kill more suspected terrorists than any country other than the United States.

The tweet went viral almost immediately, where users slammed it for being in poor taste.

Still, it isn’t the first time Israeli armaments have become an an odd part of Hanukkah, a holiday known for jelly donuts, potato pancakes, and eight days of gifts: Earlier this month, the American embassy in Israel tweeted out a picture of Ambassador Dan Shapiro posing with a menorah modeled on Israel’s Iron Dome missile defense system.