The administration is ending America’s longest war just as the Taliban reconquer much of Afghanistan and continue their push towards Kabul.

A day after the U.S.-led International Security Assistance Force held a low-key ceremony in a heavily guarded military compound to mark the formal end of its combat mission in Afghanistan, Taliban insurgents on Monday mockingly accused the United States and its NATO allies of leaving the country in defeat after a long and costly 13-year military campaign.

“Today ISAF rolled up its flag in an atmosphere of failure and disappointment without having achieved anything substantial or tangible,” Taliban spokesman Zabihullah Mujahid in a statement Monday, using the acronym for the American-led coalition. “We consider this step a clear indication of their defeat and disappointment.”

In the lengthy statement, Mujahid said the war had exacted a heavy toll from the United States and its allies while leaving them precious little to show for their human and financial losses.

“America, its invading allies, ISAF, NATO along with all international arrogant organizations have been handed a clear cut defeat in this lopsided war,” the spokesman said. “Tens of thousands of soldiers were killed and wounded, billions of dollars wasted, their nations were exhausted, their countries faced economic turmoil and even recession, their generals failed one after the other and they lost their stature and prestige internationally.”

The Taliban’s media wing, which consists of both official and unofficial spokesmen, is no stranger to prodding and trolling ISAF publicly. For the Taliban and its supporters, publicly ridiculing ISAF has been part of a carefully crafted campaign to discredit the mission and portray it as a failure. Pro-Taliban Twitter accounts have garnered a reputation for disputing ISAF’s claims about military gains, often sparking heated exchanges between the two on social media. 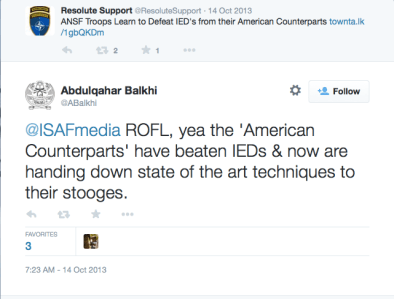 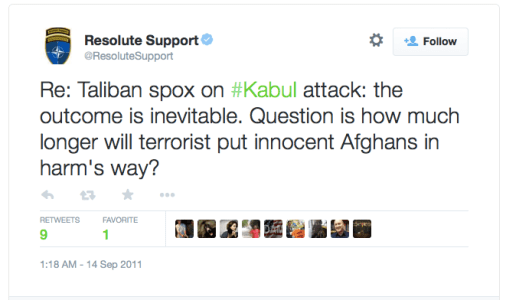 Sunday’s ceremony on a basketball court at the heavily-guarded NATO headquarters complex in Kabul marked the official end of combat operations in Afghanistan, but about 13,000 foreign troops, including 9,800 from the United States, will remain in the country under a new two-year mission named Resolute Support, which begins January 1, 2015. President Ashraf Ghani, who took office in September, signed bilateral security agreements with Washington and NATO allowing for an ongoing Western military presence in Afghanistan.

Ghani clearly needs the help. The Taliban have mounted an unprecedented number of high-profile attacks inside the heavily guarded Afghan capital of Kabul, including a high-profile insider attack that killed an American General killed in August. The armed group has also been steadily reclaiming control of large portions of Helmand and Kandahar, a pair of southern provinces and longtime insurgent strongholds that the United States and its allies had cleared at great human cost just a few years earlier.

ISAF’s new mandate will be predominantly a supporting mission designed to train Afghan security forces to fight insurgents, who have killed a record number of Afghans in 2014. There have already been 9,617 civilian casualties in Afghanistan this year — 3,188 deaths and 6,429 injuries — according to the United Nations. Those are the highest numbers recorded by the agency since it began tracking Afghan deaths in 2008. The United Nations estimates that at least 75 percent of the deaths and injuries are caused by Taliban attacks, which also killed 55 U.S. soldiers in 2014.

In the latest spat of insurgent violence, two teenage boys were killed on Saturday in eastern Wardak province, when a rocket was fired near a children’s volleyball match in Nirkh district. Another five children, aged between 11 and 14 years old, were wounded by shrapnel. Kabul blamed the Taliban for both attacks.

The armed group, for its part, says it won’t lay down its weapons until all Western forces leave Afghanistan.

“Our courageous nation shall continue its Jihad and struggle so long as a single foreigner remains in Afghanistan in a military uniform,” it said in the statement.