It’s Official: The Man Who Ruled China Has All But Vanished

He used to be among the most powerful men in the world, ruling for the better part of a decade over a country with more than 1 billion citizens, sitting on well over $3 trillion in foreign exchange reserves, and commanding a military over 2 million strong. But starting in late 2012, in the virtual blink of an eye, he was gone, mentioned so seldom in Chinese public discourse that it’s as if he barely ever existed.

As former Chinese president Hu Jintao’s friends and allies continue to drop like flies (and tigers) in China’s ongoing anti-corruption campaign, the erstwhile president himself (pictured above at far left) is nowhere to be seen. To be fair, retired politicians in any country are seldom as newsworthy once they leave office. But in China’s state-run media apparatus, the amount of coverage that former officials receive says more about a leader’s current stature within the Chinese Communist Party than it does about reader demand. That’s why Hu’s near-disappearance from state media since he stepped down in November 2012 is so important. It not only shows his genuine inability to seize the reins of power; it also highlights the rapid ascent of current president Xi Jinping, who has thus far received an amount of coverage not afforded a top Chinese leader since Mao Zedong.

Foreign Policy analyzed coverage of current and previous leaders in party mouthpiece People’s Daily in the years surrounding the last two major leadership transitions, covering every article run in the Daily from 2002 to 2006 and from 2012 through the end of 2014. The results show mentions of Hu dropping precipitously as soon as he relinquished his party position in mid-November 2012: 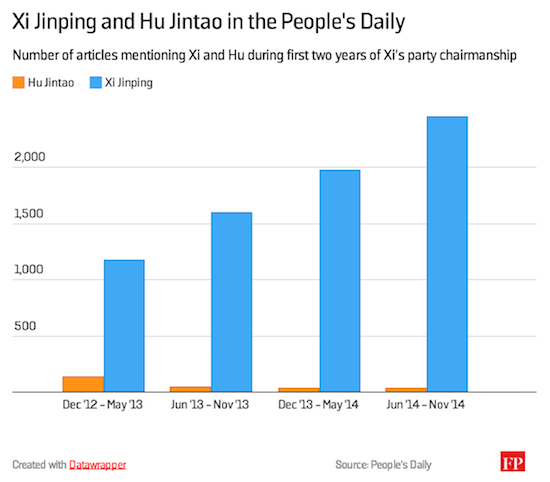 Between December 2011 and November 2012, his last year as party secretary, Hu appeared in 2,266 articles. In the very first year after he handed power to Xi, Hu appeared in only 188 articles. By Hu’s second year out of office, this figure was down to 77. In all of December 2014, Hu’s name appeared only five times in the paper. Given that the number of total articles in the Daily has been relatively constant over time, Hu’s sharp drop in coverage is telling.

Recent history shows such a stark falloff not to be a foregone conclusion. Hu assumed the party’s top post in December 2002 from his predecessor Jiang Zemin, but it took a full six months before Hu was being mentioned more frequently than Jiang: 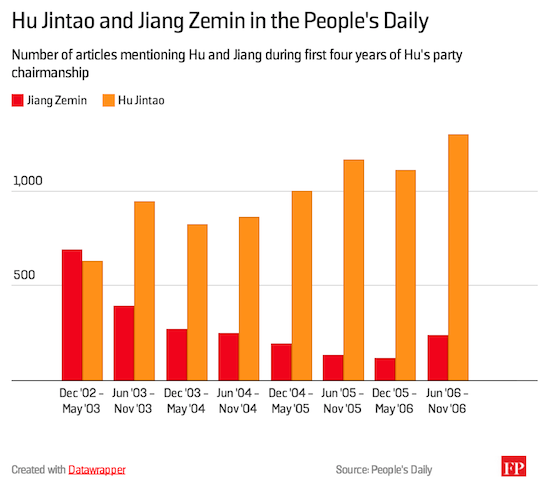 These data are likely unsurprising to seasoned China watchers. Jiang, who even today continues to play an outsize role in Chinese politics, made great efforts to hold on to power in 2002, notably retaining the chairmanship of China’s powerful Central Military Commission for nearly two years after ceding leadership of the party to Hu. During Hu’s second year in office, Jiang’s name still appeared in the Daily 512 times. Even four years after handing off party control to Hu, Jiang remained a regular fixture in state media, appearing in nearly an article a day in 2006, far more often than Hu does now after only two years out of office.

It’s possible that after the protracted handover from Jiang to Hu, which led to unusually open criticism from within China’s military ranks and was perhaps symptomatic of increasingly comprised civilian control of the armed forces, the party was eager to avoid a repeat. But Hu’s vanishing act may also be due, at least in part, to his successor’s remarkably rapid consolidation of political power, a feat that has impressed even U.S. President Barack Obama. In Xi’s first year in power, he appeared in 2,771 Daily pieces. In his second year, he was featured in 4,432 pieces. In November 2014 alone, he appeared in 418 of the paper’s stories, roughly double the rate of coverage Hu had enjoyed before he stepped down.

Xi’s grip on power is already so firm and his presence in state media so ubiquitous that some Western analysts have raised concerns, valid or not, that a cult of personality is developing around him. It’s certain that Xi’s populist, strongman image is unlike that of any recent Chinese paramount leader. While his more recent predecessors were content to rule by consensus, anonymous and uncelebrated, Xi’s own words and actions suggest he sees himself more as a helmsman in the mold of former Communist Party strongman Mao Zedong or reformer Deng Xiaoping – popular, charismatic, and able to translate his ideas into action. To this end, Xi has not only sought to bolster his own status as purveyor of what he calls the “Chinese dream” but has also gone to great lengths to eliminate any challenges to his authority, including former state security czar Zhou Yongkang and Central Military Commission vice chairman Xu Caihou, in addition to Hu’s allies.

To be sure, the opaque inner workings of Chinese elite politics makes it impossible for outsiders to know the specific reasons Hu has kept such a low profile since leaving office. And mentions in the Daily are just one possible yardstick for measuring political power in China. Yet in a system in which politics and media are inextricably linked, it’s impossible not to wonder: where is Hu Jintao?