Do Chinese Care About ‘American Decline’? In 2014, They Did Only Twice

Exceptions prove the rule that China is more interested in its own rise than anything else.

For Americans, the term “American decline” may conjure up any number of bleak scenarios, from economic stagnation to the creeping corrosion of a liberal international order, or simply a vague, intangible dread. When confronted with this notion, it’s hard not to imagine everyday Chinese chortling at their geopolitical rival’s weakness or ineptitude while Communist apparatchiks in Beijing leadership compounds give each other gleeful high-fives.

The data from China’s vast Internet supports a more nuanced picture. Perhaps unsurprisingly, for many Chinese, the rise of their own country is more interesting than what transpires 7,000 miles away. According to searches on Weibo, China’s huge Twitter-like microblogging platform, in 2014 “American decline” was mentioned 255,688 times on Weibo, while mentions of “Chinese rise” nearly doubled that, with 478,384 mentions in the same period. Analysis of those two terms in 2014 by a search trends index tool powered by Qihoo 360, a Chinese Internet security company, yields similar results.

But two major events triggered exceptions in that trend, propelling mentions of “American decline” above those of “Chinese rise” over a sustained period. The first was Russian President Vladimir Putin’s annexation of Crimea; the second, the World Bank’s projection in April that the size of China’s economy would soon surpass that of the United States (which it did in October). Both of these events seemed to indicate to many in China that the United States might be toppling from its long-held position of global dominance.

Here are Qihoo statistics from Feb. 1 to March 31. (Some readers may note that one axis in the charts below is unlabeled. Qihoo doesn’t reveal its formula for quantifying popularity, but says on its website that the data represents the weighted average of key term search frequency.) 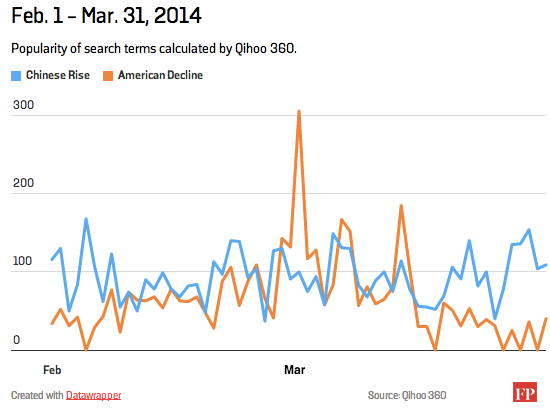 Following Putin’s move in late February to annex the Crimean peninsula from Ukraine, China’s government reacted with cautious support for Russia, whose actions in Crimea and Ukraine blatantly violate China’s own enshrined foreign-policy ideal of zhuquan, or “territorial sovereignty.” But it was the U.S. response, which failed to prevent the annexation or stem further unrest in Ukraine, that “fed a perception that the United States is weak,” wrote Sen. John McCain in a March 14 op-ed in the New York Times.

The senator was correct, at least when it came to Chinese commentators and netizens, who saw U.S. failure to resolve the crisis as further evidence of the decline of an American-led world order. “The [Ukraine] crisis shows that America, as a superpower, is losing its influence and strength, and the Crimea crisis has advanced its decline,” said He Liangliang, a commentator for Hong Kong-based Phoenix Television in a March 21 interview. On Tiexue, a (often fervently) nationalist online discussion forum for Chinese military enthusiasts, one user wrote on March 2 about “the fall of U.S. hegemony,” citing Russia’s annexation of Crimea among the evidence. The user concluded that “China today is much stronger than in 2001” and Chinese should do their part to “expedite the death of a slumping America.”

Qihoo statistics from April 1 to June 30 look like this: 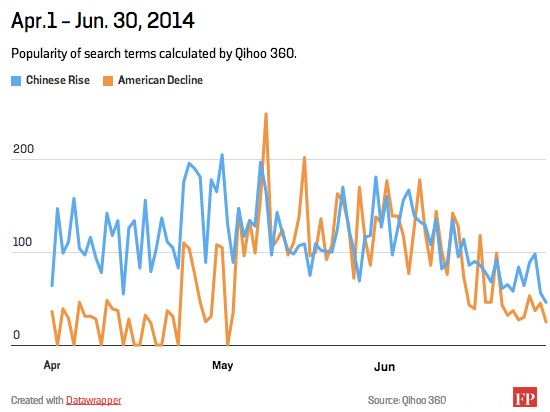 On April 29, the World Bank released a report predicting that the Chinese economy would soon surpass the U.S. economy based on purchasing power parity, unleashing a torrent of online debate in China about what the prediction really meant for the future of the world’s two largest economies.

It was Chinese grassroots web users, and not state media, driving the uptick in U.S.-related Internet searches. Far from trumpeting the news, Chinese authorities and state media sought at first to downplay it, and in some cases even to quash it, perhaps out of concern that a world-beating economy would carry with it greater expectations for Chinese contributions to global institutions such as the United Nations — or that Chinese citizens might begin to wonder why such a huge economy hadn’t translated into more improvements in their daily lives. China’s National Bureau of Statistics refused to publish the World Bank data, expressing concerns about its methodology. State media outlets at first avoided running the report, though official outlets began to chime in on May 4 when state news agency Xinhua emphasized that China was “still a developing country” with a per capita GDP ranking a lowly 82nd in the world. A May 6 editorial in the state-run Global Times deemed the report “murder by flattery,” which will “affect people’s understanding of [China’s] real strength, while giving excuses to others to drive up the [Chinese currency] RMB’s exchange rate through market speculation.”

But on May 11, popular blogger Qiu Lin penned a widely shared post asserting that China would be unable to benefit from a quick U.S. decline, given that neither China nor the European Union nor Russia would in the short term be able to replace America’s role in the international economic and political order. Rather, Qiu continued, it would better suit China’s interest for the United States to suffer a “slow and ‘relative’ decline.” A May 6 Financial Times article arguing that “America’s decline is not related to China’s rise,” summarized in Chinese media outlets, was widely shared online, though the idea that China was actually a richer place than the United States again rankled commenters. One commenter on Weibo asked, “Rising, and being the world’s number one — what idiot put an equal sign between these two?”

Chinese officials and netizens seem to agree that China has not yet replaced the United States as the world’s true number one. During a Dec. 22 conversation with U.S. Commerce Secretary Penny Pritzker in Chicago, Chinese Vice Premier Wang Yang said, “China and the United States are global economic partners, but it is the Unites States that is leading the world.” And Chinese netizens readily pointed out that even with the largest economy, China’s per capita GDP still lags far behind that of developed nations, in their minds rendering a GDP-based ranking nearly meaningless. “In China, the money that it takes to buy one house could buy several houses overseas, but our salaries aren’t one-fifth of theirs,” one web user wrote in response to a May 2 article about the World Bank findings. “Is it worth being proud of this kind of sham GDP?”

Comments like these reveal where the bulk of Chinese attention truly lies. Chinese policymakers no doubt believe that certain U.S. missteps present them with opportunities to advance their own interests. But President Xi Jinping’s vision for his country, the “Chinese dream,” refers less to China’s position relative to the United States and more to the ability to improve Chinese citizens’ lot when compared to earlier years. In the end, like everyone else in the world, the Chinese are most interested in themselves.

Charts by Shujie Leng/Foreign Policy. Do not reproduce without permission.