Beijing has made its peace with a gentler pace of economic expansion. But not this gentle.

China’s economy must become more innovative, its leaders insist. But the same is not true of its economic slogans, it seems. If anything, they are becoming more derivative. Over the last few months, China’s officials have referred relentlessly to the “new normal,” an economic catchphrase that is as fresh as the air in Hebei.

The term was popularized back in 2009 by Mohamed El-Erian, the former CEO of Pimco (and who once had a regular column in Foreign Policy called “The New New Normal”). He used it to describe the world’s feeble recovery from the global financial crisis, which, he feared, would inflict lasting economic damage, even after calm returned to the financial markets. Crisis-hit countries would struggle to restore growth to its pre-crisis rate, he warned (let alone restoring GDP to its pre-crisis trajectory).

El-Erian was more optimistic about the big emerging economies. The only one to repay that confidence fully was China. Thanks to a (much-maligned) stimulus effort, its economy grew by over 9 percent in 2009, according to the country’s National Bureau of Statistics (NBS), and by double digits the following year. The financial shock in September 2008 made a mockery of most pre-crisis predictions. But China’s economy managed to live up to people’s prelapsarian hopes. Its 2013 GDP turned out to be bigger than the International Monetary Fund had predicted it would be in its pre-crisis April 2008 forecast. No member of the G7 can say the same.

Having escaped El-Erian’s new normal, why are China’s leaders now embracing the term? In their distinctive usage, it describes a different kind of slowdown. China’s underlying rate of growth is easing not because of a financial disaster, but because of three deeper trends. Its population is aging (the cohort that will turn 16 over the next five years is 15 percent smaller than the cohort that will turn 60, according to the census), its economy is maturing (services, which are 20 percent more labor-intensive than industry, now account for a bigger share of its GDP, according to the NBS) and the aspirations of its citizenry are broadening, encompassing safer food and cleaner air, as well as higher incomes.

Besides, China cannot fight this declining growth potential in the way it battled the crisis, economists point out. No amount of stimulus will increase the working-age population or return the low-hanging fruit of development to the bough. That was the mistake South Korea made in 1989, according to Barry Eichengreen, Dwight Perkins, and Kwanho Shin in their book From Miracle to Maturity. Policymakers in Seoul were faced with a secular slowdown, which they misinterpreted as a cyclical dip. Their efforts to keep growth unsustainably high only made things worse, culminating in a crisis and crunching recession eight years later.

That was a macroeconomic blunder. It is, however, possible to make the opposite mistake. It is possible to misinterpret cyclical weakness as structural decline. Slowing growth, after all, can have many causes. It can reflect inadequate demand as well as flagging supply, fading animal spirits as well as diminishing productive powers. The economic engine can suffer from a lack of gas, as well as a lack of capacity.

How do economists usually tell the difference between these two types of slowdowns? By looking at prices. If growth ebbs but inflation does not, the slowdown is probably structural — what China’s leaders would call a new normal. If, on the other hand, growth ebbs and inflation does the same, the slowdown could represent something else: a cyclical lack of demand. Downward price pressure is a sign that spending is too weak to keep the economy operating at full capacity.

China’s slowdown is a mixture of both, it seems to me. Its growth is falling short of its natural, warranted rate, which is itself slowing. This weakness is increasingly evident in its inflation figures: consumer-price inflation has remained below the government’s target for almost three years, according to the NBS, which also reports that producer prices fell by as much as 3.3 percent in December compared with a year earlier.

This downward pressure on prices is concentrated in certain parts of the country. The statistics bureaus in 19 of China’s 31 provinces and municipalities reported that their nominal growth (which includes inflation) was lower than their real growth (which does not) in the first three quarters of 2014, compared with a year earlier. That suggests prices are falling in these regions, even if they are still rising slowly across the nation as a whole. China cannot grow as fast as it did, but it can grow faster than it is.

This deflationary pressure is likely to persist in 2015. The chief economist of China’s central bank, Ma Jun, has forecast that the economy will grow by 7.1 percent this year. But, as he and his colleagues acknowledge, that will not be enough to reflate the economy. He foresees a further 0.4 percent fall in producer prices in 2015. A year ago, in his previous role at Deutsche Bank, Ma argued that China would have to grow as fast as 8.5 percent to stabilize producer-price inflation at a more reasonable range of 2 percent.

Critics of Beijing’s economic stewardship argue that this decline in producer prices is itself structural. It is, indeed, a delayed consequence of China’s stimulus efforts after the financial crisis. That investment spree made wasteful additions to capacity in property, coal, steel, aluminum, and other industries. China must now “digest” this excess capacity, as its leaders put it. Falling prices are the natural result. If China faces subnormal inflation now, it is only because it evaded El-Erian’s new normal back in 2009.

But this argument is not as compelling at it seems. It confuses a microeconomic problem (China’s poor mix of economic activity) with a macroeconomic one (an inadequate volume of activity). Some of China’s industries, such as steel and cement, are indeed plagued by overcapacity. Their prices need to fall relative to others, so as to attract more customers and deter further investment. But this realignment can happen through a combination of falling prices in the steel industry and rising prices elsewhere. There is no reason why prices in general need to decline. Deflation is not an aid to digestion.

The point is so often ignored it is worth spelling out. In the economics textbooks, a decline in steel prices, which puts downward pressure on inflation, would give the central bank room to ease monetary policy. This easy money would allow other parts of the economy to expand, buoying prices in those sectors even as steel prices fall. For China’s critics, stimulus is often characterized as a clumsy communist maneuver, dragooning the economy into a Soviet-style growth drive. But this kind of easing is really just textbook macroeconomic management.

Beijing, in my view, is right to embrace its “new normal” of slower trend growth. But falling prices suggest it is also facing something worse: a new subnormal of below-trend growth. That is worth resisting by stimulating demand (especially consumer spending). China’s growth rate must slow by as much as the arithmetic of population and productivity dictates. But by no more than that. 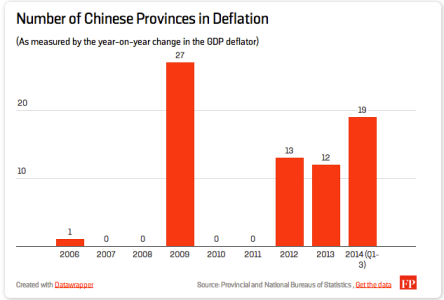 Disclaimer: This article does not represent investment advice or any kind of professional counsel, nor does it represent an offer to buy or sell securities or investment services. The opinions, which are subject to change, are those of the author not BNY Mellon Investment Management.