In the aftermath of the attacks in Paris on the offices of Charlie Hebdo and a kosher grocery store, French officials have launched a crackdown on the country’s jihadists, and that campaign seems to alternate between self-parody and deadly seriousness. On Wednesday, French police questioned an 8-year-old over his alleged support for the Charlie Hebdo ...

In the aftermath of the attacks in Paris on the offices of Charlie Hebdo and a kosher grocery store, French officials have launched a crackdown on the country’s jihadists, and that campaign seems to alternate between self-parody and deadly seriousness. On Wednesday, French police questioned an 8-year-old over his alleged support for the Charlie Hebdo gunmen.

On the same day, French authorities launched a glossy PR campaign to discourage the violent radicalization of its people. According to the government, more than 70 French citizens and residents have died in Syria and Iraq, and the campaign targets those the government considers especially vulnerable to jihadi recruitment: students who might fall for propaganda advertised on social media.

That campaign, centered around the website stop-djihadisme.gouv.fr, opens with a video that seeks to dispel what the French government sees as the myths sold by Islamist terror groups. With Frenchmen and other Europeans streaming to Syria to engage in that country’s civil war, the video depicts the Facebook activity of a hypothetical user interested in radical Islam and jihad. A recruiter then messages him and asks him whether he wishes to talk with fighters in Syria.

“Are you interested in what’s going on in Cham?” the recruiter writes, using a word used by the Islamic State to describe an area of Iraq and Syria. “If you have any questions don’t hesitate asking, the truth is over there, and now is the time to leave! If you have any other questions give me your number, I have friends over there who are fighting, I’ll put you guys in touch.”

Following the attempted recruitment, the video shifts into a kind of faux documentary style showing brief frames of what is meant to show two versions of life in Syria — the jihadi portrait of life in their self-proclaimed caliphate and what the French government considers the reality.

In response to the Paris terror attacks, the French government has unveiled a series of measures designed to strengthen the state’s counterterror efforts. They include increased personnel for the country’s security agencies, prison reform, and improved police equipment. France has also deployed significant numbers of security personnel to guard many of the country’s synagogues, kosher restaurants, and Jewish schools.

The website and video published Wednesday are part of that effort and geared toward detecting “individuals susceptible to turn toward radical violence and prevent them, if possible, from taking action.”

It is certainly well-intentioned, but the detection component of the platform is slightly comical. The chart below, published on the Stop Jihad website, presents ways to detect if a person is turning toward violent jihad. 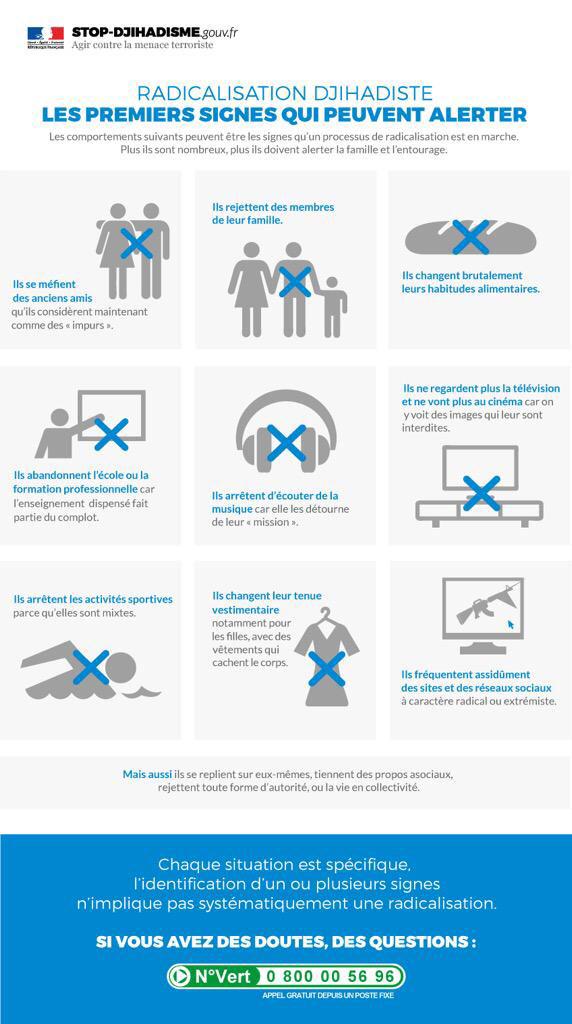 Among the criteria: changes in their diet (wonderfully illustrated with a banned baguette), no more trips to the movie theater, and, grande surprise, visits to jihadi websites.

Meanwhile the 8-year-old, who reportedly refused to participate in a minute of silence for victims of the Charlie Hebdo attack, was brought in with his father for questioning by the regional police.

He is not facing any charges.

The United States Needs to Declare War on Proxies

Uneasy Calm in Delhi After Days of Riots

The End of Volodymyr Zelensky’s Honeymoon