Far from home, a close-knit police battalion tried to keep the peace in one of the most strategically important towns in eastern Ukraine. 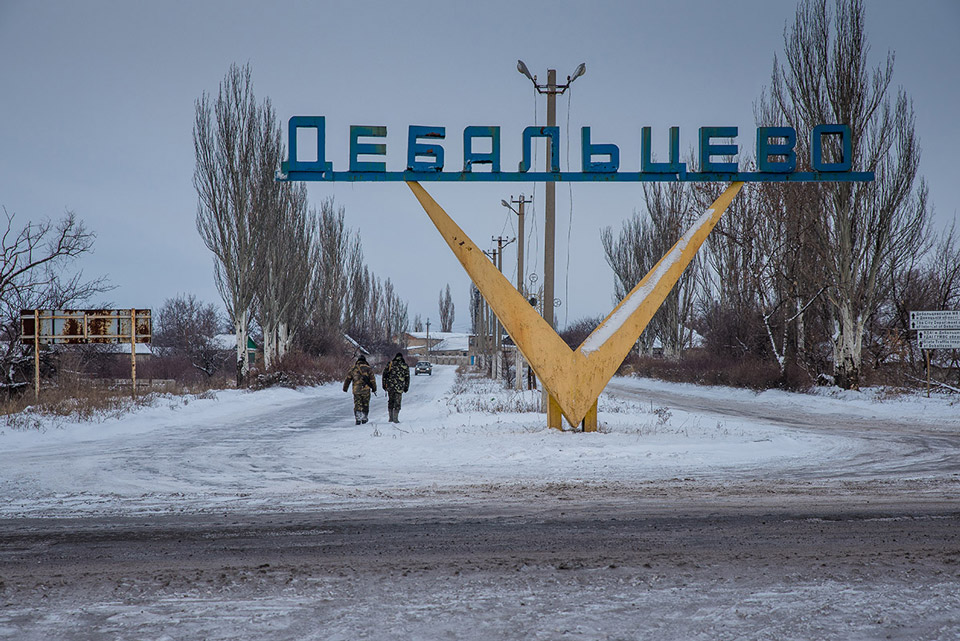 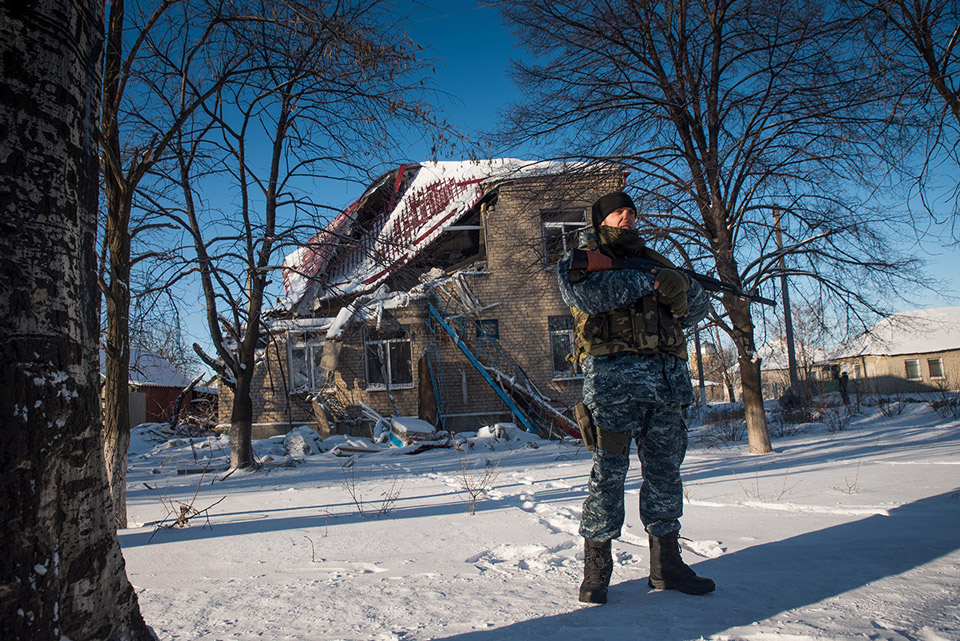 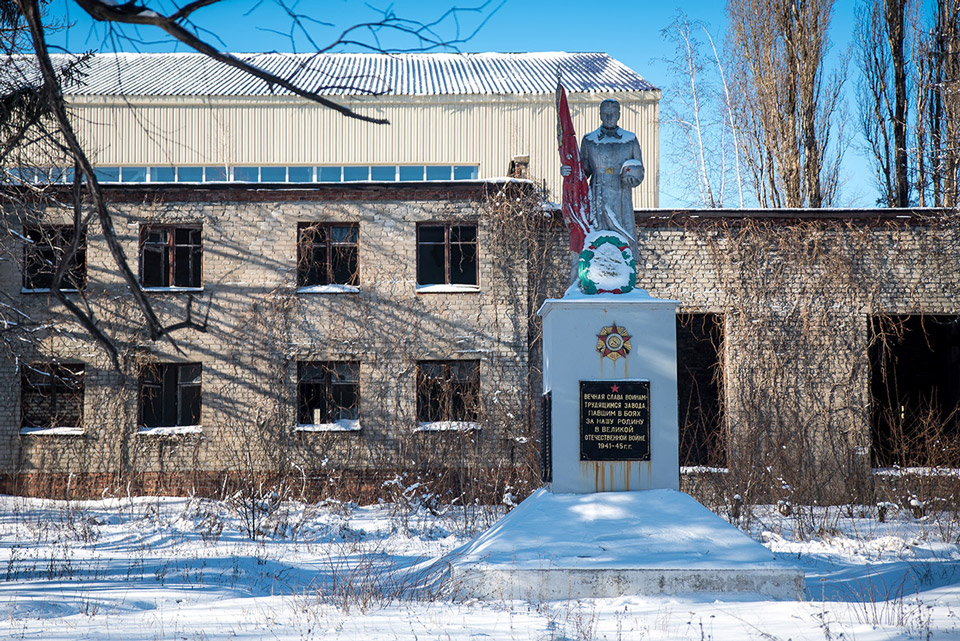 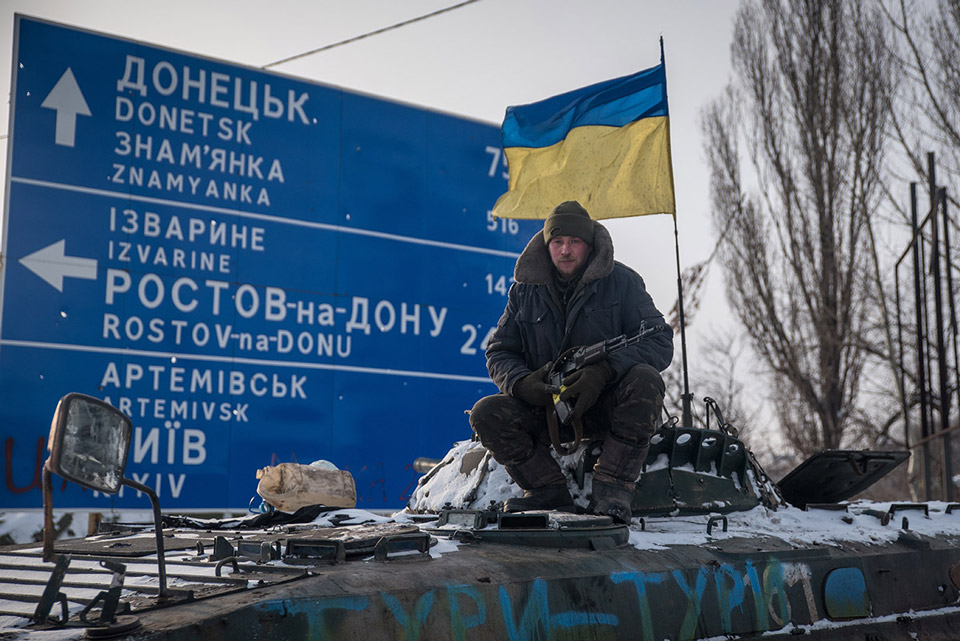 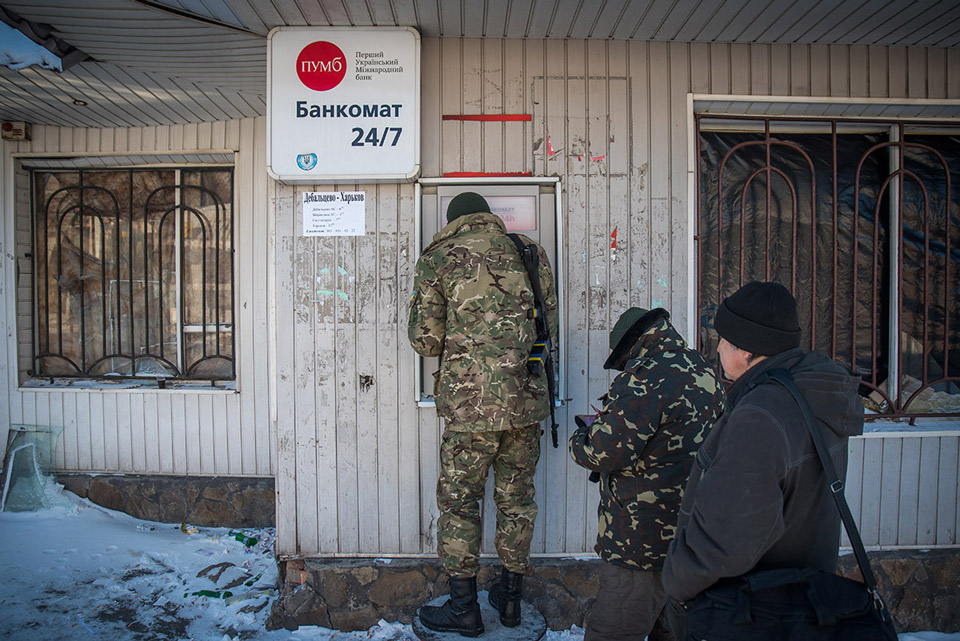 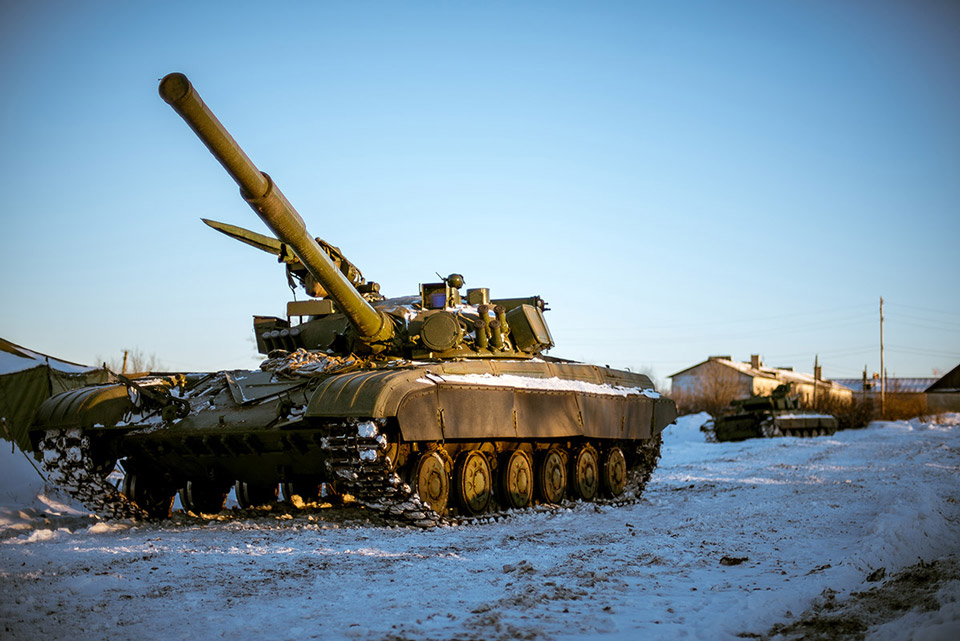 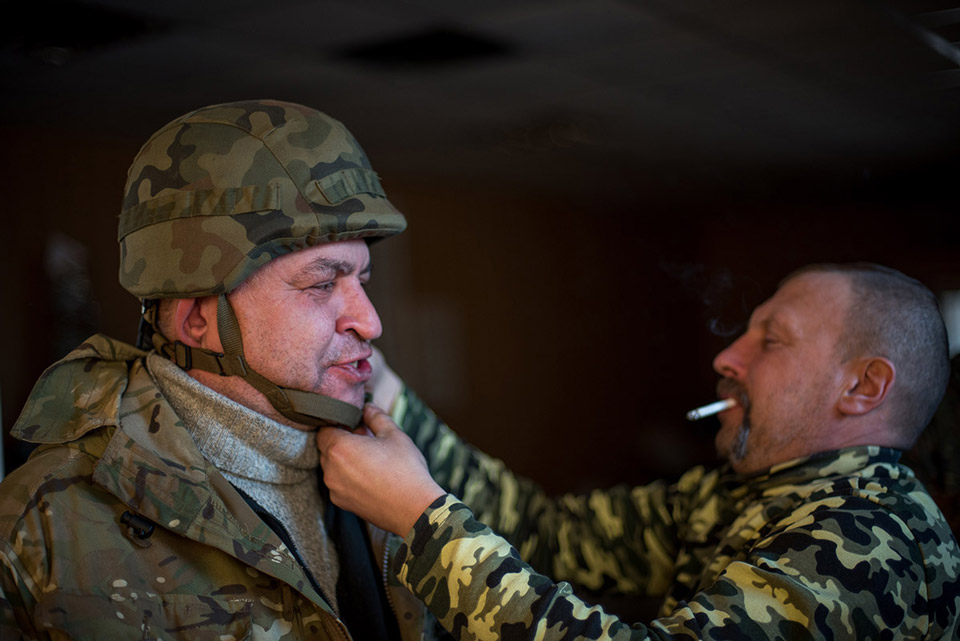 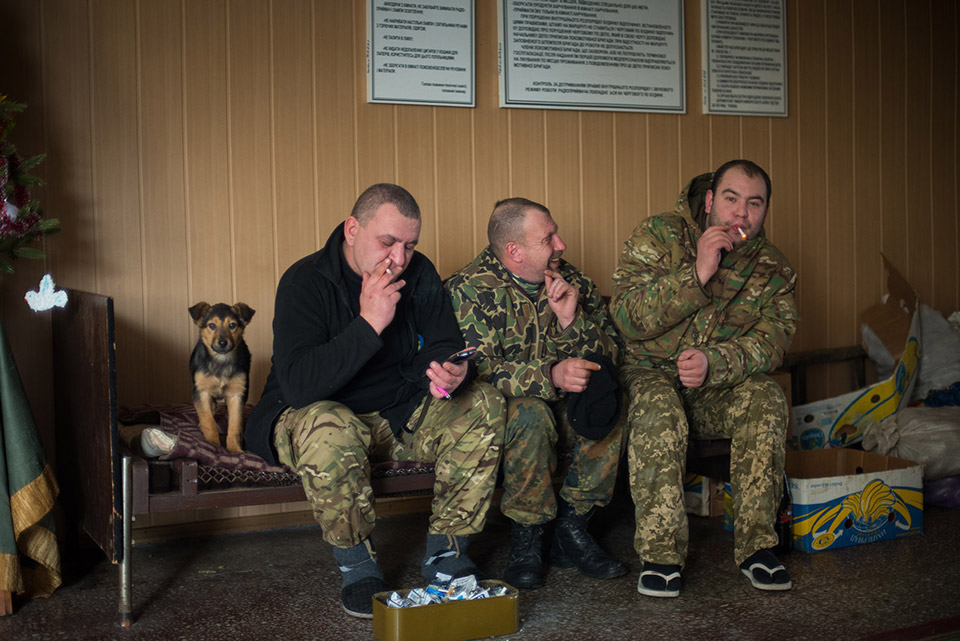 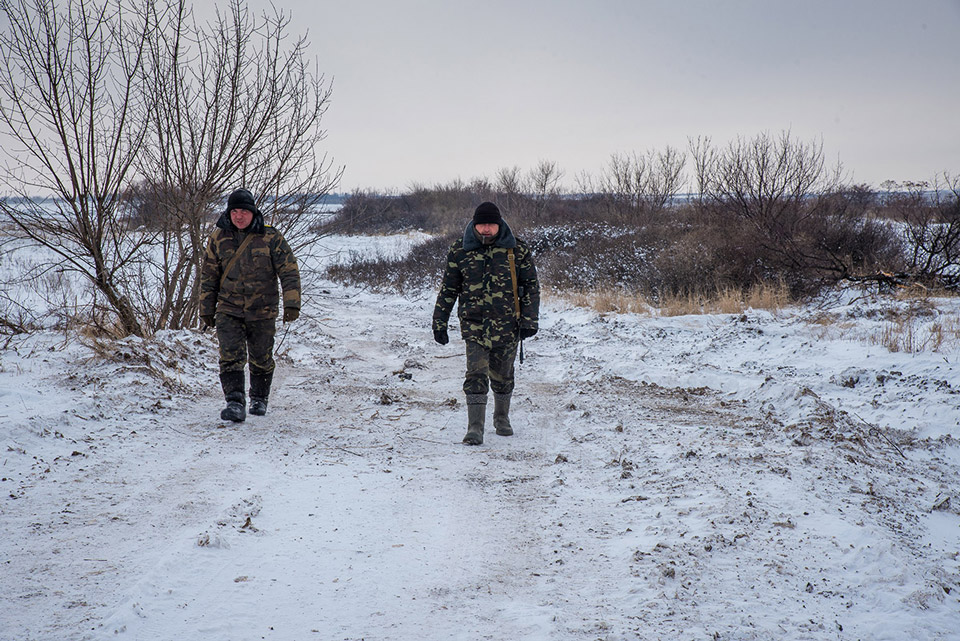 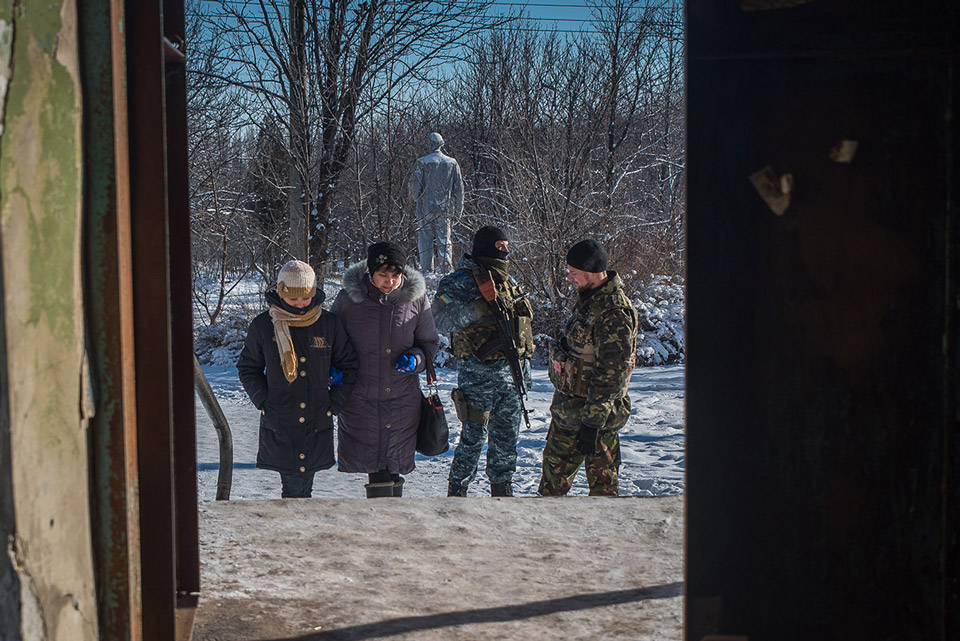 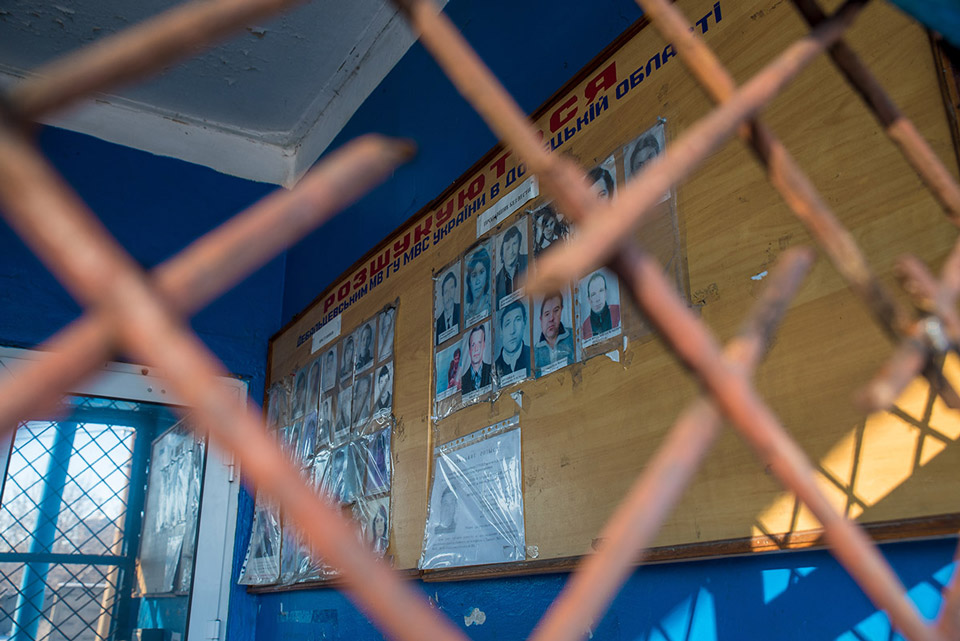 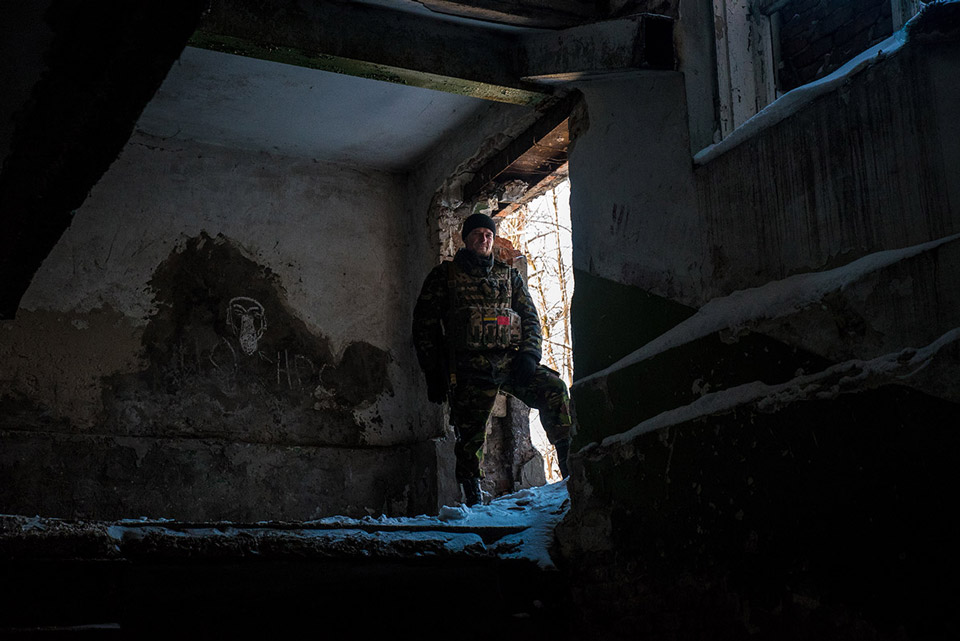 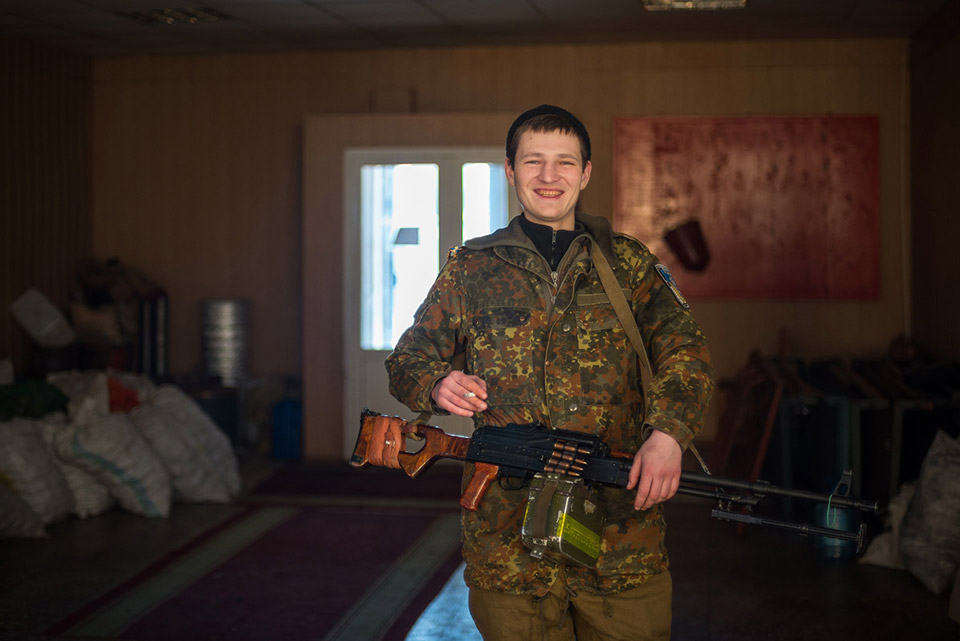 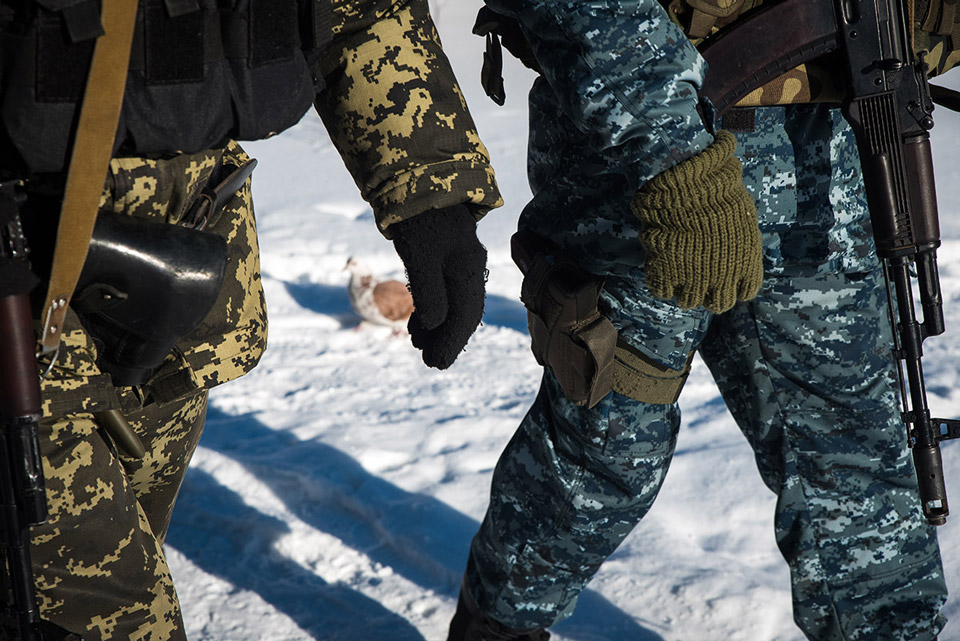 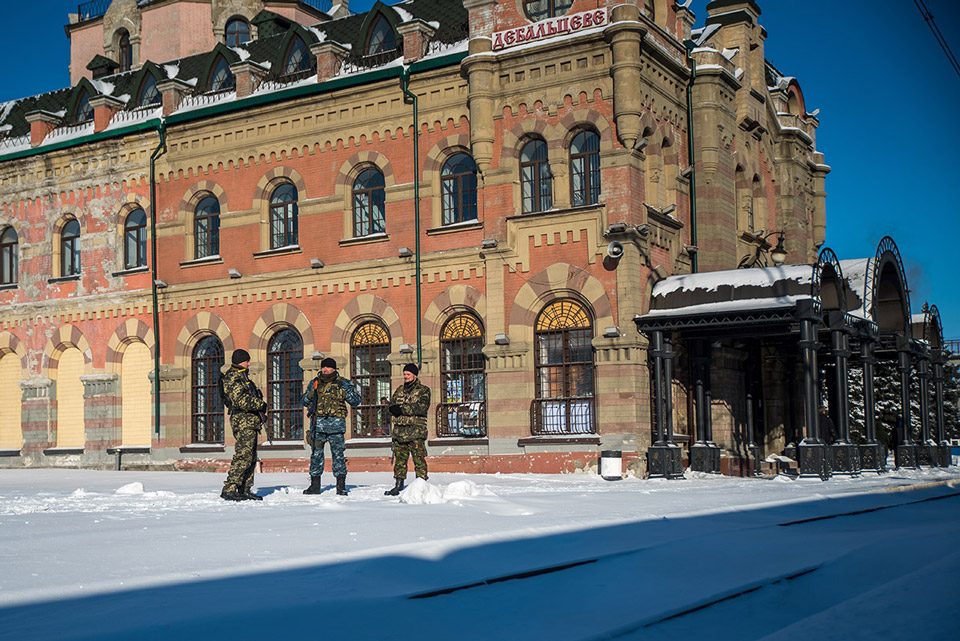 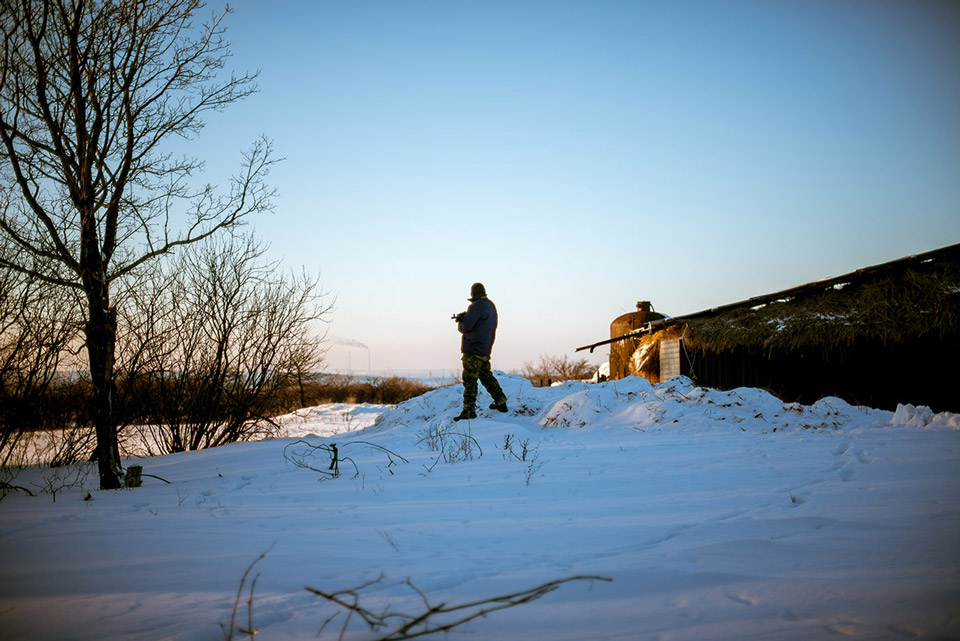 The Lviv Special Purpose Battalion commander, Zoreslav Kainskiy, in front of the local courthouse. The building partially collapsed after being hit by artillery. According to Kainskiy, the round was meant for the local police headquarters across the street.

A statue commemorating the fallen plant workers who died during the Great Patriotic War.

A Ukrainian soldier sits on an armored vehicle at the crossroads of highways M03 and M04 in Debaltseve.

Fighting men queue up at the only working ATM in town.

A Ukrainian T-64 tank overlooks the front-line positions in Debaltseve.

Roman Blavatskiy and Andriy Lemak smoke cigarettes and prepare for a daily patrol.

Men from the Lviv Special Purpose Battalion relax in the smoking lounge of the old railroad conductors’ lodge they now occupy.

Two Ukrainian fighters walk into town from their front-line position. Since the start of the new year, forces in Debaltseve have seen heavy bombardment from pro-Russian forces.

In the Debaltseve police headquarters, a series of posters of wanted and missing townspeople and wanted criminals in Debaltseve.

Yuriy Moskaliuk of the Lviv Special Purpose Battalion, in the ruins of the old House of Culture that was bombed during the summer.

An enthusiastic Andriy Velychko shows off his PKM machine gun.

Walking the beat and keeping the peace.

The Ukrainian military looks across no man's land.

A long 700 miles from home, a group of young men from western Ukraine found themselves garrisoned in an old railroad conductors’ boarding house in the town of Debaltseve, located in eastern Ukraine’s Donetsk Oblast. Tasked with maintaining martial law in this town that since January has been on the front lines of fighting, the members of the Lviv Special Purpose Battalion more resembled a crack military unit than a group of law enforcement officers. Photojournalist James Sprankle traveled to Debaltseve in January and spent several days with the battalion.

Situated in an area that is surrounded by the Luhansk People’s Republic to the east and the Donetsk People’s Republic to the west, the town is a vital transportation crossroad and therefore of great strategic importance. Not only is it at the intersection of two major highways; Debaltseve also served as an important rail hub for the Donetsk region’s ailing coal industry.

Though Debaltseve has so far been well defended by Ukrainian forces, it has recently become engulfed in a deadly burst of fighting that erupted between the Ukrainian military and pro-Russian separatists in mid-January. Civilians and military have been killed in the shelling which has devastated local buildings. CNN reported that the morgue is full, with some 200 bodies having been brought in so far this month alone. Two thousand of the town’s residents have been evacuated in the last few days, AP reports, as pro-Russian separatist forces continued to make their advances. Many of those who remain are living in bomb shelters and basements and are without electricity, running water, with food supplies running low.

The group of 39 of men pictured in these photos first arrived in October, prepared to take the place of the town’s disbanded police force. The military forces secure the outskirts of the town, but it is the men from Lviv who have been the ones to keep the peace with civilians. They go on patrols, investigate crimes, and are occasionally called upon to settle disputes between military personnel and civilians. When, for example, the military tried to commandeer a local man’s tractor for use on the front, the battalion members stepped in and negotiated an agreeable arrangement. And while there is no open animosity directed toward the men in the battalion, it’s clear they are not wanted here. The residents of Debaltseve want life to return to normal. They want peace.

In the first days of December, according to battalion commander Zoreslav Kainskiy, Debaltseve was hit hard with shelling by pro-Russian separatists and the battalion endured three days of Grad rocket and artillery fire. It was perhaps only the first taste of the onslaught that’s since ravaged the town, but the experience weighed heavily on the men. When they were not on duty they enjoyed hanging out in the sauna and drinking beer. Occasionally the stress of war and being away from home released itself in bursts of drunken squabbles. But even when they fight, the affection and loyalty between them is palpable. These men live together, eat together, and protect each other. And most importantly, they are neighbors.

The men are all from the area in and around the city of Lviv in western Ukraine. A city with bustling markets, world-famous cafés, and a European state of mind, Debaltseve exists to them as a Soviet anachronism. Battalion member Vitaliy Kalynets remarked, “Lviv has moved into the 21st century, but life in Debaltseve is stuck in the 1980s.” In what amounts to a foreign land, these men are isolated, relying solely on each other.

All photos by James Sprankle

Top secret classified information was among the documents recovered from the former president’s Florida resort.