Putin’s Next Prize in Eastern Ukraine

Look at the map: Mariupol is next to fall.

During the four-month-long “cease-fire” that followed the Sept. 5, 2014, Minsk agreement between Ukraine’s government and the Russia-backed separatist rebels, the shells never stopped falling on four key targets: Two of them — the Donetsk airport and the city of Debaltseve — have now been captured. Indeed, Russia’s second major offensive, which began in late January, appears to have reached a crescendo in the days after the signing of the latest Minsk deal on Feb. 12.

Despite the withdrawal of heavy artillery and a relative drop in violence (soldiers are still dying and artillery is still flying over Donetsk) in many areas of the front, Russian-backed forces are still working on the two other targets that remain in Kiev’s hands: The port city of Mariupol and the strategically important Bakhmutka highway, which runs west from the rebel stronghold of Luhansk. While there may well be a lull before the next major push, the pattern of attacks in recent weeks suggests no change in the Kremlin’s proxies’ intents since the first Minsk truce.

The most obvious target, and the one that has been the most fretted over since the end of August last year, is Mariupol, the industrial port city on the Azov coast. The city is of vital economic and strategic significance. And Russia has made clear that it wants the city. In a surprise move on Aug. 27, 2014, Russian forces took the town of Novoazovsk, east along the coast from Mariupol, and a short distance from the Russian border. Having opened a new front to take this economically and strategically unimportant town, it became clear that separatist forces were preparing for a move on Mariupol.

Why are the Russians so intent on taking Mariupol? Because if it were to fall, the task of forming a land bridge from Russia’s Rostov region to occupied Crimea would be significantly easier. There are no other equivalent population centers along the rest of the Azov coastline. In 2013, Mariupol made up between 31 and 33 percent of the Donetsk region’s total industrial output and, even more significantly, over 70 percent of the region’s steel production. It is also the only port in the whole Donetsk region. (Luhansk, the other region that Russia is trying to claim, is landlocked.)

The city is also of political significance to the wider conflict. As in Donetsk, Luhansk, Slavyansk, and Kramatorsk, separatist gunmen seized the city’s administrative buildings last spring. Mariupol was one of the venues for the May 11, 2014 “referendum” on seceding from Ukraine. It took not one, but two military interventions by the Ukrainian government to bring the city back under control by June 13 of last year. The city became the administrative center of the Donetsk region on that same date, standing in for separatist-held Donetsk. Were Mariupol to fall, it would be a huge blow to Ukrainian morale.

Villages to the east of the city, such as Sartana, Talakovka, and Gnutovo have been shelled almost daily since the September 2014 Minsk cease-fire came into effect. On Oct. 14, 2014, seven civilians were killed when a funeral procession was struck by shells fired by Russian-backed forces in Sartana, a small village northeast of Mariupol. Even more disastrously, rockets have fallen on residential areas of Mariupol itself, with 31 killed by a rocket on Jan. 24.

On Feb. 10, Ukrainian forces mounted an offensive to take back neighboring villages and push Russian artillery away from the city, claiming to have liberated the villages of Pavlopol, Kominternovo, and Shirokino. Russia-backed fighters counter-attacked, however, retaking Pavlopol and Kominternovo. The Ukrainians are now bogged down on the western outskirts of Shirokino, a resort on the coastal road out of Mariupol, taking a heavy pounding from artillery and infantry attacks. If the Ukrainian vanguard collapses at Shirokino, Mariupol will be exposed to an attack from the east. Shirokino lies less than 6 miles along the road from the edge of Mariupol. The other front-line village of Kominternovo is similarly close. 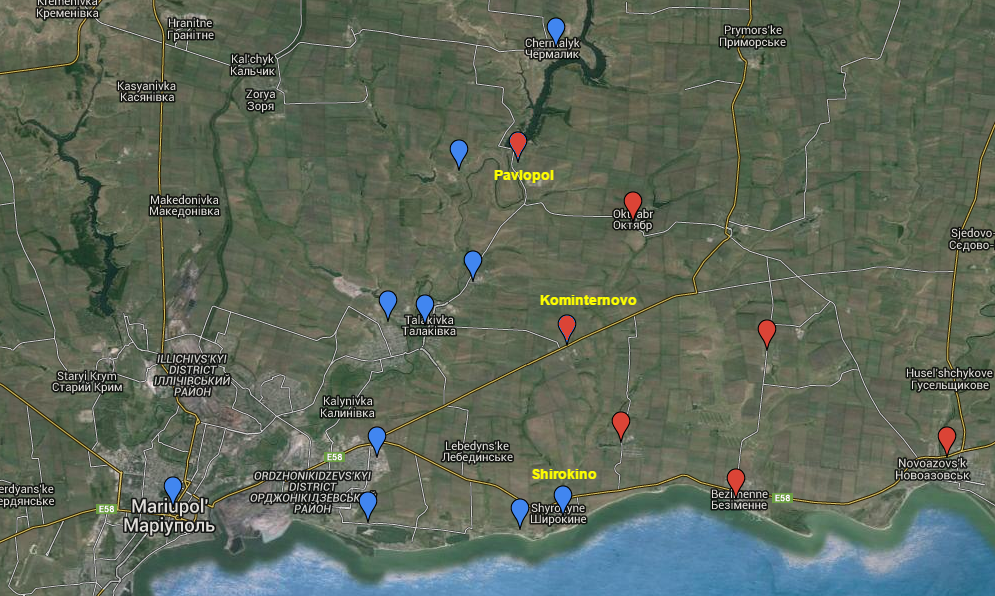 The Ukrainian military has had months to prepare for the anticipated assault. Unlike Debaltseve, which was similarly expected to be the target of Russian-backed forces for many months before it actually fell, Mariupol is well supplied with arms and fighters. Furthermore, it is not currently at risk of encirclement, with the sea to the south and secure territory to the west and the north. Enemy artillery fire has been concentrated on outlying villages rather than the city itself, leaving infrastructure intact and making it easier to hold out in the event of a siege.

Tactically, the northern supply route to the city is perhaps as important as closing in from the east. At the beginning of September, as Russian forces poured through the border into Novoazovsk, Russian or separatist fighters made a major push south from the center of the Donetsk region, through Starobeshevo and Telmanovo, capturing the highway between the separatist capital of Donetsk and Novoazovsk.

Meanwhile moves were made to capture the parallel highway south from Donetsk, which runs straight into Mariupol. After heavy combat and repeated claims and counter-claims of captured territory over the first few days of last September, a front line emerged: Ukrainian forces held the highway between Mariupol and Burgas, just north of Volnovakha (another place name now associated with high-casualty shelling) with Russian-backed forces controlling the route between Donetsk and Novotroitskoye.

The most effective attack on Mariupol would require Russian-backed forces to push Ukrainian troops off this highway, enabling a pincer attack from the east and the north on the city. Fighters and armor could easily be directed towards Volnovakha both from Donetsk in the north and from Russia itself, with columns crossing the border near the Russian village of Avilo-Uspenka and passing through Amvrosievka (where there are unconfirmed rumors of a Russian military headquarters), Starobeshevo, and Dokuchaevsk. 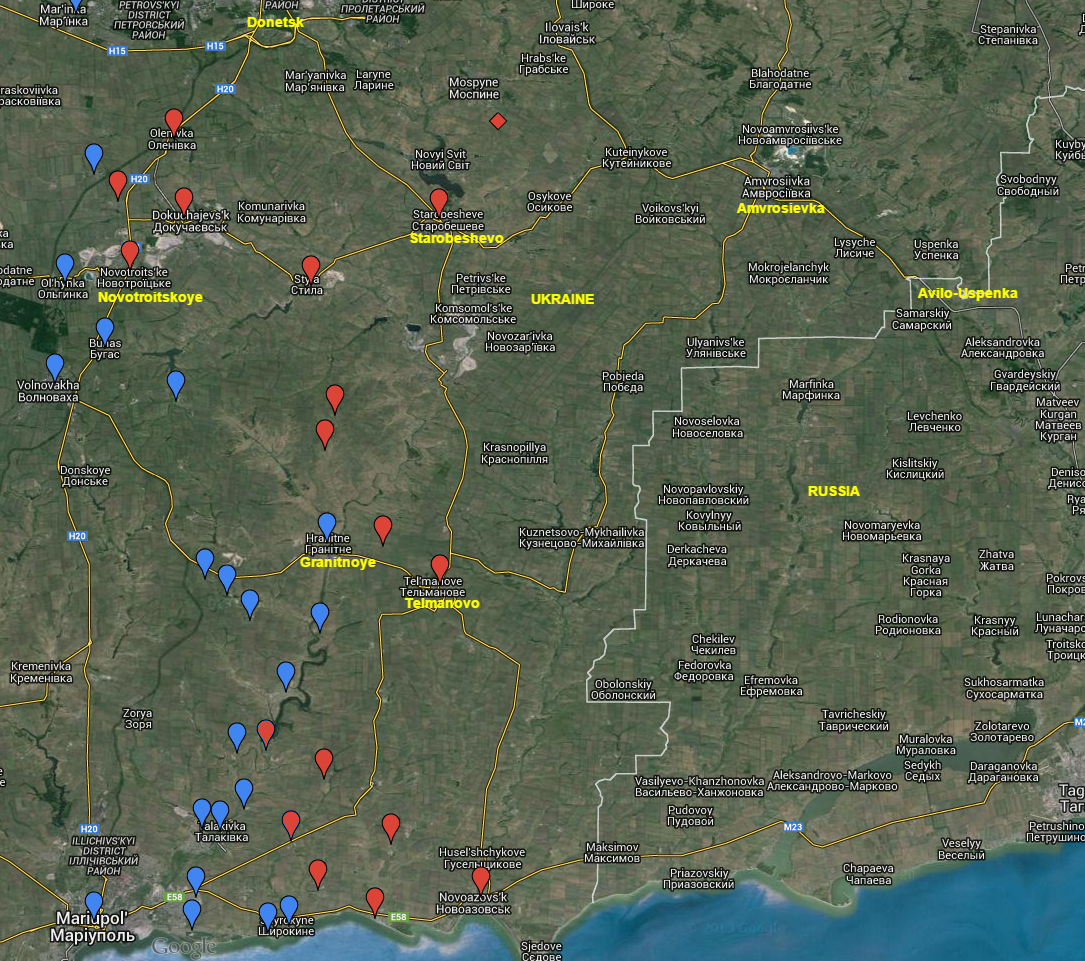 Any movement of Russian convoys on the border road through the Rostov towns of Matveyev Kurgan and Avilo-Uspenka should therefore be watched for carefully. While Mariupol is the more dramatic proposition, there is another target that has been the scene of even more intense combat over the last six months and is now in perhaps even greater peril: the area around the Bakhmutka highway in the Luhansk region.

The strip of land between Popasnaya in the west and Tryokhizbenka to the northeast will likely be the next target. The Bakhmutka highway runs between separatist-held Luhansk and the Ukrainian-held town of Zolotoye. To the north lies the Seversky Donets River. This area is the front line between the government-held land north of the Luhansk region and the separatist-held south. On the southern banks of the Seversky Donets, but north of Zolotoye, lies the industrial town of Lysychansk, home to a large (and now inactive) oil refinery. 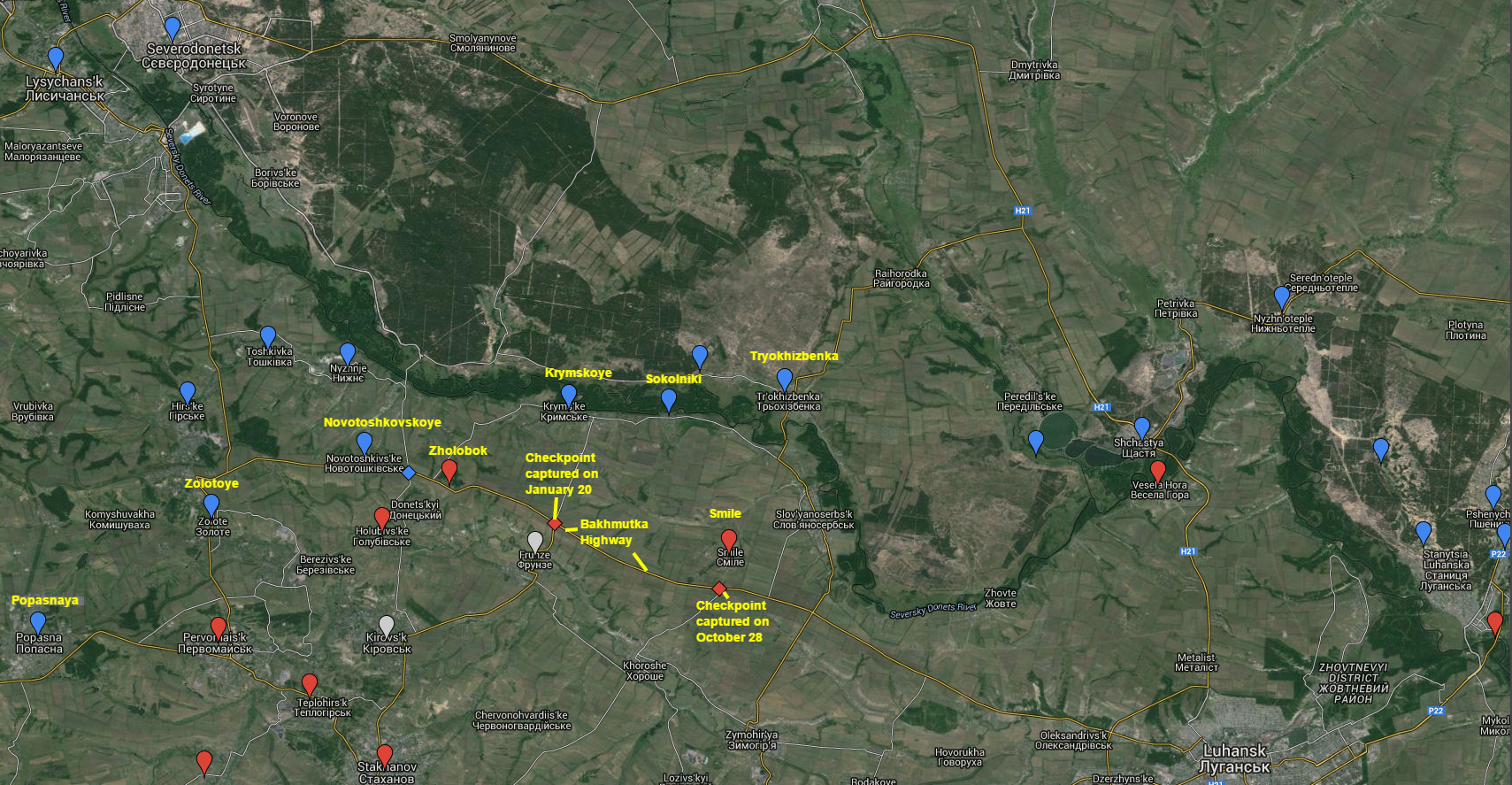 This area was, with the exception of Donetsk airport, the most volatile of the front lines during the period between last September’s Minsk deal and the January offensive on Debaltseve. Not only were towns along this swathe of land subjected to daily bombardment, but Russian-backed forces actually made advances, taking new territory. On Oct. 28, 2014, Ukrainian forces were evacuated from their most easterly checkpoint on the highway, near the town of Smile, after being pinned down and nearly surrounded for almost two weeks. On Jan. 20, Russian tanks overran the next checkpoint and the village of Zholobok.

The Ukrainian checkpoint at a junction east of Novotoshkovskoye, less than two miles west of Zholobok, is now the most strategically important point along the road. As a result, the villages of Krymskoye and Sokolniki, on the southern banks of the Seversky Donets and northeast of Zholobok, are now dangerously exposed.

Furthermore, the fall of Debaltseve has drastically eased Russian move on this area. Only a short drive north, pushing through the Ukrainian positions at Mironovsky and Troitskoye, will be required to make a move on Popasnaya. Pushing Ukrainian forces back across the Seversky Donets river would then seem a logical next step in this northern field of operation, establishing the basis for a concrete northern border to the Luhansk People’s Republic which would aid the long term “freezing” of the conflict — which appears to be the Kremlin’s goal. 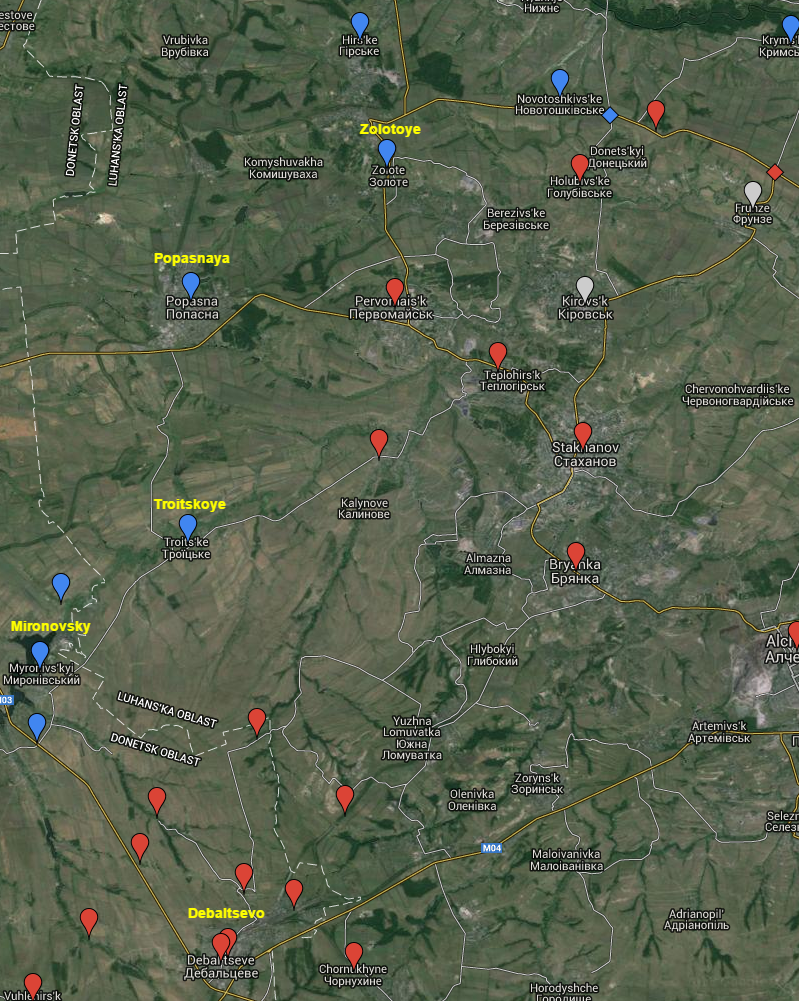 The retaking of Debaltseve last month looks likely to mark not a climax that will help freeze the conflict in place, but rather the opening of the gates to a new phase of expanded offensive operations. The reasons for this are the road and rail routes passing through the devastated town. Debaltseve is a vast switching hub for the Donbass’s railways. Control over the city makes establishing internal communications and resupply throughout the region significantly more feasible, a key goal for an aspiring statelet.

Prior to the liberation of Debaltseve by Ukrainian forces last summer, dozens of convoys of armor, personnel, and artillery made their way from Russia to Donetsk and other front-line positions via the border town of Krasnodon, and then Luhansk and Debaltseve. Now that this link between the two separatist capitals has been re-established, the flow of arms and fighters from Russia to the front lines is only likely to increase.

The withdrawal of artillery from some front-line areas near Donetsk in late February means little when attacks intensify elsewhere. Indeed, after a brief lull following the fall of Debaltseve, the shelling of the Bakhmutka area has resumed with a strike on Krymskoye on Feb. 22 and Popasnaya the following day. Popasnaya residents reported that the town had suffered the most intense shelling in two weeks on the night of Feb. 24 to 25.

Having worked on Mariupol and the Bakhmutka highway incessantly throughout the last cease-fire, and now with increased fighting capacity thanks to the retaking of Debaltseve and the freeing-up of forces previously assigned to that city and the Donetsk Airport, it seems highly unlikely that the Kremlin’s army and proxies will stop where they are.