Snap Poll: Is the Iran Deal Good for Your Country’s National Security?

We asked scholars about Israel, Iran, and how Israel feels about the Iran nuke deal.

Political pundits and think-tank analysts weren’t the only ones weighing the pros and cons of a nuclear deal with Iran or feeling concerned with how that deal might tip the balance in the Middle East. This latest Snap Poll of international relations (IR) scholars, conducted by the Teaching, Research, and International Policy (TRIP) project at the College of William & Mary, in collaboration with Foreign Policy, is the fourth in this series. It includes responses from 1,054 of all 4,185 IR scholars at colleges and universities throughout the United States. In addition to their responses, we report the results of a shorter simultaneous survey of all IR scholars in Israel. Of the 151 Israeli scholars polled, 47 responded, yielding a slightly higher response rate. While U.S. scholars of international relations believe that relations between the United States and Israel are increasingly strained, both U.S. and Israeli scholars generally agree that a nuclear deal with Iran is good for their countries.

The Obama administration’s efforts (as part of the P5+1 countries, which also include Britain, Germany, France, Russia, and China) to negotiate a nuclear deal with Iran has been the subject of contentious debate not only in the United States, stirring strong rebukes from Republican candidates already stumping on the campaign trail, but in Israel’s recent general election campaign as well.

Israeli Prime Minister Benjamin Netanyahu created a political storm with his appearance before the U.S. Congress on March 3. In his much-debated pre-election speech, he warned that the rumored provisions of the deal with Iran would result in a “marriage of militant Islam with nuclear weapons.” After Netanyahu’s speech, 47 Republican senators wrote a controversial letter to Iran warning that any deal negotiated by Barack Obama’s administration could be overturned by the next president or be modified by Congress.

IR scholars in the United States agree that, in the wake of the nuclear negotiations and Netanyahu’s speech to Congress, U.S.-Israel relations are more strained than in the past. On a scale of 0 to 100, with 0 being “very weak” and 100 being “very strong,” IR scholars rated relations between the United States and Israel at about 14 points weaker than they were just a year ago. Israeli IR scholars perceived a similar drop in the strength of U.S.-Israel relations. U.S. scholars don’t expect relations to recover anytime soon, while Israeli scholars are more optimistic. Five years from now, U.S. IR scholars expect relations between the longtime allies to have improved by just 7 points, but Israeli scholars expect an 11-point improvement. 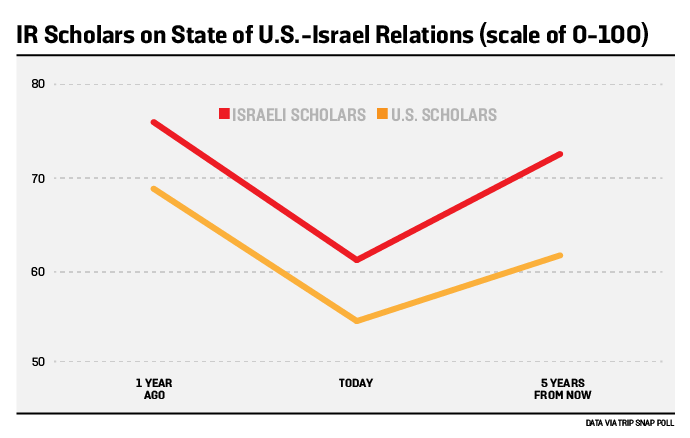 One of the key points of disagreement between the Obama administration and critics of a multilateral nuclear deal is whether Iran should be allowed to retain the ability to enrich nuclear fuel for civilian applications. We asked IR scholars how such a deal might affect U.S. national security. Overwhelmingly, respondents said that this deal would be more helpful than harmful to U.S. national security.

Perhaps even more strikingly, in a parallel survey a plurality of Israeli IR scholars agreed that a multilateral agreement with Iran would be more helpful than harmful to Israeli national security. This view stands in stark contrast to arguments advanced by Netanyahu and the 47 Republican Senators. 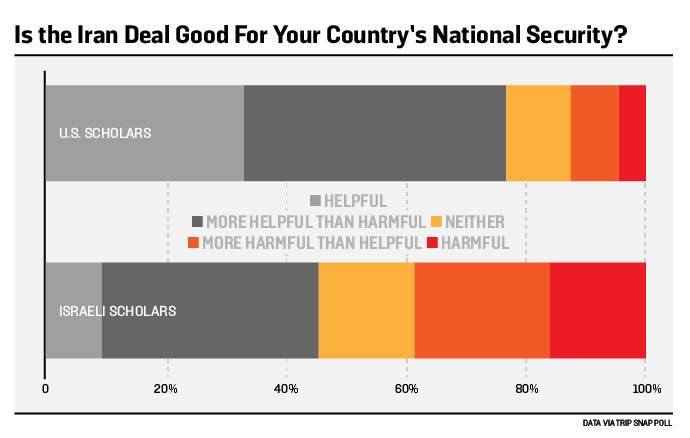 Authorization for use of military force against the Islamic State

Members of Congress were not excited about Obama’s February request for an authorization for use of military force (AUMF) against the Islamic State. Republicans want the authority granted to the president to be broader, while Democrats worry the language in the resolution is not limiting enough. But the message from IR experts is clear: Congress should pass the AUMF.

A majority of IR scholars said that Congress should pass the AUMF in its current form, while just over a quarter of respondents said Congress should pass a modified version. The Obama administration included three provisions limiting the scope of its proposed AUMF against the Islamic State. First, passage of this new AUMF would repeal the 2004 AUMF against Iraq. Second, it would limit authorization to three years. Finally, it would prohibit “enduring” offensive operations. A majority of IR scholars favored both a provision repealing the AUMF against Iraq and a provision limiting the new AUMF to a specific length of time. Forty percent of respondents favored the provision preventing the use of U.S. forces in “enduring offensive ground combat operations.” 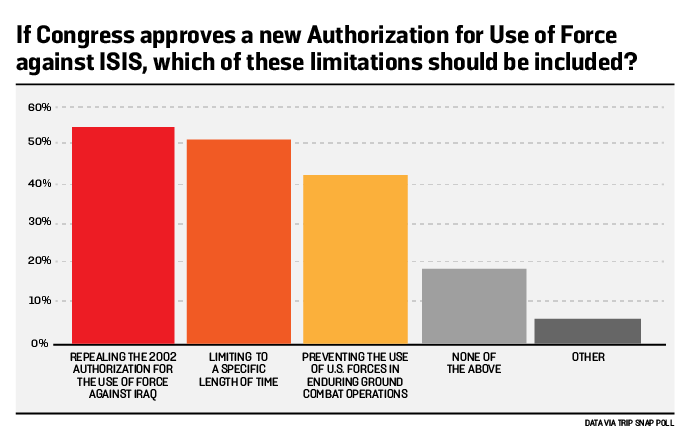 In May 2014, approximately two months after Russia annexed Crimea, we asked IR scholars whether the U.S. government should provide “arms and other military supplies to the Ukrainian government.” Fewer than one-third of IR scholars favored such a policy. Now, 10 months and 6,000 deaths later, we asked the same question and got an identical answer — only 32.8 percent of IR scholars supported the policy of arming Ukraine. Further, scholars who specialize in the study of international security issues are more strongly opposed to arming Ukraine (64.2 percent) than those who study international political economy (51.5 percent). While expert views remain stable in the face of persistent conflict in Ukraine, U.S. public support for arming Ukraine has risen from 30 to 41 percent over roughly the same time period.

One month ago, Greece and its European creditors agreed to a multifaceted deal that would help Greece avoid default in return for implementing economic reforms. The euro immediately surged against the dollar, and Greek bond yields declined as investors applauded the deal. But this optimism in financial markets (and among the German public) has been short-lived. A survey conducted March 10 to 12 by German public broadcaster ZDF found that a majority of German citizens (52 percent) want Greece to leave the eurozone, up from 41 percent only two weeks earlier. Despite the pessimism of German citizens, when IR scholars were asked whether Greece would “still be using the euro as its currency” one year from now, 76.1 percent said yes and only 9.2 percent said no. Those scholars who teach and do research on European issues are even more optimistic (84.2 percent) regarding eurozone stability than other IR scholars were. While few IR scholars of any stripe believe that Greece will soon drop the euro as its currency, those who study international political economy (IPE) were the most likely to expect the return of the drachma.

Previous expert surveys suggest similar patterns. In 2011, we asked IR scholars whether Europe would be able “to maintain the current membership of the eurozone.” Consistent with this year’s Snap Poll results, IPE scholars were the most pessimistic about stability, with only 43 percent suggesting that membership would not change, while those who studied Europe (55 percent) or international organizations (62 percent) were more optimistic about the persistence of the eurozone’s current membership. These results likely follow from analytical starting points — those who think of the European Union as a customs zone or optimal monetary union see dramatic economic differences between members as a powerful centrifugal force. Those who see the EU project in sociological terms (where European identity mitigates disintegration) or in institutional terms (where international rules guide behavior) are more likely to predict stability.

Susan Peterson is the Wendy and Emery Reves professor of government and international relations and the co-director of the Global Research Institute at William & Mary.

Ryan Powers is an assistant professor of international affairs in the School of Public and International Affairs at the University of Georgia.

Michael J. Tierney is the George and Mary Hylton professor of government and international relations and the co-director of the Global Research Institute at William & Mary.

The Greenback Needs a Digital Makeover

Italy’s Sardines Want to Stop Matteo Salvini. They Might End Up Strengthening Him.

Iran Has a Bitcoin Strategy to Beat Trump