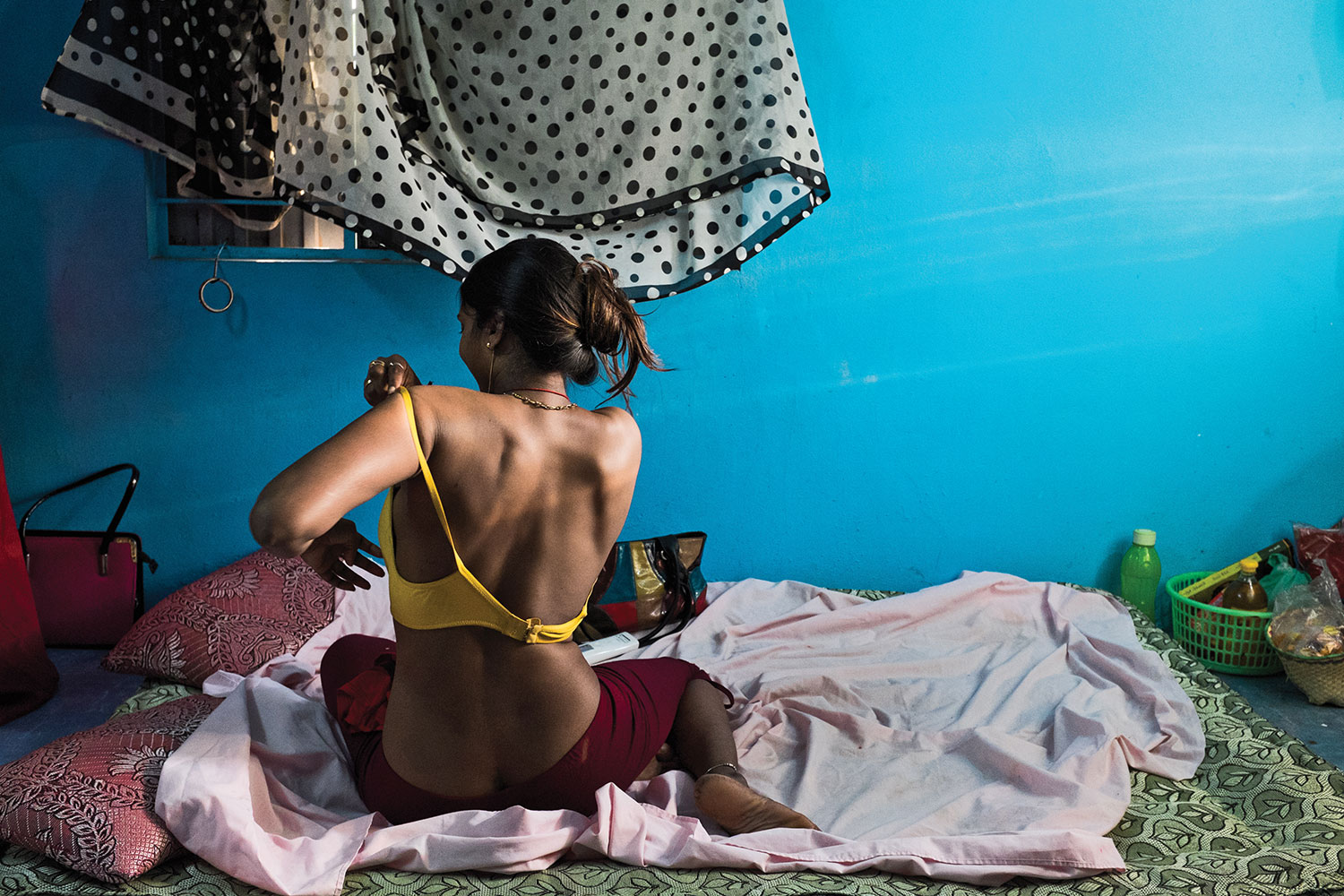 Malaika has always considered herself a woman. And eight years ago, at age 22—after some 12 plastic surgeries and a series  of hormone treatments—her body finally matched her identity. Today she’s among the hundreds of thousands in India who identify as hijra, comprising a community of eunuchs, cross-dressers, and transgender people.

Revered for centuries in South Asian culture, the hijra population was criminalized under colonial rule. Since then, hijras have been targets of police violence and discrimination, but they’ve also managed to maintain certain esteemed social roles. Last year, the Indian Supreme Court recognized hijras’  right to identify as a third gender.

Unsurprisingly, perhaps, this charged history has created tight networks among hijras. In the city of Chennai, Malaika—known widely by only her first name—is more than just a “respected member of a united community,” says French photographer Yannick Cormier. She serves as both a mentor and matriarch within it. 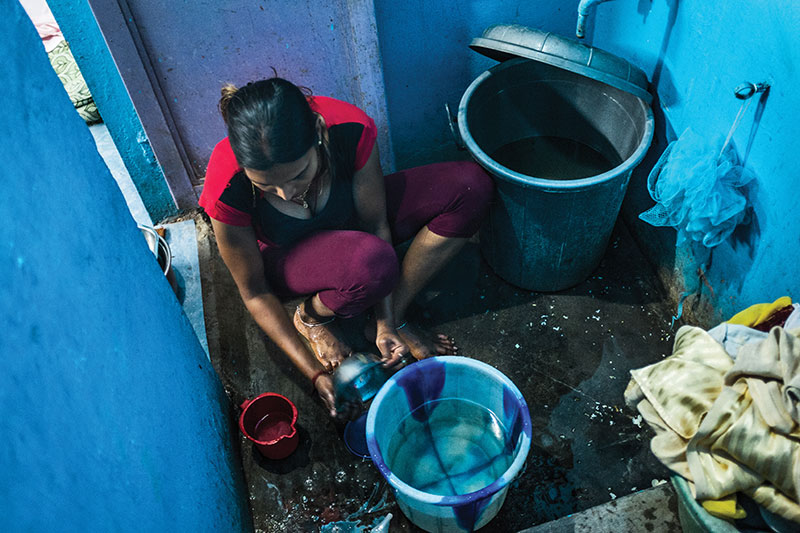 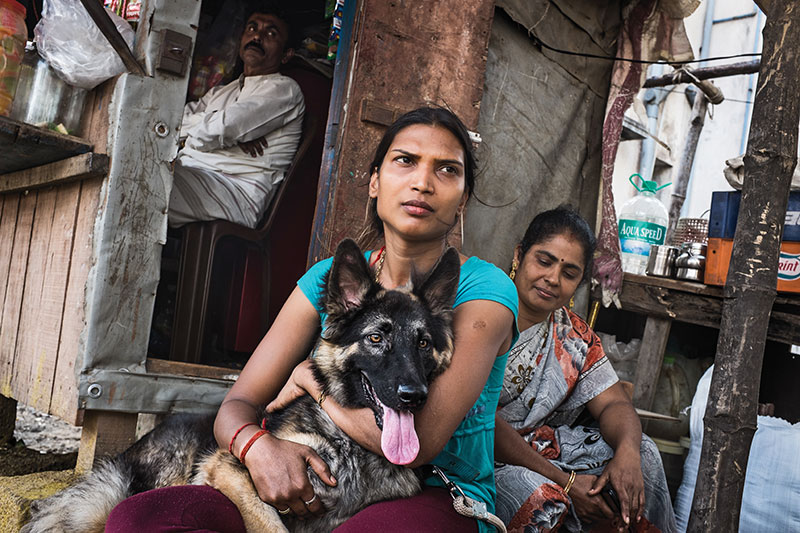 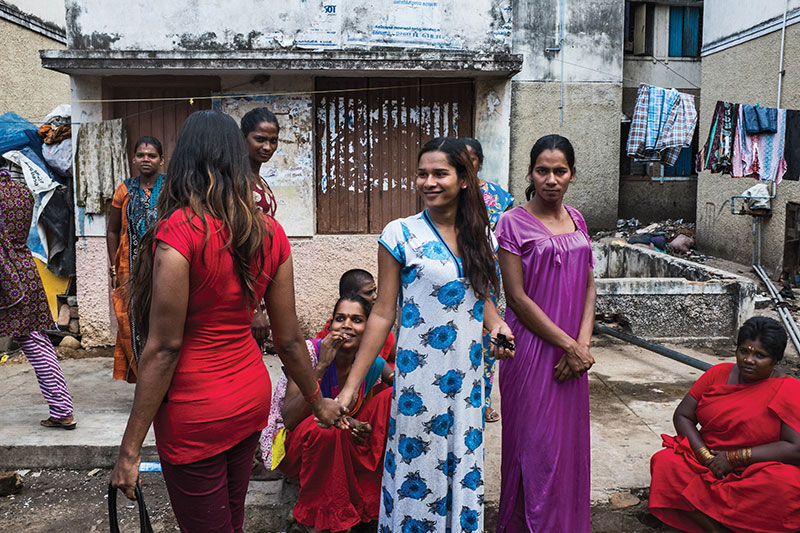 Malaika, who has lived in the Royapuram neighborhood all her life, has a well-established routine: Each morning she washes the dishes used to perform a puja, or ritual prayer, to the Hindu goddess Kali—an incarnation of feminine energy. To stay in the loop on the comings and goings of those around her housing complex, Malaika meets with neighbors and monitors concerns about living conditions and other community issues. 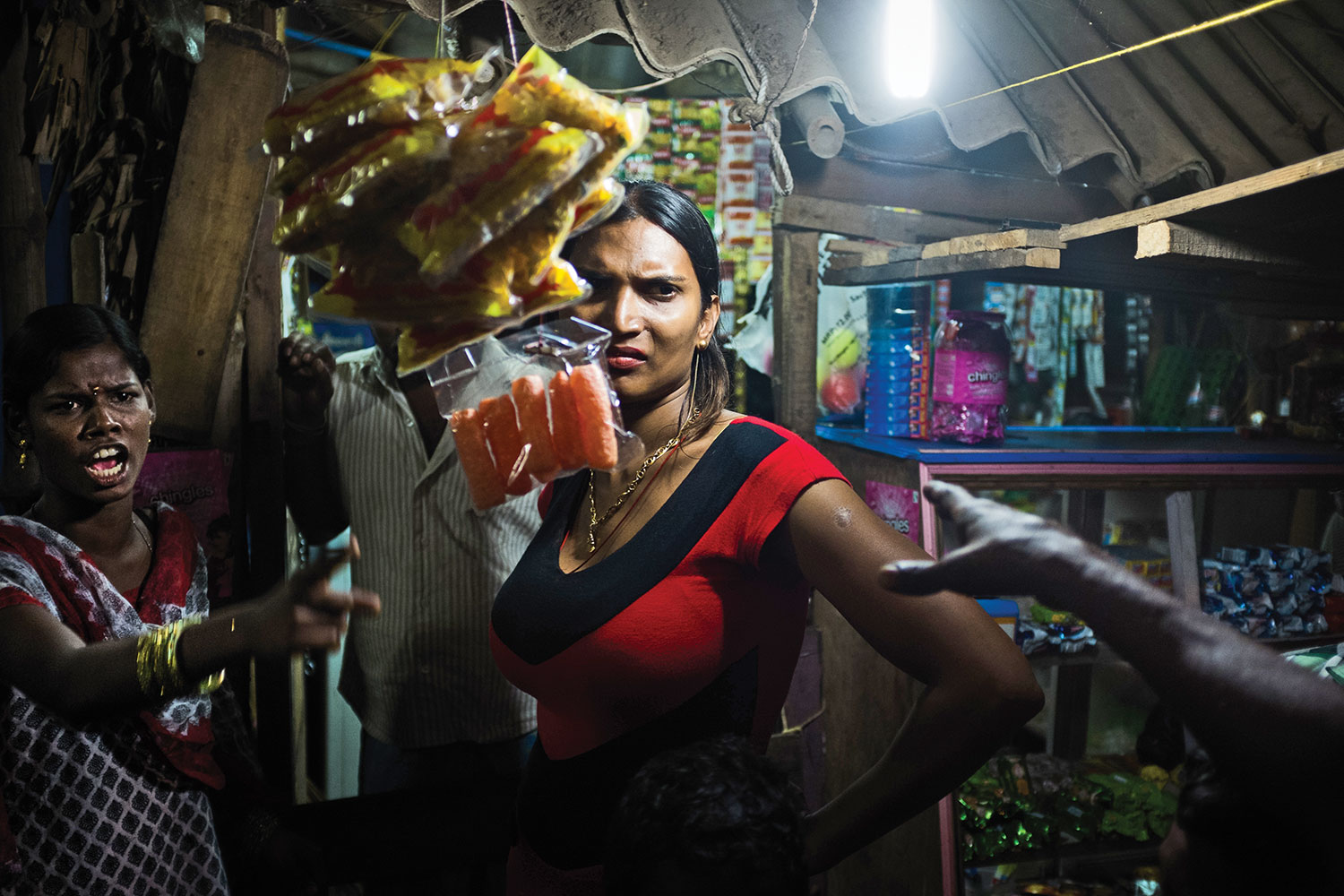 While close-knit, the hijra community is also very hierarchical. Malaika is a “queen”—others are “gurus,” older members who often supervise queens, or “apprentices,” younger people who have yet to undergo sex-reassignment procedures—a distinction that commands respect even outside her hijra network. Consequently, she is often asked to mediate local disputes. Here, Malaika arbitrates a family fight after the daughter (left) accuses her father (arm outstretched at right) of molestation. Malaika gives him an ultimatum: If he sexually abuses the girl again, Malaika will inform the police. 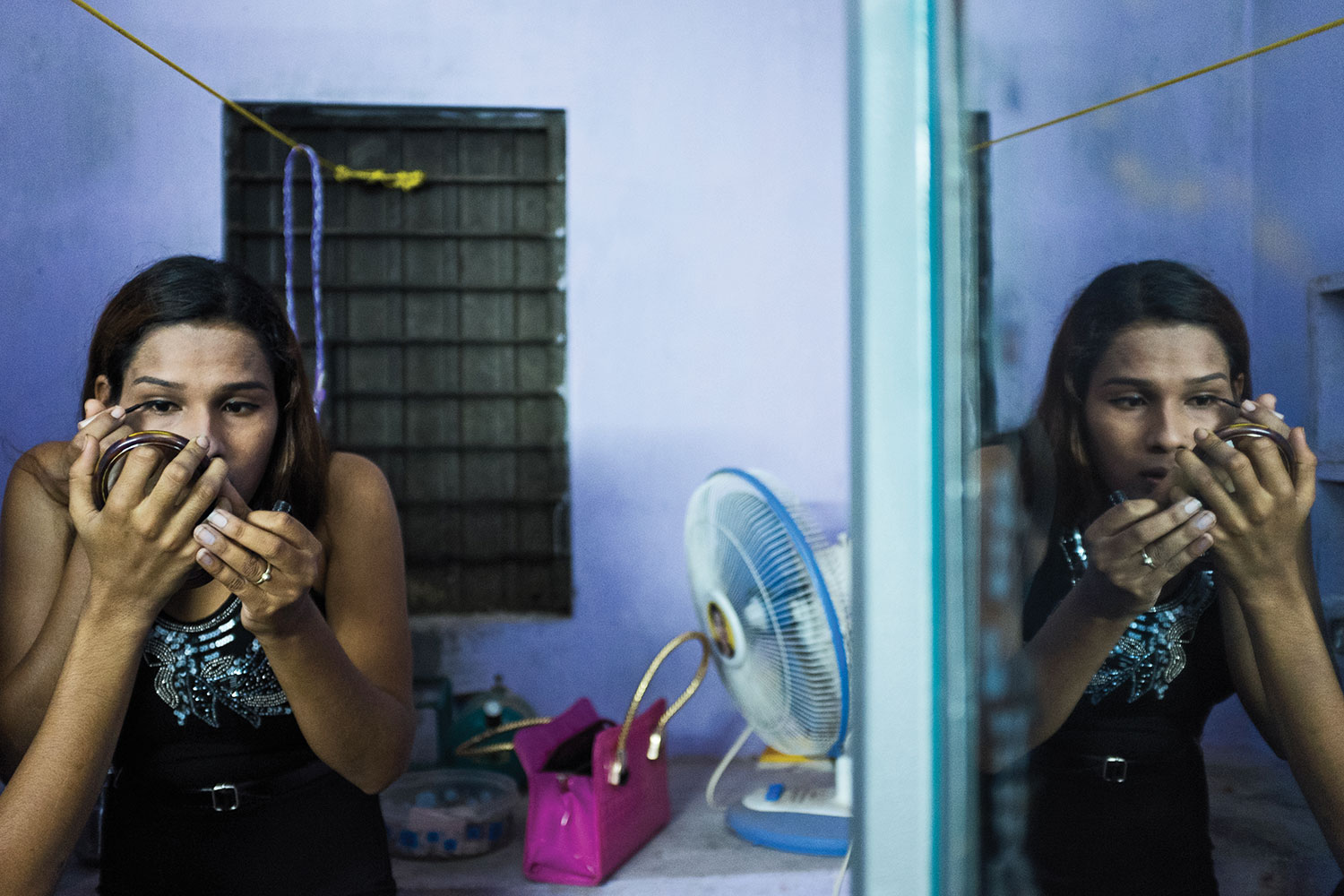 Diadana is one of Malaika’s protégés. Both Diadana and Malaika make a living in sex work, a profession that attracts many hijras, who often face employment discrimination in mainstream sectors. Here, Diadana applies makeup before meeting a client. 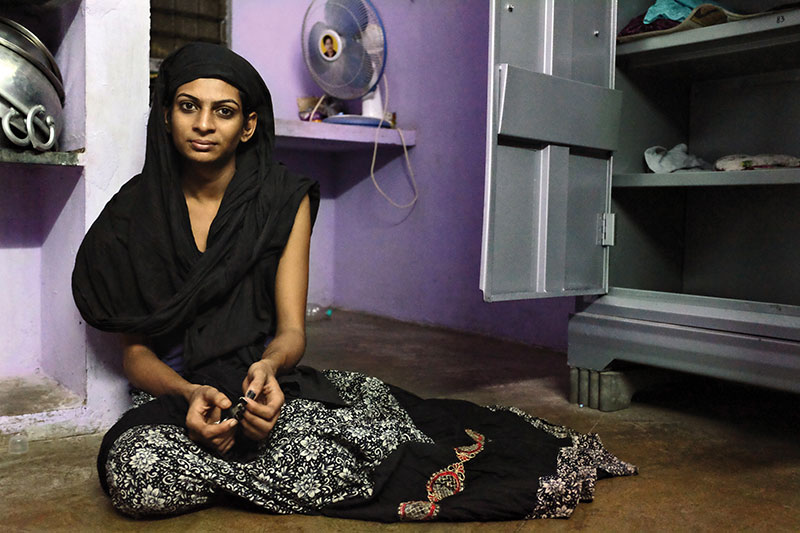 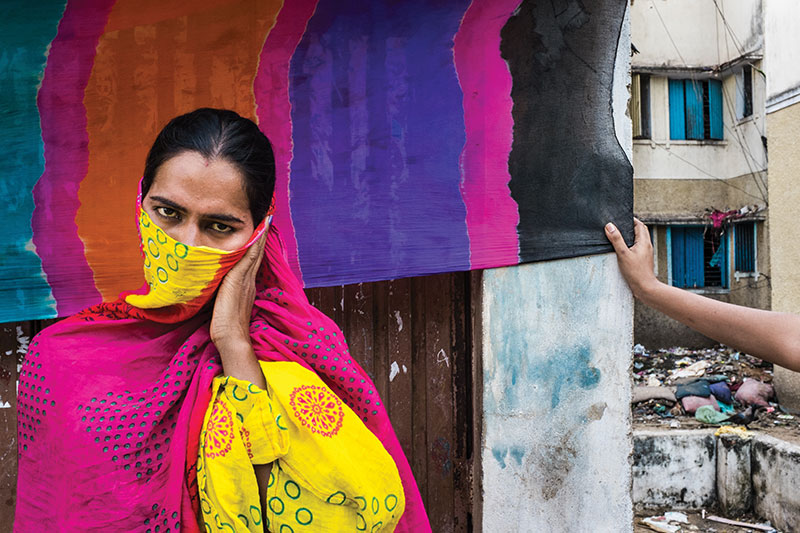 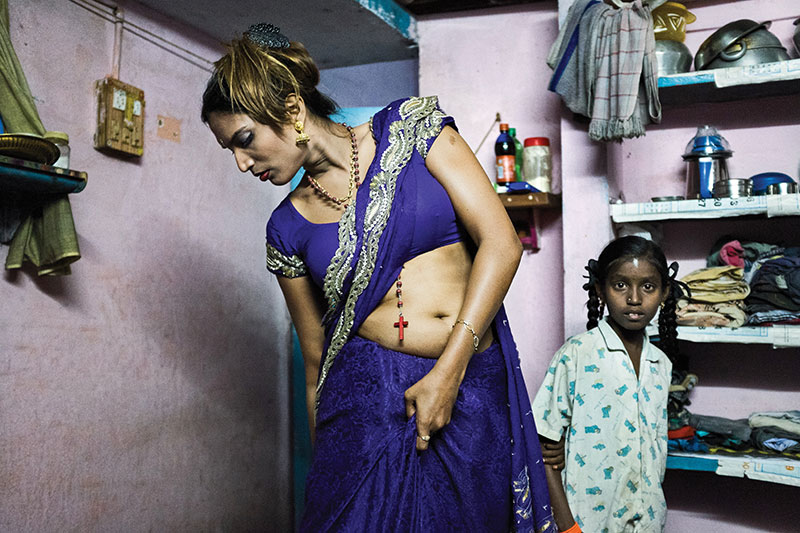 As part of her duties as a queen, Malaika acts as an informal guardian for younger hijras, such as Rexona (left). She offers them personal and professional guidance and may even help raise money for cosmetic surgery and other treatments required for transitioning. One of Malaika’s apprentices, unidentified, covers her face (middle). Syncretism is common in India. Malaika converted from Hinduism to Christianity about a year ago, but she continues to perform certain rituals of her old religion. Here, standing next to one of her neighbor’s daughters, she adjusts her sari before going to temple to perform her daily puja (right). 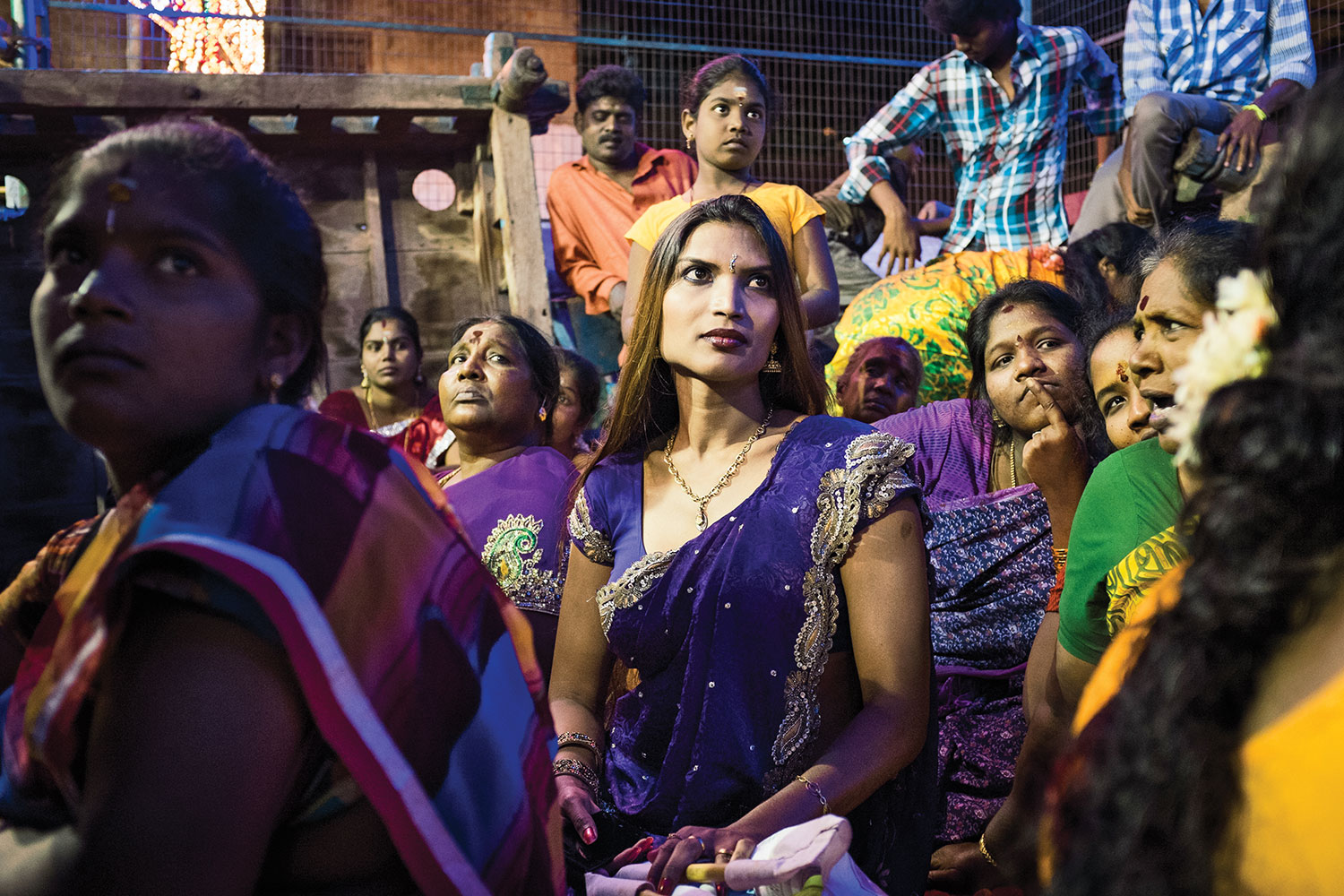 At a festival, Malaika honors Shiva, one of the most important deities in the Hindu faith.