There are up to 2,000 cases of the deadly disease annually worldwide. Could the Islamic State create even more?

The first victim of the Ebola epidemic in West Africa was almost certainly a 2-year-old boy in the small village of Meliandou in southeastern Guinea. Since his death in December 2013, the disease — whose previous outbreaks killed at most hundreds of people, and generally in rural areas — has infected thousands of people across West Africa, as well as a handful of people around the world, due to porous borders, ill-equipped health systems, and a faulty international response. The virus has drawn comparisons to one of history’s greatest biological killers: the plague, which killed tens of millions of people from China to Europe in the “Black Death” of the 14th century.

As it happens, toward the end of 2014, a country on the other side of Africa was coping with the real thing. In Madagascar, as of late November, at least 119 people had been infected and 40 had died in an outbreak of the plague. Cases were reported in the capital and 16 districts across the island nation.

This is not an isolated incident. As many as 2,000 plague cases are reported each year to the World Health Organization (WHO). In 2013, there were 783 cases and 126 deaths from the illness. The plague occurs in countries such as Madagascar with poor living standards and weak health services, but elsewhere too: In 2014, at least four people contracted it in Colorado.

Centuries after the Black Death, humans have come a long way in combating this deadly, if minuscule, foe. (The plague is caused by a  microscopic bacillus, or rod-shaped bacterium.) But with regular outbreaks and even fears that it could be used as a biological weapon, the plague is anything but an artifact of the past. 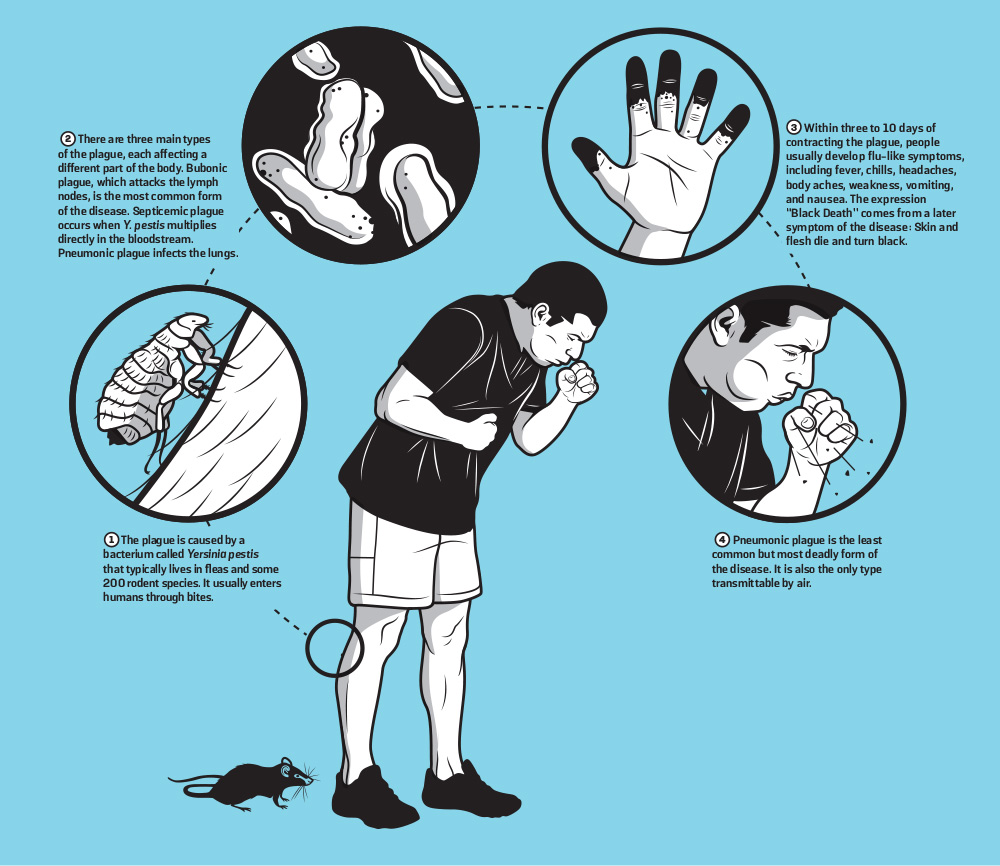 The first account of the plague may be found in the Old Testament. According to the text, after stealing the Ark of the  Covenant from the Israelites around 1000 B.C., the Philistines were afflicted by a  devastating outbreak of tumors. (The bubonic plague causes swollen lymph nodes that can look like such growths.) The first confirmed pandemic occurred around A.D. 540, when the Justinian plague, named for the Byzantine emperor at the time, began in North Africa and spread to the Middle East and then to Europe. The most recent pandemic, which killed around 12 million people, began in China in the 1850s and lasted well into the 20th century.

How to End a Plague

In 1896, Russian microbiologist Waldemar  Haffkine began developing an effective plague vaccine using inactive Y. pestis and, among other ingredients, goat flesh. He tested it on himself and prisoners in a jail in Bombay, India. Since then, vaccinations, antibiotics, insecticide development, and improvements in living conditions have helped drastically cut cases of the plague. In 2003, researchers in Madagascar developed a rapid diagnostic test that identifies Y. pestis in just minutes. Today, if the plague is promptly diagnosed and treated with antibiotics, its mortality rate drops from 60 percent to less than 15 percent, according to the WHO.

Between 1989 and 2003 — the most recent comprehensive WHO data set — nearly 40,000 cases of the plague were recorded in 25 countries, with transmission usually occurring within, not across, national borders. The three most endemic countries, as per the WHO, are Madagascar, Peru, and the Democratic Republic of the Congo. According to the Centers for Disease Control and Prevention, an average of seven U.S. cases are reported each year, usually in the rural Southwest, where the plague is entrenched in various rodent species. In July 2014, China quarantined 30,000  people in the city of Yumen after a man died of bubonic plague.

In 1346, according to Italian notary Gabriele de’ Mussi, the Mongol army hurled plague- infected cadavers into the city of Kaffa, in present-day Crimea, to break a years-long siege. The Mongols weren’t the last to consider how the plague might be used in war. During the Cold War, the Soviets’ Biopreparat project allegedly stockpiled the plague for use in intercontinental ballistic missiles. In 2014, Foreign Policy reported on the contents of a laptop recovered from the Islamic State that included, among other things, a 19-page document detailing how to use infected animals to weaponize bubonic plague.

Why Is China Sabotaging Its Own Athletes?

How to Trim the Defense Budget Without Harming U.S. Security

Washington, Trump, and Cults of Personality