Heroin abuse is rampant in the Indian state of Punjab, and a generation of young, male addicts has nowhere to turn for help.

AMRITSAR, India — Rajesh Gill walks down a dirt road on a cool December night. He looks over his shoulder for police and, seeing none, rolls up his right sleeve. Lean, short, and wiry, Gill makes a fist to plump the veins in his forearm and injects himself with an Afghan heroin compound mixed with water drawn from a public fountain, the moonlight guiding his hand. After injecting himself, he cracks the empty vessel in half and tosses it into a nearby field, where other bloody needles lay scattered in the tall grass. “I feel so high when I shoot up,” Gill says as he lights a cigarette, his eyelids fluttering. “My voice changes; my head spins. The high right now is so strong — it feels like enough to last me 10 or 12 hours.”

Welcome to India’s heroin alley. India’s 1.2 billion people find themselves uniquely positioned between the Golden Triangle composed of Myanmar, Laos, and Thailand, and the Golden Crescent composed of Afghanistan, Pakistan, and Iran. These two regions produce the vast majority of the world’s heroin — Afghanistan alone accounts for roughly 75 percent of the world’s supply — due to a combination of political instability, widespread corruption, and the ideal mixture of climate, soil, and terrain to cultivate opium poppy, the plant from which the drug is made. And while Indian statistics are notoriously unreliable, heroin use appears to be growing across the country.

The problem is especially bad in Punjab, a relatively wealthy state of 28 million people in northwestern India. Gill, 24, is among the estimated roughly 70 percent of young Punjabi men who man suffer from a substance abuse problem, according to an October 2012 study published by the Rajiv Gandhi Institute for Contemporary Studies, a think tank. Since then, the percentage has likely increased, according to several experts interviewed for this story. And like many of Gill’s peers, Afghan heroin, smuggled across the nearby border with Pakistan, is the drug of choice. 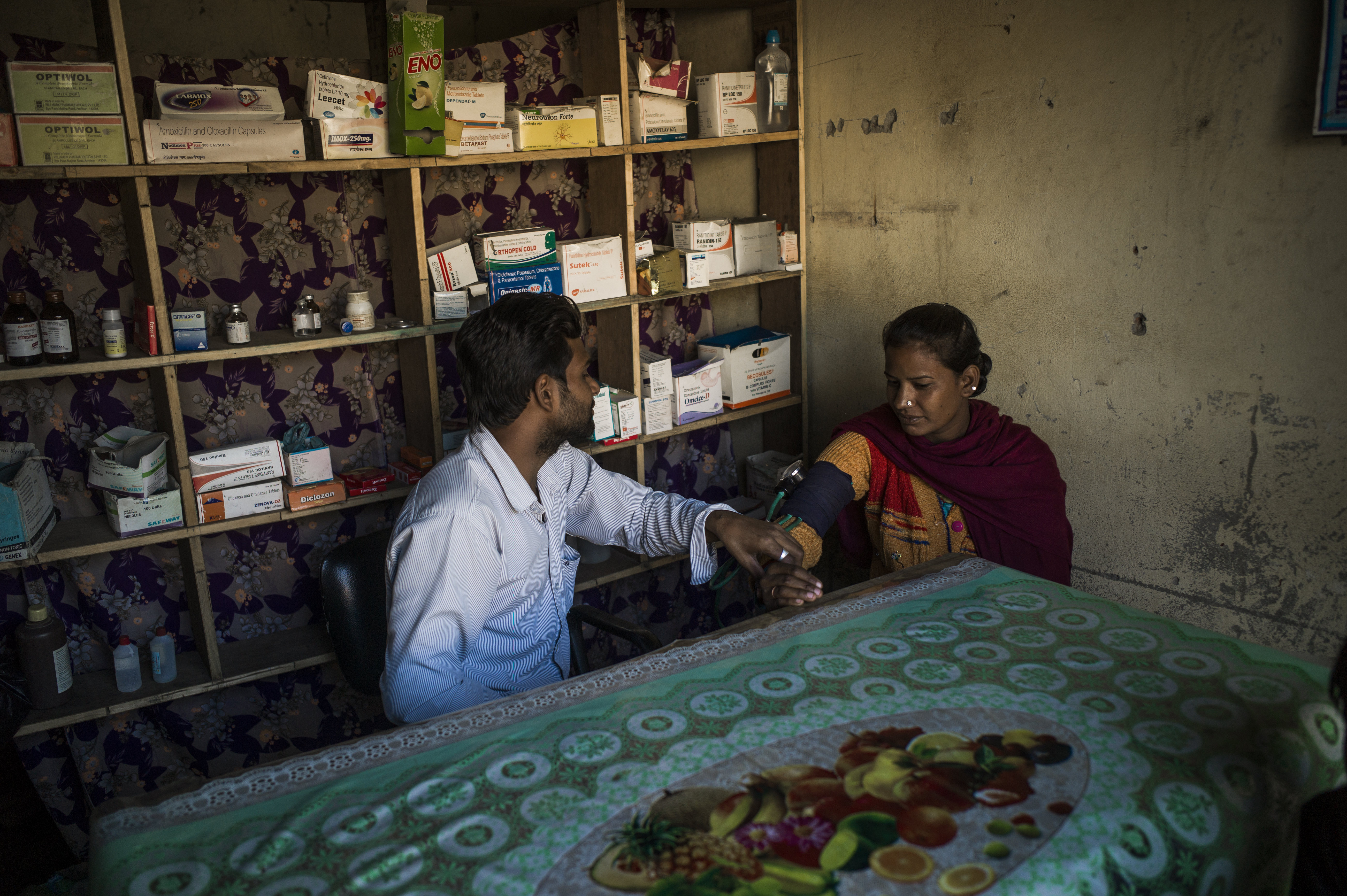 Gill takes the pulse reading of a patient at his clinic in Teri village.

In Manipur, another addiction-plagued Indian state where heroin spills across the border from Myanmar, a hit costs roughly 80 cents. The heroin in Punjab, however, is 10 times more expensive and far more likely to be cut with damaging chemicals, according to users in both regions — putting addicts like Gill at considerable physical and financial risk.

Gill lives in Ajnala, a small, dusty town surrounded by farmland and fields abloom with yellow mustard flowers, 20 miles from the state capital of Amritsar. Inside these fields are what K.S. Pathani, a doctor who works with the Don Bosco Navjeevan Society (DBNS), a charity organization in Ajnala that specializes in drug addiction, calls “hot spots”: areas where locals gather to shoot up. A tour of hot spots during daylight hours reveals piles of discarded heroin needles strewn among the grass.

Pathani says that the roughly 300 patients who visit the DBNS clinic on a regular basis represent only a small fraction of the users in the region. A rectangular box outside his office is filled with used needles, many of them colored crimson with dried blood. A small television in the corner plays mostly B-grade Hindi films on a loop. Gathered around the television is often a group of heroin addicts who visit the clinic nearly every day for clean needles or the company of fellow users.

One regular visitor is Rajbeer Singh, 21, who has been struggling to complete high school for the past four years because of his addiction. Bearded and thin, he sits with his legs folded, wearing a knit cap and a winter coat. Sitting alongside Singh at the clinic were his friends — a wedding DJ, a rice farmer, an unemployed drifter — all addicted to heroin with little if any money on hand to support the habit. “Life feels empty and free of pain when I use,” Singh says. Asked about how he supports his habit, Singh says that he takes the money to pay for drugs from his family members, sometimes with their permission and sometimes without it. 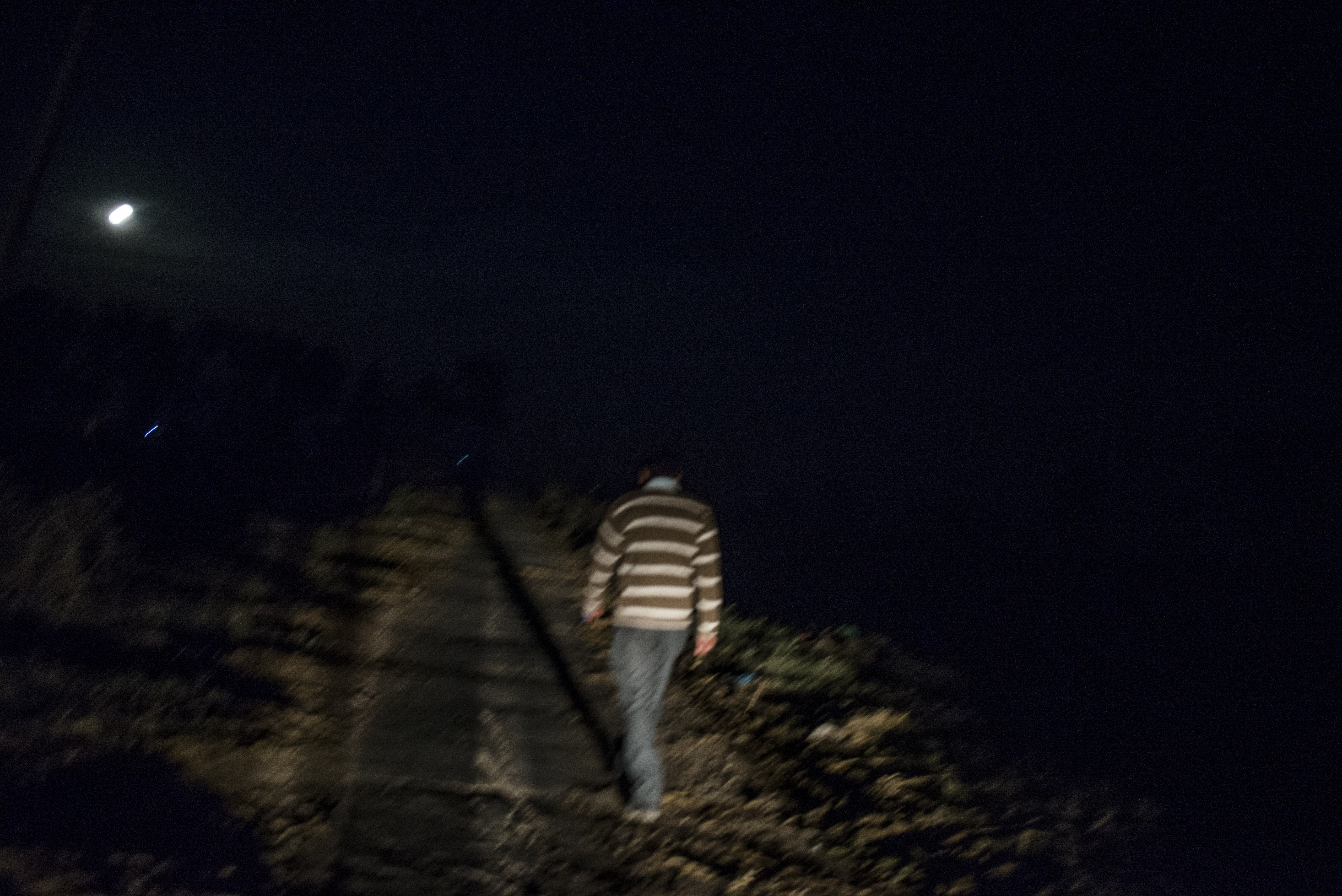 Gill walks to a hot spot — an area where heroin users typically go to shoot up — along the Ajnala-Amritsar Highway.

Pathani says heroin use skyrocketed around 2012, and with that came increased crime. Pathani blames a high student dropout rate, a stagnating economy, and a lack of jobs for the surge in drug use and other criminal activity over the last few years. His home was burglarized a few years ago — he suspects addicts were responsible. “Someone had removed all of the taps and wash basins in my house to resell them,” he recalls. Darshan Singh, a 53-year-old assistant inspector in Ajnala’s police department, said that heroin and theft arrests are rising in Ajnala “by the minute.”

Gill’s addiction highlights the financial toll heroin can take on users and their families. He injects a double dose each time he shoots up, once in the morning and once at night. Gill, however, has it pretty good. He’s an unlicensed general practitioner and still manages to run a clinic. But the roughly $7 per day that he brings in from his practice barely pays for the first of those four hits — and he still has to pay for the rental and maintenance costs of his office and basic survival items for his family, like food and medicine. The small farm he owns helps offset his heroin debts, but less fortunate users like Rajbeer Singh and his friends can run monthly losses ranging from roughly $500 to $1,600, depending on the demands of their addiction.

“Until our government and law enforcement get serious about this problem, it will go on,” Pathani says. “But our bureaucracy is corrupt, and they are benefiting from the drug trade through bribes.”

Many residents of Punjab echo Pathani’s criticism of their government, and several high-profile local news stories have done little to quell their concerns. In December 2014, authorities reportedly questioned the state’s revenue minister, Bikram Singh Majithia, in regards to his alleged involvement in laundering international drug money. Three Border Security Force agents, as well as a representative of the Punjab Police, declined to answer questions about the policing of the drug trade, and calls to Punjab Chief Minister Parkash Singh Badal’s office were not returned. 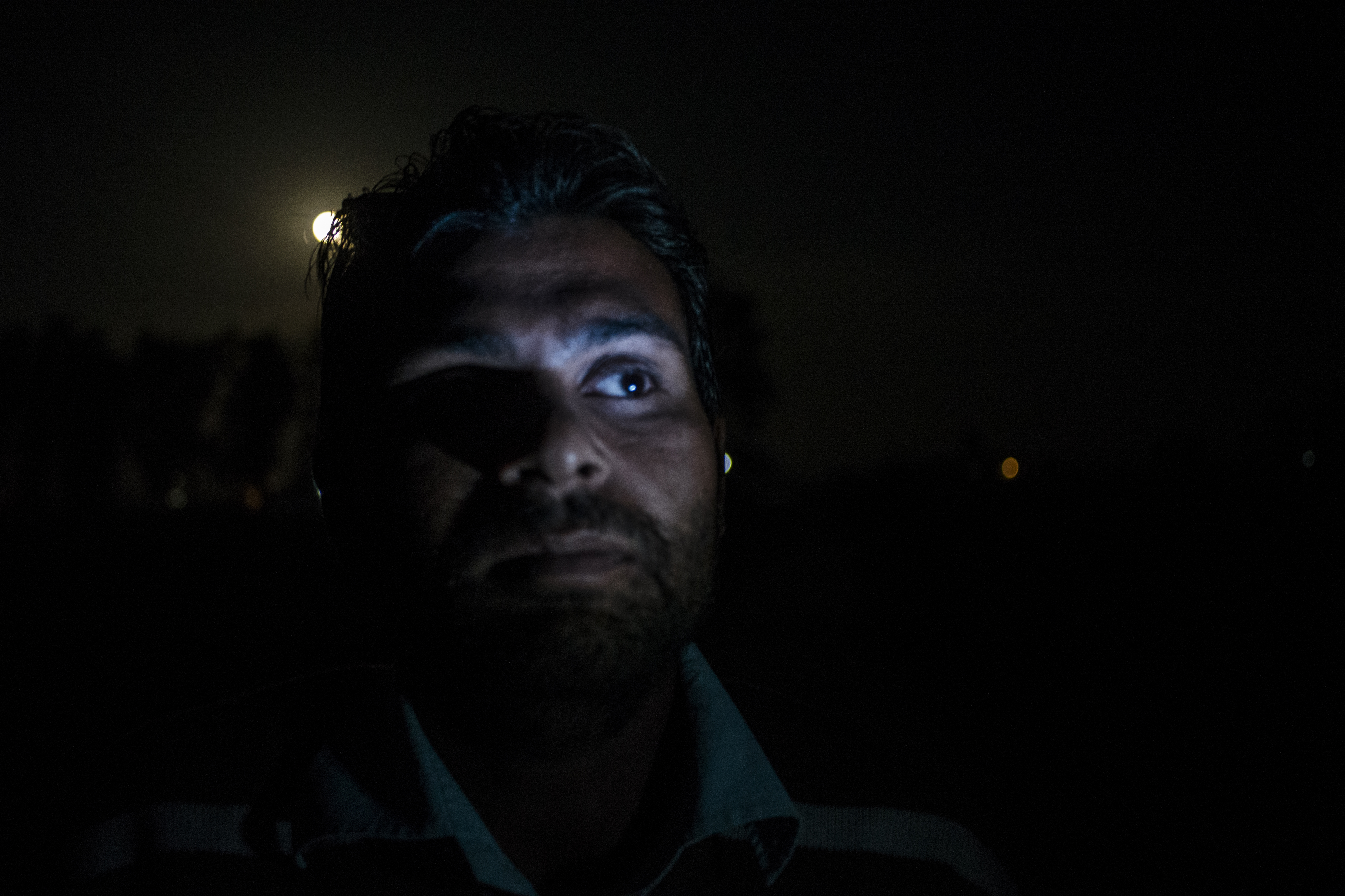 Gill poses for a photo after shooting up heroin near his village.

The state government has taken action against the drug trade. In September, the Times of India reported that seizures of heroin have jumped 50-fold over the last decade — the authorities now seize roughly 132 pounds a month.

Despite this, users, police, and one member of the Border Security Force acknowledged that the flow of illicit drugs into Punjab is still increasing. “They stuff PVC tubing underneath the fences,” says Dharma Ram, 50, an inspector with the Border Security Force, pointing to the ominous-looking fences topped with barbed wire that run along Punjab’s 190-mile border with Pakistan. “And then they attach the heroin to metal chains and pull them through the tubing and into the fields.” Punjab’s border fence with Pakistan cuts across farmland and is electrified at night — making the PVC tubing a necessity in order to avoid triggering a shock. From there, the heroin travels across roughly a mile of what is supposed to be a heavily policed environment and then across a canal, before passing into the anonymity of Punjab’s rural streets.

Due to the ubiquity of heroin in Punjab, a strange air of normality belies the life-and-death nature of the drug among its residents. Gill’s first injection comes shortly before noon, just before he practices medicine on some of the roughly 230 families living in Ajnala’s Teri area — a complicated task he performs while high, and without a formal medical school education to guide him. Patients come to Gill and explain their symptoms; he administers treatment, such as a shot of vitamins or antibiotics, sometimes doing so in a crawl space — behind a row of boxed pharmaceuticals and a frayed bedsheet that acts as a curtain. Gill’s second heroin injection, like the one taken in the field, comes just after dinner, and before he returns home to tuck his 2-year-old son, Kanav, in bed.

Assistant Inspector Singh, whose jurisdiction in Ajnala covers Gill’s home in Teri, spoke bluntly when asked how Punjab’s troubles with heroin might be resolved. “We don’t have enough men to police what is happening here right now,” he said. “Drugs are becoming bigger and bigger here, day by day.”

Research for this article was funded by a grant from the Pulitzer Center on Crisis Reporting.