The Somalia-based terrorist group's attacks in Kenya are ramping up in frequency -- and show no signs of letting up soon.

After the Somali militant group al-Shabab carried out a gruesome massacre of 148 people in the Kenyan city of Garissa on April 2, two questions repeatedly surfaced among policymakers and analysts: Did this attack signal that al-Shabab would increasingly focus on Kenya? And did the horrific attack at Garissa prove the success or failure of Somalia as a counterterrorism model? After all, last September President Barack Obama trumpeted U.S. policies toward Somalia, where the United States had “successfully pursued” al Qaeda for years.

Some officials have continued to describe Somalia as a success. As one anonymous senior official opined to the Washington Post, the attack shows that al-Shabab is “desperate. And as much as we hate to think about it, this is what desperate groups do. They try to have smaller teams go out and [conduct] higher-impact operations.”

But this argument is not only overly simple. It also makes the mistake of conflating al-Shabab’s fate in Somalia with its activities in Kenya. It’s true that the group’s overall strength has declined since its peak in 2011, when it was the dominant force in southern Somalia and able to impose its harsh version of Islamic law on the population there. But al-Shabab’s strength, vitality, and lethality, have steadily risen in Kenya in recent years, an important part of the group’s long-term strategy.

Al-Shabab is now composed of two largely separate, though interlocked, organizational structures in Somalia and Kenya. Its organization in Kenya, best understood as a branch of the Somalia-based mother organization, is commonly known as al-Hijra. The group’s leadership has received training in Somalia, and is subordinate to the Somalia-based senior leadership. The formalized relationship between the two can be discerned, for example, by the fact that al-Shabab appointed al-Hijra’s new emir in January 2012.

While al-Shabab has built its indigenous capabilities in Kenya, its network in Somalia has also conducted cross-border operations. Kenya has named Mohamed Mohamud, a regional al-Shabab commander responsible for external operations targeting Kenya, as the architect of the Garissa attack. In addition to the forces Mohamud commands in Somalia, a Kenyan government document claims that he has “an extensive terrorist network within Kenya.” It is not clear at this point whether Mohamud’s Somalia-based or Kenya-based forces bear the greatest responsibility for the attack in Garissa.

Al-Shabab’s interest in striking Kenya has risen noticeably since the militant organization lost its last urban stronghold in southern Somalia, the port city of Kismayo, on Oct. 2, 2012. The loss of Kismayo, vital to al-Shabab’s control over both import and export tax revenues and Somalia’s charcoal trade, significantly diminished the group’s power in southern Somalia. Kenyan military forces played an important role in this setback for the jihadi group, as Kenyan troops were some of the first to enter Kismayo, ahead of Somali government and African Union Mission in Somalia (AMISOM) forces. Kenya’s military involvement would contribute to al-Shabab’s decision to escalate its campaign against Kenya.

Following the loss of Kismayo, al-Shabab has continued to lose territory in Somalia and has seen many of its leaders killed. In September 2014, a U.S. airstrike killed the group’s emir, Ahmed Abdi Godane. Al-Shabab lost its stronghold of Barawe the next month to advancing AMISOM and Somali government forces. Today, the jihadi group still carries out regular attacks in Somalia, but has recognized that it is incapable of militarily defeating AMISOM, which is aligned with the nascent Somali government. Instead, the group has focused on outlasting the African Union and the Somali government through a war of attrition punctuated by regular terrorist attacks.

Al-Shabab’s growth in Kenya fits into this strategic picture. Just as Al-Shabab is waging a war of attrition against AMISOM, the group is betting that by escalating its operations in Kenya it can erode Nairobi’s support for military operations within Somalia. Indeed, after both the Mpeketoni and Garissa attacks, there have been calls by some Kenyan politicians to draw down from Somalia, though they remain at the margins of Kenyan political discourse for the moment. Whether al-Shabab can succeed in undermining Nairobi’s will is questionable: Kenya carried out airstrikes against a pair of al-Shabab targets in Somalia’s Gedo region days after the Garissa massacre. Despite questions about whether the group’s strategy will succeed, it is clear that al-Shabab-led violence in Kenya is in fact growing.

Al-Shabab’s attack on the Westgate shopping mall in Nairobi in September 2013, which dragged on for four days and killed 67 people, was an inflection point for jihadi attacks in Kenya, which have escalated markedly since then. In June 2014, al-Shabab slaughtered Kenyan civilians on back-to-back days in the small agricultural town of Mpeketoni in Kenya’s Lamu district, killing a total of 63. Given Mpeketoni’s proximity to the Kenyan coast, these attacks were devastating to Kenya’s tourist economy. (Indeed, after the attack in Mpeketoni, al-Shabab issued a statement warning that “Kenya is now officially a war zone and as such any tourists visiting the country do so at their own peril.”) They also bore a striking resemblance to al-Shabab’s massacre in Garissa: authorities were slow to respond, allowing the attackers to slaughter citizens for hours. A survivor told the Daily Beast that non-Muslims were singled out for execution.

Al-Shabab similarly targeted Christians in two large-scale attacks in Kenya late last year. In November, militants boarded a bus in northern Kenya and executed 28 passengers who were unable to recite the Islamic declaration of faith. In December, al-Shabab forces raided a quarry near the Somali border and separated Muslims from Christians before executing 36 Christian quarry workers. Singling out Christians serves the dual purpose of decreasing the likelihood that al-Shabab will alienate Muslims, while at the same time stoking the flames of sectarianism. Though the attacks have not managed to incite large-scale sectarian violence, many observers are concerned that Kenya’s heavy-handed approach to Muslims believed to be involved in terrorism, and the government’s suspected involvement in extra-judicial killings, may play into al-Shabab’s hands.

But the group’s growing strength in Kenya can be understood not just from its spectacular attacks. It’s the regularity that is especially troubling. We have maintained a database of attacks in Kenya since Kismayo fell, which tells the bigger picture. In the two-plus years, al-Shabab has killed over 550 people in operations in Kenya, while the lethality of its attacks has grown. Between September 2012 and the Westgate attack in September 2013, the group carried out at least 42 attacks in Kenya, resulting in 71 to 77 deaths. (The discrepancy in casualties is due to conflicting news reports.) Since the Westgate attack, however, al-Shabab has launched at least 63 attacks in Kenya, killing between 410 and 415 people. 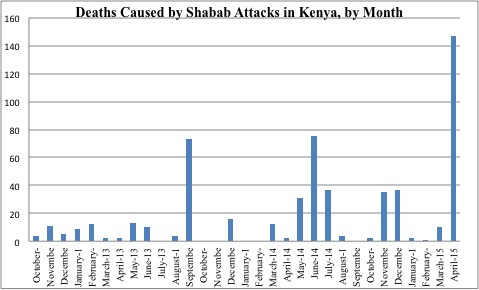 The Garissa attack does not indicate that al-Shabab is now turning its attention toward Kenya. It already did so, years ago.

Does all of this undermine the U.S. government’s claims that the fight against al-Shabab should be seen as a model for counterterrorism operations? Not necessarily. Just a few years ago, al-Shabab controlled most of southern Somalia. Today it does not. But while al-Shabab has lost its hold over significant territory, it has continued its military campaign in Somalia, and also has been able to carry out increasingly bloody operations in Kenya, at an escalating pace that is indicative of both strategy and ongoing vitality.

Rather than interpreting the Garissa attack as a sign of desperation from a dying organization, it must be seen as part of the organization’s evolving strategy. Al-Shabab has been weakened in real ways, but unfortunately Garissa does not appear to be the group’s dying gasp.