Snap Poll: Do Iran Sanctions Matter When It Comes to Stability in the Middle East?

We asked scholars if they think the Iran nuke deal will help save Mideast relationships or put them on the rocks.

When the news came out on April 2 that an initial agreement on scaling down Iran’s nuclear capabilities was likely, there was some degree of surprise because negotiations had seemed stalled. In the aftermath of the announcement and in the days that followed, one of the major questions to emerge was, what impact will the recent deal between the P5+1 and Iran have on stability in the Middle East? The Teaching, Research, and International Policy (TRIP) project at William & Mary, in collaboration with Foreign Policy, recently posed this question to international relations (IR) scholars and found a strong consensus — 7 to 1 — that the recent deal will have a positive impact on regional stability. On other aspects of the deal, such as whether the United States could have achieved more with stronger sanctions, or whether Iran would restart its nuclear weapons program if the next U.S. president were to withdraw from the agreement, scholars ranged from drastically divided to tightly unified in their views.

This poll, the fifth in our series, includes responses from 921 of all 4,169 IR scholars at colleges and universities throughout the United States. The poll opened at midnight EST on April 6 and closed at 11:59 p.m. PST on April 7. (See here for complete results.)

How will the deal impact regional stability?

After all the buildup and speculation about whether or not a deal to constrain Iran’s nuclear program was even feasible, we asked scholars if the proposed deal would affect stability in the Middle East. It turns out that the wide majority feel it would. When asked whether the proposed agreement would have a positive, negative, or no impact on regional stability, 70 percent of scholars said the deal would have a positive impact on Middle East stability. Of those who think the deal will lead to greater stability in the region, most (about 63 percent) cited the decreased likelihood that other states in the region will pursue nuclear weapons (nuclear proliferation). If they are correct, the deal will avoid triggering exactly the nuclear arms race predicted by opponents of the deal, such as Israeli Prime Minister Benjamin Netanyahu. 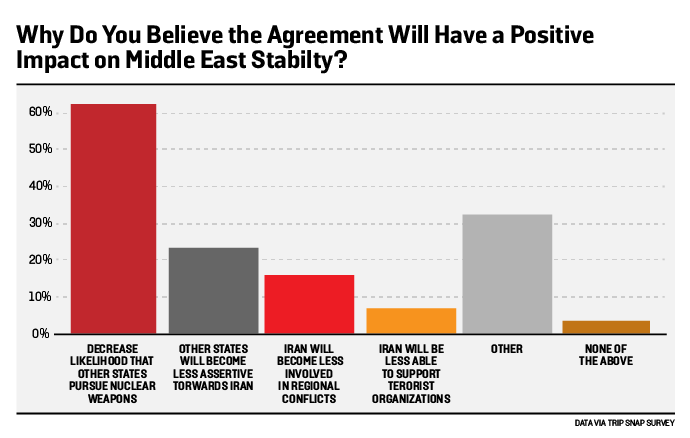 Out of all the scholars who responded, only 10 percent think the deal will have a negative impact on stability in the region. The scholars who are pessimistic about prospects for regional stability share Netanyahu’s concerns about nuclear proliferation, and more than half believe that because of the deal, Iran would be better positioned to support terrorist organizations.

The prevailing wisdom among IR scholars is that the deal between the P5+1 and Iran will have a positive impact on regional stability — a view that is corroborated by Middle East experts. When we looked at the responses of those self-identified scholars of the Middle East specifically, we saw that they agree with their colleagues; in fact, they were slightly more likely (70.6 percent) than their peers (68.4 percent) to say that the deal would have a positive impact on stability in the region. 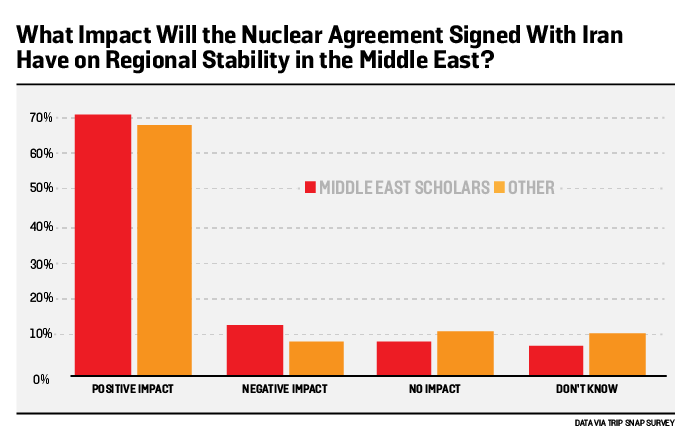 Will Iran comply with the deal?

As the negotiation period neared its conclusion, it appeared that Iran would scuttle the deal over provisions requiring the shipment of spent nuclear fuel out of the country. When we asked scholars with which of the major provisions in the deal Iran would fully comply, 64 percent said they believe Iran will allow access for International Atomic Energy Agency inspectors and limit uranium enrichment, but only 43 percent said they believe that Iran will follow through on its commitment to ship spent nuclear fuel out of the country. Just 10 percent of scholars said that Iran would not comply with any of the major provisions of the agreement. 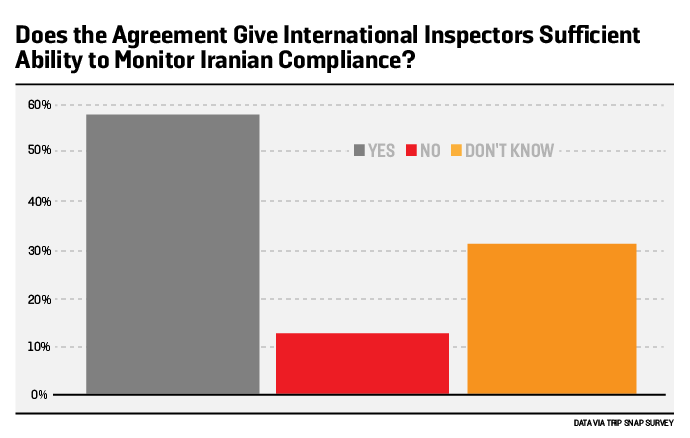 Could the United States have gotten a better deal by ratcheting up the pressure with more sanctions?

Before a deal was even struck, the Obama administration was on the defensive against Senate and House Republicans threatening to stick Iran with stronger sanctions. Secretary of State John Kerry warned Congress that such a move could undermine negotiations. Others have argued that a clearer threat of additional sanctions could have gotten Iran to make even larger concessions. We asked scholars whether Iran would still have agreed to the deal if there had been the threat of stronger sanctions should negotiations collapse. About half of our respondents believe that threatening to increase sanctions would have caused Iran to reject the framework, with about 17 percent saying that more pressure would not have torpedoed the talks and a large subset, about 35 percent, uncertain. Interestingly, of the 17 percent who believe Iran would have signed a deal if Obama had dialed up the threat of sanctions, less than a third (about 28 percent) think this would have resulted in Iran making more concessions. This suggests that only a small minority of scholars believe a strategy involving the threat of increased sanctions would have yielded better results for the United States. 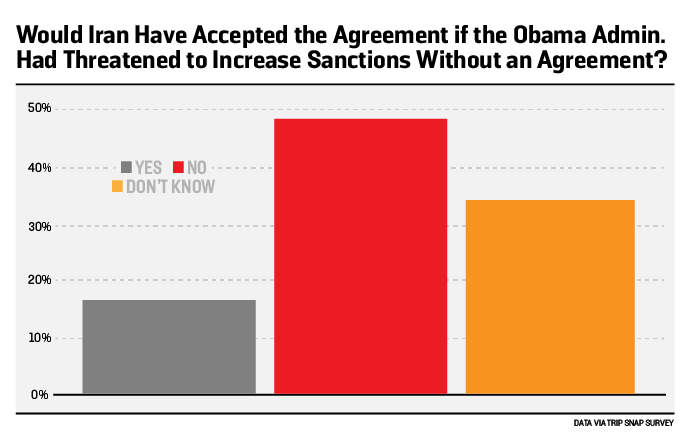 Will the deal stick?

In the days following the nuclear deal, some potential GOP presidential candidates vowed to unilaterally withdraw from the deal if elected, arguing that it is not in the United States’ interest. We asked scholars whether Iran would renew its nuclear weapons program if a future U.S. president unilaterally withdrew from the deal. Scholars spoke in near consensus, with 85 percent responding that such a move would increase the likelihood that Iran would restart its nuclear program. 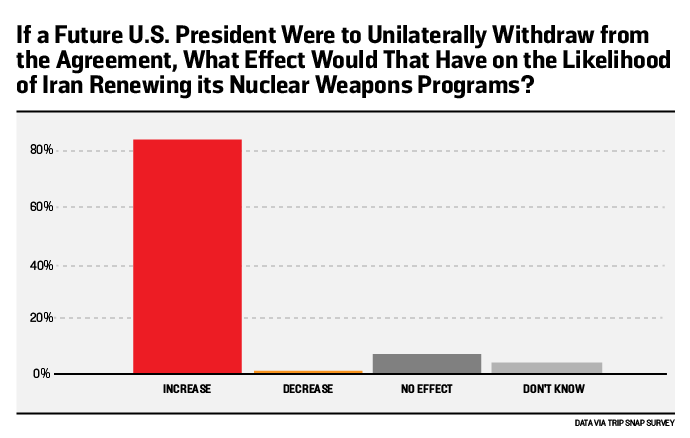 TRIP Snap Polls are conducted with the support of the Carnegie Corporation of New York.

Michael C. Horowitz is a professor of political science and the author of The Diffusion of Military Power: Causes and Consequences for International Politics. Twitter: @mchorowitz