The Obama administration's explicit policy is to capture suspected terrorists, not drone them. So why is there so much droning and so little capturing?

The New York Times published an important article on Monday, April 13, by Mark Mazzetti and Eric Schmidt that explores an important question regarding U.S. counterterrorism policy: Is it better policy to simply kill suspected terrorists with drones, or to attempt to capture them with U.S. special operations forces in order to collect intelligence from the detained individuals?

Mazzetti and Schmidt’s article reviews specifically the Obama administration’s decision to work with Pakistan to capture U.S. citizen Mohanad Mahmoud Al Farekh, who, according to an unsealed Justice Department complaint, traveled to Pakistan in 2007 to provide material support to al Qaeda. The decision to capture Farekh was made even though “[d]rones spotted him several times in the early months of 2013” and both the Pentagon and CIA sought to have him placed on a kill list so he could be lawfully targeted.

The capture of Farekh and his eventual transfer to the United States for trial is notable because it is one of the rare occasions when U.S. counterterrorism practice aligned with stated U.S. policy objectives. Since September 2011, the Obama administration has repeatedly and strenuously claimed that it always prefers capturing suspected terrorists rather than killing them. This was first put forth by then-senior White House counterterrorism advisor John Brennan at a Harvard Law School speech entitled “Strengthening our Security by Adhering to our Values and Laws.” In it, Brennan stated:

Some have suggested that we do not have a detention policy; that we prefer to kill suspected terrorists, rather than capture them. This is absurd, and I want to take this opportunity to set the record straight. As a former career intelligence professional, I have a profound appreciation for the value of intelligence. Intelligence disrupts terrorist plots and thwarts attacks. Intelligence saves lives. And one of our greatest sources of intelligence about [al Qaeda], its plans, and its intentions has been the members of its network who have been taken into custody by the United States and our partners overseas.

So I want to be very clear — whenever it is possible to capture a suspected terrorist, it is the unqualified preference of the Administration to take custody of that individual so we can obtain information that is vital to the safety and security of the American people…. [I]t is the clear and unambiguous policy of this Administration.

For a policy that is supposedly the “unqualified preference” and is “clear and unambiguous,” there is little evidence that it is actually guiding counterterrorism operations. Since Brennan first made this proclamation — later formalized in President Barack Obama’s May 2013 National Defense University speech and corresponding presidential policy guidance — the United States has conducted an estimated 215 drone strikes, which have killed 1,271 individuals (see graph below).

It is difficult to know with any certainty how many suspected capture operations have been authorized and conducted since then, but I am told it is fewer than a dozen or so, with the reported cases being in Libya in October 2013 and June 2014, Somalia in October 2013, and perhaps the Philippines in January 2015. In none of these operations was a single U.S. service member killed, and it is believed that only two resulted in the successful capture of the targeted militant. There are assuredly other capture operations, which Brennan alluded to last month, that we will never know about; nor in these cases will the United States ever receive credit for adhering to its professed values and laws. 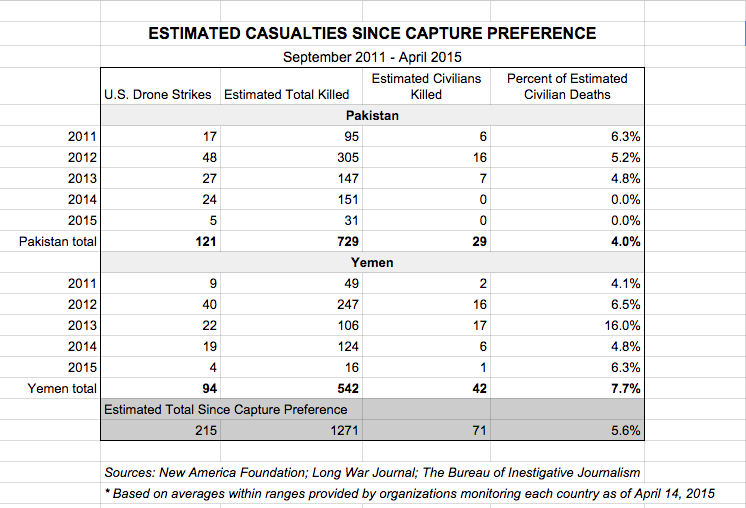 Click to see a larger version of this chart

That relatively few counterterrorism capture operations have been attempted in comparison to drone strikes suggests that whatever unique intelligence these suspected terrorists hold is not particularly valuable or timely. If that information was key to saving the lives of U.S. citizens, then surely it would be worth placing U.S. special forces’ lives at some degree of risk, or potentially upsetting bilateral relations with the government where the individuals reside. However, these suspected terrorists are being killed continuously at a safe distance with little apparent regard for or interest in retrieving the intelligence that they possess. This also suggests that they are overwhelmingly neither “high-value” terrorists nor engaged in ongoing plots against the United States or U.S. citizens living abroad.

It is useful to remember that capturing terrorists to extract intelligence was once the norm in U.S. counterterrorism strategy. As the State Department’s Patterns of Global Terrorism: 2002 report reads: “In January, the Government of Pakistan arrested and transferred to U.S. custody nearly 500 suspected al-Qaida and Taliban terrorists.” And that’s just Pakistan. In December 2002, CIA Director George Tenet stated: “Since September 2001, more than 3,000 al-Qaida operatives or associates have been detained in over 100 countries.” From there, they entered the CIA’s “black sites,” undeclared Pentagon detention facilities, and Guantánamo Bay.

As the Senate Select Committee on Intelligence report on the CIA’s detention and interrogation program later determined, some of these detained individuals were not involved with al Qaeda or the Taliban, were held for too long, and were even tortured. One of the most critical unresolved post-9/11 dilemmas is whether the United States overwhelmingly ended capture operations and resorted to drone strikes because of the ugly legacy of torture. This is the central premise of Mazzetti’s book, The Way of the Knife. As he described in a 2013 New York Times article, the 2004 Office of Inspector General report “kicked out the foundation upon which the C.I.A. detention and interrogation program had rested. It was perhaps the single most important reason for the C.I.A.’s shift from capturing to killing terrorism suspects.” Retired agency officials have told me this is too simple an explanation and that they were simply executing White House guidance.

Nevertheless, it is undeniable that the United States shifted markedly from capture to kill in George W. Bush’s second term. Moreover, this habit has been expanded markedly under President Obama’s watch. Whereas Bush authorized an estimated 50 drone strikes while in office, there have been 470 under Obama, which have killed an estimated 3,300 suspected terrorists and militants. We can never know what information they held, and whether it would have been useful to better understanding the tactics, techniques, and procedures of terrorist organizations or would have revealed any external plotting. All we know is that they — and several hundred civilians along with them — are dead.

President Obama could reverse this practice if he was willing to approve the assumption of some risks and consequences for U.S. service members. In my conversations with a significant number of active-duty and retired officials and planners in the special operations community, they repeatedly emphasize the belief that they can execute capture missions at little risk to themselves or noncombatants, and they enthusiastically wish that the opportunity to conduct such missions were more forthcoming. They are better trained, equipped, and prepared to do this than any specialized military units in the history of the world.

That Obama will not authorize them to do so is explained by the unmatched attraction of drones when compared to all other weapons platforms or to special operations missions. The threshold for approving a suspected terrorist’s death at no risk is far lower than assuming any degree of risk to capture them. For anyone to suggest otherwise based upon the lethal precedent that has been established by the Obama administration is absurd.