Memories of Vietnam: Fighting alongside a well-led unit of Vietnamese Rangers

When Americans thinks of the Vietnam War, they tend to reflect only what our troops did. 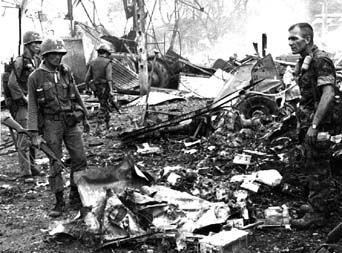 When Americans thinks of the Vietnam War, they tend to reflect only what our troops did. The actions and activities of the Vietnamese military itself is largely forgotten which is unfair to the whole. The vast majority of the fighting was performed by Vietnamese troops supported by a large U.S. advisory effort bringing our resources to them. Thousands of U.S. military served as advisors from all Services to all Services. The Vietnamese units ranged from very good to very bad-not unlike our own. When we consider that they had been fighting since 1954, the varying quality and emotional exhaustion is understandable compared to our own.

Many of these units were consistently superb and were to the final end in 1975. The U.S. advisory effort was important to their success, but not the only reason for it. Their efforts, qualities and actions went largely unreported in the media as they were not American units. But, they were our units. This narrative addresses one of those units that both benefited and grew with U.S. military support at an obscure piece of jungle at a small area known as Suoi Long.

The Spring of 1967 in III Corps was a transition year for the VC and NVA. They were on the cusp of moving into conventional warfare from their guerilla roots and had not encountered serious setbacks in the region to this point. That changed for one unit and its advisory elements in June with a single major battle fought between the 52nd Vietnamese Ranger Battalion and a Main Force VC element in excess of two regiments, 23-24 June, along the Dong Nai River.

The Dong Nai River is a large roiling black body that winds its way through what was labeled War Zone D. About 15 kilometers north of Xuan Loc, the provincial capital of Long Kanh and a major throughway to Saigon from the East, the river bisects solid double and triple canopy jungle, previously a sanctuary for the many transiting VC and NVA units as they moved south and west toward the more populated Saigon-Di An-Tay Ninh population centers.

Temporarily assigned to the local ARVN Division, the 18th-rated the worst in the army-was one of the best elements in the army-the 52nd Ranger Battalion already holding a U.S. Presidential Unit Citation for earlier relieving an element of the U.S. 11th Armored Cavalry Regiment and destined to win a second for their actions on the Dong Nai.

The Battalion Commander was Maj Nguyen Hiep (since killed in a re-education camp)  His counterpart was Captain Al Shine, the Senior Advisor.  I was assigned to Captain Tot, the Executive Officer and had as my NCO SFC Swyers, a Ranger NCO with considerable Korean War experience.  We each had a radio operator-mine was nicknamed “Elephant” due to his huge size-even by U.S. standards.  At six feet, three inches myself, “blending into the unit” was not an option despite the best advice of the Saigon in-country instruction.

The role of an advisor in such as unit as the Rangers was pretty clear. Our task was to coordinate all the U.S. assets available to bring them to bear on behalf of the Rangers. U.S. artillery, aerial gunships and lift helicopters, tactical air, naval gunfire and maneuver units as well as medevac were the daily advisor tasks. Very little was expected in the way in advice as our counterparts were far more experienced and combat competent than we were.

The 52nd was organized along standard U.S. Army lines with four rifle companies and a Headquarters Company.  Each rifle company had approximately 80-90 personnel.  The total battalion strength on the LZ the day of this action was approximately 450.  The primary armaments were the antiquated M1 carbine, BAR, .30 Cal M1919 Light MG and M79 grenade launcher.  The soldiers were primarily the social outcasts of Vietnamese society.  The officers were predominately ethnic North Vietnamese who had fled south at the demarcation in 1954.  All would be described as fatalists who fully expected to die fighting the communists and had no expectations of living out the war.  Through continuous experience, they were exceptionally proficient disciplined combat soldiers.  In garrison, they were usually less than quality citizens.  They had no use for their government or their very senior National leadership. They lived to kill and expected to be killed.

I had joined the 52d BDQ at Xuan Loc basecamp, or Ranger Hill as it was known by us, in April of 1967 as a 1st Lt, Deputy Senior Advisor.  From the perspective of the occupants of the MAVC compound, it might as well have been Siberia.  They were primarily responsible for the 18th ARVN Division and the Province forces and we had few cordial relations or mutual interests.  The feeling was mutual between the Rangers and their Vietnamese counterparts in Xuan Loc.  Both elements had a decidedly hostile attitude toward each other.  The Rangers had no regard for the 18th based on past poor performance and clear non-interest in field operations. The Commanding General viewed the attachment of the 52nd as a gift to hide his own unit’s lack of operations and kept the 52d in the field as often as possible.

Two weeks prior to joining the battalion, the 52nd had successfully broken a major VC ambush of the 11th ACR along Highway QL 20, North and West of Xuan Loc.  From then on, the 11th ACR habitually asked for the Rangers which became their light infantry.  This was a great relationship because the Rangers knew in their hearts if they got in trouble, the Cav would always move mountains to get to them and would provide the artillery and air support that could be expected had they been American troops.  This provided a huge boost of confidence and   was a major cause for the very aggressive combat actions of the battalion.  This feeling was a crucial part of the Ranger psyche as the battle unfolded.

On a field operation in mid-May, the Rangers were laagered in an area known as the Chinese Farms when a Cav helicopter landed.  It was Col Cobb, the 11th ACR Regimental Commander, who presented Maj Hiep and our senior advisor, Captain Al Shine, with two brand new M60 machine guns, the only ones the Rangers had.  Hiep gave them to the best machine gunners in the battalion-two Montagnards with gold front teeth, both of which smoked a small pipe.  I shall never forget the image over my right shoulder of one of those gunners at Suoi Long calmly working off 3 round bursts with the pipe in his mouth as if he were at a Ft Benning gunnery range.  The gunner keyed on the sound of the VC commanders blowing whistles and on more than one occasion I heard the whistle abruptly ingested as the M60 rounds impacted.  These two guns plus the very few M16’s in the battalion were to have a decisive early effect at Suoi Long.  (Hiep and Tot’s bodyguards and myself as well as some other soldiers had M16’s.  Months after the battle, we were told that at the initial contact, the VC commander believed we were a new regiment as he hadn’t heard Vietnamese with M16’s before-reportedly this caused him to be more cautious with us than he otherwise might have been). But that was later.

On the 22d of June, the 52d BDQ was on rest at Ranger Hill after almost a month in the field.  Normally, we could expect one or two week’s rest before going back to the field.  However, on this day, three days after stand down, Cpt Shine was called to MAVC compound and briefed on an immediate operation for the 52d.  The 18th Div CG, who exercised tactical control of the 52d, told Hiep that a VC “deserter” had told the Intelligence Officer (G2-Phong Nhi), that he had been part of a construction unit that was building a company size basecamp along the Dong Nai River to receive a new VC unit.  Hiep’s mission was to take the deserter the next day, the 23d, find the basecamp and destroy it.  We would conduct an air assault with U.S. helicopters and be reinforced by the 11th ACR and possibly the 48th Regiment of the 18th.  However, we were told that probably no reinforcements would be needed.

The concept, discussed with the advisors and unit subordinates was that the Battalion, once inserted, would form into two columns for movement in the jungle.  One half of the battalion and the deserter would move with Hiep and the other with myself and Captain Tot. Both elements would move parallel about 100 meters apart. Cpt Shine and “Elephant,” the US RTO, would move with Hiep, I and SFC Swyers, would move with the XO, Cpt Tot. The knowledge that SFC Swyers was Korean War veteran gave me a needed shot of confidence, as this was my first real combat operation.  During the action, Swyers was very cool and his experience came through helping hold the Rangers together and organizing our constantly changing defense.

We were trucked to the pickup zone, which was very hot and exposed.  Accompanying us was the 52nd Vietnamese Reconnaissance Company-no organizational elation.  They were armed with M1 Garand rifles.  The Rangers assembled the following morning in the edge of Don Dien Michelin rubber plantation and waited for the helicopters.  Eventually, around 1500, they began to arrive in mass.  Soon, more than 40 UHIH’s arrived from all over III Corps, including the Kiwi’s from the New Zealand unit at Nui Dat.  I had never seen so many lift ships before. By 1600, we were loaded on the helicopters waiting for the air strikes and artillery. Sitting on the birds, we were in the direct sunlight, the heat was stifling and the rotor blades were churning dust and diesel fuel over us. We were all exhausted, physically and mentally, by the time the birds lifted off.

The fresh air was a relief once aloft and we could see immediately where we were going.  Artillery was exploding in the small clearing in the middle of a dense jungle expanse that went to the horizon as far as one could see with the just the dark slash of the Dong Nai slightly to the north to break the solid green. Tactical air strikes were underway and helicopter gunships could be seen hanging on the periphery ducking in an out between strikes to make gun runs. The Dong Nai River, Nui Ba Den Mountain and the vast expanse of War Zone D created the vision of a giant IMAX movie screen.  The adrenalin kicked in.

Thomas E. Ricks covered the U.S. military from 1991 to 2008 for the Wall Street Journal and then the Washington Post. He can be reached at ricksblogcomment@gmail.com. Twitter: @tomricks1
View
Comments
Tags: Military, War