On the road with the small group of volunteers supplying Ukraine’s embattled soldiers with everything from Snickers bars to Kevlar vests. 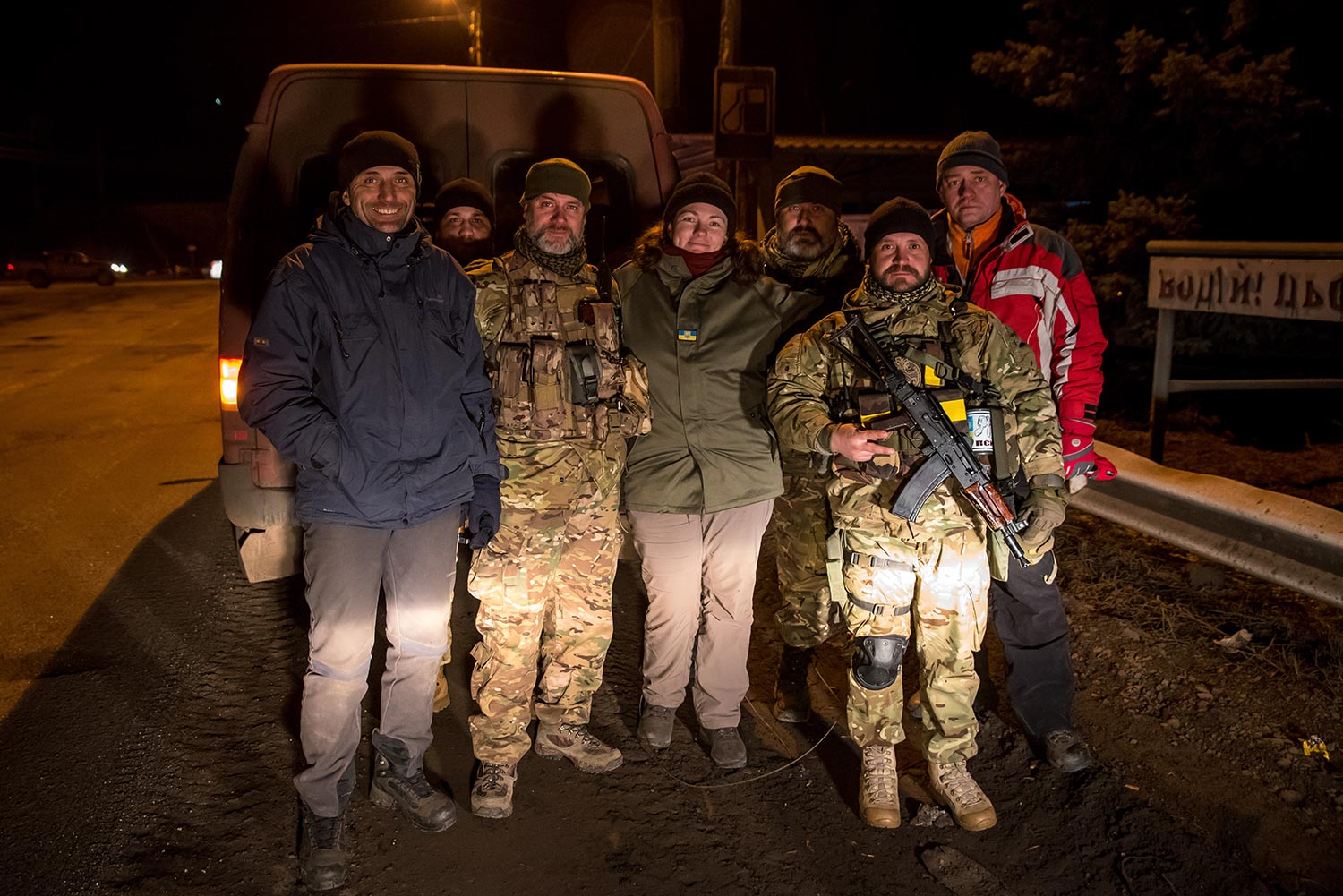 At 4 a.m., two Ford Transit vans barrel down an otherwise empty road on their way to a military camp at an undisclosed location in the Donbass region of Ukraine. The temperature is a brutal negative 13 degrees and with no working heat, the vans’ passengers are bundled in sleeping bags, as they have been all through the night. Just 10 hours earlier, the vehicles were parked at a loading dock in Kiev, being stuffed to the brim with medical supplies, body armor, and cartons of Dannon yogurt.

“They do not have any fresh milk products in their ration,” says Anna Sandalova. “That’s why [the soldiers] are really happy to have fresh yogurts on a checkpoint.”

Sandalova, a 39-year-old Kiev native and mother of two who used to work for FIFA, is the head of a volunteer organization called Help the Army of Ukraine, a Facebook-based group that has raised over $1 million from people all over the world in order to buy medical aid and supplies for Ukrainian military units fighting in eastern Ukraine. On this particular three-day expedition in February, the group would be distributing goods worth about 421,000 Ukrainian hryvnia (according to the exchange rate at the time, roughly $17,000).

I joined Sandalova and three others on this particular trip, which would, over the course of two days, traverse some 1,000 miles. But for these volunteers (posing with Anna above), the journey is standard fare. Every two weeks, the organization — which has been operating exclusively on donations since the end of the Euromaidan demonstrations in Kiev — travels to front-line positions where Ukraine’s fighting men need aid the most. 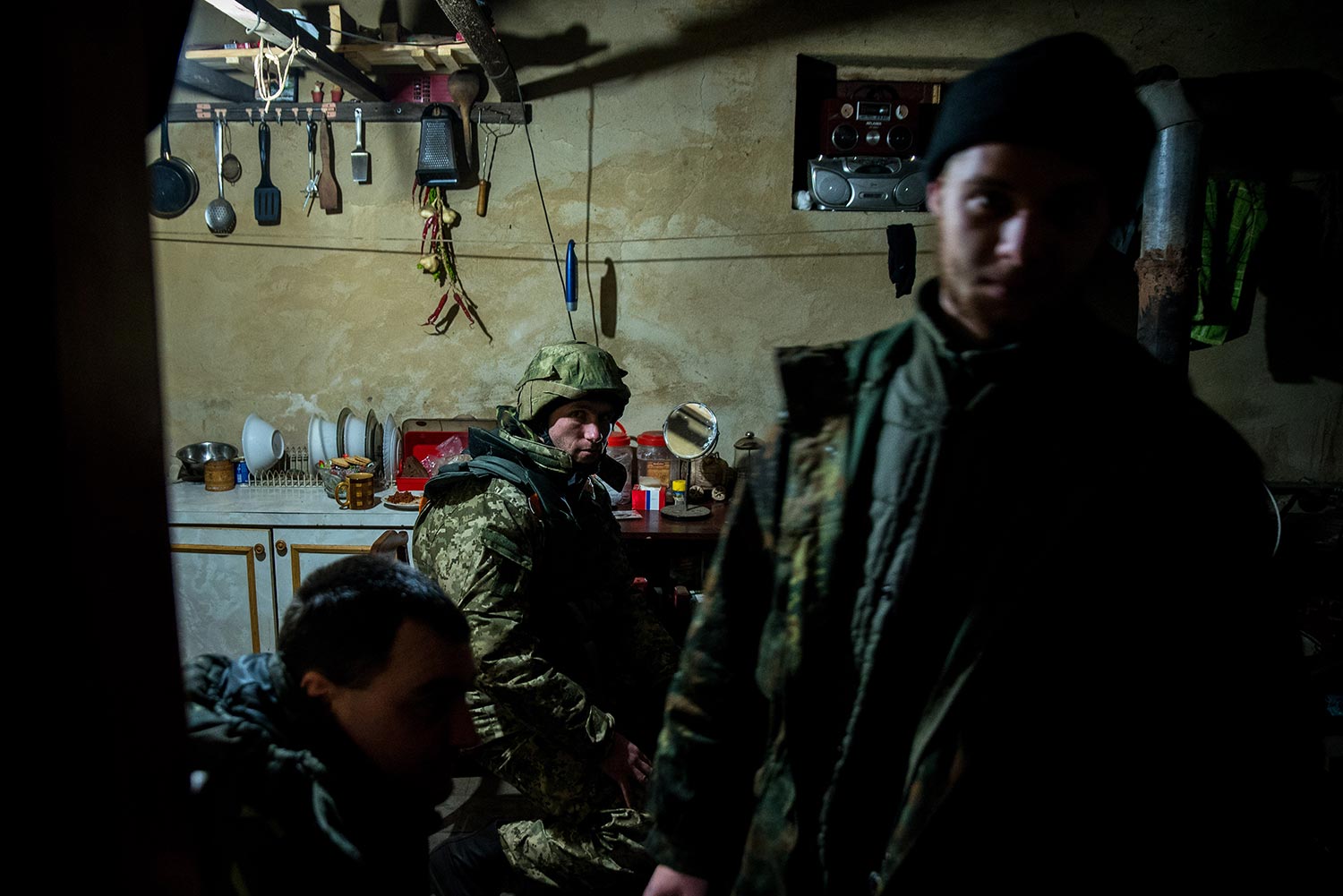 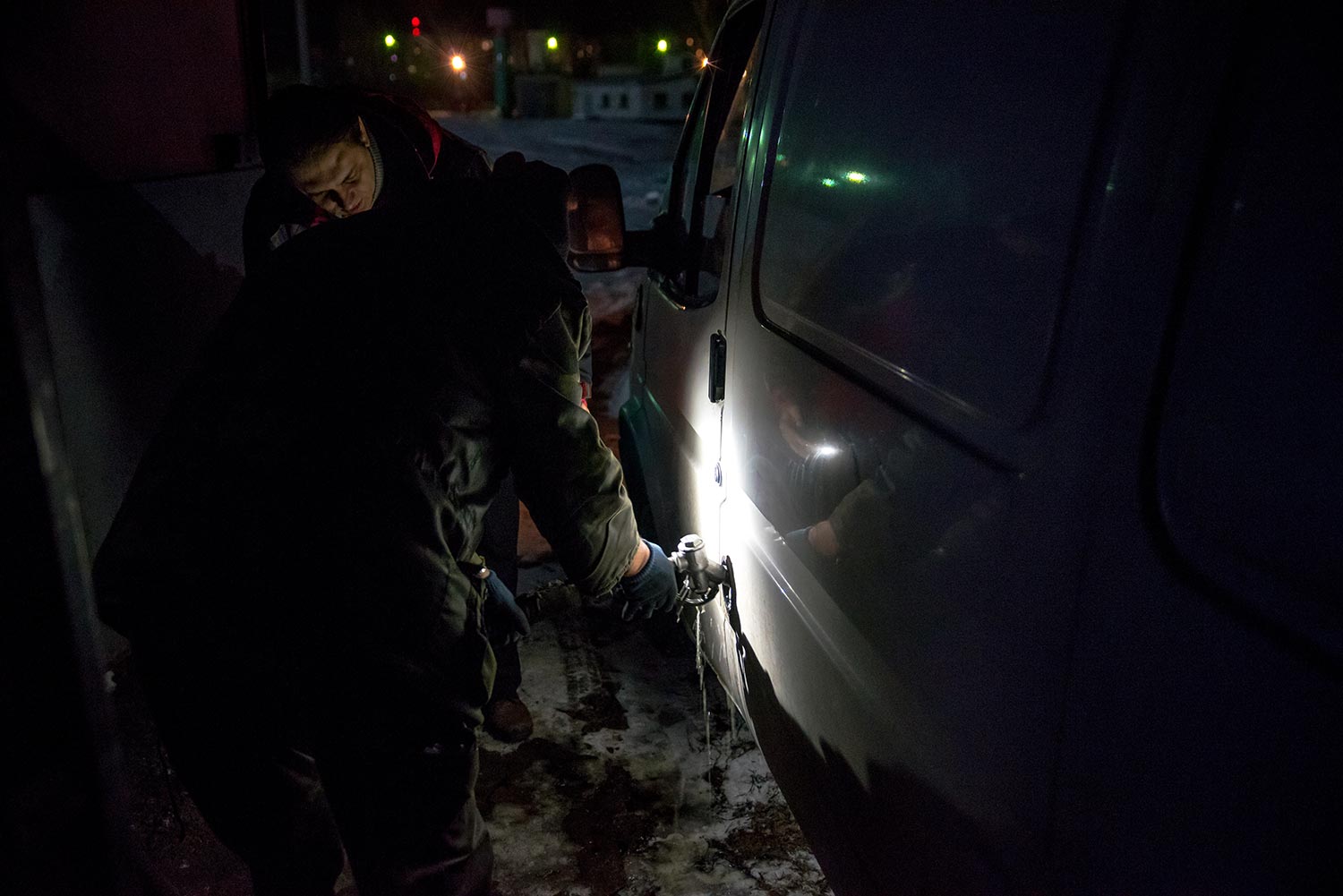 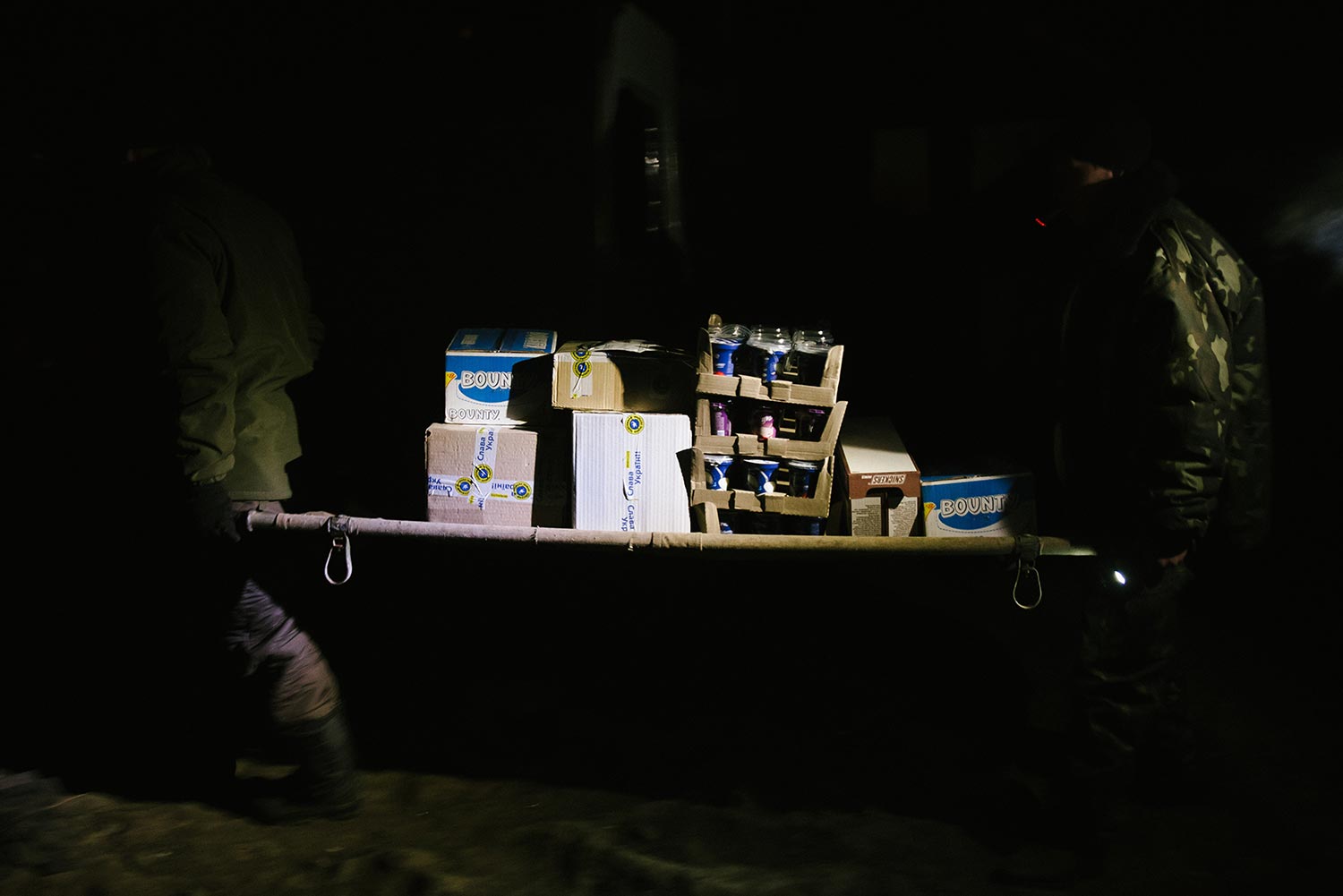 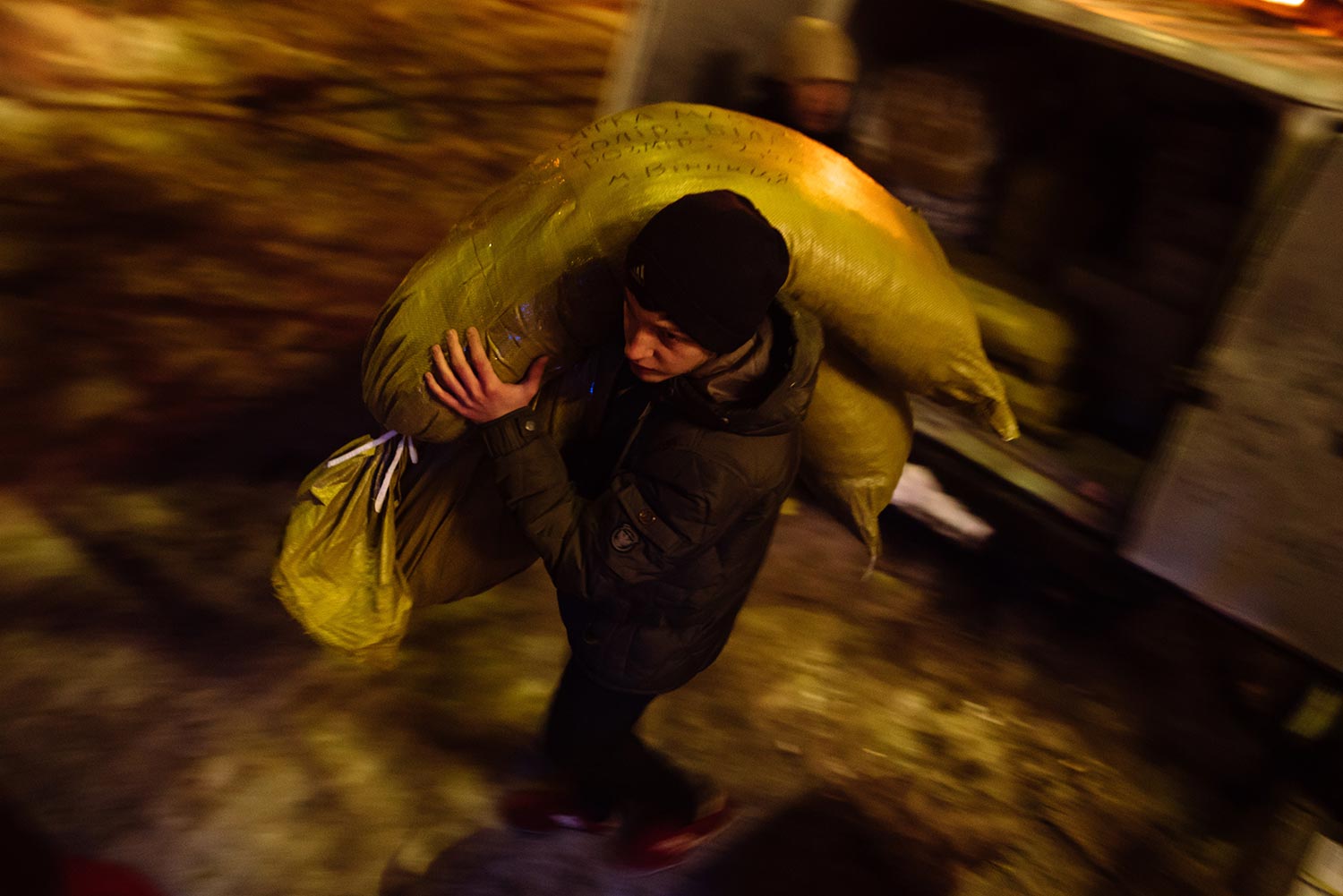 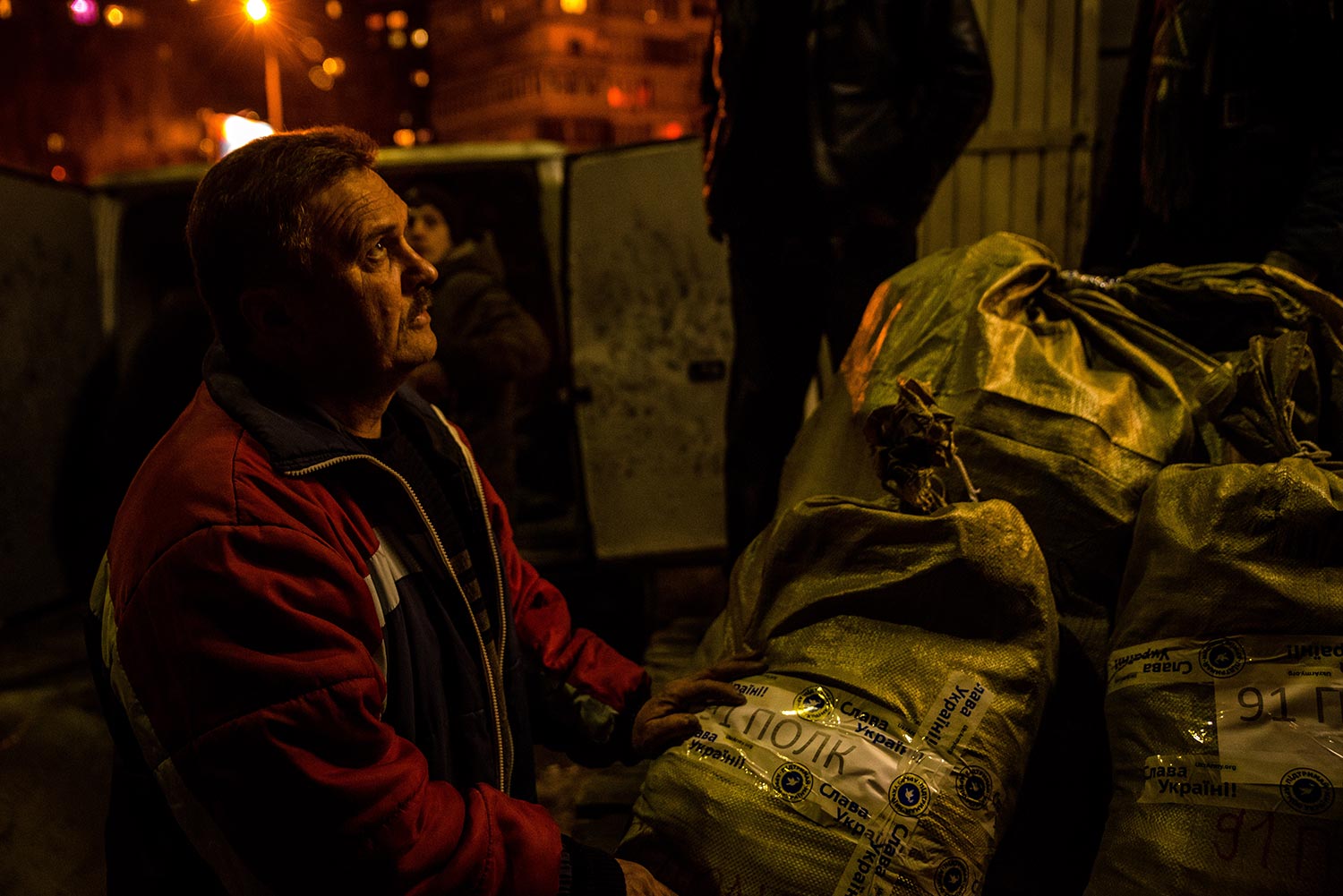 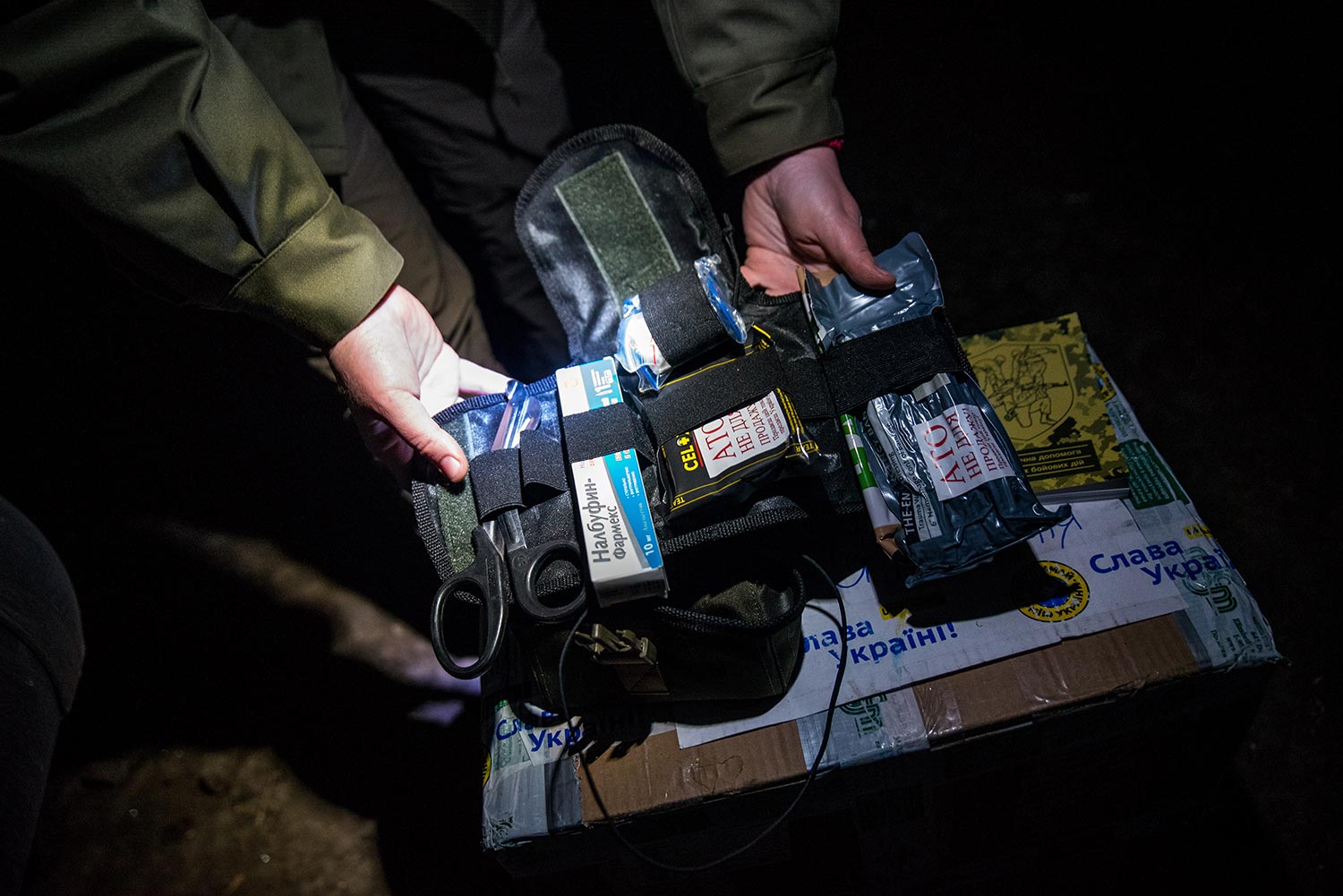 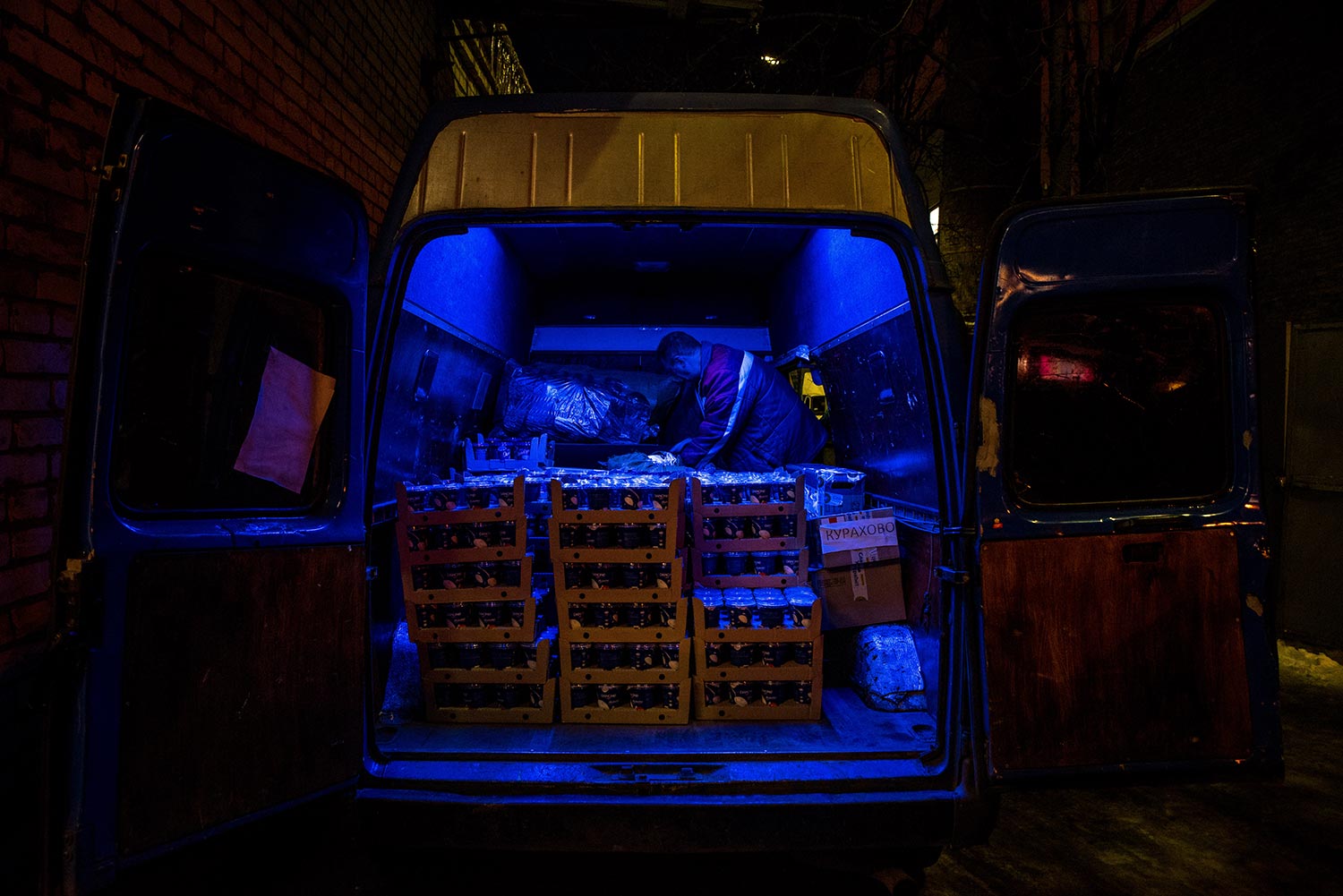 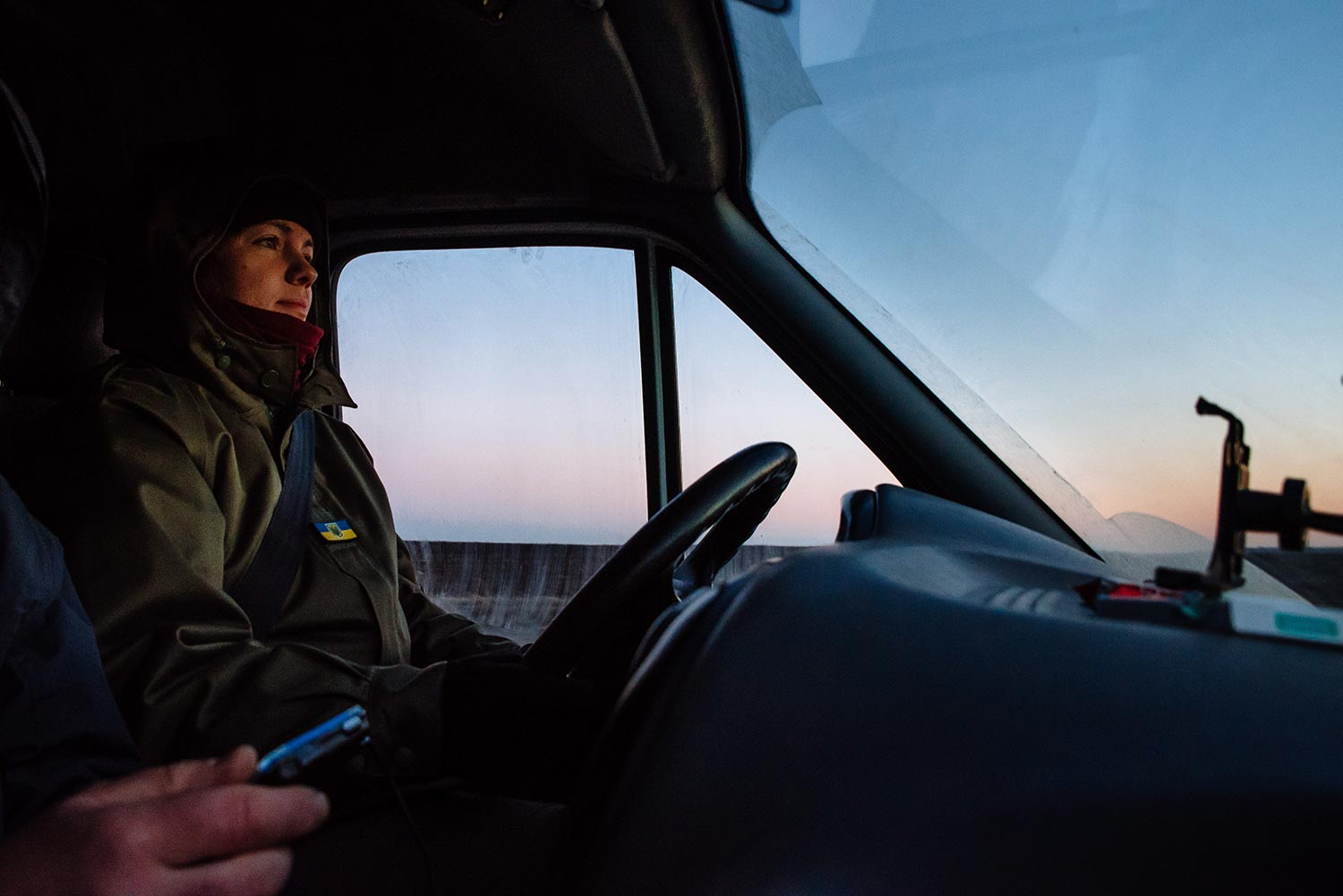 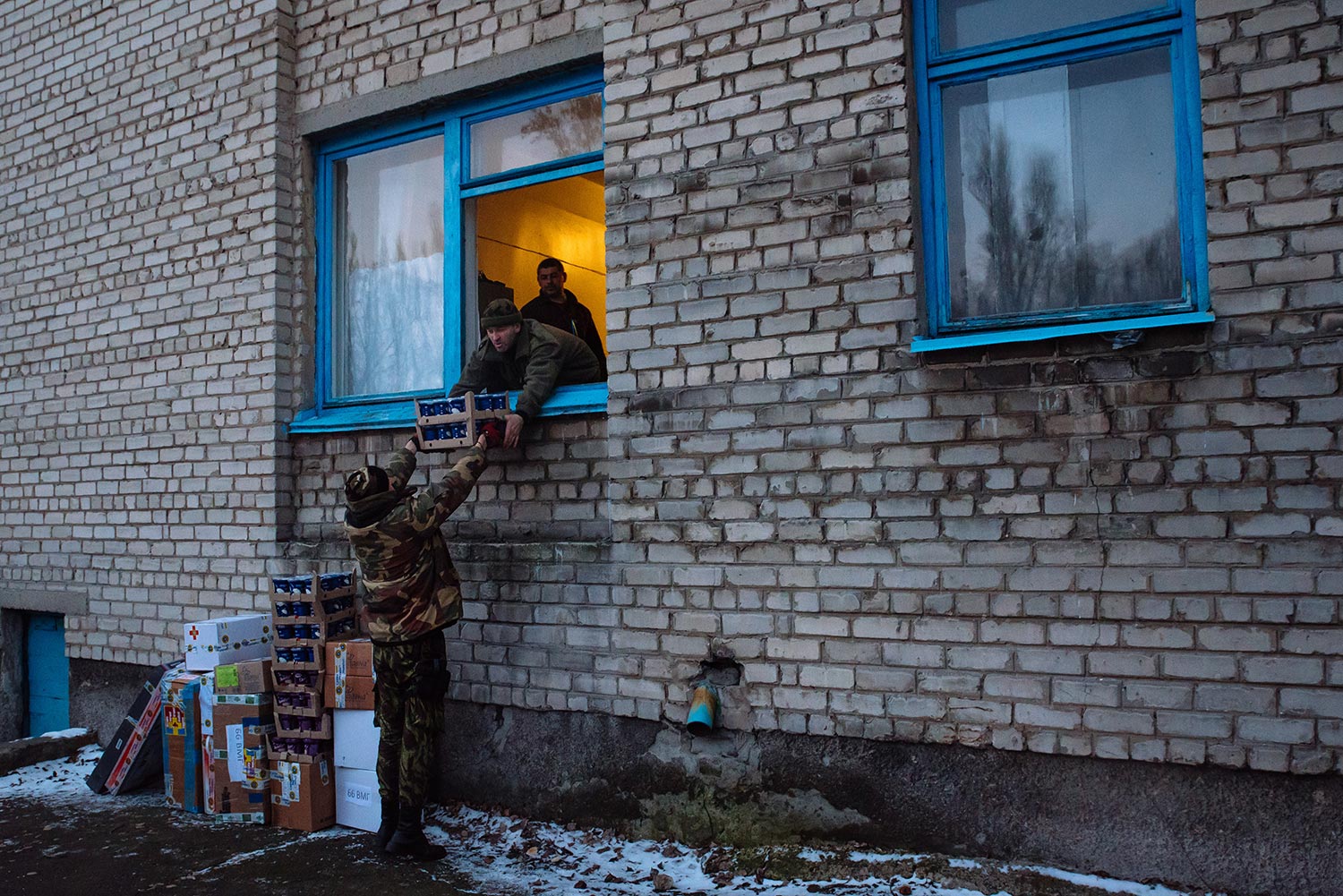 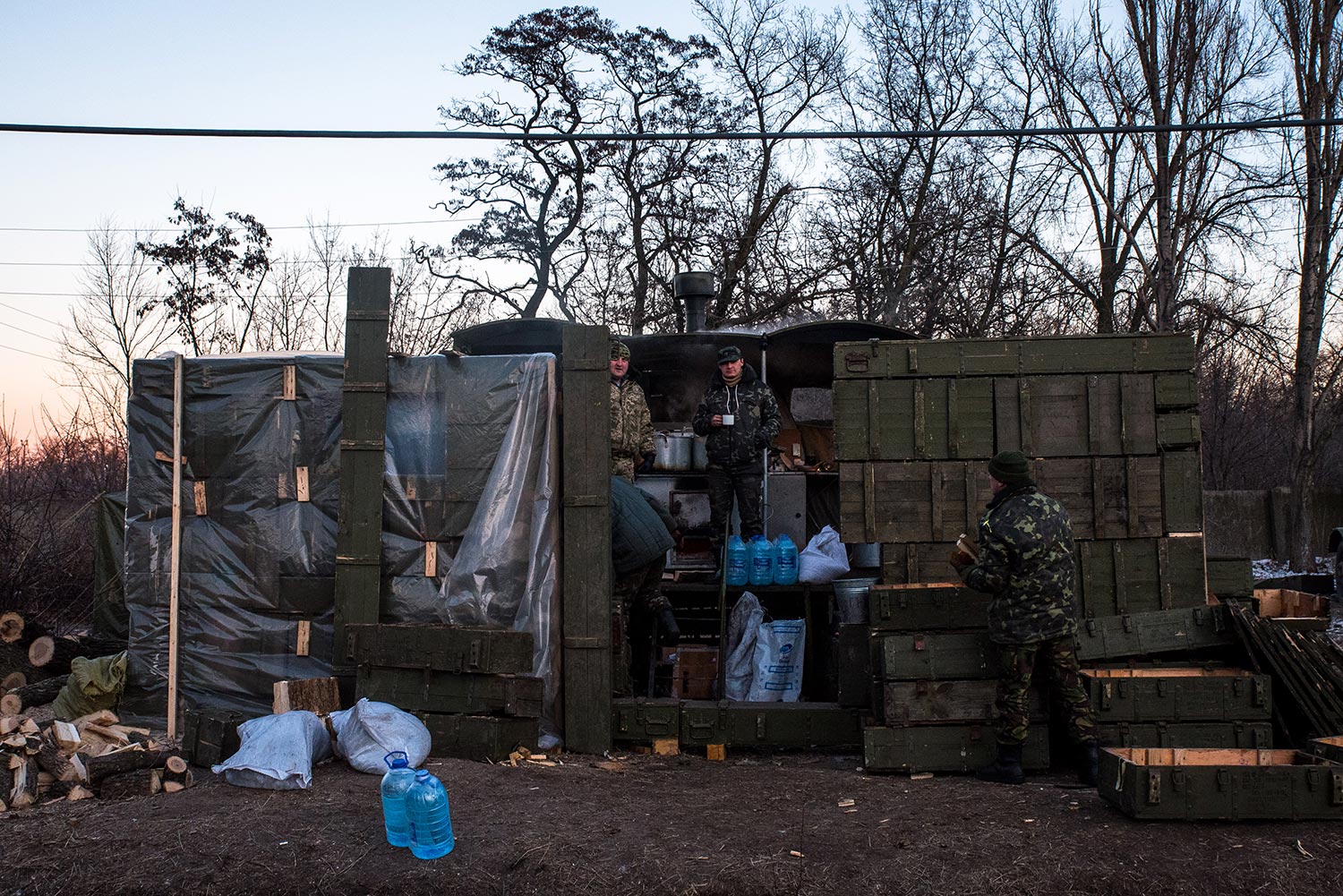 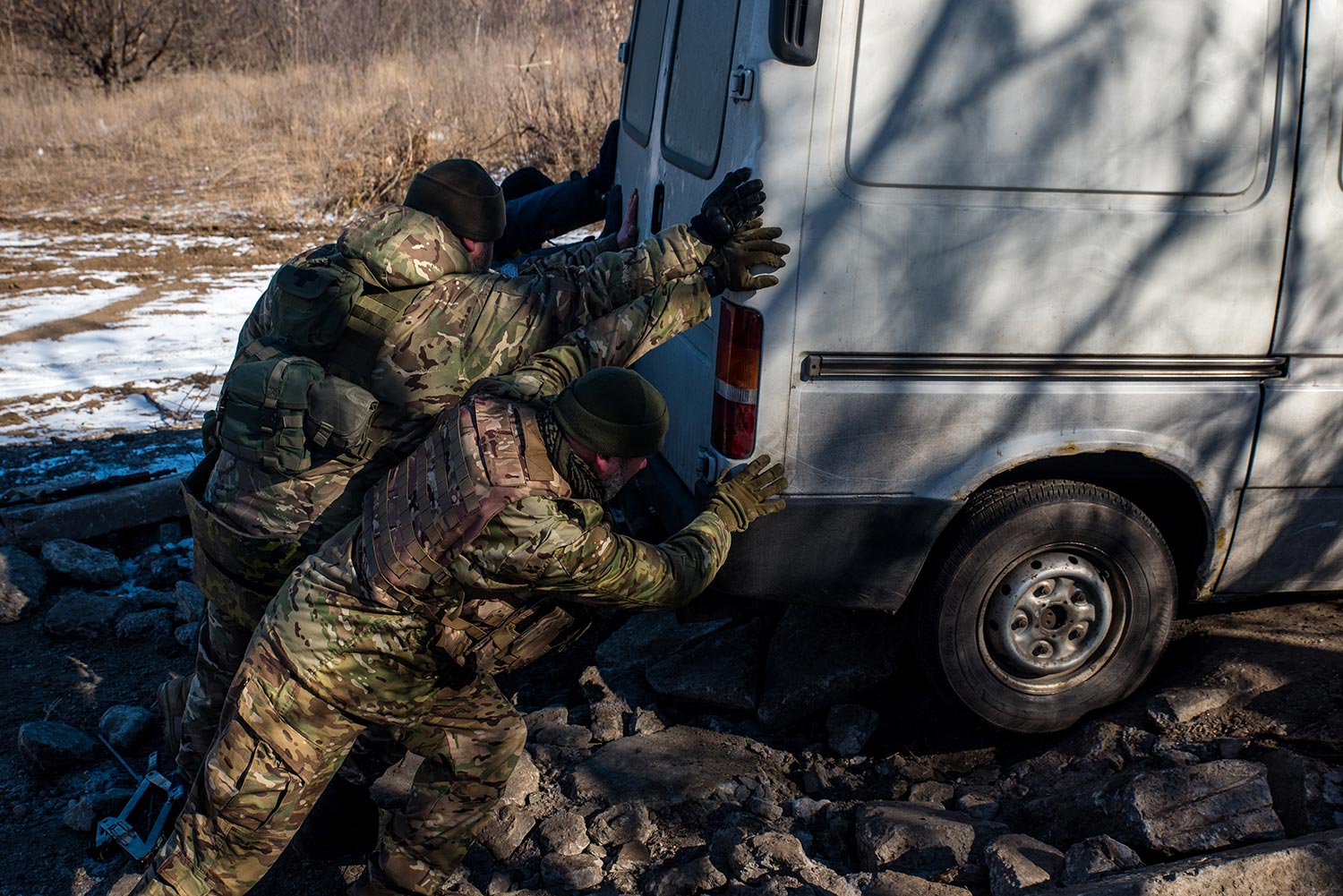 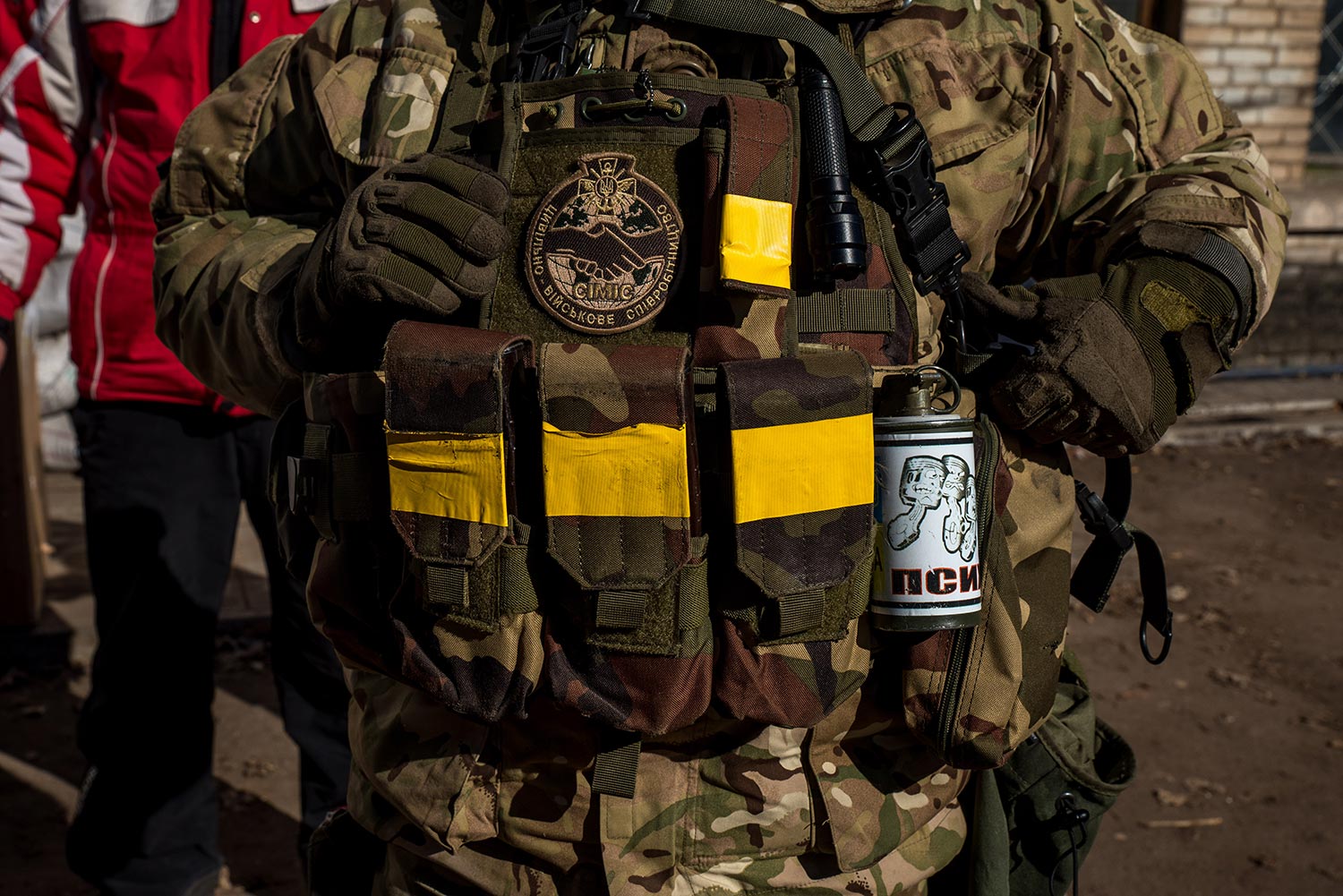 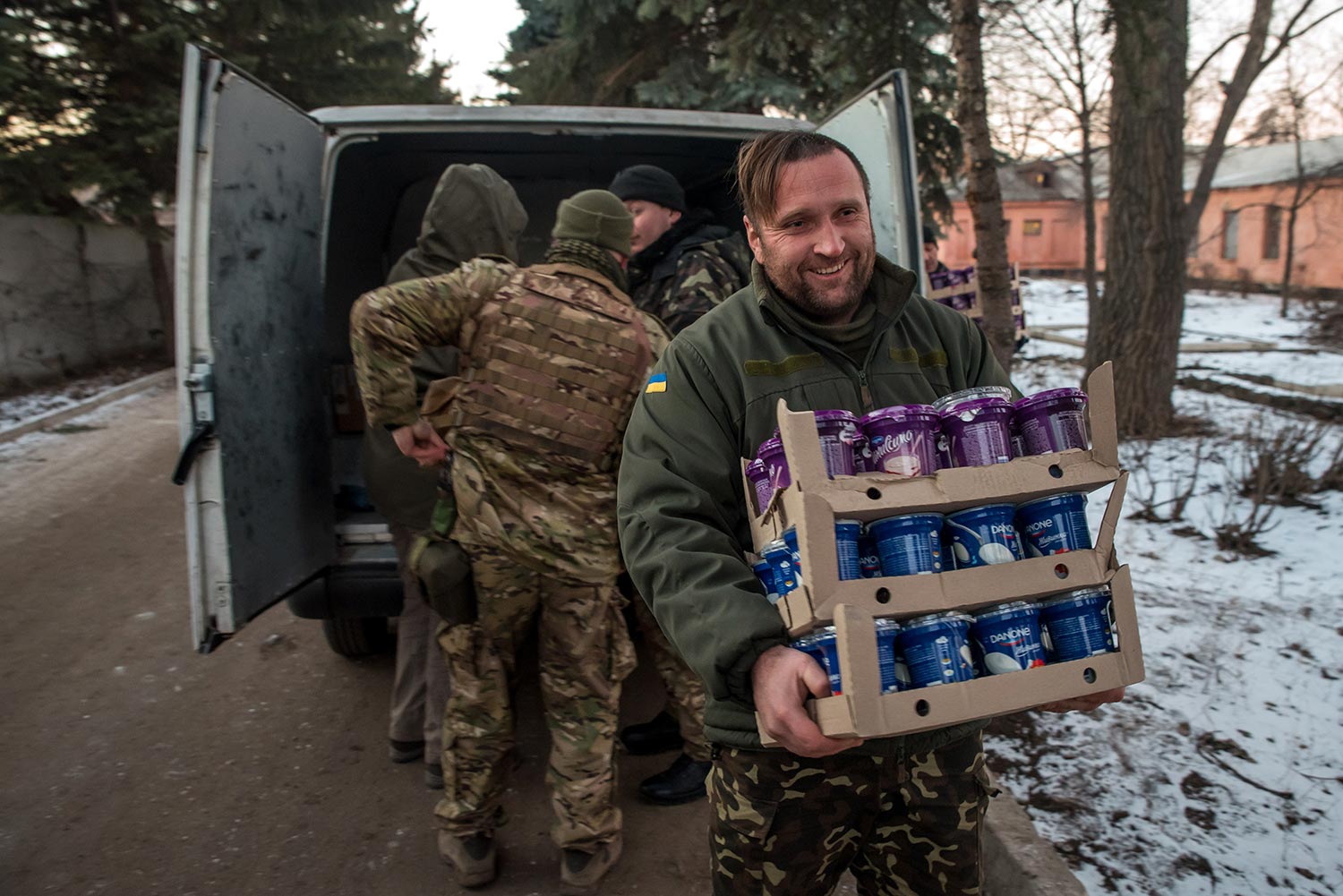 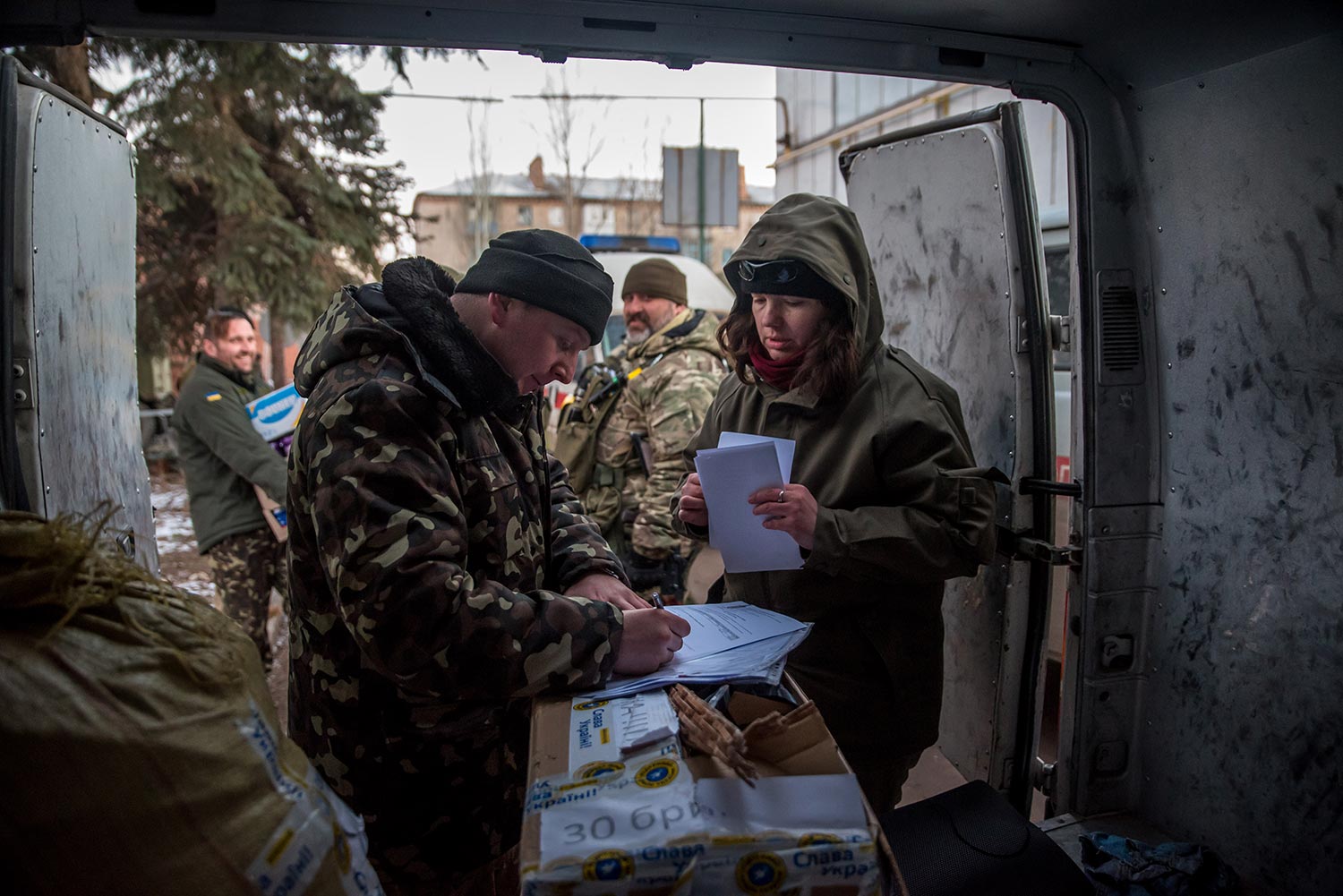 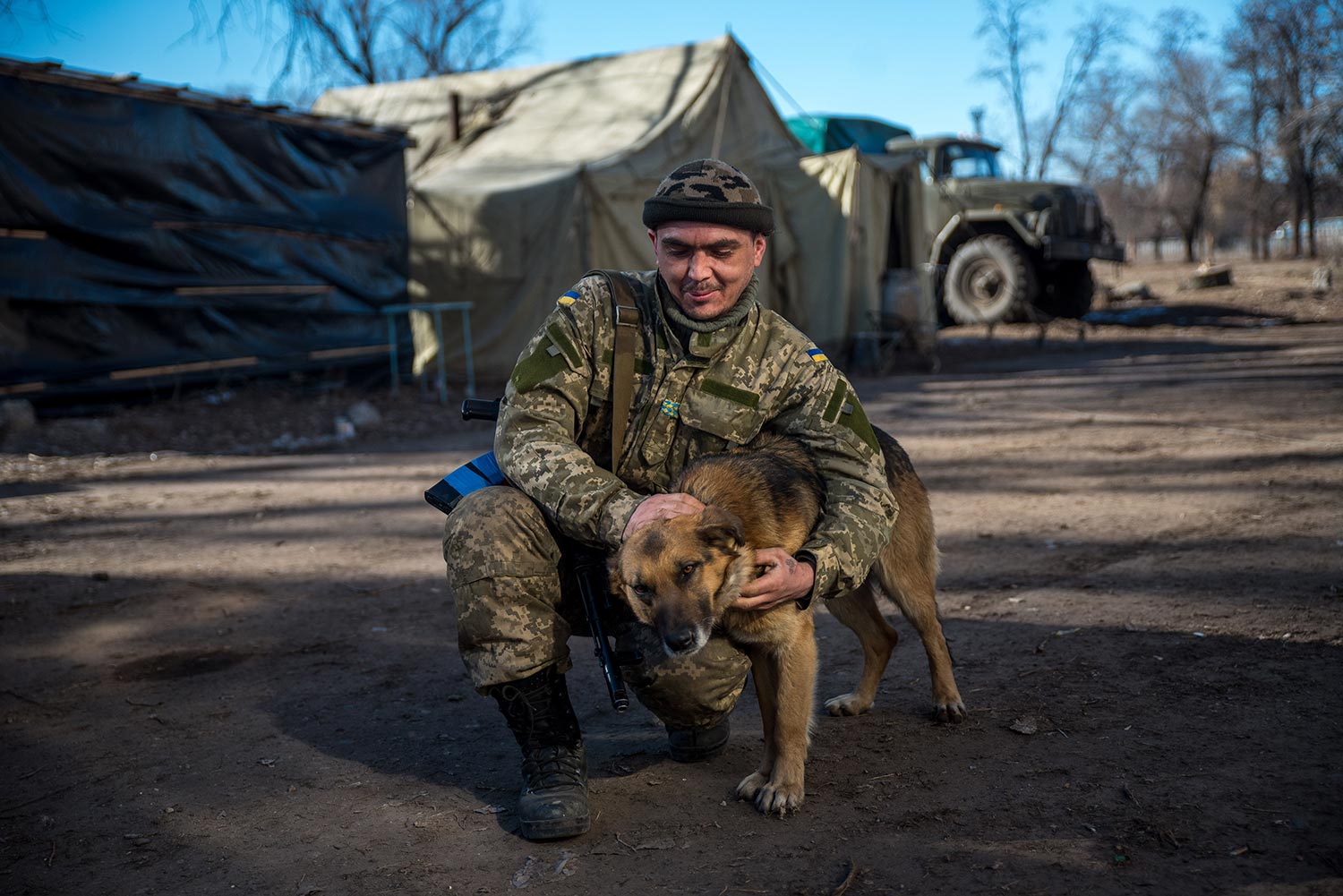 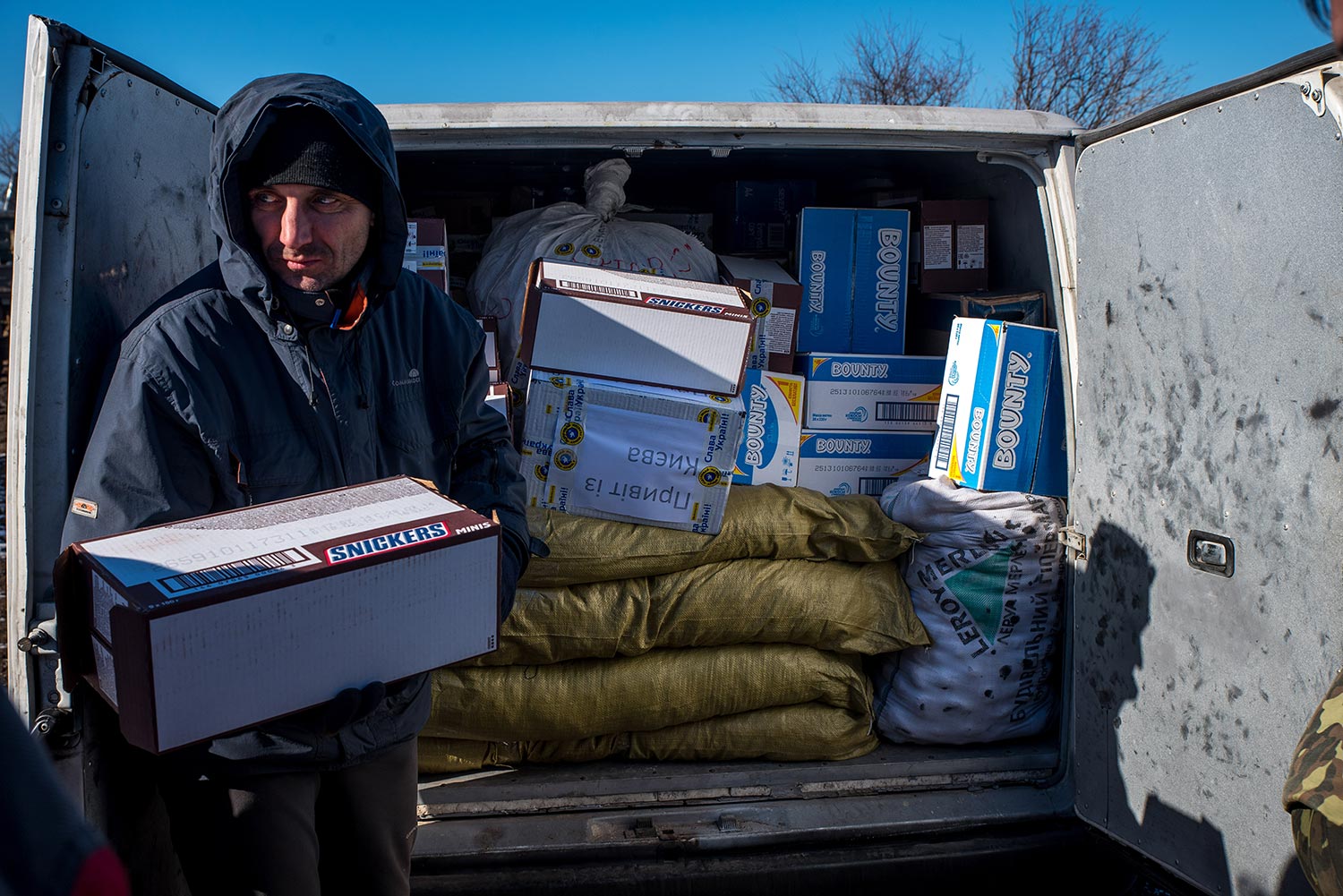 The basement barracks of soldiers stationed in Krasnohorivka, only a few miles from pro-Russian separatist positions.

Help the Army of Ukraine volunteers gas up at a military base just outside Kiev before heading out on their all-night journey to the war zone. All of their gas is provided via a private donor.

Ukrainian soldiers carry their donations on a stretcher at a military vehicle depot at an undisclosed location somewhere near the front-line town of Dzerzhynsk in Donetsk oblast.

A volunteer from Help the Army of Ukraine carries a sack of military uniforms from one van to another at the organization’s facility in Kiev.

A volunteer awaits directions before loading sacks of boots and uniforms in one of the two vans that will be making the long journey to the front in a few hours.

A standard emergency medical kit supplied to Ukrainian soldiers by the Help the Army of Ukraine aid group.

Crates of Dannon yogurt fill up half a van.

Help the Army of Ukraine founder Anna Sandalova on her way to deliver goods to the front line.

Ukrainian soldiers pass supplies — ranging from medical supplies to space heaters — through a window into a military hospital near Krasnoarmeysk.

A field kitchen made out of empty ammo crates at a military hospital near Krasnoarmeysk.

Members of the Civilian Military Cooperation Unit (CIMIC) help push one of the vans carrying aid over a berm after it got stuck.

The “kit” of one of the members of the Civilian Military Cooperation Unit (CIMIC).

Soldiers offload supplies at a military base at Artemivsk.

Sandalova makes sure all proof-of-delivery documents are signed before handing over supplies.

A Ukrainian soldier and aid recipient spends some quality time with one of the base’s adopted stray dogs.

Sandalova’s brother Dima offloads supplies at a base near Kurakhove after an all-night drive from Kiev.

The first stop after the sub-zero, all-night drive is at an engineering battalion tucked away in the woods near the town of Kurakhove. Upon our arrival, a crowd of battle-weary but eager soldiers meets the vans. The exchange has the feeling of Christmas Day, and the gifts include new uniforms, a generator, and spare truck parts. After filling out the appropriate paperwork (which Sandalova has the recipients sign in order to show donors that their supplies have been received) Sandalova, her brother Dima, and two longtime family friends hop back in the vans to make their way to the town of Krasnohorivka, which is only about a mile from Russian-backed separatist positions. Along the way, they stop at the three checkpoints we pass to drop off crates of yogurt.

In the light of day, the devastating hit Krasnohorivka has taken from the months of fighting is plain. The roads are pocked with bomb craters and the buildings' exteriors are scarred by shrapnel. Most of the residents have fled this formerly quiet little town on the outskirts of Donetsk, and Ukrainian soldiers constitute the bulk of its population. The unit of soldiers receiving aid from Sandalova that day had taken up residence in the musty basement of a partially destroyed home.

When the boxes of kneepads, winter uniforms, and medical kits are offloaded, a sunken-eyed young soldier offers Sandalova a tour of the front-line positions. The ground is littered with spent 30 mm shell casings and discarded rocket-launcher tubes. Using a pair of binoculars — which were provided by the volunteers on a previous visit — the soldier points to an outcropping of buildings on the other side of a field. This is where their enemy lives. He directs Sandalova to keep her head down to avoid attracting a sniper’s attention.

Before we leave, the soldiers give Sandalova the disfigured steel cylinder of a Grad rocket that landed near their position. She promises to keep it in her office as a reminder to the volunteers back in Kiev of what the soldiers endure.

After 24 hours on the road, two hospital visits, and over a half-dozen other checkpoint yogurt drops, and after the sun has disappeared below the horizon, the weary volunteers pull into a Slovyansk hotel. The next morning, the volunteers are greeted at the hotel by a group of five bearded and heavily armed men from the Ukrainian military’s Civilian-Military Cooperation Unit (CIMIC) who serve as liaisons between the government and volunteer aid groups. They will escort the group through the area near Debaltseve, which was captured that very morning by pro-Russian separatists. There are countless checkpoints and at each one we pass, Sandalova’s crew again pulls over to dispense boxes of Snickers and yogurt.

While Help the Army of Ukraine has raised an impressive amount of money, the organization’s bank account has ebbed and flowed with the tides of fighting. When the fighting waned after the fall of Debaltseve, so too did donations. “People in Kiev have forgotten and even for us, for volunteers to collect now, it’s hard,” Sandalova told me during an April phone call seven weeks after our trip. Before, she said it was easy to rely on a steadier stream of donations — all she had to do was post a note on Facebook. Now, she says even with a post about how “this very important individual needs binoculars, I [will get] like 50 hryvnia ($2). I think that when it’s calm people don’t feel that they have to support the army.”

But that may soon change. Front-line positions next to the Donetsk airport and Shyrokyne, east of the port city of Mariupol, have seen a dramatic uptick in violence in the past few days. The Ukrainian government reported that six of its soldiers were killed in a 24-hour period this week and an April 12 OSCE spot report said that its observers recorded over 1,000 explosions around the Donetsk airport within a few hours. In the organization’s assessment, “approximately 30 percent of the total number of explosions was caused by heavy artillery, tank and 120 mm mortar fire” — a violation of the Minsk II agreement.

On the February trip, we met Psyho (nom de guerre), a major in the CIMIC who spent some time training with the U.S. military, who talked about the value of the country’s volunteers, like Sandalova and her team. “Without the support they are provide us with, we could lost this war already,” he said in broken English.

He told us the story of an old woman in a village near Debaltseve who alerted his team to an ambush. Later, he says, they asked her why she helped them. “She told [us] that no one care about her, only the military and volunteers.”

His soldiers had given the woman some of their medical aid — supplies that had been given to them by volunteers. And that’s why she decided to inform us, Psyho said.

All photos by James Sprankle