What goes through a Chinese web user’s head the moment before he or she hits the “publish” button? Pundits, scholars, and everyday netizens have spent years trying to parse the (ever-shifting) rules of the Chinese Internet. Although Chinese authorities have been putting ever more Internet rules and regulations on the books — one famously creates criminal liability for a “harmful” rumor shared more than 500 times — the line between what’s allowed and what isn’t, and the consequences that flow from the latter, remains strategically fuzzy. And that’s just how Chinese authorities like it.

But a discerning observer can still sketch out the shadowy form of the (often unwritten) rules that govern the Chinese web. Before posting, a Chinese web user is likely to consider basic questions about how likely a post is to travel, whether it runs counter to government priorities, and whether it calls for action or is likely to engender it. Those answers help determine whether a post can be published without incident — as it is somewhere around 84 percent or 87 percent of the time — or is instead likely to lead to a spectrum of negative consequences varying from censorship, to the deletion of a user’s account, to his or her detention, even arrest and conviction. The flowchart below, based on my years following developments in Chinese cyberspace, provides a glimpse into the web of considerations that may determine the fate of a post — or its author. (Click image to enlarge.) 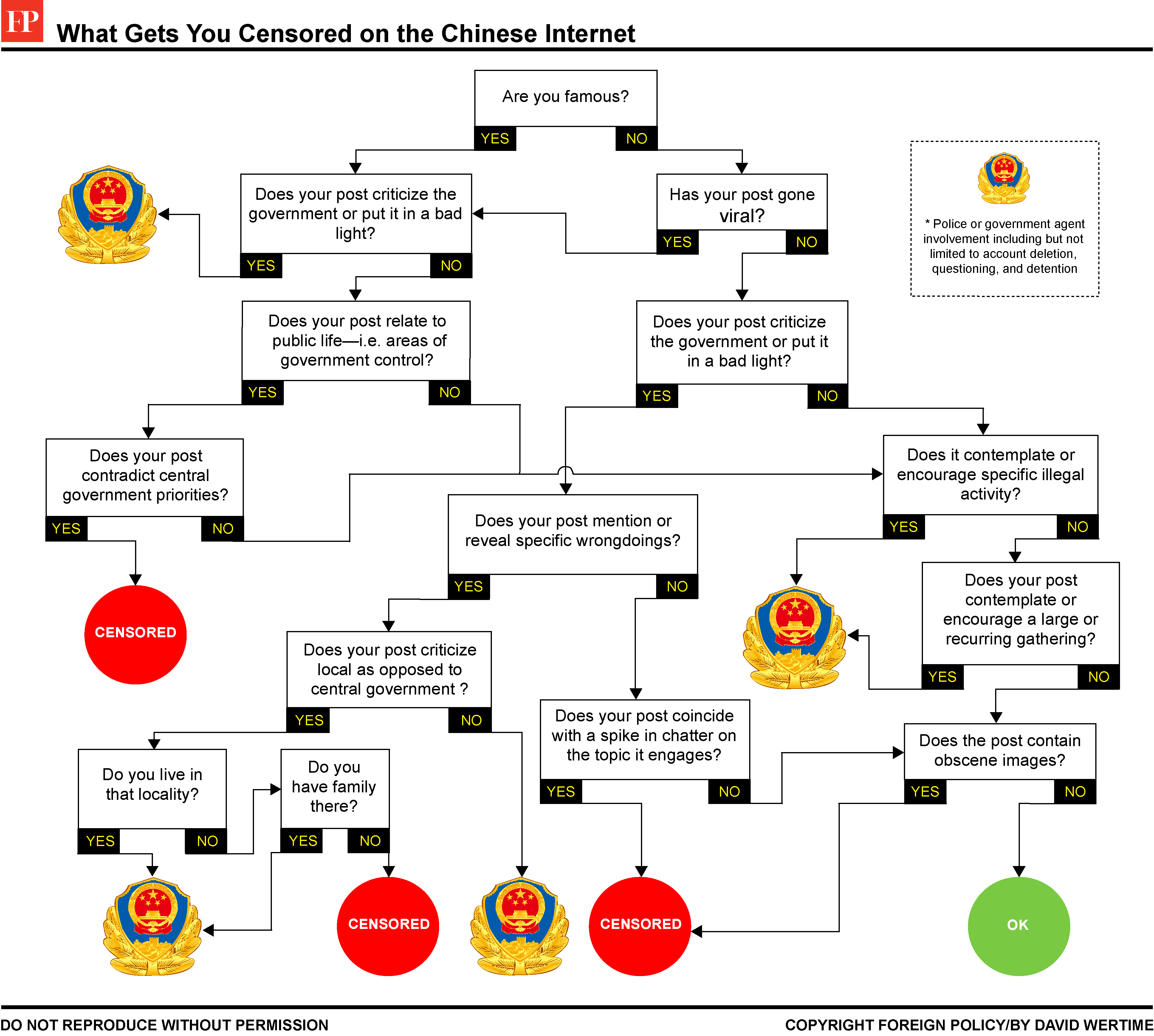 A few nodes on this chart merit particular explanation:

There is much, of course, the above graphic does not and cannot capture. A user, for example, may have a powerful backer that allows him or her to push the envelope — or conversely, a history of activism that makes any post suspect. And the consequences beyond censorship are too uncertain and multifarious to be visually represented.

It’s also worth emphasizing that most posts are left alone. But that’s only after each survives a gauntlet of possible pitfalls, managing not only to obey laws as written but also to avoid contravening the interests or sensibilities of the central government and relevant local officials. That’s led to endemic self-censorship, particularly when the topic hits at anything even approaching politics. In turn, that makes Chinese cyberspace less likely to host the kind of raucous (and, to the government, potentially destabilizing) national debates and movements that used to spring up without warning before authorities tightened the screws on online speech starting in late 2013. China’s web users now have a strong incentive to stick to entertainment and e-commerce, rather than using the web as a platform for speech and debate on the major issues shaping their country’s future.