‘Ashley’s War’: A look at the use of Cultural Support Teams in Afghanistan 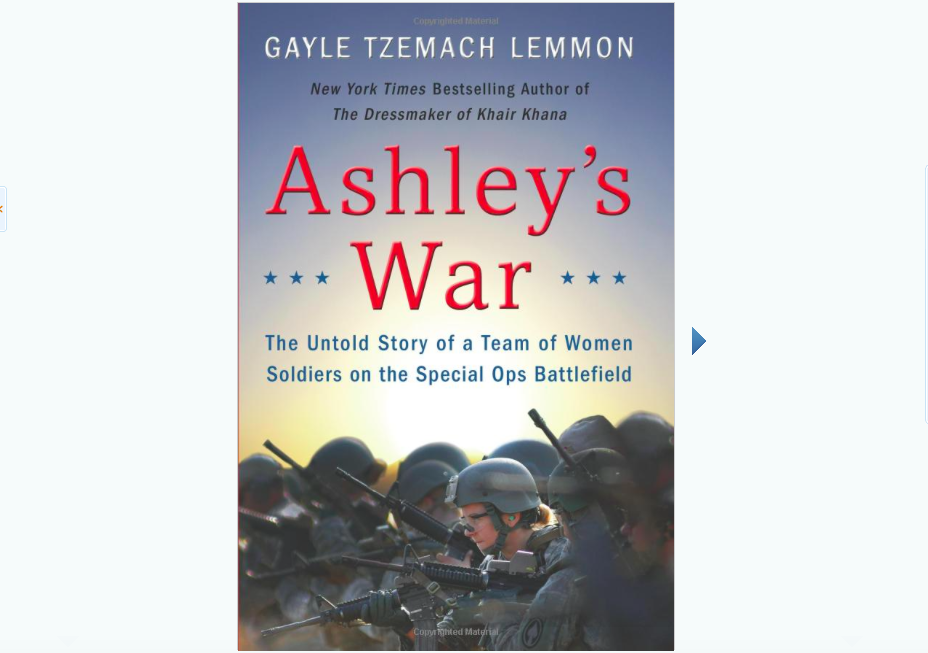 So the Cultural Support Teams (CSTs) of 2010 — the first all-female units assigned to special operations forces in Afghanistan and the subject of the new book Ashley’s War by Gayle Lemmon — were standing on the shoulders of giants. But their work was also truly groundbreaking, and in her fast-paced narrative, Lemmon gives us an inside view of one of the most prominent women-in-combat programs that the Pentagon has ever attempted. When Defense Secretary Leon Panetta’s announced in 2013 that women would be allowed in direct combat roles, it was the official acknowledgement of decades of precedent.

As the Army currently conducts a trial run of putting women through Ranger School, and as the Marine Corps tests integrated units at Twentynine Palms, most news and pundit chatter centers on whether women are as good as men. But Lemmon moves the story forward by asking a more relevant question. What do women do better than men? Or, to put it another way, in the context of male-dominated Afghan society, what are female American soldiers uniquely qualified to do?

In the late 2000s, as the war in Afghanistan dragged on, Admiral Eric Olson, General Stanley McChrystal, and Admiral William McRaven, all three special operations officers, had the same insight at about the same time: when their teams raided insurgent compounds, they were only able to collect intelligence from half of the population. The wives, mothers and sisters of the Taliban knew where the guns were hidden and who was fighting with which tribe, but no one was asking them. In an effort to respect local culture and tradition surrounding women, male American soldiers were being hoodwinked.

Their solution was to create a unit of female soldiers that could embed with the Rangers and SEALs doing the raids. They had to be fit enough to endure the physical punishment of fast-roping and ruck marches, but once on-scene, their primary job was to talk, not shoot their weapons. As the lead instructor of the eventual CST training course would put it: “You are CSTs and you have a very particular job to do on the battlefield. You have to de-escalate whatever situation you are drawn into, and engage with the women and children. But we are not at war to pass out blankets and hugs. I need you to find out where the bad guys are, as quick as you can.”

Various local U.S. commanders had had this idea before, and created units often known as Female Engagement Teams (FETs) to deal with the issue. Where implemented, the teams proved useful; Afghan women would speak to American women, and Afghan men saw American women as some third gender, not threatening, but also not governed by the rules that applied to female members of their family. But these FETs were ad hoc and unorganized, and the female soldiers thus assigned were often untrained for the job. An official program, complete with selection process, training pipeline, and explicit deployment to Afghanistan, did not exist until the CSTs were created by Special Operations Command in 2010.

Many of the volunteers for CST were combat veterans themselves, again putting to bed the lie that women were not already in the thick of the fighting. They came from across the Army: the executive officer of a combat engineer company, a former artillery platoon leader, military police. Some had already held jobs that officially were only open to men. First Lieutenant Ashley White, for whom the book is named, was a star athlete and member of the North Carolina National Guard.

Lemmon has done her homework, and while she occasionally drifts into thickets of jargon, for the most part she is a strong and capable guide. For non-military readers, Lemmon navigates the snake-eater bureaucracy, explains the difference between Special Forces and special operations forces, and can cite the only scene everyone loves out of the otherwise reviled film The Hurt Locker.

In post-9/11 military non-fiction, two standard formulas have become popular: Train-Fight-Triumph (No Easy Day), and Train-Fight-Tragedy (Lone Survivor). Sadly, Ashley’s War proves to be the second. The initial training portion takes up much of the book, but once the women are finally deployed in country, we see that the work is clearly harrowing. With a fine eye for detail, Lemmon shows us what set this program apart, how the CSTs would take off their helmets and don head scarves once on the job, protect local women and children from incoming fire with their own armored bodies, guide families to safety in the midst of raids gone bad.

I give nothing away by revealing that Ashley White does not make it home. She is honored after her death as a true member of the special operations community, but Jason Stumpf, Ashley’s husband and an Army officer himself, quickly realizes that he doesn’t fit into the established casualty framework, built to support wives and mothers. That fewer services are available for male survivors hasn’t changed much since Max Voelz lost his wife early in the war.

When they graduated from selection school at Fort Bragg, each CST got a graduation certificate and a letter from their primary instructor. After overcoming so many physical and mental challenges to get through the grueling course, the letter addressed the question of success. “Know too the eyes of the Army and, increasingly, the Nation, are on you,” it read in part. “This is an opportunity for failure as much as it is one to succeed.”

How should one measure the success of this CST program? By the amount of intel collected? The number of Afghan families protected? In the middle of a gun battle, one CST thinks, as she cradles an Afghan baby in her arms, “What the fuck is my job right now?” A worthy question.

As Lemmon writes it, the CSTs themselves put a premium on physical fitness, the ability to survive the arduous training regimen, complete a ropes course, run and do pull-ups, not slow down a male Ranger team while assaulting an objective. By this standard, the CSTs were a great success, and a model for future male-female integration. But how much of an impact did the teams have on the overall mission? How was the intelligence gathered from women different than that gathered from men? These are questions prompted by Ashley’s War, but not answered by it.

Brian Castner is a former Air Force Explosive Ordnance Disposal officer, and the author of The Long Walk, an Amazon Best Book of 2012.

Thomas E. Ricks covered the U.S. military from 1991 to 2008 for the Wall Street Journal and then the Washington Post. He can be reached at ricksblogcomment@gmail.com. Twitter: @tomricks1
Tags: Military, War, Women’s Rights