Barack Obama is the most-followed account among world leaders.

Because of its near total ubiquity, it’s easy to overlook just how crucial Twitter has become to the public work of international diplomacy, where its used for both public outreach and propaganda. Nine years after the service’s founding, the social media tool has been so widely adopted by world leaders and their governments that it has become a primary tool of the trade.

According to a report released Tuesday by the public relations firm Burson-Marsteller, 86 percent of the United Nations member states have an official Twitter presence. Some 172 heads of state are on the network, along with more than 4,100 embassies and ambassadors.

The adoption and spread of the service is arguably as much a story about Internet penetration and adoption as it is about Twitter’s success as a platform or it’s still-to-be-determined business prospects. The most prominent diplomatic voices and leaders on Twitter continue to hail from developed countries with robust Internet infrastructures.

Having been aided in his first presidential campaign by an aggressive use of social media, U.S. President Barack Obama remains the most followed world leader on Twitter, according to the study. Pope Francis comes in second place, followed by Indian Prime Minister Narendra Modi, whose social media following has shot up since he won that office. 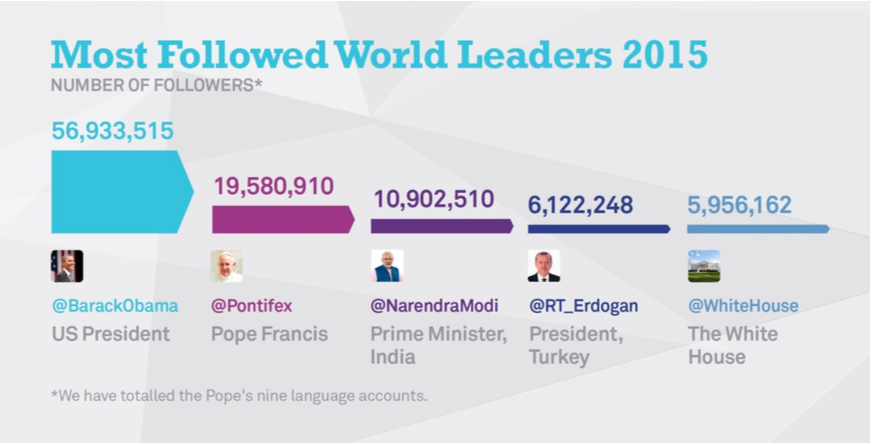 Not all leaders have taken to it. Neither Chinese President Xi Jinping nor North Korea’s reclusive dictator, Kim Jong-un, have joined the service. Also joining their ranks is German Chancellor Angela Merkel. China, however, is the only G20 country without an official Twitter presence.

By contrast, Iran’s Supreme Leader, Grand Ayatollah Ali Khameni regularly uses Twitter to antagonize the United States. His 120,000 followers were this week served up a platter of anti-American tweets tied to the ongoing violence in Baltimore.

In one way, the Burson-Marsteller report speaks to how a social media presence has become a kind of arms race among world leaders. Many want to have large follower counts — and, in all likelihood, sometimes those counts are inflated. Ukrainian President Petro Poroshenko saw the greatest growth in followers in the last year, but last month that figure began decline, leading the report’s authors to speculate whether he artificially boosted his number of followers. India, meanwhile, employs a small army of bots to retweet statements by official Indian accounts, making their posts seem more popular than they in fact are.

Indeed, the rush to embrace Twitter by world leaders and their diplomats hasn’t always resulted in increased transparency and has instead gifted the world a greater measure of noise and propaganda. When in March 2014 the U.S. State Department launched the Twitter campaign #UnitedForUkraine as a signal of solidarity with Kiev against Russian meddling in eastern Ukraine, it was quickly appropriated by the Russian Foreign Ministry — another active Twitter participant — to push their line that separatists in the east are fighting back against a fascist government.

A year after that campaign, it seems to have brought no tangible results — much like other hashtag campaigns. The viral #BringBackOurGirls movement has done nothing to free the children abducted by Boko Haram in Nigeria. And no measure of unity has managed to halt fighting in Ukraine.

The beauty of Twitter for the ordinary user is the ability to interact with anyone using the service, but this is something that world leaders rarely do. Twitter, for them, is more a one-way tool to push their political message.

The leaders who do choose to interact with their followers are perhaps indicative of how world powers have embraced Twitter more as a propaganda tool than as a two-way method of communication.