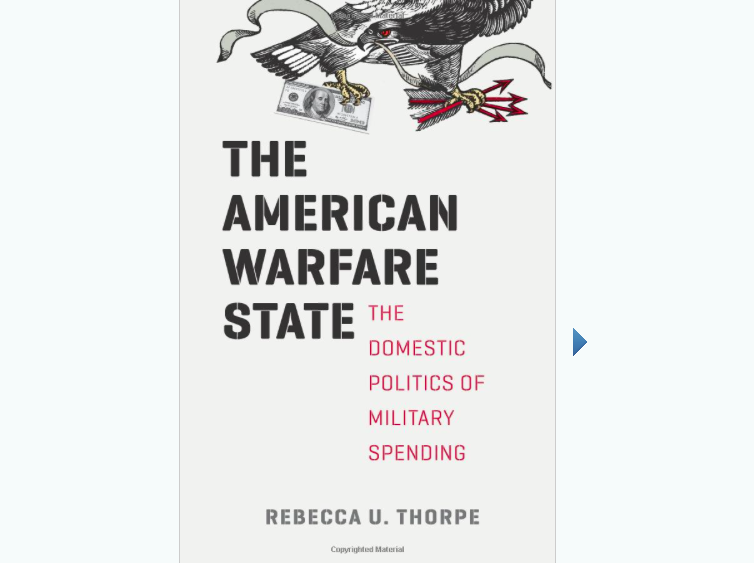 Who doesn’t benefit is the American People. And though the jury’s still out on the global impact of this century’s American war-making, the answer shaping there is not positive either.

Dr. Thorpe’s book takes us through the origins of the American Military in the debates of our Founding Fathers. Their world and the Europe that defined it was one of standing armies, imperial leaders, and constant warfare. They wisely sought to avoid war’s cost in lives and economic burden and so set up a constitutional system of checks and balances. It anticipated that the new president would instinctively press for the greater power a strong military would give him but countered this by bestowing on the new congress exclusive power to declare war and to put brakes on presidential ambitions by requiring conscription to field an army and immediate taxation to pay for it.

The system worked. Our nation stood up for necessary wars and then stood down after, each time largely disbanding its emergency army and settling back into relative peace. But then came along World War Two and the Cold War right after. We found it essential to first build a strong military and then keep it in place. And thus were the seeds sown for the American Warfare State of the book’s title.

I and others have decried the pernicious effects of the All-volunteer Force. Dr. Thorpe carries this topic forward well, so I’ll not make that case again here. But I note two new (to me) explanations from Dr. Thorpe of how we came to our permanent military and constant war.

The first is her assertion that with the easy way our elected leaders pass on today’s war costs to future generations, we have de-linked the expense of war from the public’s perception of that cost. War is now on the cuff and the natural brake of war’s economic burden removed from our political system. We do war — our children pay for it.

Secondly, the book’s author goes at length to show how interests of individual members of Congress with peculiar districts lend great strength to ever-increasing defense spending. We all expect that legislators with a district strong in its presence of defense contractors would advocate for defense. What the book shows is that it’s not the objective size of the defense industry in a district that matters most but rather the relative importance of that industry in that location. Along with data showing how defense spending has become spread to nearly every district in the land, she lays out the trend and tendency of defense up-deltas to disproportionately benefit rural and suburban areas in which the defense contractor becomes an inordinate economic presence. Thus the congressional base for a greater military has become broader, deeper in districts with greater reliance on defense spending, and, once past a tipping point some time during the Cold War, the dominant congressional determinant of the level of spending on national defense.

And from this peacetime military spending and the AVF’s enablement, the stage is set for unchecked presidential ambition and a shift from the Founding Fathers’ democracy to a new American Imperialism in which we cover the earth with our military power. Unfortunately for the outcome, we don’t practice true imperialism with all its ruthlessness, cruelties, and selfish drive. Instead we’ve hit on Imperialism-lite: we do the military stuff but eschew the nation conquering and subjugation intrinsic to genuine imperial drive. We have the instinct, a proud one, to make the world a better place. Now, with our permanent military — the most grand ever fielded — and the complete removal of the link between a decision for war and the will of the people, we have the power to go anywhere with combat as our primary national instrument and no checks to keep us from it. And we do. With far less success and far greater cost and risk than the American People ever signed up for.

Thus Iraq. Thus the Afghanistan quagmire. Thus Libya and Syria. Thus our American military with presence in 130 countries and bases in 63. We’ve become an imperial nation … but we suck at it and live in a universe of unforced errors and unintended consequences.

At risk three things: total abandonment of the wisdom of our Founding Fathers on the matter of war; future cost burdens that will cripple our nation (see Paul Kennedy’s The Rise and Fall of Great Nations, still seminal on the topic); and the deep risk that one of our military adventures will go so wrong as to threaten our existence.

We the people never decided to have a permanent American Warfare State, but here we are. Two major shifts in national policy are required to get back to the nation we think we are.

First is to put the costs of war into today’s taxes. This would stop our imperialism cold. And a shift of spending from military to domestic needs would bring tremendous benefit to our nation. Granted, it will be hard to get there; walking this backwards requires an undoing of the near-total reliance on defense contracts in many congressional districts and shift to a true peacetime economy that doesn’t preposition the dollars needed for war. But we whipped the Great Depression and the Great Recession and we paid for World War Two. We do economy well and we can do this.

Along with removing the easy-money foundation we now give to war-making, we also need to put the costs in blood and lives disrupted back onto all the people, not just that segment of growing isolation lured by benefits, salary, and careerist opportunities to volunteer for the military. End the AVF. Bring back the draft.

Rebecca Thorpe has written an important book. You should read it.

Captain Byron retired from 37 years continuous active duty in the submarine force and 15 years with a global corporation. He comments on this blog as “Rubber Ducky.”

Thomas E. Ricks covered the U.S. military from 1991 to 2008 for the Wall Street Journal and then the Washington Post. He can be reached at ricksblogcomment@gmail.com. Twitter: @tomricks1
View
Comments
Tags: Military, United States