How Cuba Could Stop the Next Ebola Outbreak

West Africa’s medical system was brought within an inch of its life by a devastating epidemic. But Havana could help nurse it back to health.

What follows is a modest proposal. It endeavors to solve three crucial problems all at once: U.S.-Cuba relations; the post-Ebola human resources deficits in physicians for Guinea, Sierra Leone, and Liberia; and the scarcity of skilled nurses in those same countries.

When the Ebola virus of the recent outbreak first surfaced, undetected in the village of Meliandou, Guinea, in December 2013, its spread across those countries was in part facilitated by the desperate state of health-care systems in the three poor, post-civil war nations. These countries never did have enough skilled health workers; Ebola has claimed the lives of devastating numbers in their ranks; and slowing the epidemic prompted the nations to lean heavily on the generosity of the Cuban government, which sent physicians to West Africa’s rescue. In many cases, the Cubans toiled inside facilities financed by U.S. taxpayers, and poignantly the U.S. Department of Defense swore willingness to treat infected Cubans should it be necessary — in the Army-built treatment unit outside Monrovia, Liberia.

This dramatic alignment of U.S., Cuban, and African interests, born from the exigencies of the Ebola epidemic, should now be directed to the reconstruction of the health-care systems of Liberia, Sierra Leone, and Guinea. 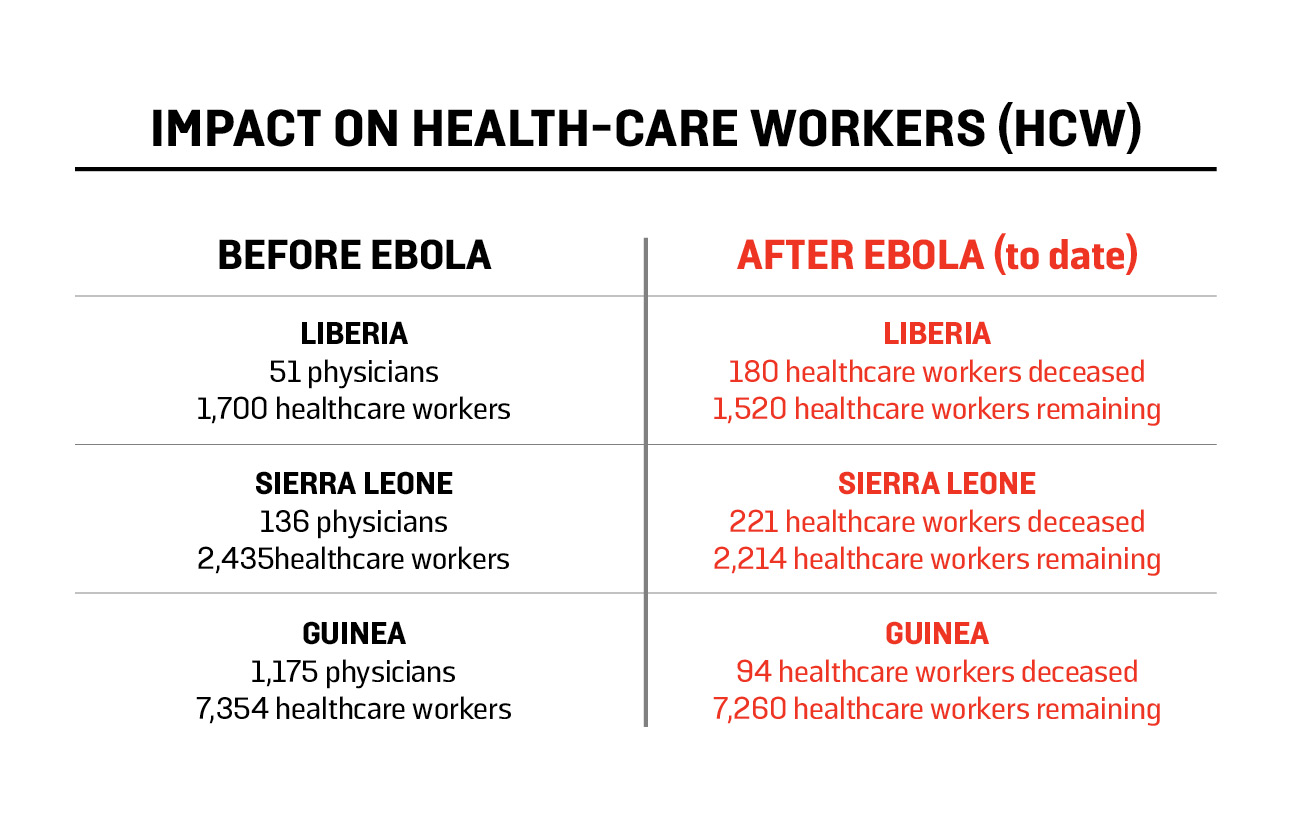 Tragically, the Ebola epidemic has claimed the lives of more than 10 percent of the health-care workforces in the three countries, killing some of the nations’ most highly skilled physicians and nurses. Such losses would be terrible in any place in the world, but are devastating where the infrastructure and human resources were as dismally stressed as they were before the epidemic. The loss of physicians is especially horrible, as their training and expertise are the result of enormous investments by the nations and the physicians’ personal education and sacrifice over more than a dozen years, post-secondary school. Liberia had 51 doctors in 2013; it has 46 today.

As this chart rereleased by the Liberian Ministry of Health at the end of April 2015 displays, 378 health workers contracted Ebola, which killed more than half of them. The greatest concentrations of loss were in the counties of Bong and Bomi, hit hard in the early days of the epidemic, and in the capital city of Monrovia, located in Montserrado County. 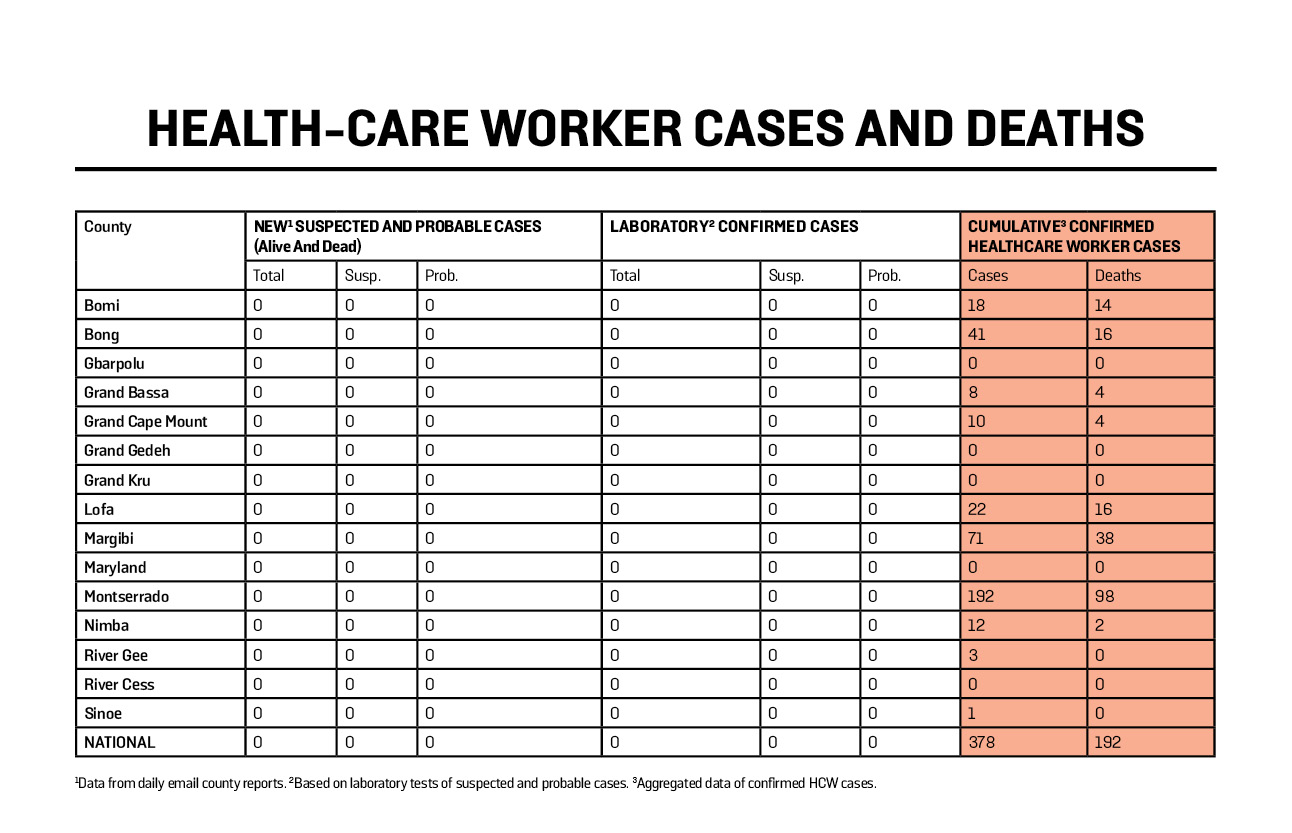 Sierra Leone had two doctors per 100,000 people in 2013, before the epidemic (compared with 245 per 100,000 in the United States). Toward the end of December 2014, physician Victor Willoughby died of Ebola in Freetown — the 11th of that country’s doctors to perish, leaving just 125 physicians for the nation and pushing the doctor-to-patient ratio close to 1.5 per 100,000 Sierra Leoneans.

The government of Guinea has never released precise numbers regarding infections and deaths among its physicians. In late March, three more doctors became infected, at which time the government acknowledged that over 50 doctors had contracted Ebola since December 2013, with a 66 percent death toll, or presumably 33, leaving the nation with 1,142 doctors.

In April, the U.S. Agency for International Development (USAID) announced the creation of a $126 million fund for the reconstruction of health systems in the three countries, which is a small step toward garnering the $8 billion that Presidents Ernest Bai Koroma of Sierra Leone, Alpha Condé of Guinea, and Ellen Johnson Sirleaf of Liberia say their nations need for full recovery. By late December 2014, many countries and private organizations had pledged support for the fight against Ebola, promising $4.3 billion — what Save the Children estimates is considerably more than the combined, normal annual governmental expenditures on health care for the three countries 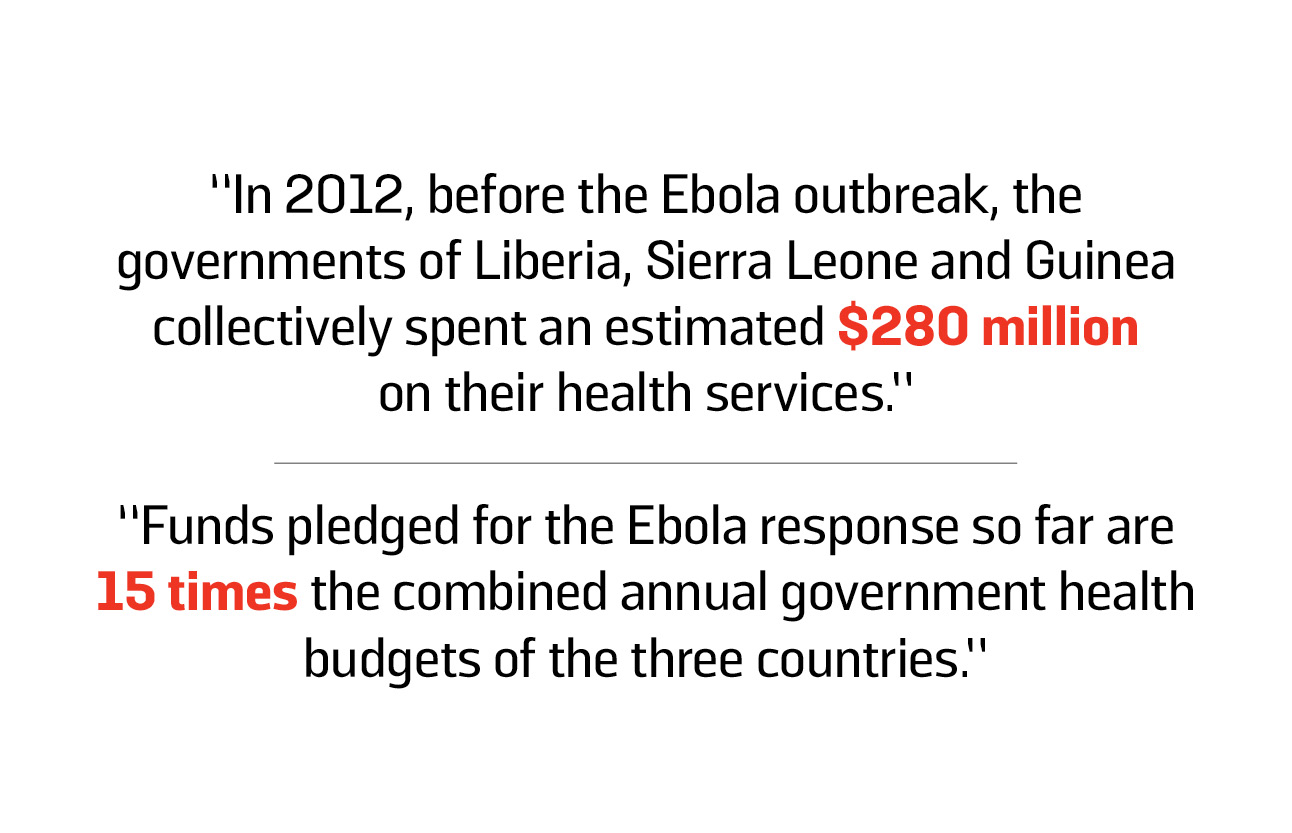 But the commitments were never fully realized — some estimates put actual disbursement at merely 40 percent. Moreover, the 2014 commitments were directed at Ebola elimination, not health systems preservation and, more importantly, improvement. As Ebola recedes and post-epidemic recovery replaces epidemic crisis response, the resources are scarce — especially human resources. “It’s not the matter of simply retraining people to fill the positions of people who died and going back to business as usual,” the USAID’s Karen Cavanaugh told a Washington audience in late April.

In the parlance of global health it is common to hear claims that shortages of skilled doctors and nurses can be offset with “task shifting,” meaning lesser-skilled paraprofessionals can be trained to execute some of the duties normally performed by physicians and registered nurses. Rather than fill the depleted ranks of medicine from the top, tasks are shifted down the skills ladder all the way to minimally educated community health workers. But the Ebola epidemic demonstrated the serious limitations of task shifting, as it proved impossible for Liberia, Sierra Leone, and Guinea to fight wars against disease on many fronts — frankly, on any fronts, save the battle against the virus. And today all three countries are struggling to get basic health services back in operation. A study recently published in the Lancet estimates that about 11,000 people died of malaria in 2014 and early 2015 due to disruption of prevention and treatment services targeting mosquitoes and providing medicine to infected children. If malaria prevention and clinical services can be fully realized in 2015, the researchers claim, some 15,000 lives can be saved this year.

Liberia’s president and Seth Berkley, CEO of the Gavi vaccine alliance, wrote recently on Foreign Policy’s website that “the health system was not strong enough to withstand Ebola, and in 2014 it quickly collapsed. As a result, coverage of routine immunization dropped from 88 percent to around 60 percent.”

In 2014, the government of Cuba sent 165 health-care workers to the Ebola epidemic, where the men (they were all male) provided dangerous front-line medical care. One of them, physician Feliz Baez Sarria, contracted Ebola during his service in Sierra Leone and then returned to battle the epidemic after his recovery. “It’s been like coming back from a war, alive. My compañeros shouted, smiled, cried, and hugged me,” he said on his return to Sierra Leone after recovering from Ebola. While many countries provided technical assistance, logistics, and training, the Cuban government sent more physicians to provide direct health care than did any other nation. I encountered cadres of Cuban doctors nearly everywhere I went in Sierra Leone and Liberia during the fall of 2014.

Members of the Cuban medical corps are back in their island nation now, greeted as heroes in a country that has put health diplomacy at the center of its foreign policy.

A centerpiece of the Cuban health diplomacy effort is the Latin American Medical School (ELAM), located about a two hours’ drive from Havana in Santiago. Since 2005 the school has graduated 23,000 physicians and now trains 10,000 at any given time. I visited the sprawling campus, its classes, and its laboratories in 2010 and met with students from the United States and Haiti. ELAM isn’t ever going to rival Johns Hopkins’s or Harvard’s medical school for training in advanced tertiary clinical care and research, but that’s not its point.

The goal of ELAM is creation of thousands of primary-care doctors who can handle infectious diseases, pediatric and OB-GYN care, preventive medicine, and the basics of noncommunicable diseases such as cardiovascular difficulties and cancer. The typical student, regardless of his or her country of origin, enters ELAM at age 18 and spends six years getting a combined undergraduate and medical education, including hands-on clinical care. By age 24 to 30, depending on the individual’s proficiency in Spanish and science, a student is typically ready to take licensing examinations in most developing and middle-income countries — though not in the European Union or the United States. The training ELAM students receive is appropriate to poor-country settings or to practicing medicine in pockets of poverty inside wealthier nations.

I have discussed with Cuban authorities the possibility of sending a large number of nurses from Guinea, Sierra Leone, and Liberia to ELAM for physician training. All three African countries have schools of nursing, offering the possibility that they could train replacements for the nurses locally. And nurses start with a skill set that allows them to reach physician licensing much more rapidly than typical 18-year-old medical students. With physicians in Cuba who have had experience working in the three African nations, there may be a core group prepared to facilitate training and cultural acquisition of language and other skills necessary to matriculate in ELAM.

The Cubans are interested. But they want to get the Americans on board.

Cuban officials I spoke with were reluctant to provide details regarding the costs of training African physicians, out of concern that any public statements during diplomatic negotiations with U.S. President Barack Obama’s administration might be misconstrued. While ELAM is designed to handle foreign students, most are from Latin America and obtain sponsorship to cover their travel, housing, and other expenses from either their home governments or private organizations, such as churches and political parties. Such sponsorship cannot be expected from impoverished Liberia, Sierra Leone, or Guinea.

A joint U.S.-Cuban physician-training effort would not only solve the human resources crisis in the Ebola-hit nations, but would further open the doors of diplomatic cooperation between Washington, and Havana. Through funding from USAID and perhaps private sources — from the likes of, say, the Bill & Melinda Gates Foundation — the costs of travel, housing, and education for African nurses, as well as subsidies for educating their nursing replacements inside the West African countries, could allow rapid deployment of 200 or more nurses to ELAM. Within three to four years the African nations would see their physician ranks swell, thanks to the United States and Cuba. The potential outcome of this partnership could be that for a fraction of the cost of constructing a medical school in West Africa, and far more rapidly than such a school could every produce skilled physicians, the U.S.-Cuba connection could transform a large number of nurses into doctors ready to staff clinics by 2018 or 2019.

Details can, and should, be examined closely, in haste. Most nurses have families — should children be relocated with their medical-trainee parents? What forms of physician training ought to be emphasized? Should U.S. doctors go to ELAM, providing special lectures and training courses for the African students?

Such details aside, there are few other means imaginable for speedy creation of a significant physician pool for the beleaguered nations. Training in wealthy countries is not only far more costly, but poses serious crises of conscience for newly minted doctors who are tempted to remain in Europe or North America, sending remittances home rather than returning to their desperately poor countries to practice medicine in poorly resourced clinics. It is inconceivable that medical schools can be constructed inside the region on a meaningful time scale. And neighbor nations, such as Ghana, Nigeria, and Senegal, are hard-pressed to train sufficient physicians in their medical schools to fill their own enormous human resources gaps.

Combining the money, logistics, and talent of the United States, Cuba, Sierra Leone, Guinea, and Liberia to rapidly train a team of new doctors for the West African nations offers the most cost-effective, swift, and appropriate means to solve the health systems crisis faced in the Ebola-hit countries.

I hope Washington, Havana, Freetown, Conakry, and Monrovia are reading this.

Laurie Garrett is a former senior fellow for global health at the Council on Foreign Relations and a Pulitzer Prize winning science writer. Twitter: @Laurie_Garrett