‘Team of Teams’: Good on JSOC in Iraq, but not that much new for business types 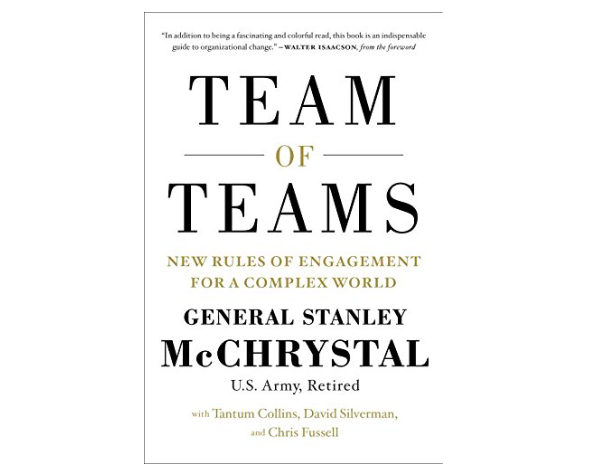 One is a Gladwell-esque attempt to relate a variety of stories, most familiar but some new, that are meant to illuminate different aspects of both the history of management thought and of the authors’ solution to the problem of how to make large bureaucratic organizations flexible and adaptive enough to succeed in the modern world.

The other is a description of how McChrystal and his team radically improved the performance of the Joint Special Operations Command (JSOC) in Iraq by transforming it from a rigid hierarchic structure to, in their term, a “team of teams.” JSOC’s new structure and method of operating allowed it to integrate intelligence more effectively and plan and launch operations much more quickly than it ever could have before, resulting in a series of (temporary) triumphs, culminating in the killing of Abu Musab Al-Zarqawi, the leader of al Qaeda in Iraq.

Team of Teams has some significant weaknesses, but its description of how a remarkably gifted leader transformed an organization in the most challenging of circumstances both adds to our understanding of the Iraq War and is likely to be helpful and occasionally inspiring for executives. It may be particularly useful for business leaders who are unlikely to read the academic research that has come to very similar conclusions, but who might instead be drawn to a story of organizational transformation under literal, not metaphoric, fire.

Many large organizations today struggle with exactly the problem McChrystal and his co-authors identify: the need to be far more agile, adaptable, responsive to information from the environment, and able to learn and innovate quickly in response to new, unanticipated, and rapidly-evolving threats than they would have had to be a generation ago. The solutions they identify, of breaking down organizational silos, building personal ties between members of different units within the organization to enable information flow and cooperation, and minimizing or eliminating leaders’ tendency to micromanage subordinates in favor of empowering people to make their own decisions whenever possible, are familiar, but also useful, powerful, and likely to be implementable by business leaders.

Team of Teams’ strongest effect is that it leaves me enormously impressed by McChrystal’s abilities. Few leaders could have stepped back from the war effort in Iraq and rethought some of the most basic assumptions about how the military should operate. Even fewer could have countered the tendency to throw more resources at the problem or optimize current processes instead of reinventing the organization wholesale. Even more impressive, of course, is that after McChrystal and his team diagnosed the problem they faced, they were able to successfully implement this radically new approach in extraordinarily difficult circumstances.

Teams of Teams’ most useful aspects for executives are likely its concrete examples of how McChrystal and his team reformed JSOC, with analogues of many of those approaches available to business leaders. Their solutions may not be new, but few people can claim to have implemented such ideas so successfully or in such adverse conditions. Team of Teams’ suggestions are far from complete but they are, without question, useful, interesting, and often thought-provoking.

Team of Teams is far from flawless. It does not explain, for example, which circumstances that make its preferred organizational form preferable to traditional ones, or describe the advantages of the old form over the new one. It could have been strengthened by engaging more deeply with the management literature on the organizational forms it describes, particularly the work of Michael Tushman on ambidextrous organizations and Ranjay Gulati on disrupting organizational silos. It does not engage with the differences between militaries and businesses, nor does it offer advice to leaders with authority less absolute than McChrystal’s was on how to win over opponents.

The book also stumbles when its attention shifts from the military in general and Iraq in particular. Its stories of Frederick Taylor pioneering scientific management, for example, may be interesting to readers unfamiliar with them, but they are likely to be old for many, and they tend to distract from the book’s primary goal of explaining a different model of management. In some cases the authors’ relative unfamiliarity with business shows — their attribution of the financial crisis to a lack of supervision of junior employees in Wall Street firms by senior managers, for example, shallowly (and arguably mistakenly) analyzes a complex event of surpassing importance.

It also has a small number of factual and editorial errors. But these should not impede anyone from reading Team of Teams or taking its ideas about management seriously.

Despite its weaknesses, Team of Teams is valuable. Its most important advice for leaders, however, is likely to be the hardest for them to take. Information technology enables leaders to monitor their organization with unprecedented immediacy and fidelity. McChrystal and his co-authors acutely observe that this is a double-edged sword. Such transparency can be a huge asset when it allows leaders to learn about what their followers are doing, and when it allows followers to observe leaders and get general guidance from them. When it is used to enable leaders to micro-manage their followers instead, this transparency is an organizational bane. McChrystal’s description of his personal struggle with his controlling instincts (instincts shared by most leaders) is therefore likely to be particularly valuable to other leaders struggling to make the same organizational transformation.

Gautam Mukunda is an Assistant Professor at Harvard Business School and the author of Indispensable: When Leaders Really Matter. He has published on leadership, military innovation, and the security and economic implications of advances in synthetic biology.

Bilawal Bhutto Zardari on Islamabad’s relations with Beijing and Washington and how his country is dealing with deadly floods.