Genocide is Going Out of Fashion

Though the world seems crueler than ever, a close look at the data about mass killings yields reasons to hope.

In a recent Democracy Lab piece, editor Christian Caryl laments that genocide and mass atrocities continue to occur, and wonders why. After nodding to arguments that “we’ve made a lot of progress in preventing mass slaughter,” he turns pessimistic:

I have to confess that I don’t find the signs of progress he cites quite so encouraging. There are far too many places in the world where people are still being singled out for death on a grand scale simply because they belong to the wrong group.

In moral terms, it is impossible to disagree. Any situation “where people are still being singled out for death on a grand scale simply because they belong to the wrong group” is one situation too many.

Empirically, however, the historical trend is more encouraging than Caryl’s enumeration of recent examples and potential genocides implies. In The Better Angels of Our Nature, Steven Pinker aggregates data on genocides (loosely defined) over the course of the twentieth century from three public sources: research by R.J. Rummel, the Political Instability Task Force (PITF), and the Uppsala Conflict Data Program (UCDP). Each of these data sets is imperfect in its own way, and the quality of all estimates of the tolls of specific episodes of mass killing — in these sources or elsewhere — ranges from careful approximation to crude guessing. Still, the data they have produced collectively represent some of our best well-educated guesses about the frequency and severity of deliberate, lethal violence against noncombatant civilians by states and other armed groups over the past 100 years.

So what do those data show? Below, via Max Roser, is a reproduction of Figure 6-7 from Pinker’s book, showing annual death rates according Rummel and PITF data from 1900 to 2008. As Pinker wrote, “in the four decades that followed [the 1940s], the rate (and number) of deaths from democide went precipitously, if lurchingly, downward.” Contrary to popular belief, that long-term decline did not stop when the Cold War ended. Despite terrible genocides in Bosnia, Rwanda, and elsewhere, the global trend remained “unmistakably downward… The first decade of the new millennium [was] the most genocide-free of the past fifty years.” 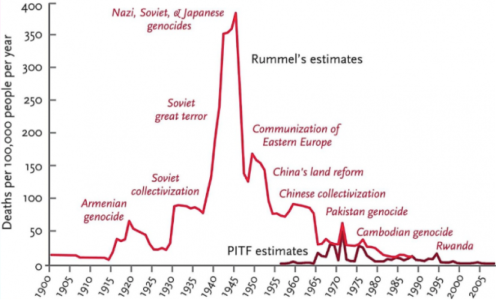 Coincidentally, the statistics discussed in Pinker’s book stop just before the start of the global spell of economic malaise and political instability that began with the financial crisis of 2008 and includes the Arab Spring. That spell has produced new episodes of mass atrocities, including ongoing ones in Syria, Iraq, South Sudan, and the Central African Republic. To assess the trend since then, we can turn to the most recent data from UCDP, which now covers the period from 1989 through 2013. The chart below plots deaths per 100,000 people per year — the same statistic as in the previous chart, and shown on the same scale — for that 14-year period. UCDP’s data set includes low, best, and high estimates; to err on the side of overcounting, I used the high ones. The estimates of global population used to calculate the annual rates come from the World Bank’s World Development Indicators. 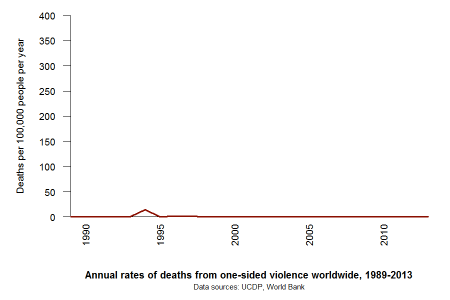 As the chart shows, the spell of global political instability that began in the late 2000s has not yet produced a significant increase in the severity of one-sided violence around the world, at least as of the end of 2013 and as far as UCDP can tell from its sources. This chart uses the same scale as the previous one to facilitate easy comparison. At this scale, the recent annual rates of less than 1 death per 100,000 people are hard to tell apart from zeros. The annual rate more than doubled from 2012 to 2013 — from 0.05 to 0.12 — but both of those figures remain radically smaller than the rates in the tens or hundreds the world saw just a few decades earlier. Even if UCDP’s best estimates are lower than the true counts — and, as UCDP acknowledges, they almost certainly are — the long-term decline has not been reversed. The latest data from PITF show essentially the same thing.

In short, humans certainly do continue to perpetrate mass killings, but the frequency and intensity of these terrible episodes has diminished significantly over the past half-century, and even the recent increase in violent instability has not reversed that longer-term decline. As horrible as the past few years may seem when reading the news, the intensity of deliberate, lethal violence against civilians remains an order of magnitude lower than what we typically saw just a few decades ago, which was itself an order of magnitude lower than the peak rates in the middle of the twentieth century.

Why? This, as Dartmouth professor and genocide scholar Ben Valentino wrote in a recent email, is the “million dollar question.” In his book, Pinker construes the decline in mass atrocities as part of a broader and longer decline in violence among humans, and attributes that trend to changes in cultural and material conditions that increasingly favor and reward our cooperative instincts over our more violent ones.

Valentino’s own answer resembles Pinker’s in general, if not in all the specifics. Valentino spotlighted two forces: a decline in the frequency and intensity of civil wars, and the collapse of communism. “Since most genocide and mass killing occur during civil war,” he wrote in an e-mail, “fewer civil wars means fewer mass killings.” As for why civil wars are rarer, “I’m inclined to believe that stronger central governments and the rise of full democracies are at least a big part of the story.” Meanwhile, the collapse of communism removed both the perpetrators and, to some extent, the motive behind many of the worst mass killings of modern history, and “nothing has really replaced communism as an ideology for mass killing on that scale.”

Valentino’s colleague and sometimes-coauthor Chad Hazlett, now a political scientist at UCLA, also sees the collapse of communism as an important part of the explanation, but more due to its effects on competition in the international system than the waning of the ideology. During the Cold War, the superpowers often prolonged and intensified armed conflicts within states by supporting rival sides, and many those conflicts involved mass killings of civilians. After the USSR collapsed and the Cold War ended, however, that external support evaporated, and with it went most mass killings. “Without superpower support to both sides,” Hazlett wrote in an email, “long-running conflicts and atrocities began to come to an end at unprecedented rates, producing a long decline in the number of atrocities.”

Scott Straus, a professor of political science at the University of Wisconsin-Madison who has written several books on the topic, sees the wider decline in armed conflict as a relevant factor, too. He also gives partial credit to changes in global norms and improvements in international and domestic policy options. He emailed:

Peacekeeping is better mandated, bigger, and more equipped for civilian protection than before. A range of non-military mechanisms is in place, from commissions of inquiry to “smart sanctions” to threats of international prosecution. I am as skeptical as the next scholar and practitioner on the specific effectiveness of each of these but the policy tools are at a minimum thicker and more applied than in the past. Whether these measures are causally related to the decline of mass atrocities is difficult to know at this stage, but there is a plausible connection between these developments and the decline in the mass atrocity events.

All of these scholars, including Pinker, acknowledge that this decline is not necessarily permanent, and none is certain of its causes. The trend itself is clear, however. While we recognize and grieve for those who suffer and die in the atrocities that persist, we might choose to take some encouragement from that fact.

This piece was written as part of the author’s work as a consultant to the Early Warning Project, a new effort to provide routine, public assessments of mass-atrocities risks for countries worldwide.