A intensive search ensued when three-year-old, New Zealand police dog by the name of Thames went missing on May 3.

A intensive search ensued when three-year-old, New Zealand police dog by the name of Thames went missing on May 3. The search team was expansive and according to the New Zealand Herald, included among others, the Wairarapa search and rescue team, some “kindhearted” Samaritans, and Thames’s handler, Constable Mike Wakefield. 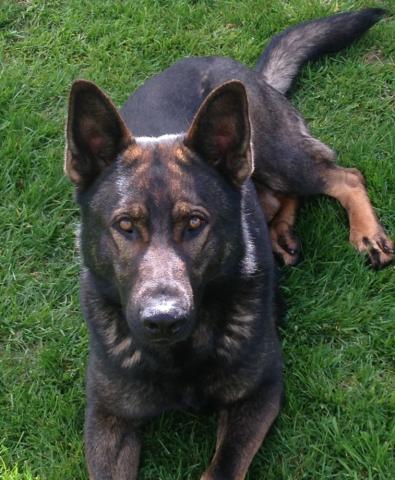 During the first two days of the search, the 20-person team looking for the sable-colored dog “unsuccessfully scoured the dense off-track terrain where he was last sighted.” The search was suspended due to weather for a couple of days. But, on the seventh day looking in the Tararua Forest Park, a “big fresh paw print in the mud …  gave Constable Wakefield and the SAR team a welcome boost” the New Zealand Police Department said in a statement, feuling their hope that the dog was alive and close by. It was Wakefield who saw his partner first; he whistled and Thames, eventually, came running.

“I whistled and called but he ran off as if to say come this way before running back and giving me a big lick. He wolfed down half of my salami which is a treat for him, I gave him a cuddle and we had a big play,” Wakefield said. “I was just lost for words.”

Thames reportedly weathered the cold temperatures and nights outdoors well enough, but was plenty happy to be with his handler, as you can see in the video below which captures their reunion.

For the entire seven days his dog was missing, Wakefield searched for him when he could — even his wife and family joined in to look for Thames. Despite the windy conditions (which meant the couldn’t fly out of the woods) the six-person team, and newly found dog, made the trek down to the park entrance together, happily.

Thomas E. Ricks covered the U.S. military from 1991 to 2008 for the Wall Street Journal and then the Washington Post. He can be reached at ricksblogcomment@gmail.com. Twitter: @tomricks1
View
Comments
Tags: New Zealand, Rebecca's War Dog of the Week