Mapped: The State of Play in Iraq Following the Fall of Ramadi

The Islamic State moves to consolidate power in Anbar.

So much for the Islamic State militant group being on the “defensive,” as President Barack Obama put it in February. Over the weekend, the group’s forces stormed into the Iraqi city of Ramadi and seized control of government buildings, as forces loyal to Baghdad melted away in the face of the assault. It’s the Islamic State’s most significant victory since seizing Mosul in June and has set in motion a series of events that raise questions about the Iraqi army’s ability to repel the Islamic State and sets the stage for a likely battle to reclaim Ramadi.

So how can we now understand the state of play in Iraq? The map below, drawn up the analysts at the Institute for the Study of War, a Washington think tank, gives us some idea. The conquest of Ramadi helps consolidate the group’s control of Anbar province. Though it’s a little hard to see, the city of Haditha remains one of the major holdouts in Anbar. Iraq and U.S. forces still hold Al Asad air base. 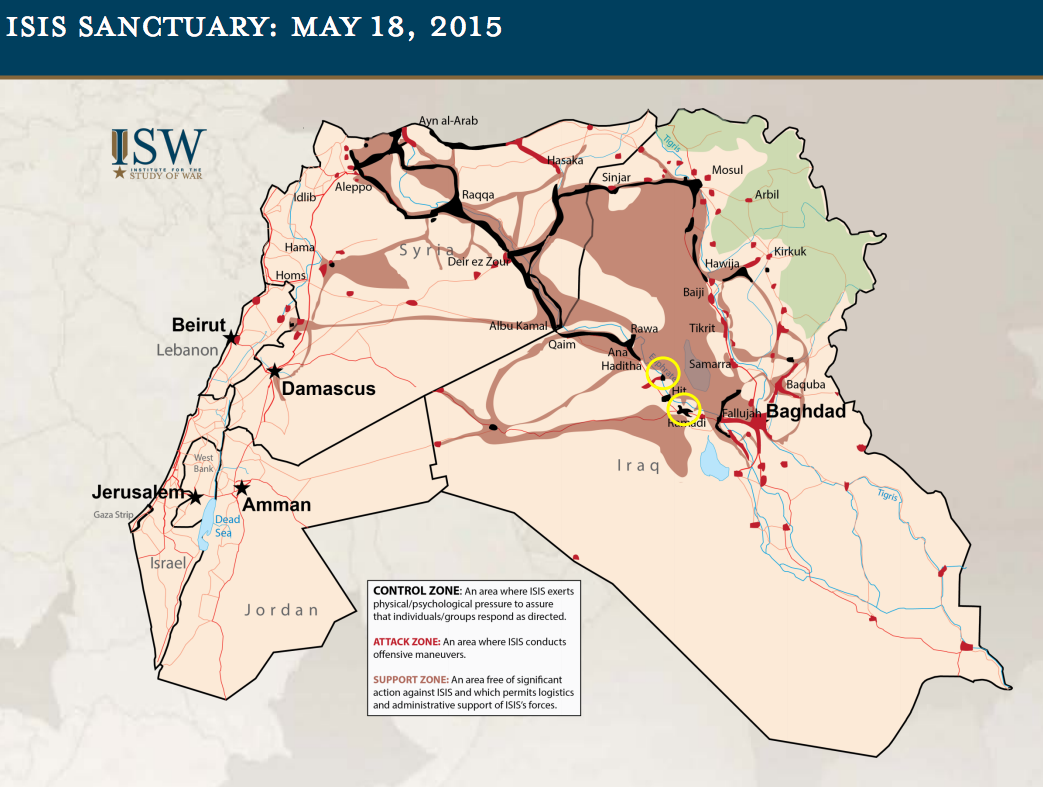 The analysts at ISW place this latest Islamic State offensive in the context of a series of maneuvers to consolidate the area under their control. They see the action in Ramadi as part of a long-running effort to eliminate pockets of resistance in Baiji, the al-Qaim/al-Bukamal border crossing, the seizure of Sinjar following the fall of Tal Afar, and the attempted assault in Kobani, in Syrian Kurdistan. 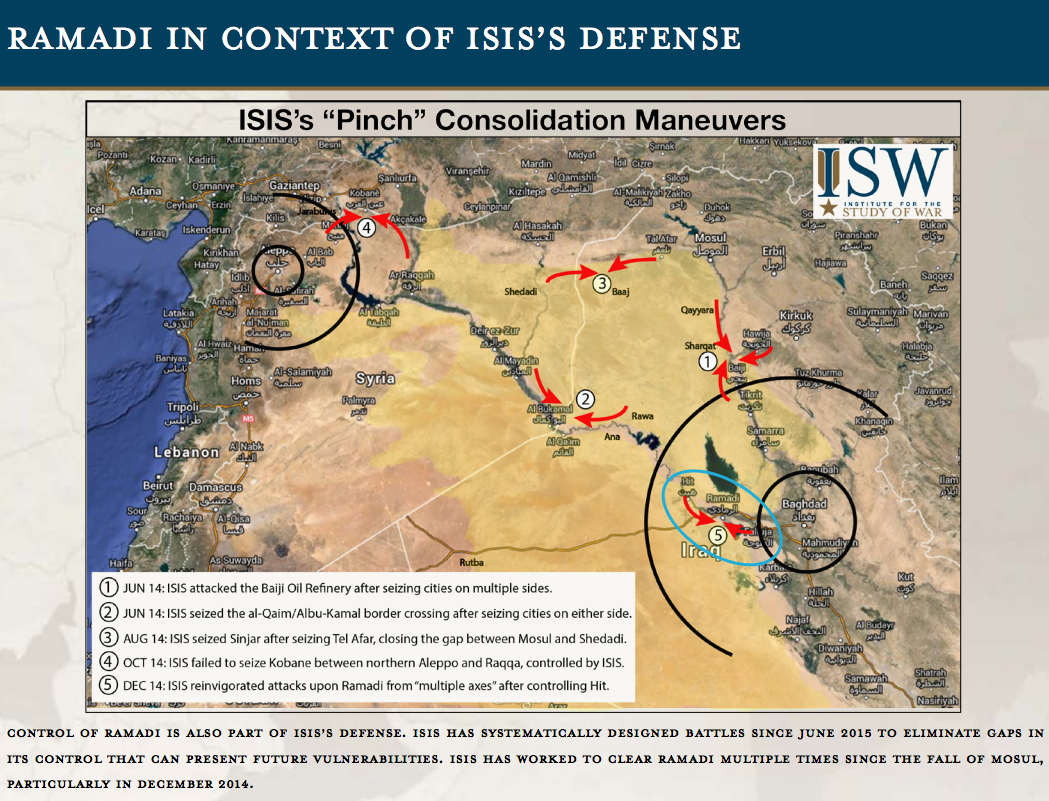 The ISW analysis points out that the Ramadi attack comes as the Iraqi security forces have been forced to commit significant resources to the battle for control of the Baiji refinery, Iraq’s largest. 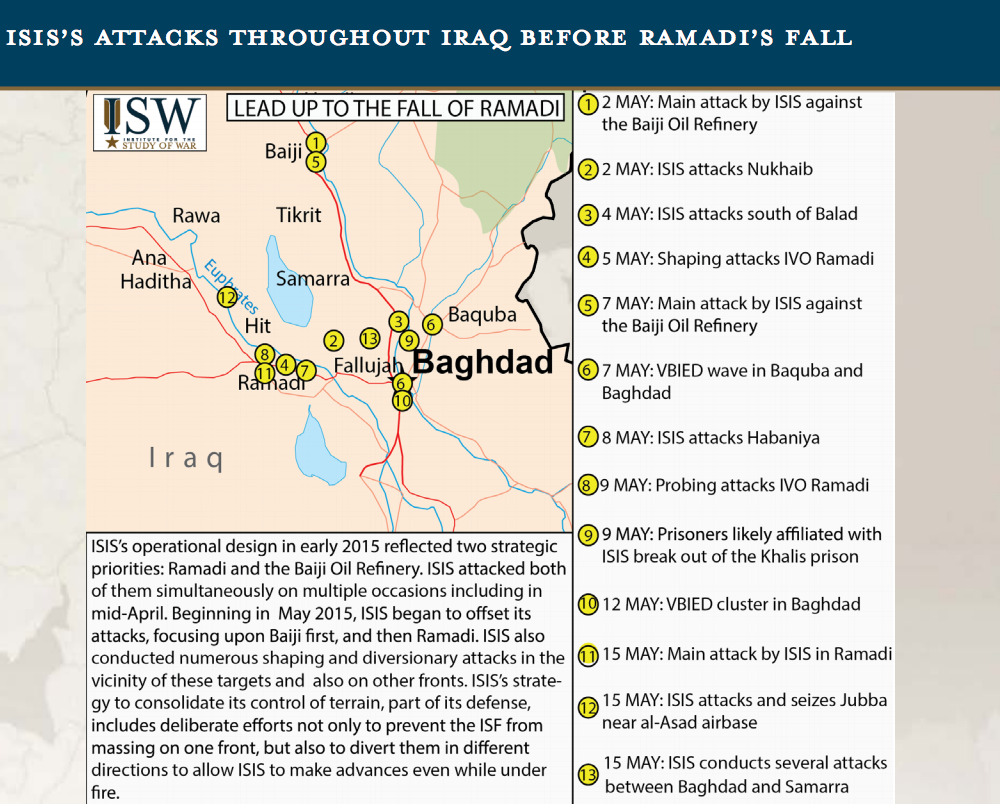 As after the fall of Mosul, images are now circulating on social media of Islamic State fighters posing with U.S.-supplied equipment seized by fleeing Iraqi security forces.

PTs: More pics from #Ramadi’s 8th Brigade Base, captured by #IS. #Iraq pic.twitter.com/DkSsn92Oi7

Pentagon spokesman Col. Steve Warren said Tuesday that the Iraqi army left behind “half a dozen” tanks, about 100 wheeled vehicles — including several artillery pieces — and “dozens” of tracked armored vehicles. If there’s any bright side in this, Warren said that at least some of these vehicles were in such disrepair that they were all but unusable.

As in Mosul, the fighting in Ramadi has been accompanied by a humanitarian disaster as civilians flee from in a city that had once been home to nearly half a million residents. According to the International Organization on Migration, just over 40,000 people have been displaced by the fighting in Ramadi since May 15. In total, there are about 420,000 displaced persons in Anbar province, and 2.8 million have been displaced throughout Iraq since January last year.

The developments in Ramadi are likely to put intense pressure on Iraqi Prime Minister Haider al-Abadi to reverse losses in what is seen as a key battleground to expel the Islamic State from Iraq. Ramadi has been surrounded by the Islamic State for the better part of a year but had until now managed to withstand periodic assaults by the group. The city’s fall came amid a sandstorm, which the Islamic State reportedly used to infiltrate Ramadi and avoid U.S. airstrikes.

For a sense of the enormity of such storms and how difficult it is to carry out airstrikes in such conditions, check out this video of a 2005 storm that hit a U.S. base in Anbar:

Iraqi and paramilitary forces are now massed outside Ramadi in anticipation of an attempt to quickly reclaim the city. Abadi has called up Shiite militias to aid in Iraqi forces, a move that echoes the assault on Tikrit earlier this year. Many observers are deeply concerned, however, that an assault by a Shiite-majority force on a Sunni-dominated city may lead to ethnic violence and further exacerbate tensions within the group. The Islamic State has gained some public support among Sunnis in Anbar province, where large parts of the population feel the Shiite-dominated government in Baghdad has systematically excluded them.

In perhaps a sense of what’s to come, an image of Hadi al-Amiri, the transportation minister and the head of the powerful Iranian-backed Badr Brigades, conferring with Iraqi officers about a coming assault on Ramadi has been circulating on Twitter:

In another revealing piece of social media, the Iraqi Ministry of Defense has released what passes as good news for the country’s beleaguered armed forces, a video of a helicopter rescue of Iraqi troops trapped by Islamic State fighters:

That’s about as good as it gets in Iraq these days.