Forty years ago, Sikkim was officially annexed by India. Since then, the former monarchy has struggled to hold onto its traditional character. 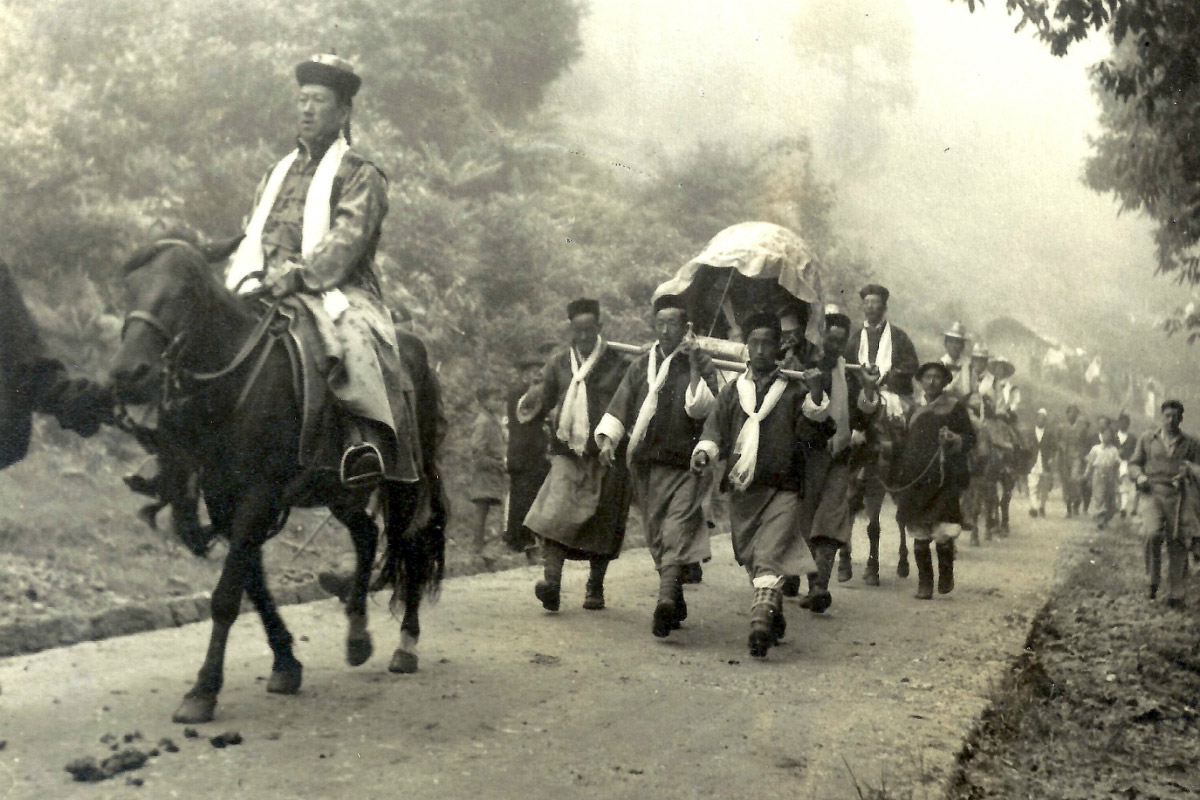 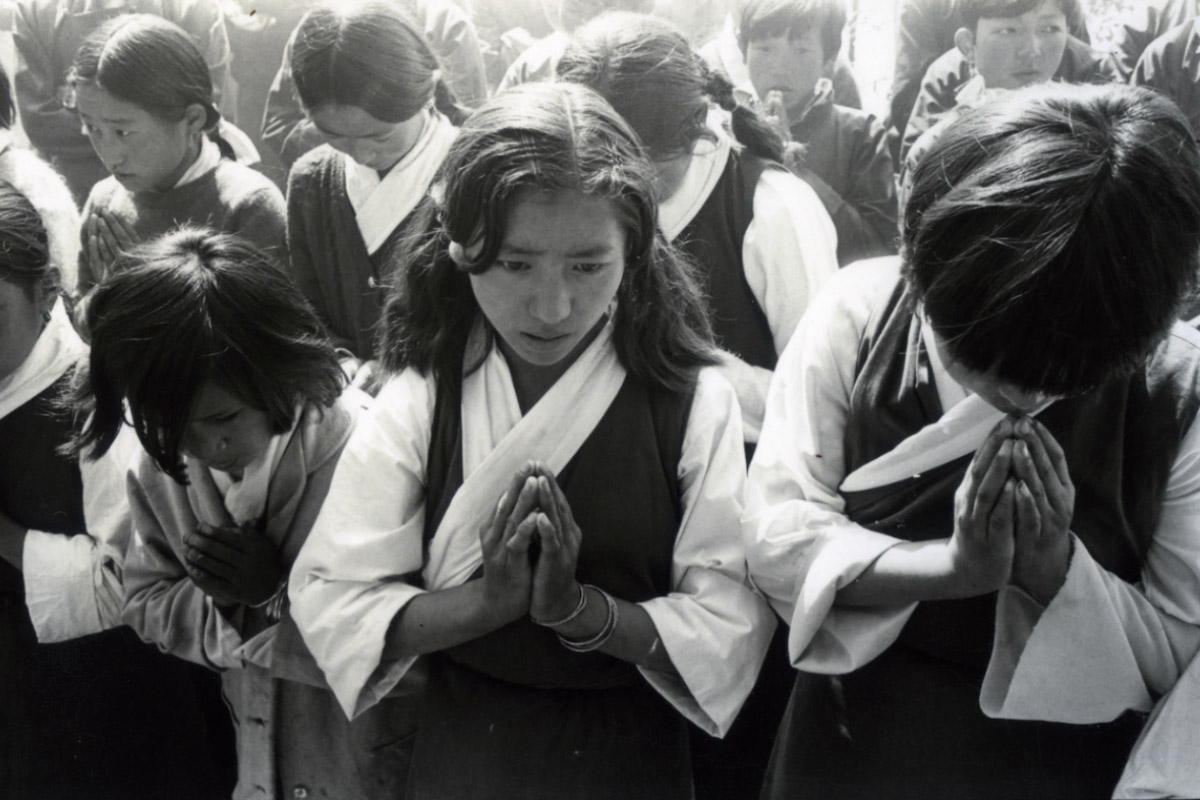 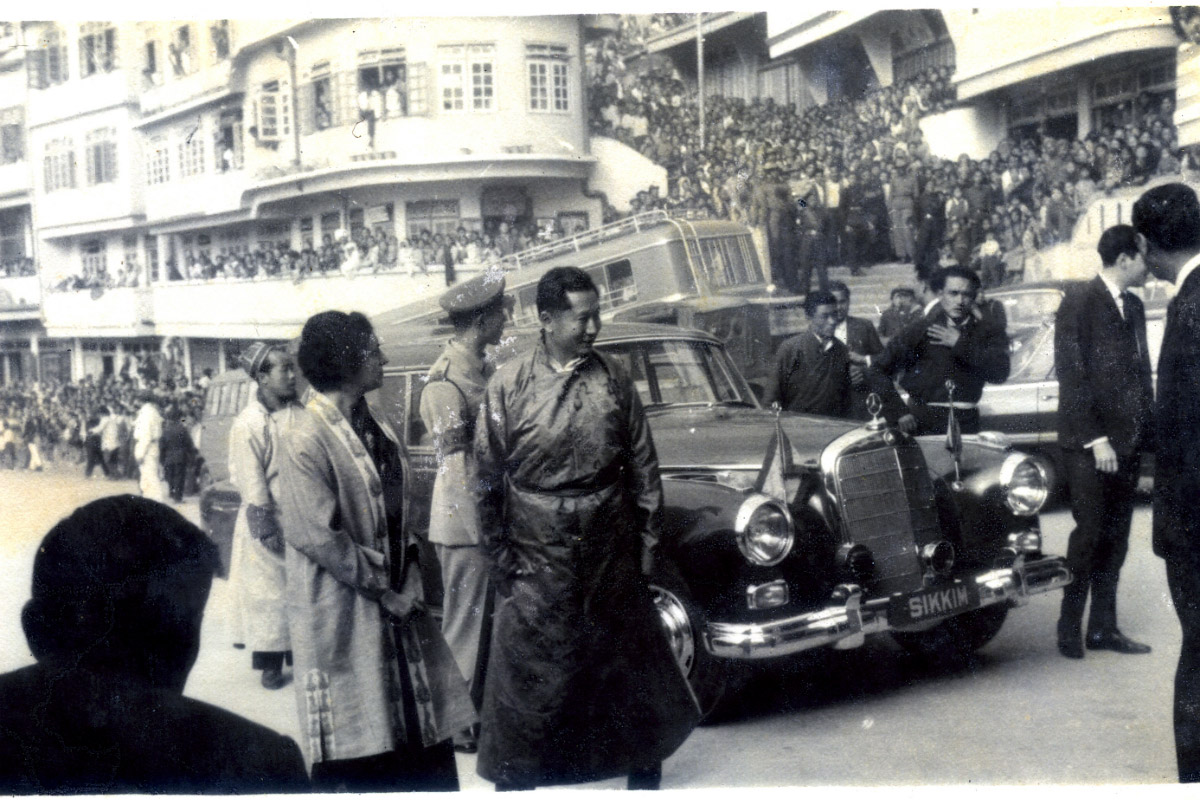 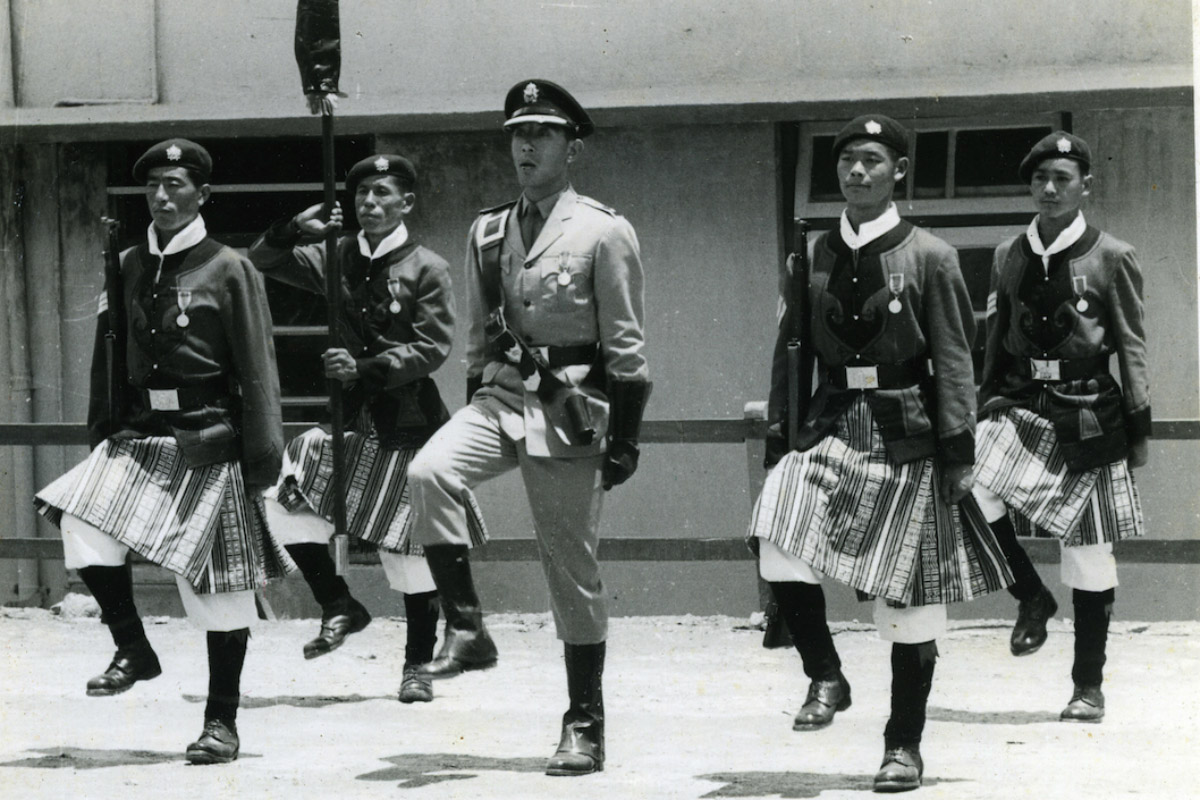 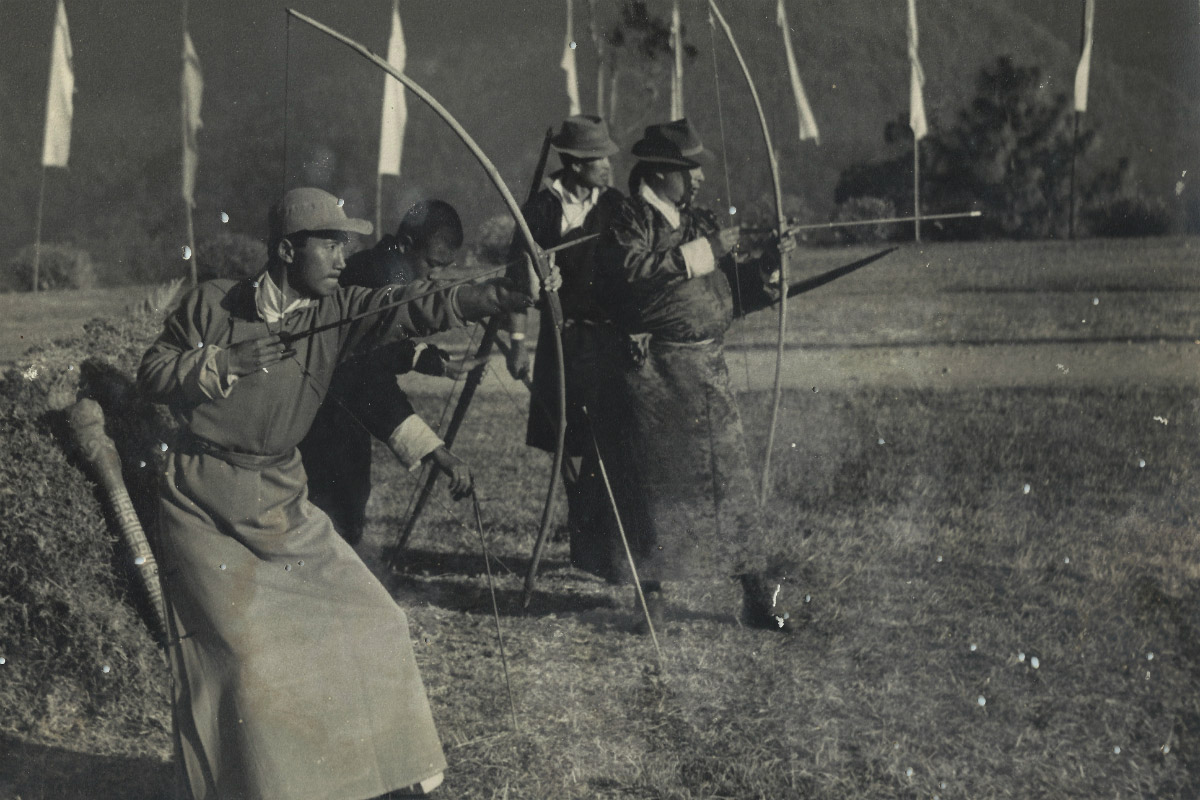 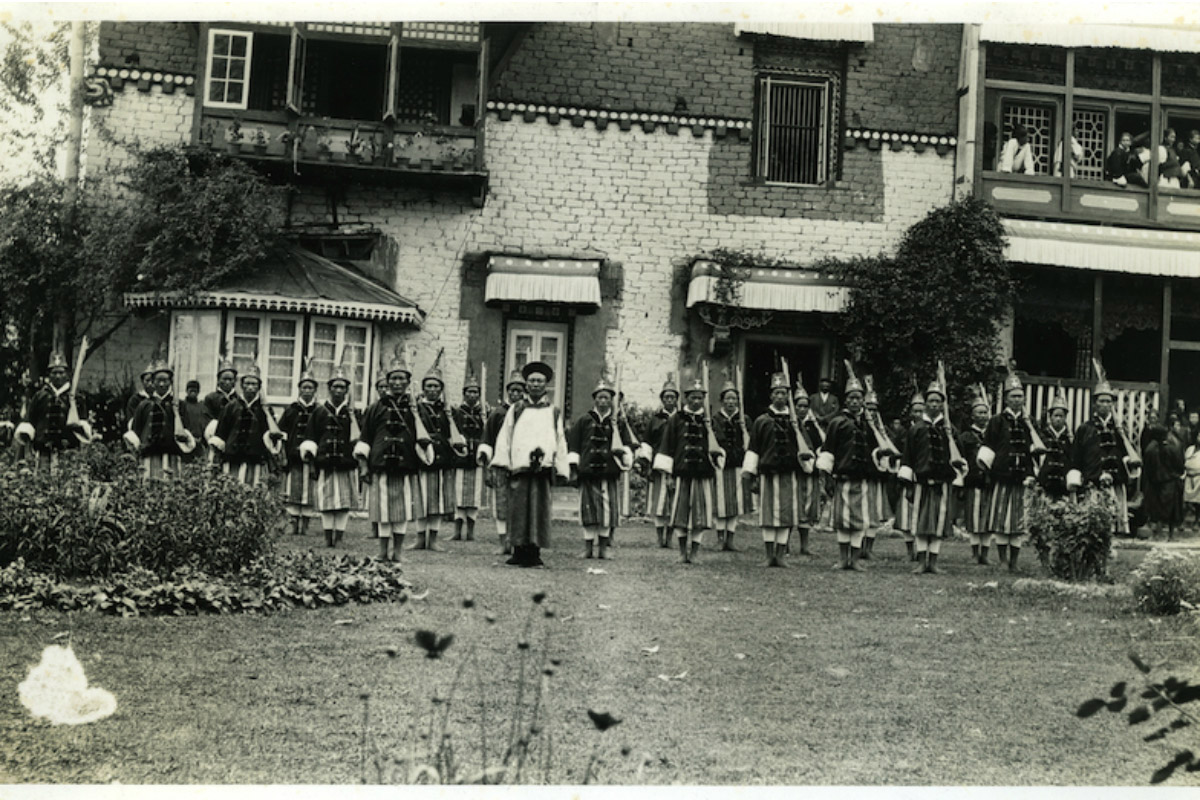 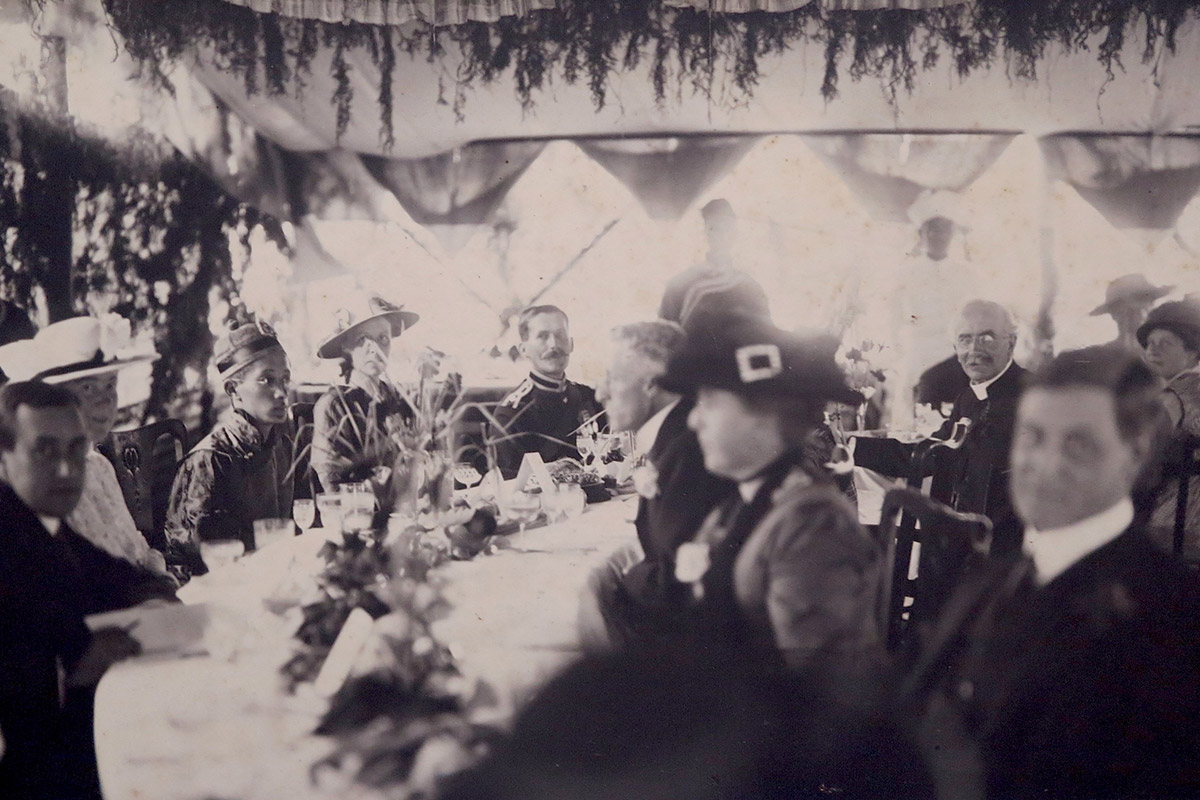 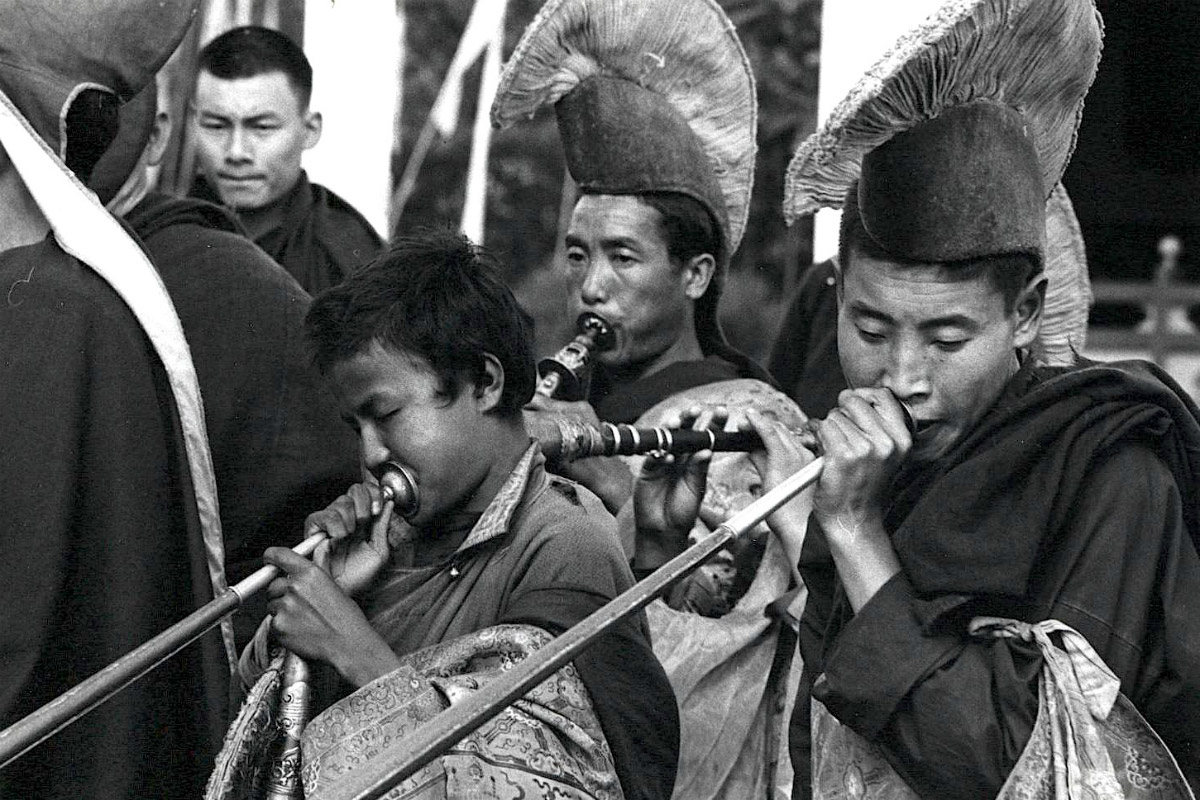 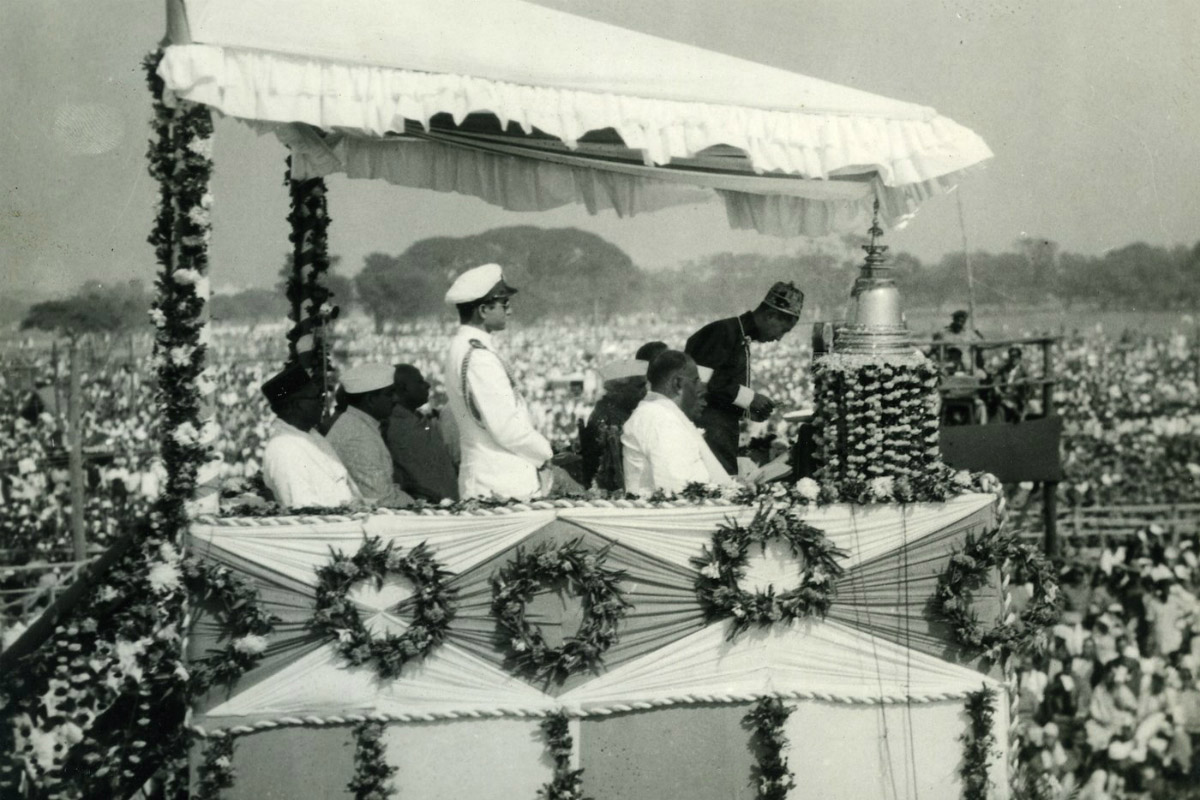 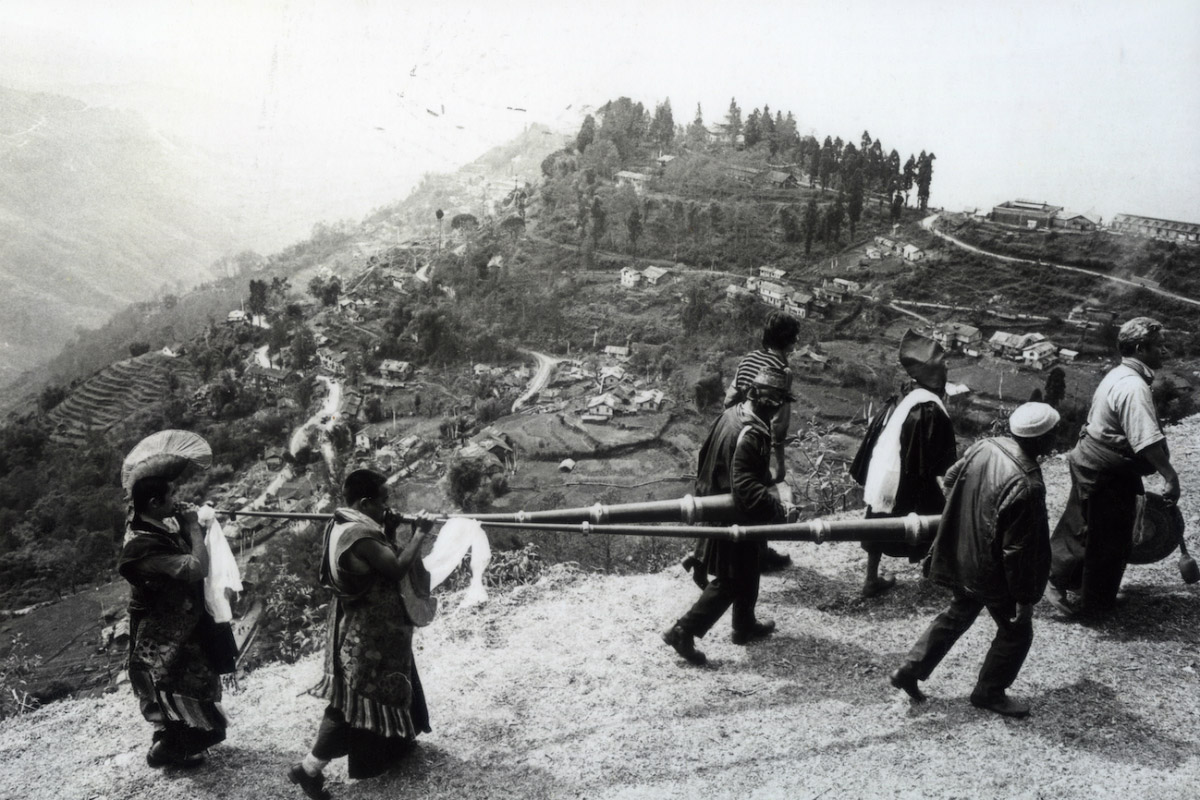 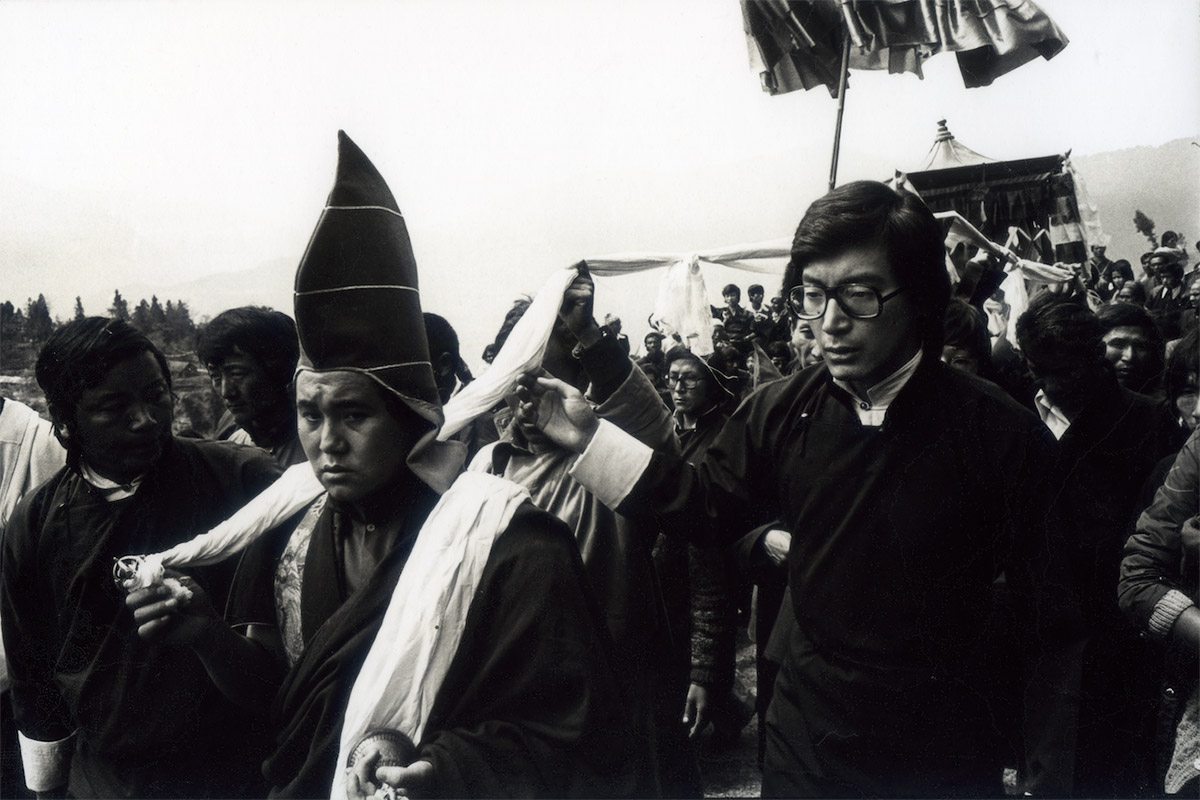 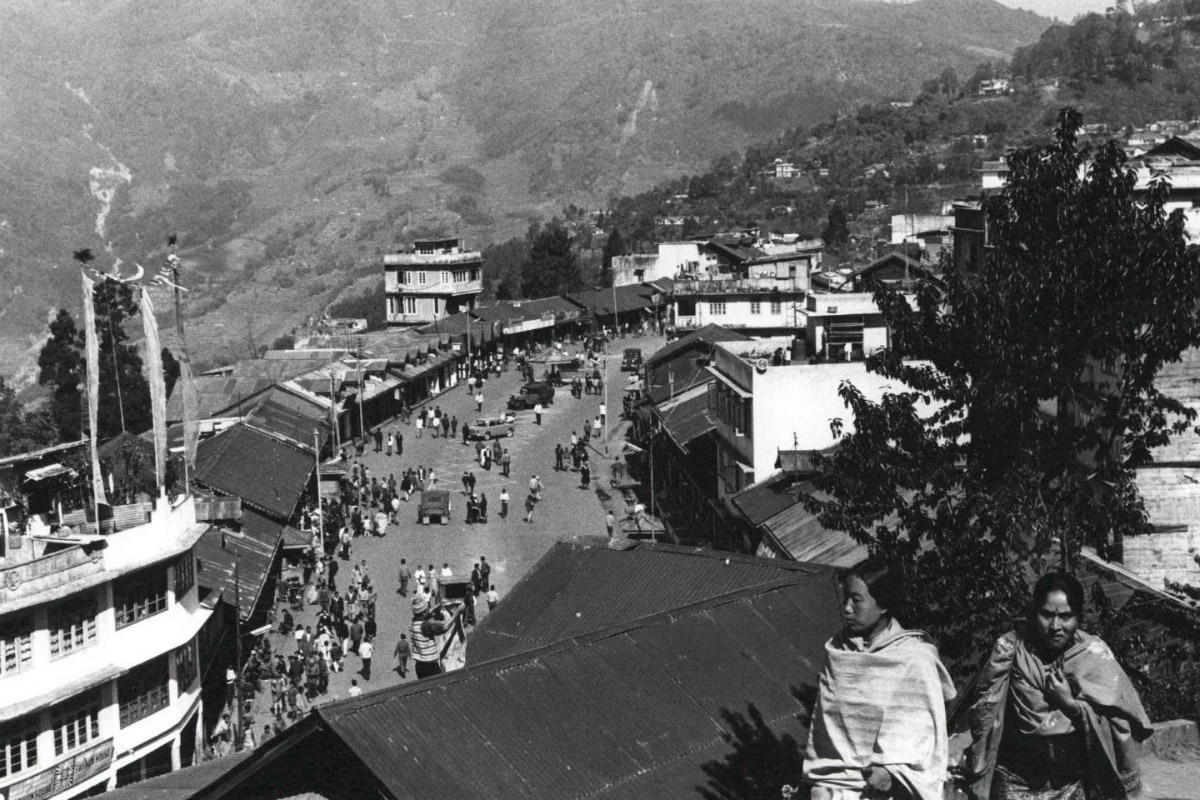 To strategically preserve the political, social, and cultural ties with Tibet, the Chogyals of Sikkim took their wives from the ranks of the Tibetan aristocracy. (Sikkimese princesses were often sent for marriage to Tibetan nobility, as well.) Here, the Tibetan wedding party of Princess Sangey Deki Samdo Phodrang arrives in Sikkim’s capital of Gangtok, ahead of her wedding to Crown Prince Palden Thondup Namgyal in August 1950.

Three years after annexation, in 1978, the Crown Prince Tenzing Kunzang Jigme Namgyal died when his car went over the edge on one of Gangtok’s narrow, steep roads. Here, schoolchildren pay respects to the Crown Prince, who was 26 at his death, during his funeral procession in 1978.

Indian Prime Minister Indira Gandhi walks with Chogyal Palden Thondup Namgyal on Lal Bazaar in Gangtok during a visit in 1968.

Sikkim Guards exercise on the Guards’ Ground in 1970.

The Sikkim Guards, a small fighting force of less than 300, exercise outside the old Palace in 1914.

Sir Tashi Namgyal succeeded his brother to become Sikkim’s 11th rule in 1914. His reign was characterized by socio-economic reforms, including the separation of executive and judicial powers, and the abolition of unpaid labor. Here, people sit for his coronation luncheon in 1914.

Buddhist monks play ceremonial instruments at the Tsuklakhang in 1973.

In 1953, Crown Prince Palden Thondup Namgyal was appointed as President of the Mahabodhi Society of India, a South Asian Buddhist organization. Here, the Crown Prince addresses a crowd in Bodhgaya, India, during the 1956 celebrations for Buddha Jayanti, which marks Buddha’s birthday.

Buddhist monks play ceremonial instruments in the funeral procession for the Crown Prince Tenzing as it winds its way up to Lukshyama, the royal cremation ground, in 1978.

A Buddhist monk, followed by Prince Wangchuk, lead the funeral procession of the late Crown Prince’s to Lukshyama, the royal cremation ground, in 1978.

People walk along the main artery, renamed Mahatma Gandhi Marg, in Gangtok in 1973. Gangtok, a quaint hill town with barely 15,000 inhabitants at the time, has now become a bustling tourist destination with a population of over 100,000.

On April 9, 1975, the Indian Army attacked and overran the Sikkim Guards, a small force of soldiers belonging to the kingdom of around 200,000. It was the latest in a series of maneuvers, by New Delhi, starting in 1973, that sought to integrate the tiny Himalayan nation, sandwiched between India and Tibet, into the union. The Sikkim Guards were quickly defeated and disbanded and the Chogyal, or Sikkimese monarch, was put under house arrest. Roughly one month later, it became official: On May 16, Sikkim was declared India’s 22nd State.

The annexation of Sikkim was the culmination of decades of uncertainty for the kingdom, which survived as an independent state throughout the British Raj period but faced tensions with a newly independent India. Throughout, however, Sikkim maintained its traditional character: Sikkimese culture — which draws heavily from Tibetan Buddhist traditions — is wholly distinct from the cultures of the broader subcontinent.

Yet, in the past few decades, successive waves of immigration from Nepal and India have eroded traditional practices and reduced the indigenous inhabitants to a minority in their own homeland. Meanwhile, Sikkim functions administratively as a state of India — the present-day Chogyal, while still revered by many, is not formally recognized by New Delhi. Forty years after annexation, only traces remain of this forgotten kingdom’s unique history and culture.

The following images are a selection of previously unpublished photographs from the private archives of the royal family of Sikkim. The collection, which dates back to 1875, includes glass-plate negatives, medium format negatives, and color and black and white slides taken by professional photographers, as well as members of the royal family. Culled from personal scrapbooks, albums, and diaries, the photographs — from family portraits to quotidian moments of palace life — document the trajectory of Sikkim from autonomous Himalayan kingdom to Indian state.

Pema Abrahams is a writer and researcher based in South Asia. She is working on a full photographic history of Sikkim 1875-1975 for publication in 2016.