For American Students in China, Some Risks, No Regrets

Life in the People's Republic can be trying — but for a young American, it's also transformative. FP surveys a rising generation of cross-cultural natives.

There was a time not long ago, before the normalization of diplomatic relations between the United States and China in 1979, when travel between the two countries was a rare, even astonishing act. For Americans, China was mostly something glimpsed across the border from the British colony of Hong Kong; the vast territory of the People’s Republic to its north was what scholar Orville Schell calls “terra incognita,” with an “air of mesmerizing impenetrability and unpossessability.” For Chinese, escaping Mao-era poverty and social controls to the unimaginable wealth of the United States was an all but impossible dream.

Fast-forward to today. For a growing number of global citizens, boarding a plane from New York bound for Beijing is only slightly more uncommon than flying to Houston or San Francisco. Among those who make the trans-Pacific journey, perhaps no group more deeply commands our attention than students in institutions of higher education. During the 2013-2014 academic year, over 274,000 Chinese students went Stateside to pursue higher education. In the 2012-2013 academic year, the last year for which U.S. statistics are available, over 14,000 American students did the reverse.

Certainly, no group is more poised to alter the trajectory of the U.S.-China relationship, one fraught with friction but also characterized by ever-proliferating contact points. Those who become fluent in both China and America — not just both languages, but both cultures, modes of doing business, and frameworks for interpreting the world — are likely to thrive in the new century as much-sought, and much needed, cross-cultural natives. But who are these people, how has their time abroad changed them, and what might their impact be both on the massive industry of higher education and, ultimately, the world’s most important bilateral relationship? In China U, a new series, Foreign Policy seeks to answer these questions. In the first entry, FP asks 343 Americans who have studied in China in degree or non-degree granting higher education programs to share their experiences. Highlights from those findings are below. 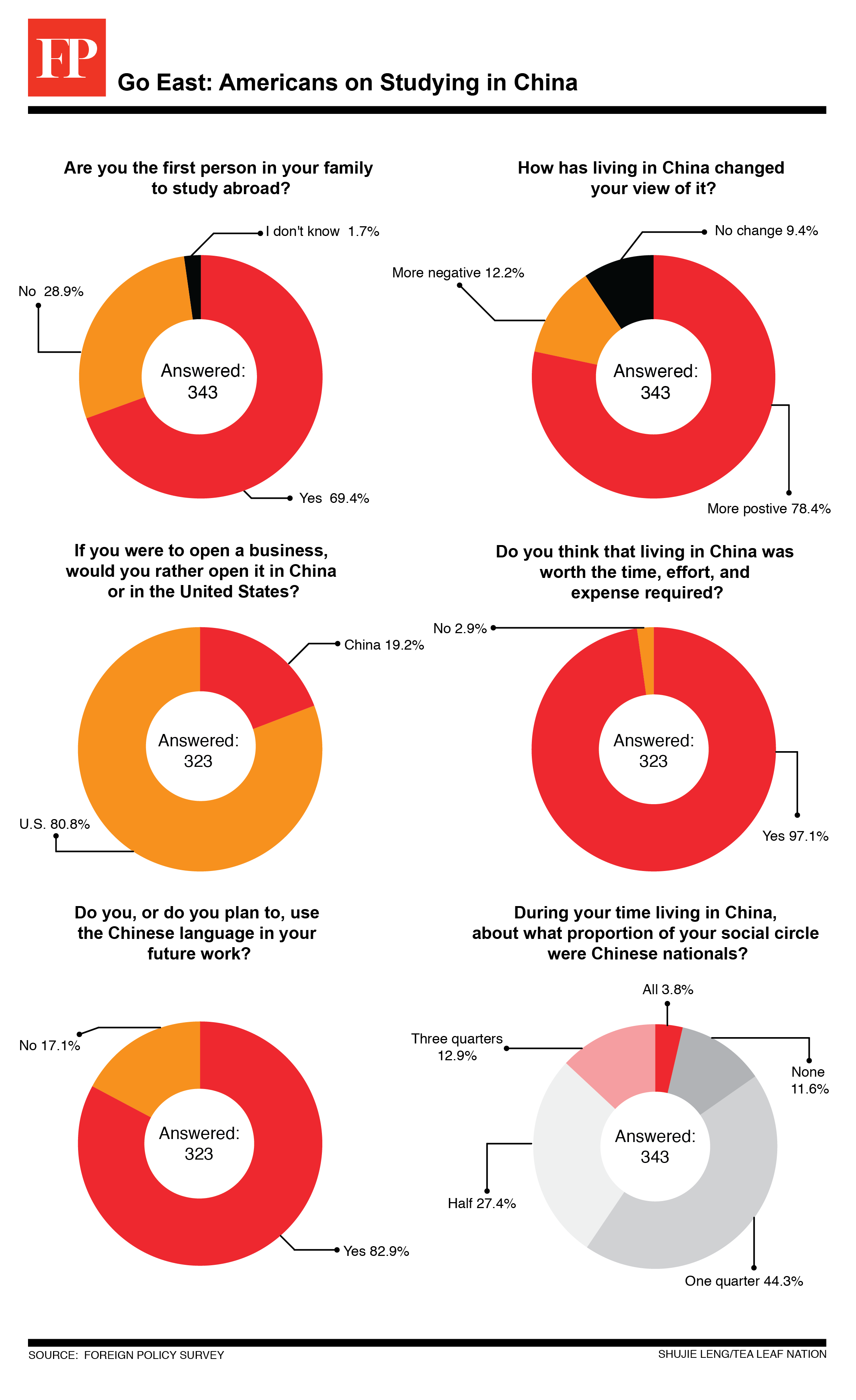 To compile results, FP reached out to 210 schools and not-for-profit organizations, who then distributed the survey to students and alumni who had previously participated in study abroad programs bringing students from the United States to China. Among respondents, Johns Hopkins University (and its Hopkins-Nanjing Center), the U.S. non-profit Council on International Education Exchange (CIEE), and Brigham Young University were the most represented U.S. sending institutions, while East China Normal University, Nanjing University, and Peking University were the most represented host institutions.

Of those surveyed, nearly 54 percent identified themselves as men; over 45 percent identified themselves as women. Almost 64 percent were between 18 and 24 years of age; over 20 percent were 25 to 29 years old, and only 4 percent were over 40. They were almost evenly split between current students and alumni. Nearly half said they could read a newspaper in Chinese. In most cases, answers did not differ materially along the axes of age, gender, language skill, or status as a student or alumni.

Most of those who responded to our survey were the first in their family to study abroad. Of 343 American respondents, 69.4 percent said they were the first to study in a foreign country, while 28.9 percent had family members who had studied abroad before: 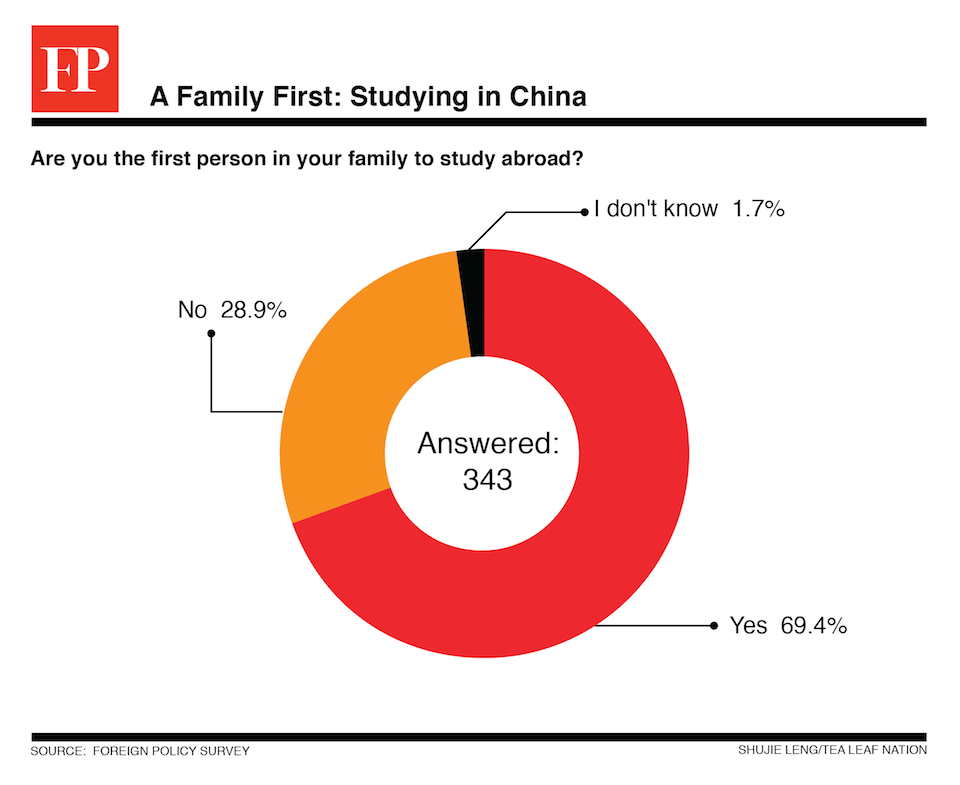 In other words, it would appear that the growing numbers of Americans studying in places like Beijing and Shanghai aren’t just the progeny of those who once studied in Paris or London.

Students in China made friends with Chinese people, but still tended to move in foreign circles. The picture for integration is mixed. While only 11.6 percent of respondents said they had no Chinese friends while living there, 55.9 percent responded that fewer than half of those in their friend circle were Chinese nationals, and only 3.8 percent said that all of their friends in China were host country nationals: 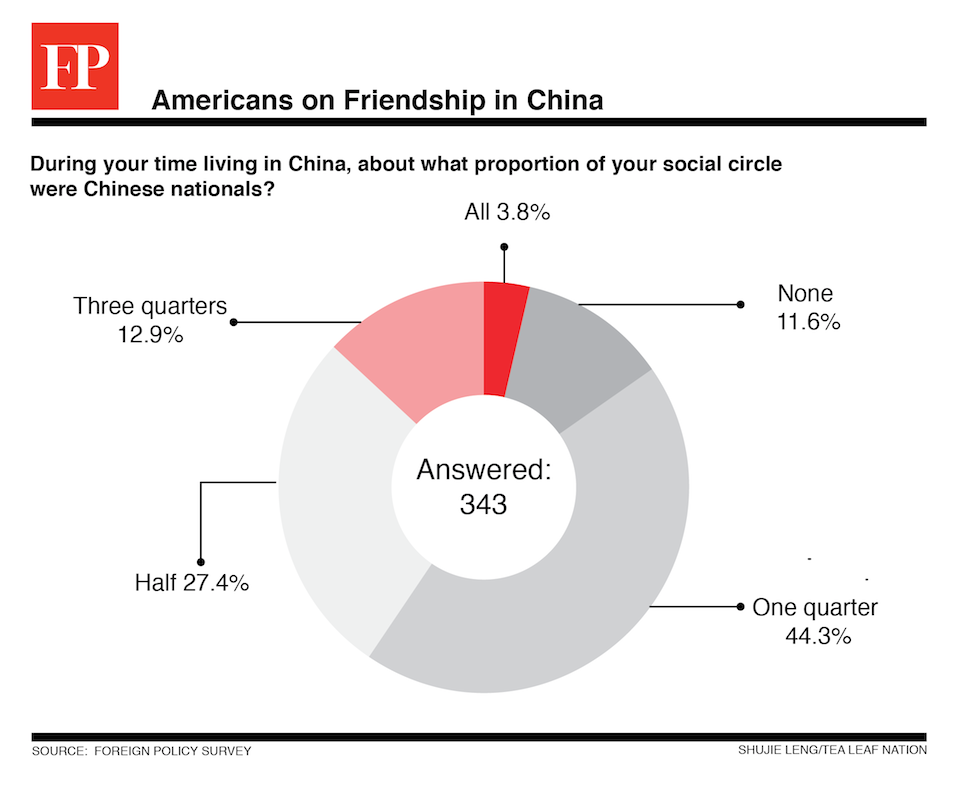 Those abroad for the first time were slightly more bi-culturally social, with 4 percent reporting that all of their friends in China were Chinese, and 47 percent responding that half or more than half of their friends were Chinese (versus 44.1 percent above). While the numbers fall short of full integration, the personal narratives evince many instances of pleasant surprise. Victor Zheng, now a senior at the University of Virginia who studied at East China Normal University in Shanghai in 2014, told FP that he’d expected to spend most of his time with American peers, but found himself “making local friends every day.” 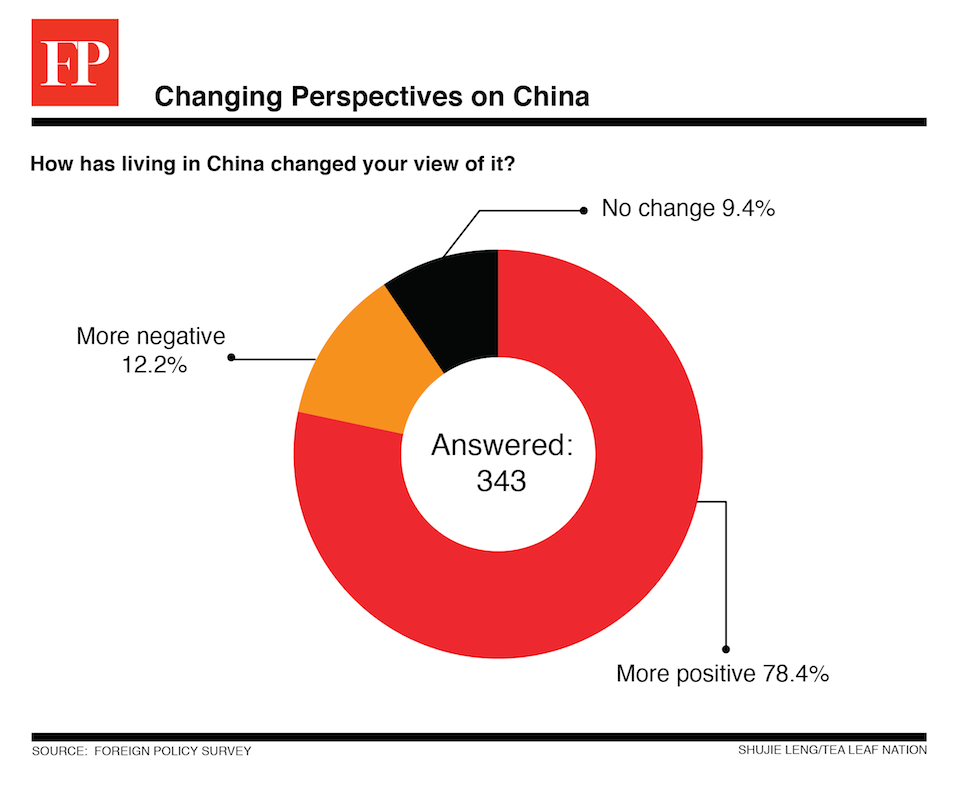 Many found the curiosity and hospitality of their hosts disarming. Multiple respondents described friendly and serendipitous encounters with curious Chinese — even, in some cases, when administrators or authorities had warned Chinese students on campus to keep a careful distance from foreigners. Respondents described making new friends or acquaintances everywhere — from a crowded train to a Starbucks to a monastery. Ashley Rivenbark, who studied in Hangzhou in 2014 through the U.S. State Department’s Critical Language Scholarship and now works at the World Affairs Council of Charlotte in North Carolina said, “The people of China are perhaps the most hospitable people in the world.”

None of this means respondents found living in China easy; quite the contrary. Chinese pollution can be nasty, and one student (who wished to remain anonymous) reported contracting cholera. A number of respondents described witnessing domestic violence on Chinese streets, with passersby doing nothing to intervene. Press censorship, a fact of life in China, chafed some there; Tawni Sasaki, currently a junior at Knox College in Galesburg, Illinois, who studied abroad at Peking University in Beijing, said she was “shocked to find out the volume of information that I missed” upon returning home.

Then there’s the Chinese language, which the Foreign Service Institute has classified as among the most difficult for an American to master. Greg Levin, a consultant in the Bay Area who studied at the Hopkins-Nanjing Center, called Chinese “a very difficult language to learn,” and one that “never truly loves you back.” Even for those determined to master the language and integrate culturally, the challenges are steep in a country that tends to conflate nationality and race. Americans of Chinese origin say they were regularly expected to have mastered Mandarin, despite not having grown up in China. And Americans of other ethnic backgrounds were treated with curiosity, but it was clear they would never be treated as Chinese. Rachel Deason, a University of North Carolina at Chapel Hill graduate who studied at Sun Yat-sen University and plans to move to Shanghai this year, called it “unsettling to think that the country I am devoting my studies and life to will never fully accept me as one of its own.”

Enthusiasm for working in China and using Chinese is high — but less so after life intervenes. Overall, 49 percent said they either currently work in China, or plan to work there after school. And over 82 percent say they use, or plan to use, the Chinese language in their work. But in both cases, those who had left school were far less likely to answer affirmatively, with only 31 percent saying they work or plan to work in China, versus 67 percent of current students: 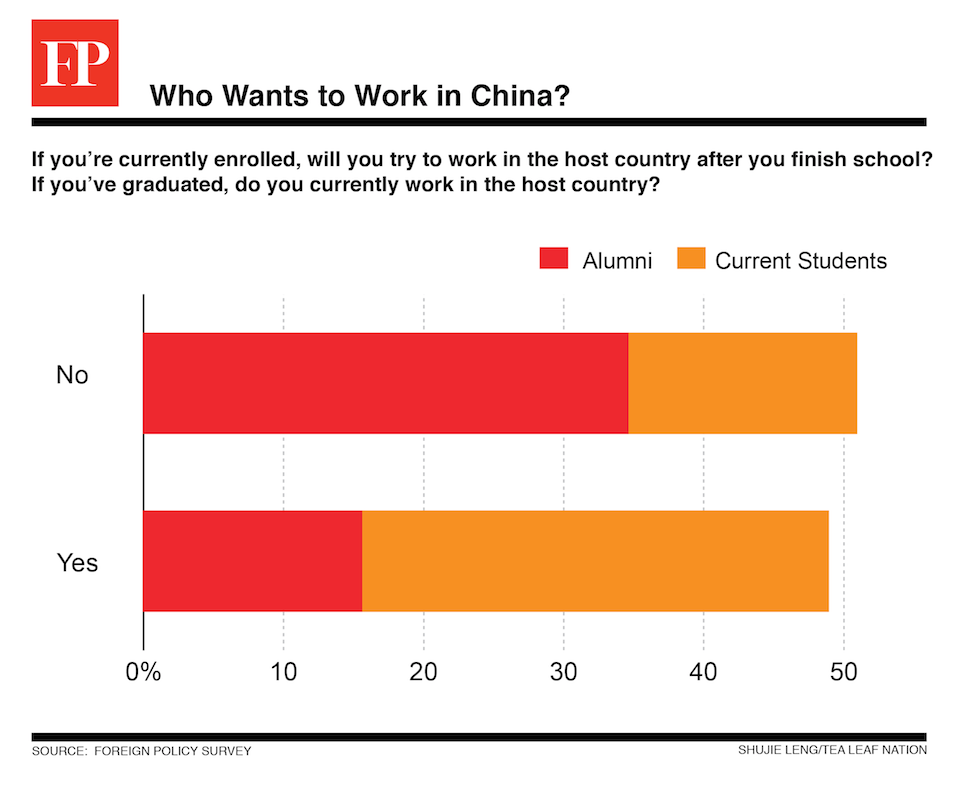 It’s possible that the initial ardor to pursue work in China cools once students return stateside and learn both of the opportunities that await them at home, and the real-life constraints and risks inherent in working abroad.

American students didn’t emerge bullish on starting a business in China. Rather than asking for direct opinions on China’s economy — a giant, complex system on which it’s hard for even experts to agree — we asked respondents where they would open a business if they had to choose. With China’s dizzying GDP growth rate — which has averaged over 9 percent annually over the past quarter century — the country has often been depicted as a land of milk and honey for expats with the right language skills. But that does not mean respondents perceived it as an ideal place to start a business; at least, not yet: 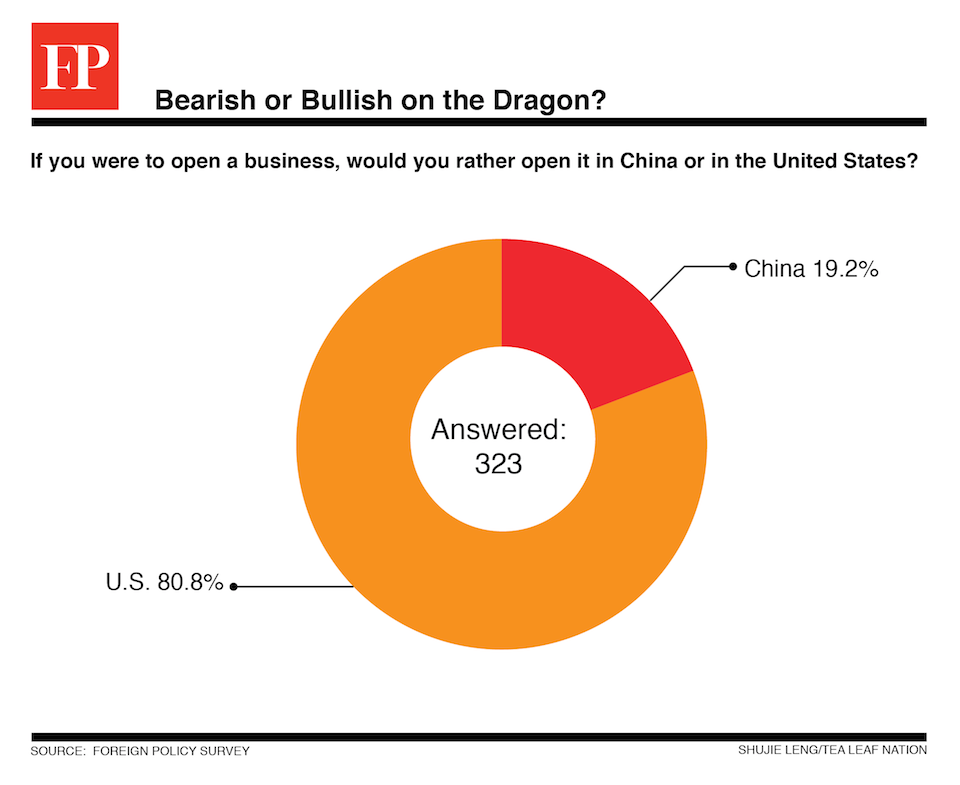 As Chinese authorities try to create a cozy home for entrepreneurs, those numbers may shift. For now, the risks of starting a business in a foreign country with a suspect legal regime and a reputation for copying instead of innovating struck most respondents as too great.

Studying in China was almost always worth it. We asked students and alumni whether they thought that living in China “was worth the time, effort, and expense required.” A whopping 97.1 percent of respondents answered in the affirmative: 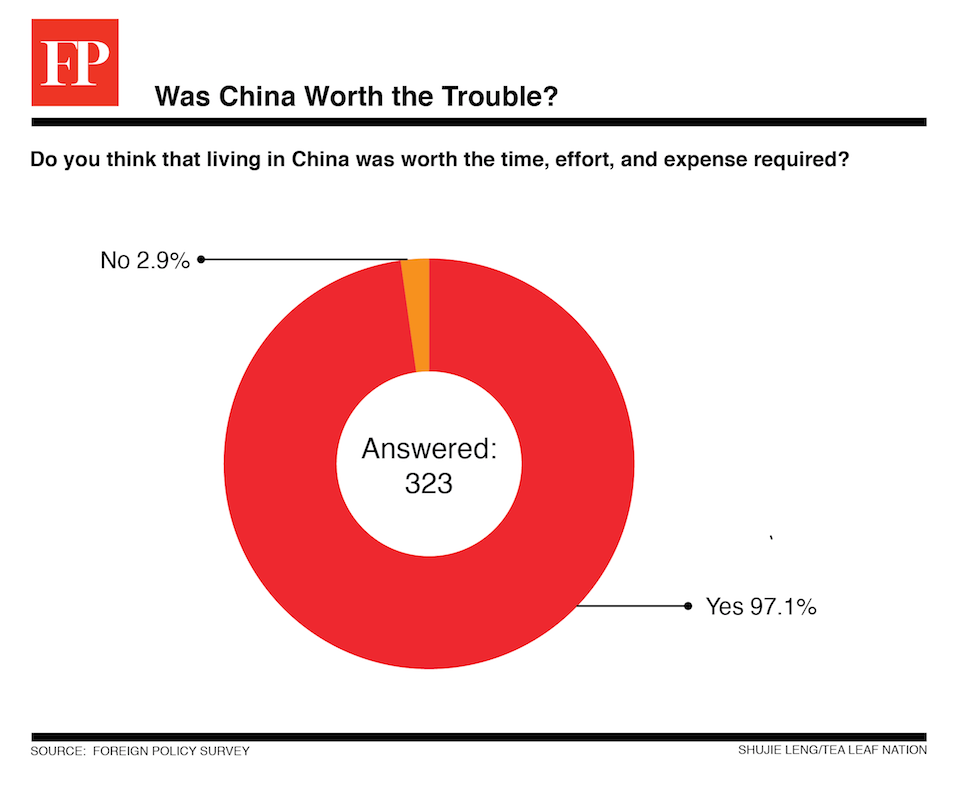 Flexibility and adaptability are at a premium in China. Virginia Hawkins Scharf lives with her husband in a hutong, or traditional alleyway, in Beijing. She reported that her husband once found himself routinely awoken by a neighbor’s rooster, until conceiving of the idea to ask his housekeeper to purchase it for $30. (It’s unknown what fate ultimately befell the rooster.) Anne Rebull, now a Ph.D. candidate at the University of Chicago and formerly a student at Tsinghua University through the Inter-University Program there, said that while taking in a performance of traditional Beijing opera, she watched as a McDonald’s deliveryman with a motorcycle helmet and red and yellow suit dropped off an insulated bag of food for puckish audience members in the middle of the show. And then there’s Michael Pareles, a current MBA student at Wharton who found himself in China as a Fulbright Scholar in 2008. He was slated to perform research in the western Chinese region of Xinjiang, until riots in the neighboring region of Tibet convinced jumpy authorities to spike Pareles’ plans. Instead, he turned his energies to coaching a team of ethnically Chinese-Kazakh students from Xinjiang studying in Beijing. The team was called Air Kazakh, and with Pareles as coach, it won the 2008 Chinese National Ultimate Frisbee Championship. All four answered they thought their time in China was worth the time, effort, and expense involved.

Of course, none of these findings are conclusive. FP relied on schools, non-profits, and alumni associations to share our survey, and respondents were entirely self-selecting. At the very least, that makes it likely that respondents felt more strongly about their time in China than the overall population of Americans who have studied in China. Yet as a group, survey respondents were diverse, and the overwhelming sentiment that the trip to China was worth the trouble is likely broadly indicative. So is the increased positive sentiment among those who made the trek.

And beneath the U.S.-China interaction lurks certain fundamental similarities.  FP’s survey also welcomed non-American respondents, and while their answers are not analyzed in this article, one narrative stood out. Lara Coebergh, a Dutch student attending the CIEE summer course in 2012 at East China Normal University, wrote that Americans and Chinese shared a highly social dormitory culture and a fervor for campus sports, neither familiar to her. During the 2012 Summer Olympic Games, Coebergh writes, “American and Chinese students seemed to amalgamate through a common love for basketball. I, on the other hand, had to watch Dutch gymnast and local hero Epke Zonderland winning the Gold medal doing the first triple Cassina-Kovacs-Kolman combination in history on my own, somewhere in a hallway with a grumpy Chinese guard, who was nice enough to switch channels for a few minutes.” Coebergh told FP, “I expected to easily spot the cultural differences while getting to know both groups. In reality, I was actually struck by the similarities” between the two, even as both groups remained “oblivious” to their many shared characteristics. “American academic culture,” she wrote, “has touched the Chinese student life at its core.”

Can Kamala Harris Resurrect the Alliance for Prosperity—With Thugs?

Robert Menendez Is the Last Hawk on the Left