Despite Tom’s mocking, Michael Morell’s book on the GWoT is worth the money

When Michael Morell was just another kid in high school in Ohio, he thought nothing of the Central Intelligence Agency. 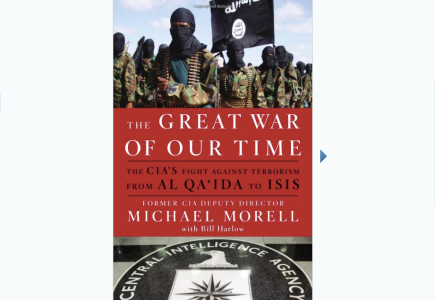 When Michael Morell was just another kid in high school in Ohio, he thought nothing of the Central Intelligence Agency. An economics major in college, he wanted to eventually to go graduate school, earn his PhD, and become a member of academia. “I lived at home during college,” Morell writes, “never traveled overseas, and did not speak a foreign language.” Why, he asked, would he even consider applying for a job at the world’s most renowned intelligence agency?

That all changed when one of Morell’s college professors encouraged him to send over a resume to the Agency. At that time, in 1980, the Cold War competition between the United States and the Soviet Union was at a high burn: Central America was transforming into one of the most violent and strategic areas for U.S. foreign policy; the Soviet Union recently launched a full-on invasion of Afghanistan to prop up a communist-led government in Kabul; and a critical U.S. ally in the Shah of Iran found himself deposed by an Islamic revolution sponsored by a little-known ayatollah named Ruhollah Khomeini. “It [the CIA] needed young men and women to help unravel some enormously complex issues,” Morell writes. So he sent over an application thinking that it would simply disappear into the paper shredder.

To his surprise, the CIA contacted him a few months later for an interview — one that happened to change his young professional life. Thirty-three years later, Michael Morell retired with one of the most impressive resumes that a member of the Agency could even dream of: executive assistant to the Director of the CIA, personal intelligence briefer to the President of the United States, Director of the Directorate of Intelligence, Deputy Director of the entire Agency, and twice Acting Director.

Morell recounts all of these experiences in his recently released book, The Great War of Our Time: The CIA’s Fight Against Terrorism from Al Qa’ida to ISIS — a title that describes well most of the book is about. Indeed, Morell is well-positioned to recount the transformation of Islamic terrorism over the past twenty years. In addition to focusing on Al-Qai’da for most of his professional tenure at the CIA, he was with President Bush on the morning of September 11, 2001, when history thrust him into one of the most important players during America’s darkest day since the Japanese attack on Pearl Harbor.

The Great War of Our Time, however, is more than just a memoir, where the author reminisces about co-workers, bosses, and the big decisions that had to be made during difficult and gut-wrenching times (although there is certainly a lot of this in the book). Morell takes it a considerable step further by refusing to shy away from the hot-button issues that currently dominate the political atmosphere in Washington, from the controversial “torture report” issued by the Senate Intelligence Committee’s Democratic staff and the unfolding debate over the National Security Agency’s telephone metadata program to the never-ending story about the Benghazi terrorist attacks — an event that he spends a whopping 48 pages on. The former Acting Director tries to set the record straight on all of these issues, all of which will continue to be discussed in the upcoming presidential election season.

The whole book is worth a thorough and close read, but for a taste of what you’re money would buy, here are some especially revealing excerpts:

On George Tenet: “[T]he most down-to-earth, approachable senior government official I have ever met.” (pp. 7)

On being Bush’s personal intelligence briefer: “He treated me with respect and affection—like a member of his family, like a son. Before briefings at his ranch in Crawford, we would have cereal together, talk about the previous night’s baseball games, and wash and dry the breakfast dishes together.” (p.31)

On almost being framed for the August 8 PDB controversy: “It became clear to me that as the political sharks circled the White House, some thought was being given to tossing me—and therefore the CIA—over the side. Fortunately…the idea of pinning responsibility on CIA and me did not gain traction at the more senior levels of the White House.” (pp. 72)

On VP Cheney’s office making the case for the Iraq war: “The degree of analysis being done by political appointees was unprecedented in my career. Officials in the vice president’s office were trying to be both the analysts and the policy-makers.” (pp. 95)

On drones: “Are we better off as a country dealing with that threat [an eminent terrorist attack] by using unmanned aerial vehicles where no US servicemen or servicewomen are put in peril, or by putting US boots on the ground and therefore at risk? I think the answer is any easy one.” (pp. 141)

On Muammar al-Qadhafi: “Qadhafi hated and feared al Qa’ida as much as we did. Since a number of top leaders of bin Laden’s organization were Libyans, his assistance proved quite useful.” (pp. 188)

On the Benghazi talking points: “The OCA [Office of Congressional Affairs] and OPA [Office of Public Affairs] staffers went well beyond their expertise and responsibilities by editing the points. The officers in these two staffs made a number of changes to the draft, including changing attacks to demonstrations…The group of Public Affairs and Congressional Affairs officials also deleted the phrase “with ties to al Qa’ida.” (pp. 221-222)

On the SSCI study on enhanced interrogation techniques: “I believe that the SSCI staff that produced the committee’s study did a great disservice to the committee, the Central Intelligence Agency, and the country. It appears to me that the staffers wrote the report that they thought their political masters wanted to see.” (pp. 263)

On Edward Snowden, the media and the NSA: “The final cause of the Snowden affair was the failure of some in the media to accurately describe what they were seeing in the Snowden documents. Many of them went to the darkest corner of the room, and it had political impact. This was sloppy reporting.” (pp. 288)

Daniel R. DePetris is a Middle East analyst at Wikistrat Inc., and a private consultant.

Thomas E. Ricks covered the U.S. military from 1991 to 2008 for the Wall Street Journal and then the Washington Post. He can be reached at ricksblogcomment@gmail.com. Twitter: @tomricks1
View
Comments
Tags: books, Military