Sorry, Fareed: Saudi Arabia Can Build a Bomb Any Damn Time It Wants To

Why do we think it’s so hard for a non-European country to acquire a 70-year-old technology?

Fareed Zakaria has written a predictably buzzy article suggesting that, whatever Saudi officials might say, Riyadh is simply too backward to build a nuclear weapon. “Whatever happens with Iran’s nuclear program,” Zakaria writes, “10 years from now Saudi Arabia won’t have nuclear weapons. Because it can’t.”

Zakaria isn’t explicit about what he believes to be the technical requirements for building a nuclear weapon, but he clearly thinks it is hard. Which was probably true in 1945 when the United States demonstrated two different routes to atomic weapons. Since then, however, the technologies associated with producing plutonium and highly enriched uranium have been developed, put to civilian use, and spread around the globe. The fact that most states don’t build nuclear weapons has a lot more to do with restraint than not being able to figure it out.

First, automobile production is a terrible indicator of whether a state can build a nuclear weapon. The technologies are really not at all similar — or at least they don’t have to be. India, Pakistan, and North Korea all succeeded in building nuclear weapons despite not having much of an auto industry at home. And the Soviets were really good at building nuclear weapons, even though their cars famously sucked.

And, anyway, Saudi Arabia is investing in a domestic auto industry. The Ministry of Commerce and Industry is hoping the Meeya will be on the market by 2017. So, there’s that.

More importantly, Saudi Arabia is investing in a civil nuclear industry. “Where would Saudi Arabia train the scientists to work on its secret program?” Zakaria wonders. Oh, I don’t know, how about the King Abdullah City for Atomic and Renewable Energy? Somehow Zakaria never mentions that Saudi Arabia is building a dedicated city for training nuclear scientists. I can’t predict whether this investment will pay off, but then again neither can Zakaria — if he even knows it exists.

Zakaria is also skeptical because, he writes, Saudi Arabia “ranks 73rd in the quality of its math and science education, according to the World Economic Forum — abysmally low for a rich country. Iran, despite 36 years of sanctions and a much lower per capita GDP, fares far better at 44.”

Abysmally low for a rich country? Perhaps. But for a nuclear weapons state? Not nearly. Let’s do what he should have done and make a little table using his own data. Here is a list of selected countries — in bold if they currently possess nuclear weapons — by “Quality of Math and Science Education.” (Again, this is his data. Don’t blame me!)

Select Countries, Ranked by Quality of Math and Science Education

Using Zakaria’s own measure, Saudi Arabia would hardly be the least nerdy country to acquire a nuclear weapon. Now, obviously I’d prefer to have historical data. But I strongly suspect that China’s and India’s rankings weren’t nearly so high in 1964 and 1974 when they conducted their first nuclear tests. The point is this: You don’t need to be a rich country, or have a great education system, to build a bomb.

This should be no surprise. Did I mention that we just celebrated the 70th anniversary of the first nuclear explosion, Trinity? Seventy years. What other 70-year-old technology do we believe remains impossible for non-European countries to acquire, even after several have done so? You know what else was invented in the 1940s? Microwave ovens, solid-body electric guitars, and the Slinky.

I don’t mean “acquire” in terms of buying a nuclear weapon off the shelf — I agree with Zakaria that is a nutty idea. And I don’t mean purchasing a turn-key infrastructure to produce plutonium, as Syria did from North Korea, or highly enriched uranium as Libya did from Pakistan’s A.Q. Khan. No, I mean building a bomb from scratch. The fancy machine tools, materials, and components that were good enough to build the nuclear weapons of the 1970s are widely available now. My favorite example is that one of the machine tools linked to the A.Q. Khan network was a used Denn machine tool. If you go to the Denn website, they tell you what their machine tools can be used for: everything from armaments to kitchenware. And, be still Fareed Zakaria’s fluttering heart, auto parts. (Flow forming machines make sweet rims.) Talk about dual use!

The United States was deeply skeptical that Pakistan could build centrifuges in the 1970s because of the country’s limited industrial base. What U.S. analysts didn’t grasp was that Pakistan’s industrial base — and that of every other proliferator — was the entire world. There is no reason to think this problem went away with A.Q. Khan. Take a spin around Alibaba, the big Chinese online B2B procurement site sometime.

Moreover, a proliferator doesn’t have to try to acquire the most modern centrifuges. When U.N. inspectors were stumbling across the remnants of the Iraqi nuclear program in the early 1990s, they made a surprising discovery: Calutrons. These were an obsolete uranium enrichment technology (electromagnetic isotope separation) from the 1940s that fell out of favor after World War II. Inefficient, sure, but good enough to make the highly enriched uranium for the Little Boy bomb that destroyed Hiroshima.

Frankly, we’re lucky that nuclear weapons have not spread as quickly as the technology to make them. Some of the success in slowing the spread of nuclear weapons is down to sanctions, export controls, and the occasional air strike. Most of the success, however, goes to the regime that discourages states that could build nuclear weapons from doing so in the first place.

If you ask a policy wonk whether the nonproliferation regime has been successful or not, the chances are better than even that you’ll hear about President John F. Kennedy’s famous warning that “I see the possibility in the 1970s of the President of the United States having to face a world in which 15 or 20 or 25 nations may have these weapons.” (It’s kind of a standard talking point we all learn early on.)

That didn’t happen — and credit usually goes to the 1970 Nuclear Non-Proliferation Treaty (NPT). To see why, look at the countries that were in Kennedy’s list of 15, 20, or 25 nuclear-armed states. Kennedy’s estimate came from a 1963 briefing paper provided by Secretary of Defense Robert McNamara that is now declassified. Here is McNamara’s chart: 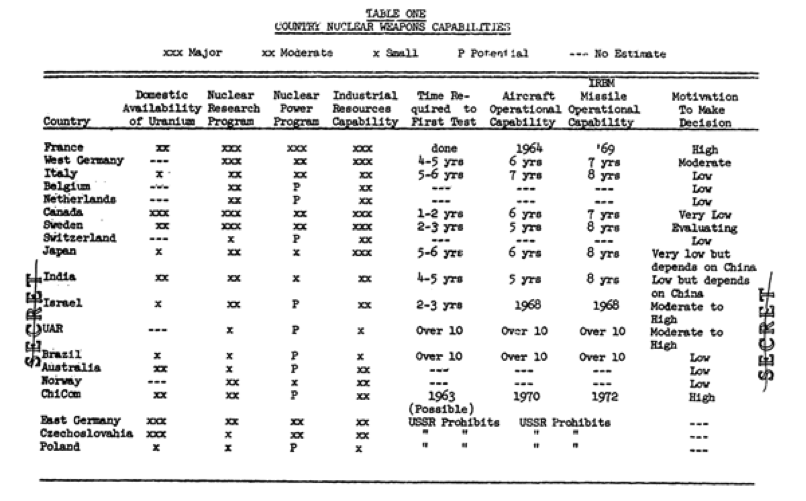 Look at those names. They aren’t rogue states, but rather a list of the world’s relatively industrialized countries, along with a few developing regional powers like China and the UAR (The United Arab Republic was a brief political union of Egypt and Syria). The working assumption behind Kennedy’s estimate was that any state that could build nuclear weapons probably would. That’s because, before the NPT, nuclear weapons were seen by many people as just another weapon, part of any modern military’s future arsenal. In fact, virtually all the non-Warsaw Pact countries on this list seriously considered a nuclear weapons program. Australia, Sweden, and Switzerland all had active nuclear weapons programs.

The NPT helped changed that. (In the case of Australia, Jim Walsh has written a particularly compelling account of the role played by the NPT in constraining Canberra’s nuclear aspirations.) Treaties are absolutely necessary. It is simply not possible to sustain a nearly universal regime through technology denial and military action. The regime depends on the vast majority of states choosing compliance, allowing the international community to focus its enforcement efforts on a small number of hard cases like North Korea and Iran.

The nonproliferation regime can only function with the support of those states that can build nuclear weapons, but choose not to — states like Saudi Arabia. The Saudis are clearly alarmed by the possibility of an Iranian nuclear weapon. While I suspect that a lot of the talk about acquiring nuclear weapons is intended to make the United States focus on Saudi security concerns, it doesn’t help to dismiss Riyadh’s anxieties by mocking their educational system and ability to go nuclear.

Rather, we need to focus on making sure the nonproliferation regime works for Saudi Arabia and other states. That means closer consultations on regional defense issues, expanded security arrangements, and crucially an attempt to head off an Iranian bomb with a negotiated settlement. Fareed Zakaria may well win his bet that the Saudis will not have a bomb in 10 years, but it’s not because they can’t have one. If he wins — and I hope he does — it’s because the United States and other powers have successfully addressed Iran’s nuclear program and the regional security issues that would push Riyadh toward a bomb. And who knows, maybe in 10 years we’ll all be driving Meeyas.